'I want my family to eat': The children fuelling Myanmar's economic boom

HMAWBI, Yangon Region — Fourteen-year-old Ko San Min Hteik had worked at the steel factory for less than a week when his hand got caught in a machine, a casualty of the economic boom driving more children into Myanmar’s factories.

Two of his fingers were lost after the rod-cutter sliced them down to the bone and weeks later doctors are still unsure whether they will be able to save the others.

He is one of thousands of young factory workers fuelling Myanmar’s rapid growth as foreign investors pile into the country after the end of half a century of military-governed isolation.

With one in five kids aged 10-17 in work, Myanmar is one of the worst countries in the world for child labour.

Many support their families sweeping shop floors, serving in tea shops or working as domestic helpers.

Others labour in the increasing number of foreign-owned factories that has made Myanmar one of the fastest-expanding economies in the region, with growth expected to average about seven percent in the coming years.

“I cannot do what I want to do, so I feel depressed,” San Min Hteik told AFP, staring at his bandaged hand inside his home in Hmawbi Township.

He was paid 2.5 million kyats (US$1,800) by the Chinese-owned 999 Iron processing plant in the Myaung Dagar industrial zone as a settlement for his injury.

His mother Daw Tin Tin Htay said they took the money to pay for his medical bills and to make sure his two siblings could stay in school.

“When we were given the cash I felt sad, as if we were buying my son’s hand with this money,” she said.

AFP journalists were unable to enter the 999 Iron processing plant when they visited. An employee reached by phone they said no one was available to comment.

“We have no stomach to ask them not to send their children to work. They have their difficulties,” he said.

Legally children can start working at 14 in Myanmar, although they are meant to be restricted to four hours a day and are barred from hazardous industries.

But experts say there is little awareness of the laws and many children are sent to work even younger in a country where one in four people live below the poverty line.

The issue is problematic for reputation-conscious Western companies looking to take advantage of Myanmar’s cheap labour — the minimum wage is equivalent to around 33 cents an hour, below Thailand, Cambodia, China and Indonesia.

Ma Zinmar is just one of many young girls and boys in Myanmar who used fake documents to circumvent the law and land a factory job at age 12, washing and ironing clothes for eight hours a day.

But the owners cut her shifts in half once they found out her real age.

“I want to work full-time like before,” said the now 14-year-old, who asked AFP to use a different name to protect her identity.

“I can work a full day because I am healthy but the law doesn’t allow me.”

“I left this factory to search for a new job, but I could not find any as I was underage and had to come back,” said the now 15-year-old.

“I want to go to back to school but it’s not possible, so I still work. My dream is to be a clothes designer.”

A spokeswoman for H&M said the company was working with suppliers and industry experts to ensure young workers are employed according to the law and treated with “respect”.

Selim Benaissa from the International Labour Organisation said children working outside factories often end up in more dangerous jobs, such as rubbish collecting or sex work.

“Children will work anyway … this is something that is totally accepted, even by the children,” he said.

“Removing children from a workplace without appropriate support and follow up may push them to more exploitative or hazardous forms of child labour.” 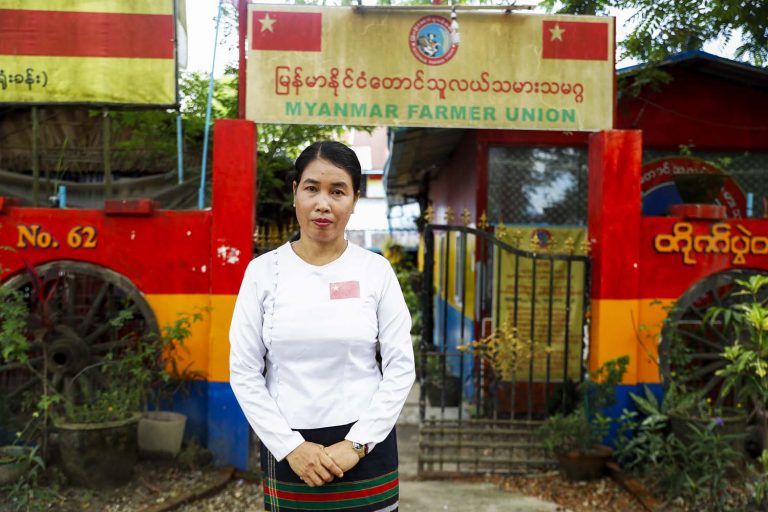 From the factory floor to the hluttaw

Frustrated by a lack of reform, 11 activists are competing as independents in the election on behalf of workers and farmers.
BY Frontier