Young men and women with the potential to shine at sport are spurning opportunities to train for national teams and represent Myanmar abroad because of the meagre salaries on offer.

WHEN MYANMAR defeated Vietnam to win the women’s sepak takraw final at the 1998 Asian Games it was its first gold medal at the event since 1974.

It was also the only gold medal Myanmar won at the 1998 Asian Games, held in Bangkok, and it marked the start of a satisfying series of victories for the national sepak takraw team: it has won 23 medals at the five Asian Games since 1998.

Despite this sustained success, few young people are interested in joining the national team. It’s a disappointment for U Htut Khaing Nwe, secretary of the Myanmar Sepak Takraw Federation.

“Sepak takraw is the most popular sport after football in Myanmar, but it’s very difficult to gain national-level players,” he told Frontier. 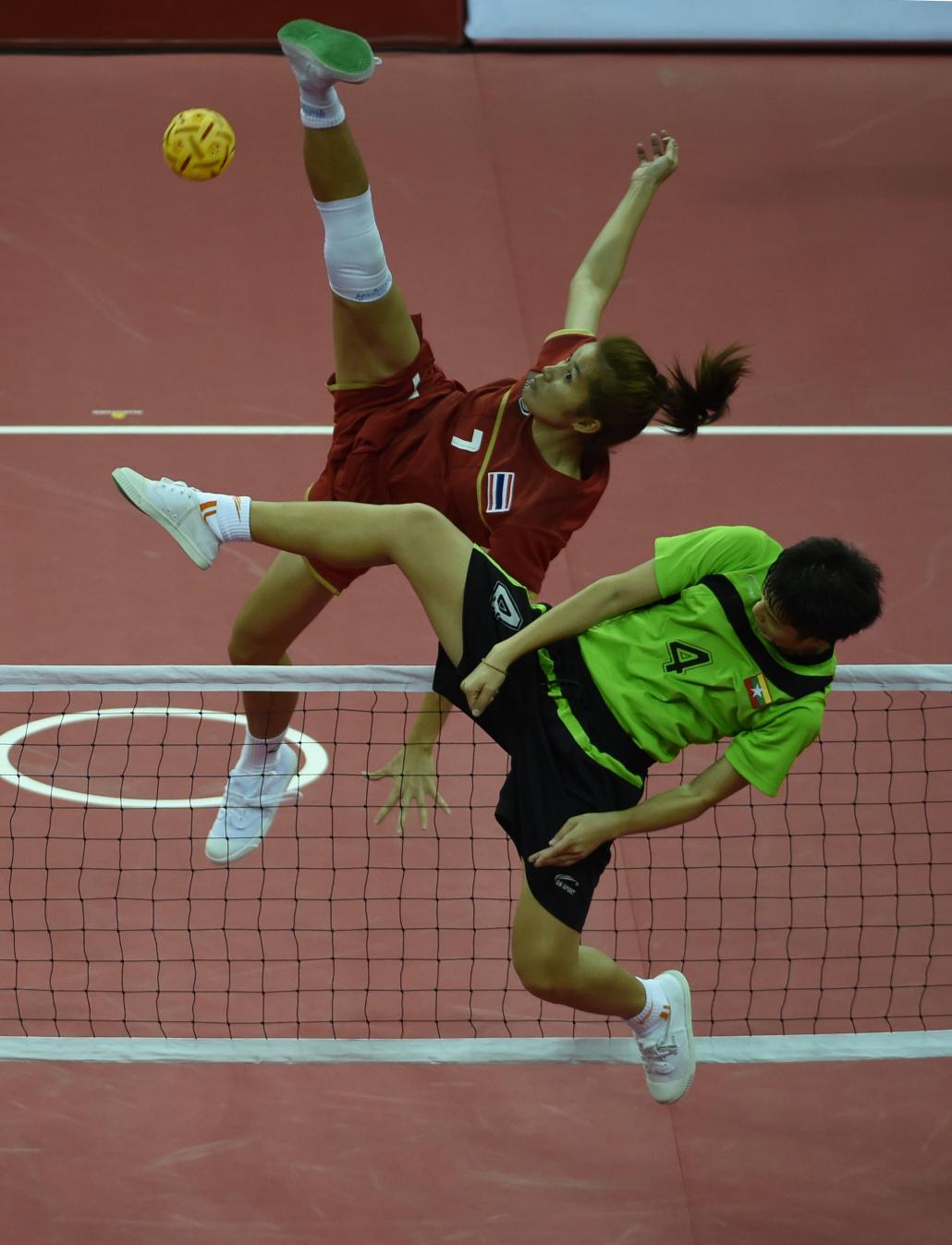 Attracting young people is a challenge for most sporting organistions in Myanmar. They say the main reason is that most young people are not interested in pursuing a career in sport.

Htut Khaing Nwe said many talented young athletes were not interested in making a living from sport because of low incomes. 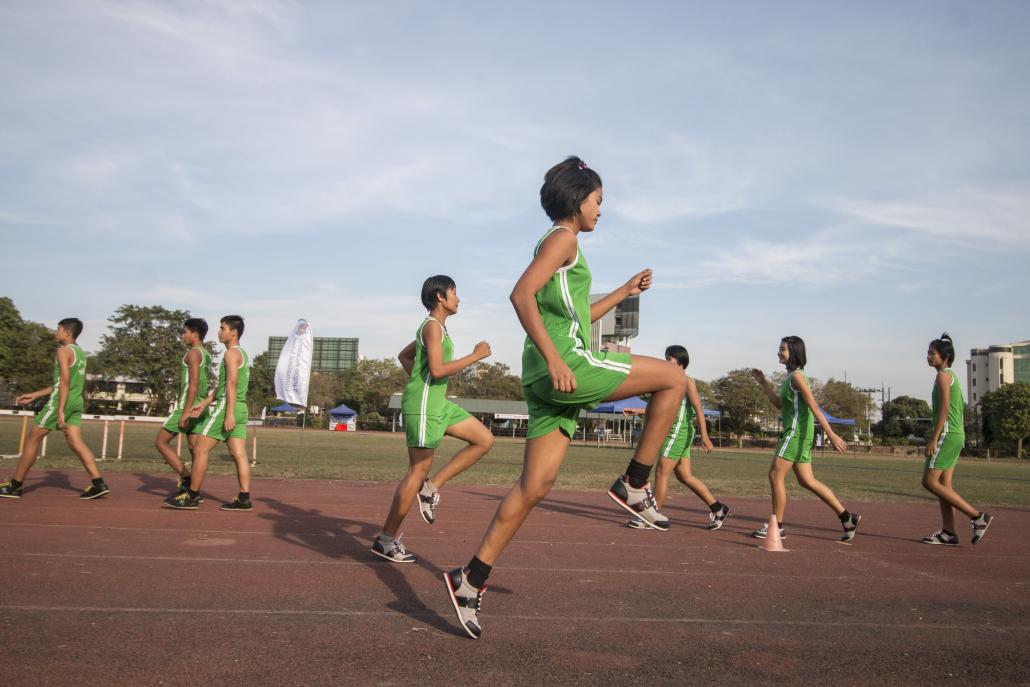 The middle class, in particular, was not interested in sport as a career, he said; most of those who play professionally are rich or poor.

“Some sportspeople go on playing because of their love for sport,” Htut Khaing Nwe said. “Mostly, only two social classes, the rich and the poor, take part in sport. The rich play sport because it’s their hobby, not to earn income. The poor, however, play sport only to make a living.”

With the exception of footballers, it is difficult to survive as a professional sportsperson in Myanmar. Footballers earned low incomes until they were boosted after the Myanmar National League was formed in 2009 by the tycoon U Zaw Zaw, who as head of the Myanmar Football Federation has been a driving force behind the game.

The creation of a professional league, as well as clubs backed by Zaw Zaw and the other wealthy businesspeople, enabled players to earn a decent living. Some Myanmar footballers are playing overseas and one is said to be earning at least US$7,000 (about K9.2 million) a month.

Sport federations that have not turned professional are targeting soldiers and public servants to recruit national-level players. About 90 percent of the national hockey team serve in the Tatmadaw and about the same percentage of the national sepak takraw team are from the public service. 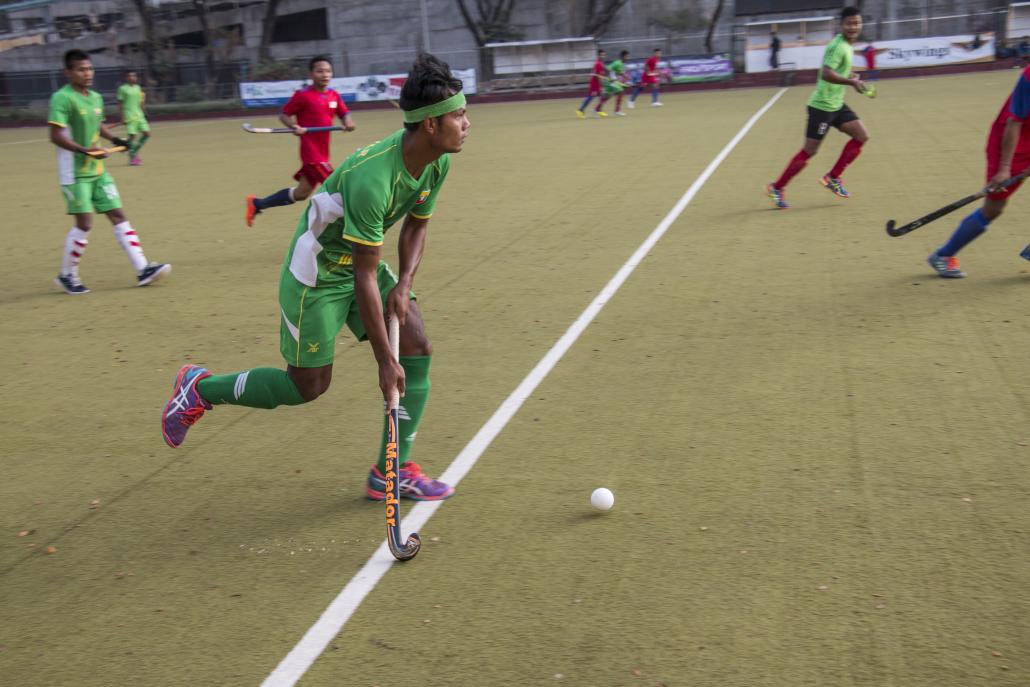 Because so few people are interested in pursuing a sports career, 90 percent of the national hockey team is drawn from the Tatmadaw. (Nyein Su Wai Kyaw Soe | Frontier)

Sportspeople recruited from the public service have the advantage of already having an income, even though it might be low.

Sport federations often arrange government jobs for athletes who qualify for national selection but not all accept because of frugal salaries.

Zaw Zaw Aung, 37, represents Myanmar in sepak takraw. Since 2010, he’s won two gold medals at the Asian Games and three at the SEA Games. Yet he’s seen few financial rewards from his success.

“Our income is low most of the time. When we won a SEA Games gold medal we received K10 million, but we had to share it between five players. This is much lower than Thailand, for example, where the players get at least 1 million baht (K42.4 million),” he said. 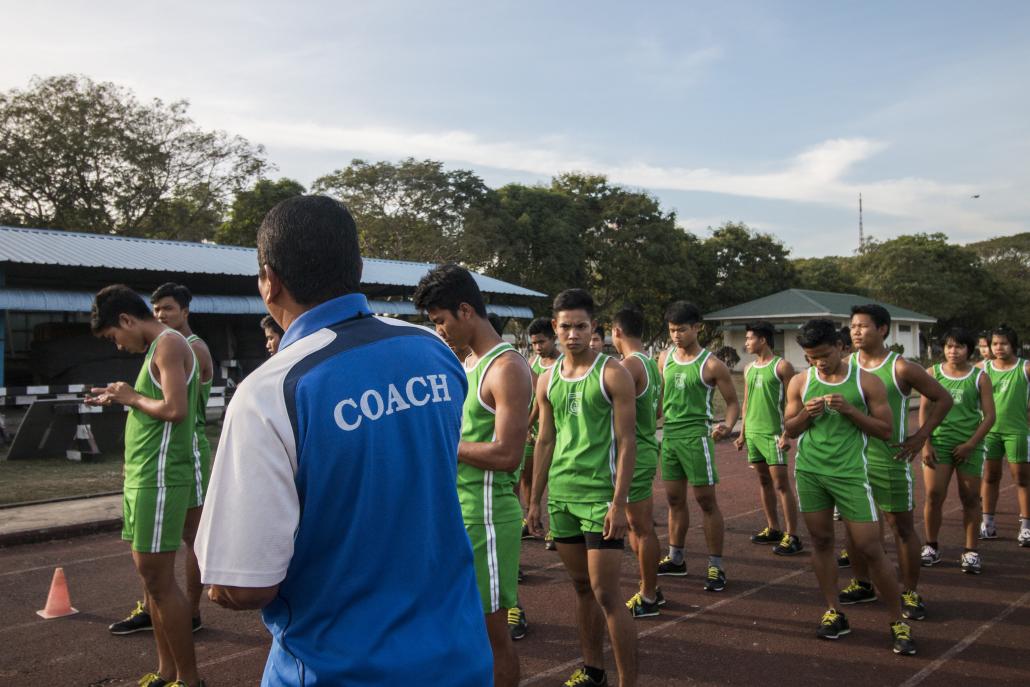 “The life of an athlete is too difficult in Myanmar. When they have a family, every player has to consider their future. Many talented, young players have left the sport because of the low income.”

Many of the players on Myanmar’s national teams come through Yangon’s Institute of Sports and Physical Education, which was set up in 1997. Its alumni have won more than 100 medals at international competitions.

Headmaster U Soe Aung said few parents are happy to see their children pursuing a career in sport.

“Many children want to play and become an athlete but their parents don’t let them. The parents want their children to be educated instead,” he said. 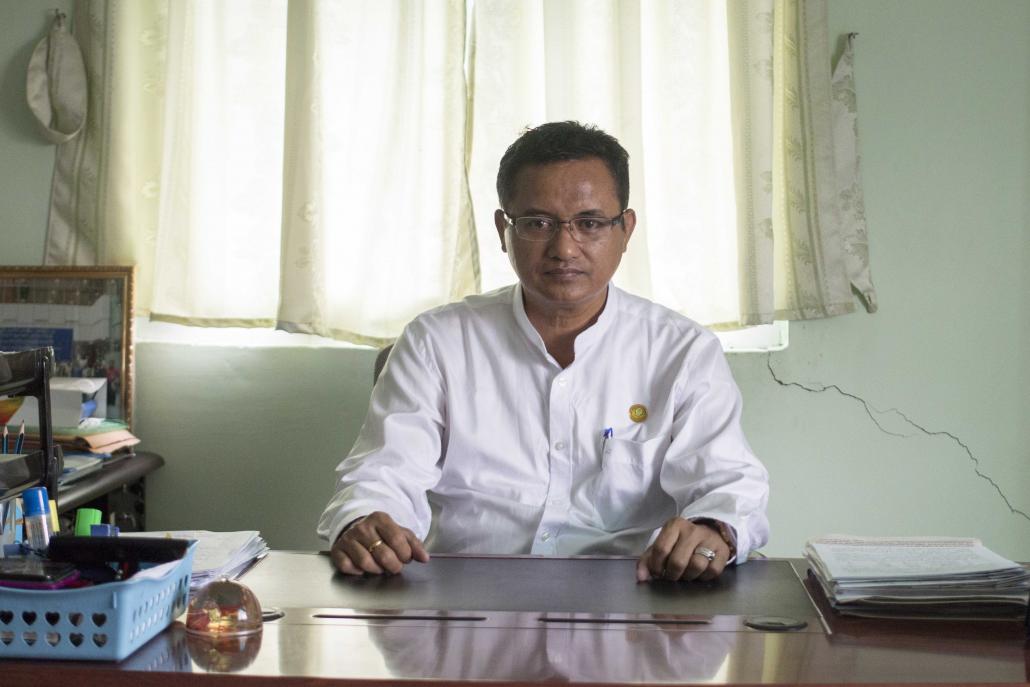 U Soe Aung, principal of Yangon’s Institute of Sports and Physical Education, which was established in 1997. (Nyein Su Wai Kyaw Soe | Frontier)

There’s been a marked improvement in the hockey team under Lu Lu Htaw and it won silver at the Southeast Asian Games in Malaysia last year (at which Myanmar also won four gold medals in sepak takraw, two in wushu and one in shooting).

It’s an impressive achievement for the hockey team, which has only one playing venue in Myanmar, at the Thein Byu Sports Ground near Kandawgyi Lake.

“It’s getting difficult to select players for the national team. Young boys want to play but their parents come to training sessions and take them back while making comments that their children could earn more working in a tea shop,” he said. 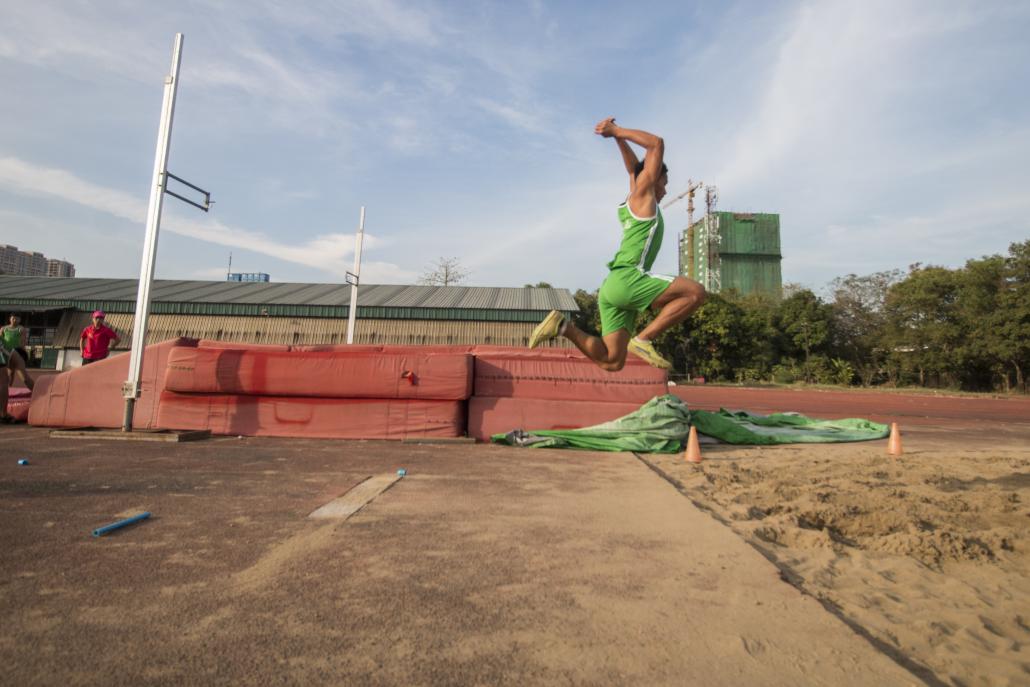 It might be understandable that recruiting players is challenging for a sport such as hockey that does not have a big following in Myanmar, but a similar situation is affecting the women’s national sepak takraw team, which has a large number of fans.

Despite winning gold at the Asian Games in 1998 and 1974 and at the Southeast Asian Games last year, the women’s team is struggling to recruit new players, said Htut Khaing Nwe.

“If the team wins a medal at the SEA or Asian games, a player will receive K2.5 million to K10 million – but winning a medal is not easy.” 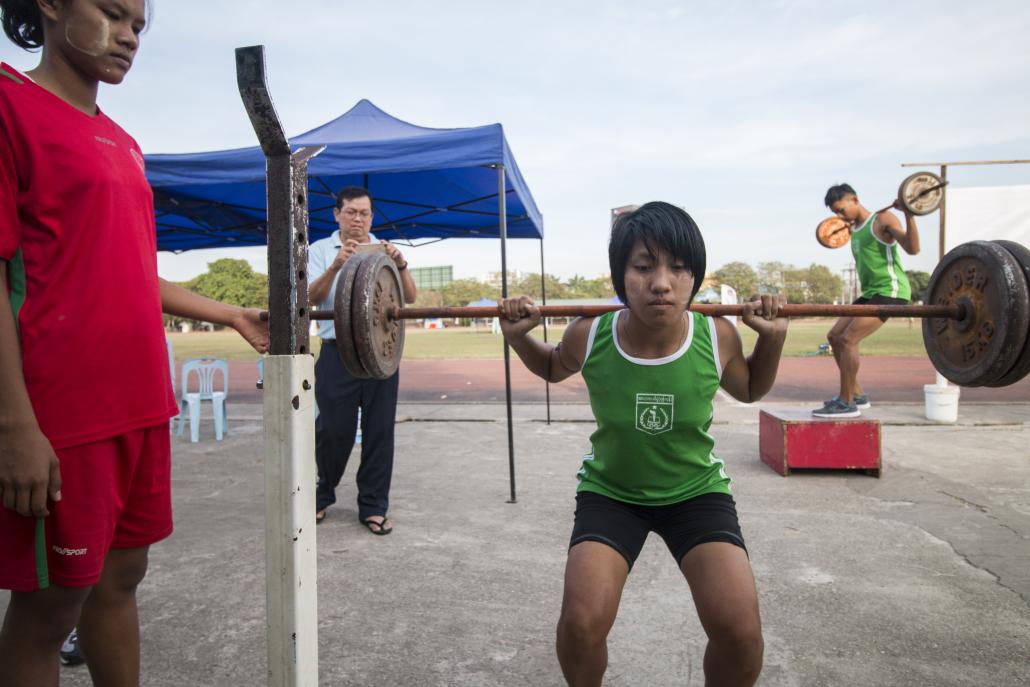 When players are at training camp, the Myanmar Sepak Takraw Federation also provides additional financial support based on their past success. Players who have won an international gold medal – at the SEA Games, for example – receive US$75 a month, while those who have received a silver or bronze get $60. Those that have competed at an international event are given $37.

Recruits receive only $22 (about K29,000) a month and it would be a struggle to live on that amount unless a job had been arranged for them at a government department, Htut Khaing Nwe said.

But even this level of financial support is a stretch for the sport federations, which receive little government support. The cost of supporting players is mainly borne by wealthy businesspeople who chair the federations.

Lu Lu Htaw hopes the situation will improve and more youngsters will have opportunities to develop their potential in team and individual sport and represent Myanmar with distinction at international events.

“I don’t want my country to lag behind in sport,” he said.