A goalkeeper boycotting Myanmar’s World Cup qualifiers has urged his teammates to “stand with the people” and raise the anti-junta three-finger salute while playing in protest at the country’s military coup.

Kyaw Zin Htet, who opted out of the games in Japan to take a stand against the coup, said his teammates should make a statement while the world is watching.

“It would be good if some of them came out and gave the three-fingered salute to an international audience,” he told AFP, referring to the Hunger Games-inspired gesture which is commonly used by Myanmar protesters.

“That’s what message they can give, and they can do it.”

Football’s world body FIFA prohibits political statements during its matches, but took no action when Germany wore T-shirts spelling out “Human Rights” – aimed at 2022 World Cup hosts Qatar – before a qualifier against Iceland in March.

Denmark, the Netherlands and Norway also made similar protests.

However, Kyaw Zin Htet said he thought it was unlikely that the Myanmar team would make a statement in Japan, “because our players aren’t united”.

“If the entire group of players had opted out, it would have had an impact,” he said.

The goalkeeper said he was boycotting the games because “I want to keep my word, for what I said and believe in”. He claimed some of the squad were being pressured into playing.

“Younger players are also being threatened on their future if they choose not to play the game, so they might be worried about it,” he said.

‘Nothing to do with us’

Coach Antoine Hey told reporters that his team would abide by FIFA rules, adding that protests had “nothing to do with us”.

“The regulations of FIFA are very clear that we are not allowed to make any sort of political statement or religious statement while playing World Cup qualifiers or football matches in general,” the German said in an online news conference.

“We will adapt to this regulation.”

He also denied any interference in his squad selection.

“Nobody will and has ever used the national team in my time for their own agenda,” he said.

“Even to think that someone can make any sort of influence into our player selection or playing style or line-up is disrespectful to me as a professional coach.”

Most of Myanmar’s 24-man squad play in the domestic league, with a large contingent from Yangon United. The group is missing several prominent players such as Aung Thu and Kyaw Ko Ko.

Hey acknowledged that several players had declined call-ups, but put that down to “many things”.

“It doesn’t mean that there are many players who are not ready to play because of political reasons or anything back home,” he said.

“This is how it is when you select the national team.”

Myanmar have not played since November 2019 because of the pandemic, and the domestic league ended in October last year.

They are virtually out of the running for the World Cup but still hope to reach the Asian Cup for the first time in 55 years. The games double as qualifiers for the 2023 Asian Cup in China.

“I’m very optimistic that we have done a good job in the last couple of weeks,” Hey said.

“The players are ready for tomorrow’s match.” 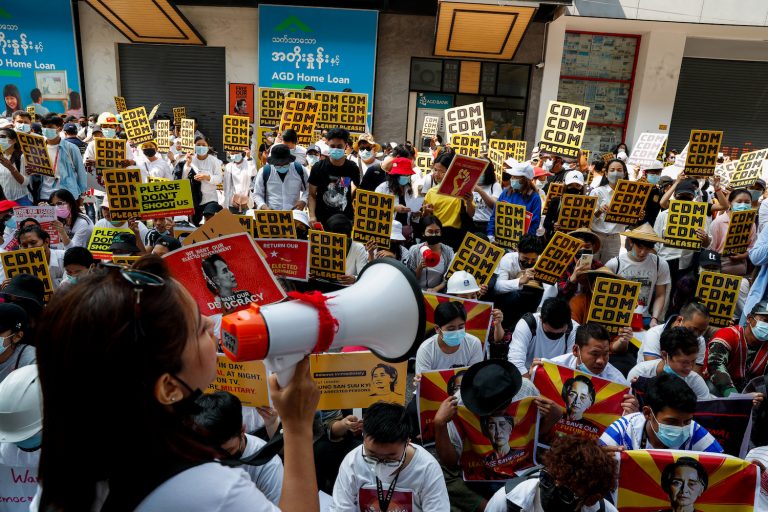 Many of the thousands of civil servants who joined the Civil Disobedience Movement have endured a year of fear and financial difficulties but they remain resolute in their refusal to work for the regime.
BY Frontier