Faces of Yangon: The men in blue

The Myanmar Police Force is under the Ministry of Home Affairs, one of three ministries controlled by the military. What are the dreams and aspirations of the men and women who help to maintain law and order?

One of the most frustrating jobs in the world must surely be directing peak hour traffic at the intersection of Dhammazedi and Link roads in Yangon. But Police Sergeant Khin Myint Maung, perhaps the best-known and most-appreciated traffic cop in the commercial capital, clearly takes pride in maintaining an orderly flow of traffic through one of the city’s most congested intersections. It shows in his smile.

The ‘happy policeman’, as he is popularly known, was born 28 years ago on a rice farm near the Rakhine State capital, Sittwe. He’s been a traffic policeman in Yangon for six years.

“I love helping people,” said Pol Sgt Khin Myint Maung, who as a boy dreamt of becoming a policeman, just like his uncle. “I treat everyone equally. I feel it’s my responsibility to guarantee a safe road. It’s my destiny to be a traffic policeman.”

Traffic police in Yangon used to have a dodgy reputation. They were paid so little that they had to earn a little extra ‘tea money’ by stopping cars and extracting hard currency from drivers. Pol Sgt Khin Myint Maung has learned that a smile, efficiency, and working long hours, can generate a financial reward, without the extortion element. It’s common for drivers to show appreciation by passing him a few kyat as they travel through the intersection. Many present him with bottles of water. At the end of the day, there’s often a small pile of them on the medium strip near where he stands, day in, day out, in all weather, directing the traffic. His service mentality is so exceptional that 7 Days News Journal bestowed on him a Real Life Hero Award.

Has the media attention changed his life?

“People takes pictures of me now, but other than that life is still the same for me,” said Pol Sgt Khin Myint Maung, who regularly works 12 hour days and earns K200,000 a month. “I love my job so much, that I hardly notice the pain in my legs from standing up for long hours,” he said. 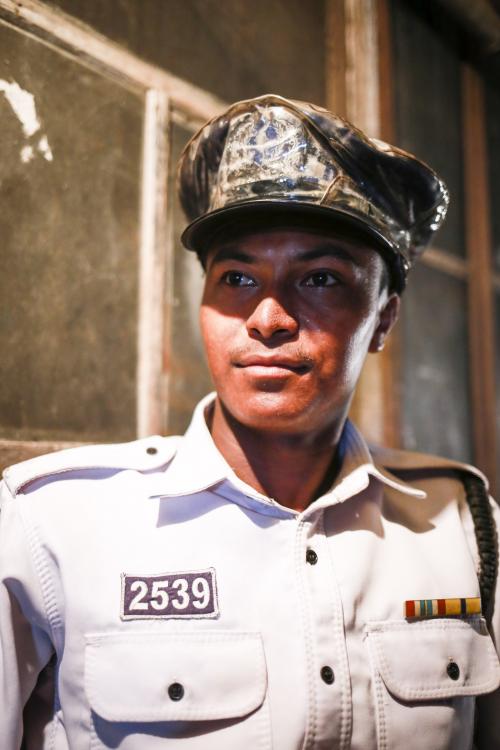 The MPF, and especially its riot police division, has a reputation that is far from favourable because of the role it has played in suppressing protests. The brutality of the riot police, known as Lone Htein, in suppressing student protests in 1988 was a catalyst in triggering the national uprising that year and the division also played a key role in crushing the monk-led Saffron Revolution in 2007.

Pakokku-born Zaw Myo Thet cited more prosaic reasons for becoming a policeman. “I needed a job,” said the policeman, now in his second year in the MPF. He guards the entrance of the Yangon Regional police station in the downtown area, and his monthly salary is K150,000.

“We are on duty 24 hours a day. We can take short breaks, but we always need to be ready.”

The regional police station, on Merchant Road, resembles a campus dormitory. Rows of longyi hang from the balconies. After dark, the policemen strum guitars and singing can be heard coming from the building.

How many people live on the premises?

He was assigned his role after undergoing six months’ training. The training has been his favourite time so far in the MPF.

“We had to wake up at 5am every day and run five miles within 45 minutes carrying our rifles. Then, at 7am we would eat breakfast and have more training sessions. We would go to sleep at 9pm after another five mile run,” Zaw Myo Thet said. “Life was simple and I felt healthy.”

His ambition? “I want to be the highest-ranked policeman one day. I only want to retire when I reach 60.”

The MPF, and especially its riot police division, has a reputation that is far from favourable because of the role it has played in suppressing protests. The brutality of the riot police, known as Lone Htein, in suppressing student protests in 1988 was a catalyst in triggering the national uprising that year and the division also played a key role in crushing the monk-led demonstrations in 2007 known as the Saffron Revolution.

“I always try to be nice to people when I give orders,” said Ko Zaw Myo Thet. “But if they don’t obey my orders, they leave me no choice but to have a tougher attitude. We policemen are under a lot of pressure. Where that pressure is coming from? From the higher ups, the officers.”

For some members of the MPF, serving the nation runs in the family. Ko Maung Maung Win, 35, who has been in the force for six years, said there was never any doubt he would become a policeman. “It is a family tradition,” he said. “There are six policemen in my family, including my father, uncles and cousins.”

Ko Maung Maung Win is one of five policemen who guard the Indian embassy, on Merchant Road. He previously served in Bago and Mandalay.

“We work almost 24 hours a day,” he said. “We take turns at napping in the security booth. Because of my work, I hardly get time to eat; that’s why I’m so skinny.”

Black-rimmed eyes were evidence of the long hours Maung Maung Win works in uncomfortable conditions. The security booth has no air conditioning, no toilet and no running water.

Asked to pose for a photo, Maung Maung Win became nervous. He did not want to get into trouble, he said. “We were told by our superiors that we are not supposed to be photographed when we are in uniform. I always try to run away when people start taking photos.”

At 2pm he changed shifts with a 18-year-old rookie colleague. “Sometimes I dare to think about not being a policeman,” Ko Maung Maung Win mumbled while he removed his uniform from his skinny body. “But that would single me out from the rest of my family.”

Asked if he was comfortable to be photographed without wearing his uniform, Maung Maung Win quickly began moving away. There was one last look over his shoulder, then he disappeared into the crowd on the footpath.