Ethnic political parties may do well in the 2020 election and even end up as kingmakers, but their dreams of federalism and greater ethnic autonomy hinge on constitutional change.

A significant decision emerged from a congress held by one of the country’s oldest and most successful political parties, the Shan Nationalities League for Democracy, in Lashio on June 6 and 7. As well as electing new central executive and central committees, the conference backed a seven-point statement that included a unanimous resolution to transform the SNLD from an ethnic-based to a “state-based” party, meaning it would seek to represent Shan State in all its ethnic diversity, rather than just the Shan.

This move is arguably significant in terms of how ethnic parties are trying to reposition and redefine themselves in advance of the 2020 general election, in order to overcome hurdles posed by the electoral system and the complex demographics of their states, which contributed to many of them performing poorly in the 2015 general election.

The SNLD is the fourth biggest party in the Pyidaungsu Hluttaw and the second biggest in the Shan State Hluttaw, after the Union Solidarity and Development Party. It holds 31 of the 103-elected seats in the 151-member chamber, which has 34 military representatives. The party was formed in October 1988 by Hkun Htun Oo, who was arrested in 2005 on charges of high treason and inciting dissatisfaction with the government and sentenced to 93 years in prison. He was released in a mass presidential pardon in January 2012.

The SNLD has worked fearlessly for democracy and federalism in Myanmar. It has been a close ally of Daw Aung San Suu Kyi’s National League for Democracy since the 1990 general election, which the junta infamously refused to recognise, and joined the NLD in boycotting the 2010 general election. Despite the NLD’s landslide win in 1990, the SNLD outperformed it in Shan State, as it would go on to do in 2015.

Yet, despite its electoral successes, the SNLD has always been challenged by the ethnic diversity of the nation’s most populous state of 5.8 million people.

Shan’s pluralism and the way it shapes political participation is highlighted by figures from the 2015 election; of 22 parties that won at least one seat, 18 represented ethnic nationalities and nine of them were based in Shan. Union Election Commission figures show that of the 96 political parties registered as of June 7, 14 of the 52 that represent ethnic nationalities are based in Shan.

If a large number of ethnic parties contest the 2020 election in Shan, the SNLD could have its ambitions to expand its seat share stymied by vote splitting. The party’s strategy to turn itself into a “state-based” party is a bid for the votes of the non-Shan ethnic groups who live in the state, such as the Danu, Intha, Lahu, Wa, Kokang, Ta’ang (Palaung) and Pa-O, and even the Kachin and Bamar, whose heartlands are elsewhere.

Ethnic parties are very likely to perform better in the 2020 election than in 2015. Apart from the SNLD’s new approach, ethnic parties in Kachin and Kayin states have merged to minimise the risk of splitting the vote in their ethnic constituencies. There is also growing speculation about ethnic parties allying with the NLD or USDP, in the event that either party needs extra votes to get its candidate elected president when the next parliament forms – a situation that would turn ethnic parties into kingmakers.

However, though the SNLD is one of Myanmar’s biggest parties, behind only the NLD, USDP and Arakan National Party in terms of seat share, it cannot expect to win enough seats in 2020 in order to pick a president.  Of the 491 Union-level seats contested in the 2015 election – 323 in the Pyithu Hluttaw and 168 in the Amyotha Hluttaw – ten ethnic parties won only 56 seats, or 11 percent of the total. The SNLD won only 15 of the contested seats – 12 in the Lower House and three in the Upper House – or 3.1 percent of the total. In seeking influence at the national level, ethnic parties must climb from a very low base.

Instead, the efforts of ethnic parties may be better focused on winning a majority of seats in their own state hluttaws and, if the constitution is amended, being able to choose the chief minister and form the state government.

Currently, ethnic parties that win a majority in their state cannot choose chief ministers until section 261 of the constitution is amended. The section gives the president the sole right to appoint chief ministers of states or regions, who then appoint the state or regional cabinet, and they do not have to be from the party with the most seats. For instance, in Rakhine State, the president appointed an NLD member as chief minister after the 2015 election over the objections of the ANP, which had won more than twice as many seats.

Constitutional change in this regard is unlikely under the current government, given that it would lessen the NLD’s control in the event that it forms the next government after 2020. Amending section 261 is currently being advocated by the USDP, with the backing of Tatmadaw members of parliament, which could tempt some ethnic parties to its side.

Another challenge for ethnic parties arises because elections for the Union and state and regional hluttaws are held simultaneously. Voters who want to see ethnic parties in power locally, but who are uneducated in the differences between the separate ballots they are given at the polling station, may unwittingly end up voting for the NLD in both the Union and state-level contests out of a desire to see the NLD triumph over the USDP nationally.

The ultimate goal of the ethnic parties is to turn Myanmar into a federal union, but this will remain a dream until the constitution is fundamentally changed. For this, the ethnic parties face a very long wait, regardless of their fortunes in the 2020 election. 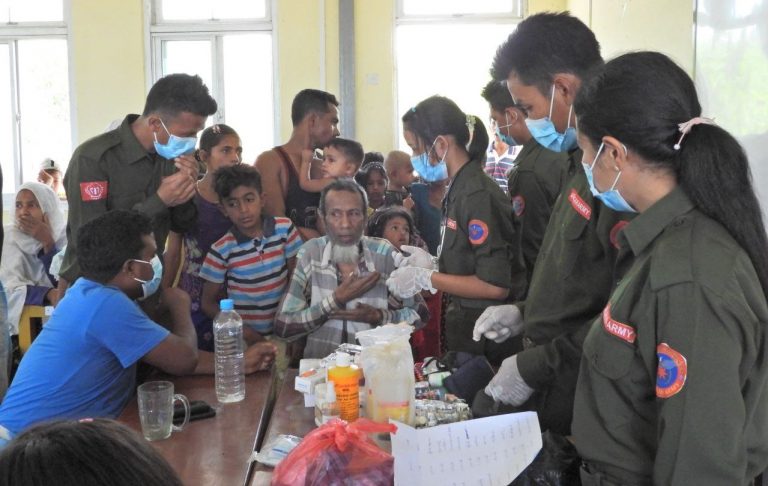 The Arakan Army and its political wing, the United League of Arakan, have unveiled a political dispute mechanism and plans for a judiciary in Rakhine State as part of their moves to “bring justice to all people living in Rakhine.”
BY Frontier