The Yangon Region government has nearly completed work on a municipal law that will enable local elections to take place in early 2018 but the details are being kept under wraps.

A LONG-DELAYED overhaul of Yangon’s municipal law could be in place by the end of this year, with elections to take place before Thingyan, a lawmaker involved in the process has told Frontier.

A new law is being drafted with input from Singaporean experts based upon the 1922 City of Rangoon Municipal Act. Although the act remains in place, it has been amended several times and supplemented with additional legislation, such as the 2013 YCDC Law.

The Singaporean involvement stems from Daw Aung San Suu Kyi’s visit to the city-state in late 2016. After the trip, the state counsellor instructed the Yangon Region government to review all existing municipal laws and by-laws to overhaul governance of the city.

Since then, little has been heard about the review process. But several months ago Yangon Chief Minister U Phyo Min Thein put the issue back on the agenda by forming a 37-member committee to review the bill.

Yangon Region Hluttaw Speaker U Tin Tun (National League for Democracy, Dagon-1) heads the reviews committee, while parliamentary bill committee chair U Thein Myint (NLD, Tarmwe-2) is the secretary. According to the undated order from the chief minister, the committee includes five additional lawmakers, Yangon Mayor U Maung Maung Soe, regional government officials and representatives of non-governement groups such as the Association of Myanmar Architects. Thein Myint told Frontier that Singaporean experts had visited Myanmar in September and met the committee, as well as officials from Yangon City Development Committee, to discuss the planned law.

The regional government submitted the draft to the review committee on October 12, Thein Myint said. He declined to discuss the contents, saying he was under orders not to reveal any details.

He said the committee would need to meet around 20 times as part of the review process, and two meetings have already been held.

The plan is to have the law enacted by the end of the year, so new municipal elections can be announced.

Thein Myint said that even if that deadline is missed the elections would definitely take place in March 2018.

Yangon Region Minister for Finance U Myint Thaung said the law would be finished “at the right time” but he wasn’t sure exactly when that would be. “The process is being led by our chief minister and our mayor, their departments and the regional attorney-general,” he said.

He suggested that Singapore’s development over the past 50 years could be at least partly attributed to the 1922 municipal act.

“Singapore copied almost all of our 1922 municipal act,” Myint Thaung said, repeating the oft-cited claim. “So we are referring [to the 1922 act] and when the [Yangon] Hluttaw approves the law we will implement it so we get development, too.”

While many Myanmar people believe Singapore “copied” the municipal act after Lee Kuan Yew paid a visit to Yangon more than five decades ago, Thein Myint said the visiting experts clarified that the law was one of many that were reviewed when Singapore was drafting its own municipal legislation. “They didn’t copy all of the 1922 municipal act but they referenced it and [the laws of] other countries,” Thein Myint said.

Yangon’s existing municipal law was enacted in 2013 by the Union Solidarity and Development Party government. By-laws concerning elections were enacted the following year.

In December 2014, the first municipal election in decades was held, with hundreds of candidates competing for four positions on the Yangon City Development Committee’s central committee, 12 positions on its district bodies, and 99 township-level posts.

The election was widely criticised because it failed to give every resident the right to vote – ostensibly in an effort to save money. Instead, each household was given one vote and strict residency requirements meant there were just 400,000 voters in a city of more than 5 million. Turnout was just 25 percent.

Despite the poll’s flaws, Yangon residents had some representation on their municipal council, and some of those who were elected made an effort to respond to public concerns.

Then, on May 16, 2016, Phyo Min Thein sacked the 115 members elected in 2014. The reason given was to bring the terms of the municipal administration into line with those of the Union and state and regional governments.

However, since then Yangon residents have had no representatives at municipal level. Instead, YCDC has been run by Yangon Mayor U Maung Maung Soe and four other executives appointed by the government.

Later in 2016, the Yangon Region Hluttaw’s Bill Committee began working on amendments to the 2013 YCDC Law and its by-laws.

Thein Myint said the review mainly focused on the electoral process and formation of YCDC. In particular, the law would have granted universal suffrage. 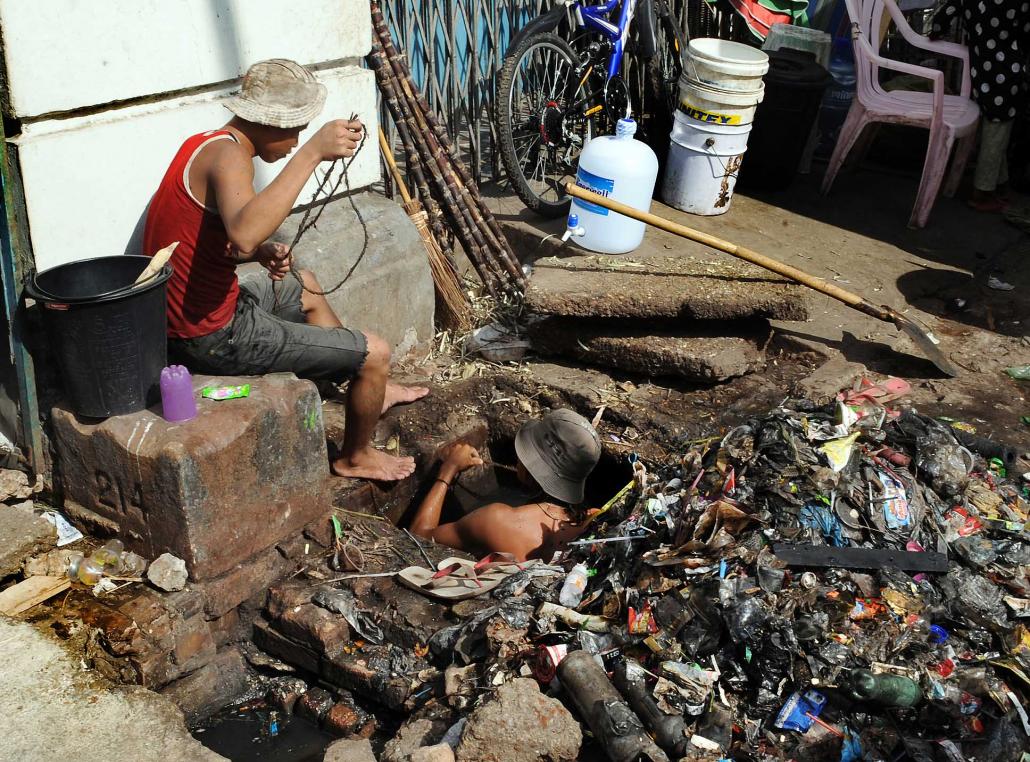 Workers clear rubbish from drains in downtown Yangon. Although the activities of Yangon City Development Committee affect the everyday lives of the city’s 5 million residents, interest in the 2014 municipal vote was low. (Steve Tickner | Frontier)

The letter referred to an announcement from the bill committee that said the draft amendments would be submitted to the Hluttaw in December 2016.

On her return, she instructed Phyo Min Thein to rewrite the municipal law entirely, according to Thein Myint.

“The state counsellor told Phyo Min Thein that Myanmar needs to overtake Singapore in 20 years so the law needs to be good,” he said.

Phyo Min Thein then instructed speaker Tin Tun to halt the planned amendments to the YCDC Law. The regional government would instead draft a new version using the 1922 law as the “backbone”, Thein Myint recalled the chief minister saying.

Lawmakers say they know little about the drafting process except that the new law will be based on the 1922 act.

U Kyaw Zeya (NLD, Dagon-2) said he had tried to raise the issue in the hluttaw and with the bill committee but been told that the speaker had ordered lawmakers to wait until the regional government had sent the new draft.

“I don’t know exactly how they are preparing this new law but we can say that the government is not following the existing 2013 YCDC Law,” he said.

Myint Thein said that once the regional government has drafted the law, it will submit it to the review committee. The committee will suggest changes and send it back to the government, after which the government will forward it to the Yangon Region Hluttaw. It will then be reviewed again, discussed and voted on – all within the next two months.

Former Yangon Region lawmaker Daw Nyo Nyo Thin said that while the YCDC Law was far from perfect, it had brought about some positive changes. YCDC had instituted a complaints mechanism whereby people could come in-person every Thursday to raise their concerns with the YCDC joint secretary.

“We heard that they took action in many cases and solved public problems. That’s because they implemented the 2013 YCDC law,” Nyo Nyo Thin said.

She said the Yangon Region government was wrong to delay the YCDC elections. “Based on the order of the chief minister, they are not following the existing 2013 law,” she said.

“They believe that the people will support anything that they do, so they just do what they want,” she added. “But I think that voters really only support Daw Aung San Suu Kyi … so [the Yangon government] should take a bit more care when dealing with voters.”

Some are skeptical that the new law will significantly accelerate development. Yangon resident U Nay Aung, who visited Singapore in the middle of the year, said Singaporeans had a very different mindset to most people in Myanmar.

“Singaporeans are afraid to break the law – that’s why their city is clean and smart,” he said. “Their rules and laws are good and they try to follow them. Myanmar people should behave like that and the government needs to do fix the law so we can reach that goal but I don’t think Myanmar will overtake Singapore.”

TOP PHOTO: A man walks in front of a campaign poster in Yangon for a municipal election in December 2014 – the city’s first in six decades. (AFP)

More than two months after they were introduced, residents and officials in Yangon are increasingly ignoring stay-at-home orders, yet the government insists infection rates need to fall before they can be rolled back.
BY Aung Phay Kyi Soe & Thomas Kean