Failure will undermine confidence in the government’s ability to deliver on major projects.

BARRING SOME unforeseen calamity that doesn’t bear thinking about, the launch last week of the Yangon Water Bus could only be a good-news story.

There was never going to be the disruption that accompanied the reform of the Yangon Bus Service in January. Modifying overnight a service that millions rely upon to get from one end of the city and back every day was always going to be fraught with risk. Get it even slightly wrong and you’ll frustrate a lot of people, as Chief Minister U Phyo Min Thein discovered with the launch of YBS.

After the dark mood over the country in recent months, the sight of hundreds of people lining up to ride the new ferry service over the weekend of October 7 and 8 was something to lift the heart (even if many missed out because of a lack of seats). Finally, a new initiative from the government had come to fruition, something that could be seen and touched.

Frontier sometimes gets accused of being negative, even of running personal vendettas. Trust us: We want the government to succeed as much as anyone. If we criticise, it’s not to score cheap points: it’s to point out things in the hope that they will improve. We are not partisan: we just want a better future for the country.

We’ve sat through enough Yangon traffic jams to want initiatives like the YWB to be a success. But here’s the problem. The YWB novelty will wear off quickly. In the meantime, it needs to prove to potential commuters that it is competitive with existing bus and train services, in terms of time, money, comfort, reliability and convenience.

YWB will not be able to solve Yangon’s transport problems on its own. At best it will still only capture a small share of the transport market. But it’s a high-profile project, a lot of money has and will be spent, and the government has also invested quite a lot of political capital. There’s a lot riding on the outcome.

Early evidence suggests that it will struggle to win passengers. At present, services are too infrequent to be a viable alternative for most commuters. The company behind YWB, Tint Tint Myanmar, says more boats are on the way, something that will hopefully result in a more reliable service. But YWB is at a disadvantage to the bus and train because many people will have to take one or two buses to get to and from ferry terminals, which will add significantly to the cost of their journey. To compete, YWB will have to be significantly faster.

The real risk is that YWB becomes a slightly upmarket Yangon Circle Line ferrying a handful of foreign tourists on sightseeing voyages up and down the Yangon River. It might inadvertently boost tourism in Insein Township – it could well become the new Dala – but in reality it will have a limited impact on Yangon’s well-documented traffic problems.

Even worse, it could be like the Strand Road tram. Remember that? A public transport service that there was absolutely no demand for. Luckily it was just a pilot project.

All this is to say that new initiatives are great ­– the more creative, the better. But they should be subject to stringent analysis before launch to ensure they stack up.

Because even when the funding has come entirely from the private sector – it’s not entirely clear who has invested what in YWB – there is still a price for failure. It’s called opportunity cost. The time and energy spent on YWB could have been devoted to a differently configured ferry service, or an alternative transport mode. Failure will also undermine confidence in the government’s ability to deliver on major projects.

In the coming months, Frontier will be watching – and maybe sometimes riding – the YWB with interest. Time will tell whether the Yangon Region government, Yangon Region Transport Authority and Tint Tint Myanmar have got the formula right.

This editorial first appeared in the October 12 edition of Frontier. 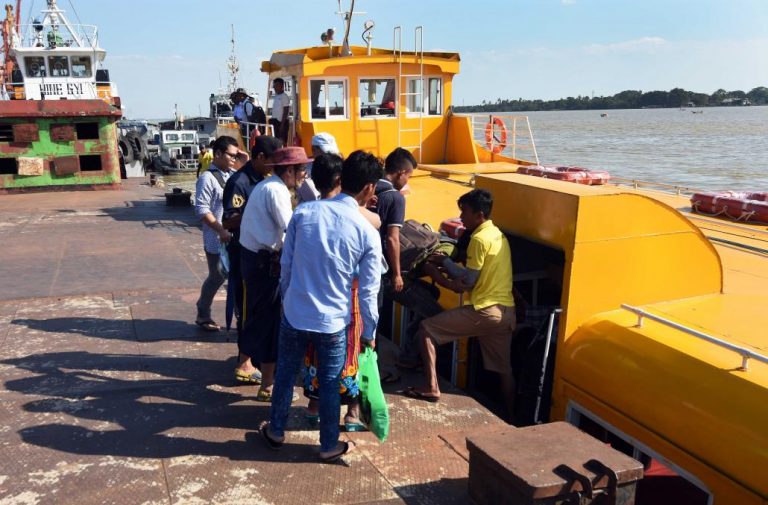 A day on the Yangon River

Yangon’s water bus may not yet be a viable alternative to commuting on the bus or train, but it does make for a pleasant day out.
BY Oliver Slow