As former president U Thein Sein tightens his grip on the Union Solidarity and Development Party amid reported plans to build a presence in civil society, some are wondering if he’s planning a comeback in 2020.

Former President U Thein Sein had quietly disappeared from public view after the change of government before news emerged ahead of Thingyan that he had become a monk for five days at a monastery at Pyin Oo Lwin.

Many had wondered, after his decision not to stand in the November 2015 election, whether he might have been planning a quieter life after five years in the nation’s top job. But that seems unlikely.

Thein Sein, 71, remains deeply involved in politics through his position as chairman of the Union Solidarity and Development Party. His control over the USDP was consolidated on April 22 when it expelled Thura U Shwe Mann and 16 of his factional allies in the last act of the purge that began in August when the former Speaker was removed as the party’s chairman. The expulsions were decided at a meeting of the party’s central executive committee attended by Thein Sein.

The documents show that the centre – which will include a library, a research and development arm and other departments – was registered in March, will work with domestic and foreign counterparts and have a 15-member board that includes people close to Thein Sein.

Before the election last year, Nay Zin Latt founded the National Development Party, which was widely seen as a proxy for Thein Sein if he wanted to stand for parliament.

On April 25, Shwe Mann posted a statement on his Facebook page criticizing the move, saying it did not reflect public opinion.

“If I am or am not a party member is not important, I would like to work for the public interest and that is my first priority … I would like to cooperate with the parliament, government and the public for the interests of the country,” he said in the statement. 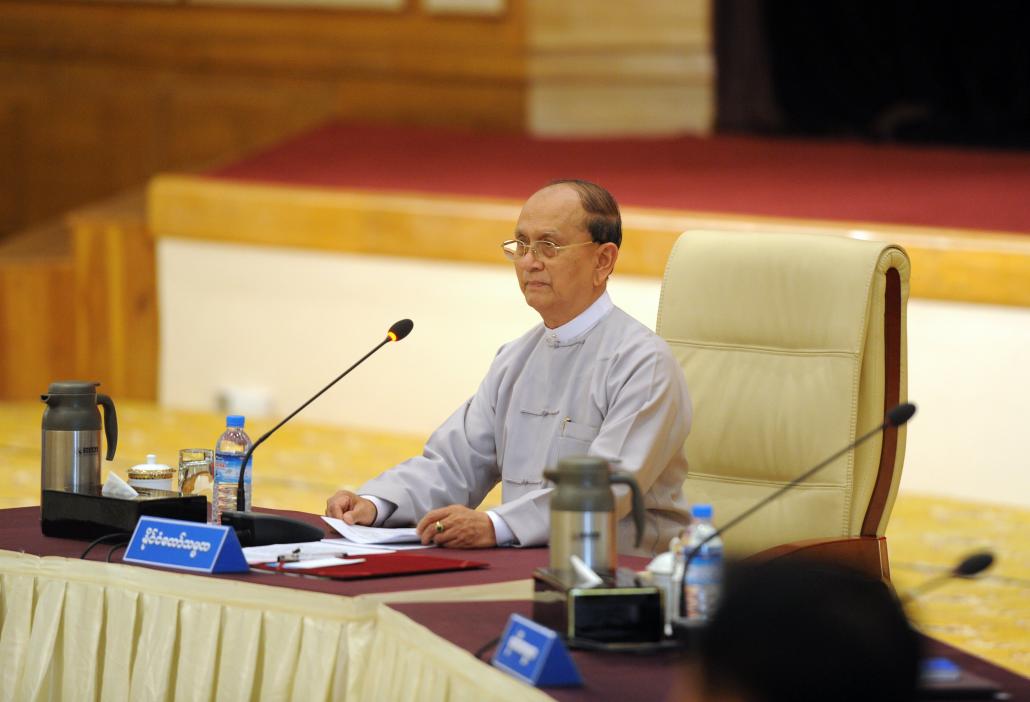 Political analyst Dr Yan Myo Thein said the establishment of the centre suggested that Thein Sein’s powerbase in the USDP was already looking to the next election in the hope of recovering from the party’s humiliating defeat last November.

“It means they’ve been planning for the 2020 election,” he said. “It is a plan to penetrate the country’s civil society organisations.”

The dramatic ouster of Shwe Mann as the USDP’s chairman last August followed months of simmering rivalry between the Speaker and President Thein Sein, including over the leadership of the party.

Thein Sein was forced to relinquish the chairmanship of the party to Shwe Mann in May 2013 because of a provision in the constitution that prohibits the head of state from being involved in a political party.

The move against Shwe Mann last year came after he antagonised USDP hardliners in June by allowing a debate in parliament on amendments to the constitution. There was also disquiet in the USDP over his relationship with National League for Democracy leader, Daw Aung San Suu Kyi.

After Shwe Mann and 12 factional allies were purged from the party in August, Thein Sein oversaw a big reshuffle of its central executive committee that involved replacing more than 50 people.

Chairing the USDP is a significant role because of its importance and its status as the country’s richest political party. A news conference after the party’s central executive committee meeting in Nay Pyi Taw on May 31 last year was told that it cost US$1.17 million a month to run the USDP before 2015.

The USDP registered as a party in June 2010 and is the successor of the Union Solidarity and Development Association, a mass organisation created by the junta in 1993.

The privatisation of state-owned businesses ahead of the 2010 election enabled the USDP to acquire businesses to generate revenue. The privatised businesses included 273 petrol stations sold for surprisingly cheap prices. Many were bought by cronies, but the USDP acquired 19 that sold fuel as New Day Energy.

However, USDP central executive committee member U Soe Naing told the news conference in May last year that the party was no longer involved in running any businesses. The statement raises questions about USDP funding, though the sale of any businesses such as the New Day Energy filling stations would likely have realised a substantial profit.

Although there might be a cloud over the USDP’s business activities, it is dwarfed by the shock of the size of the party’s defeat last November.

After months of internal crisis and a crushing election defeat, the USDP is planning a party conference in the next two months at which a re-organisation of the party is likely to be high on the agenda.

Political analyst U Ye Myo Hein told Frontier he expects there will be close cooperation in the future between the USDP and the Tatmadaw as part of a strategy for countering the NLD.

Nay Zin Latt said research by his National Development Party had shown that Thein Sein continued to enjoy a high level of support within the USDP, despite its election defeat.

Speaking ahead of the April 22 meeting at which Thein Sein consolidated his hold on the party, Open Myanmar Initiative research director U Htin Kyaw Aye said the USDP’s next month was difficult to predict.

“Maybe they are not decided and are still unclear how they will play this game, whether he will lead the party or stand as the former president doing NGO work,” he said.