The Strand, revived and looking ahead

The Strand Hotel has known good times and bad, and in a fiercely competitive hospitality industry is selling itself by highlighting its rich history and image of genteel luxury.

THERE WAS a time when the Strand Hotel, one of Yangon’s most distinctive historical jewels, was rather shabby.

By the 1980s, General Ne Win’s socialist dictatorship had steadily driven the national economy into ruin, and with it, British Burma’s first world-class hotel.

Patronised by diplomats, tycoons and visiting dignitaries, the Strand had retained its lavish white columns and air of colonial pomp, but the food was drab, the wallpaper was peeling and a room could be booked for about US$20.

“You had waiters wearing white gloves, but it was still run down,” said Mr Sukhdeep Singh, managing director of the Strand’s parent company, Myanmar Hotels International. 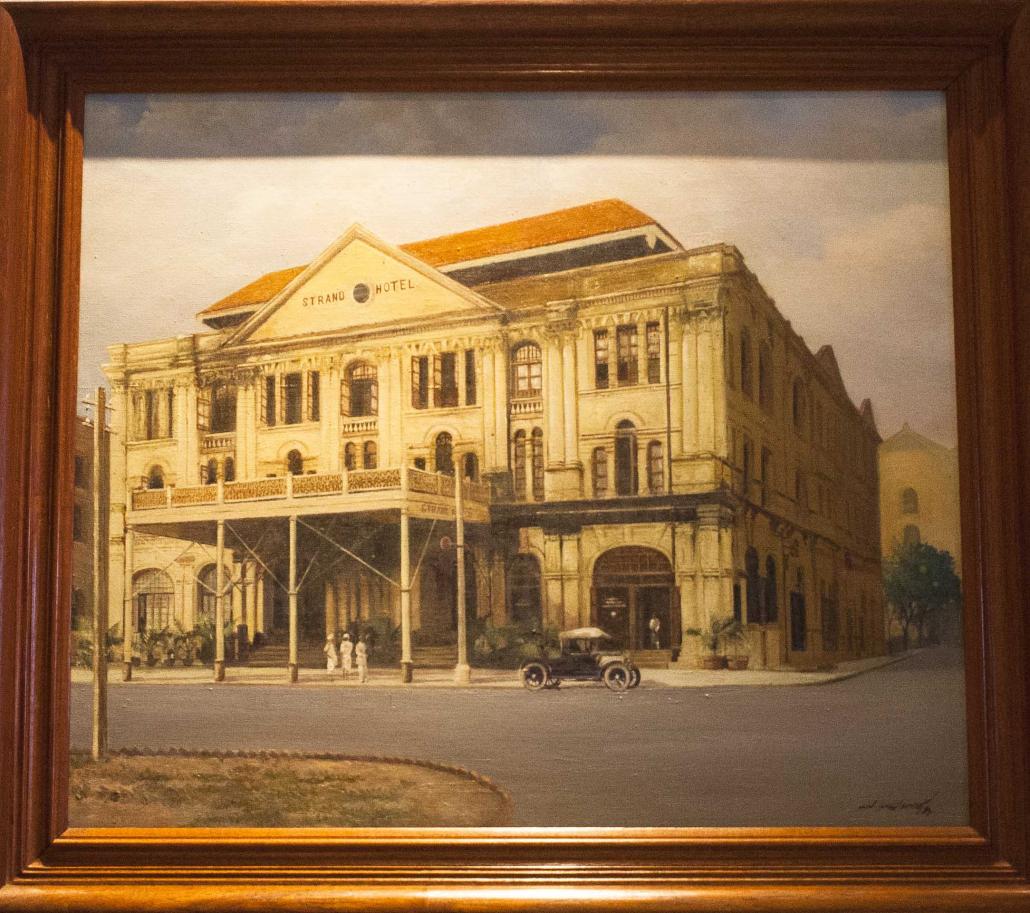 The Strand remains closely associated with the colonial period, but maintaining a balance between history and luxury is not always simple. (Theint Mon Soe aka J | Frontier)

Singh, originally from India, became the Strand’s general manager in 1991, when Indonesian journalist-turned-hotelier Mr Adrian Zecha put together a group of investors to restore the hotel to its former glory. Zecha had stayed at the Strand when he was a reporter and saw it had huge potential.

“We really had to gut it,” Singh said, describing the painstaking three-year renovation. “We needed to train everyone, bring in the guest amenities, the linens, everything. There was none of that in the market because there was no need for it,” he said, recalling a time when Burma was attracting only 40,000 travellers a year.

It was not the Strand’s first revival (the hotel fell into disrepair under the Japanese occupation, when it was briefly renamed the Yamato), nor would it be the last. 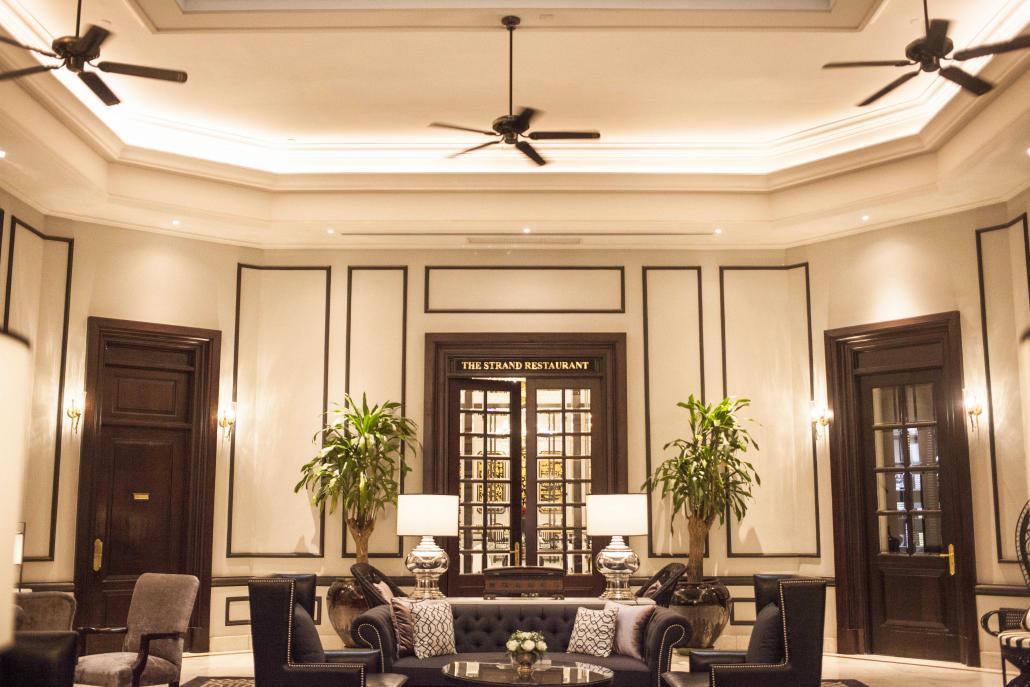 Last year, the Strand closed briefly to rejuvenate its suites with new linens and furniture, repaint its walls and colonial-era wicker chairs, install new computer systems, and make other improvements designed to bring the establishment closer to again being regarded as “the finest hostelry east of the Suez”.

The phrase was used to describe the Strand in The Handbook for Travellers in India, Burma and Ceylon, a 1911 guide by the London publisher, John Murray. The hotel, which opened in 1901, was built by a British entrepreneur, Mr John Darwood. It was later acquired by the Sarkies brothers, the famous Armenian hoteliers who also owned the Raffles Hotel in Singapore and the Eastern & Oriental Hotel in Penang, Malaysia.

A century later, the quote has become something of an unofficial mission statement for the Strand. It is not that the hotel has not received any good reviews since 1911, but rather, the quote evokes an image from an era when Eric Arthur Blair – better known as the writer George Orwell – sipped tea in its café and gazed out at the Yangon River. 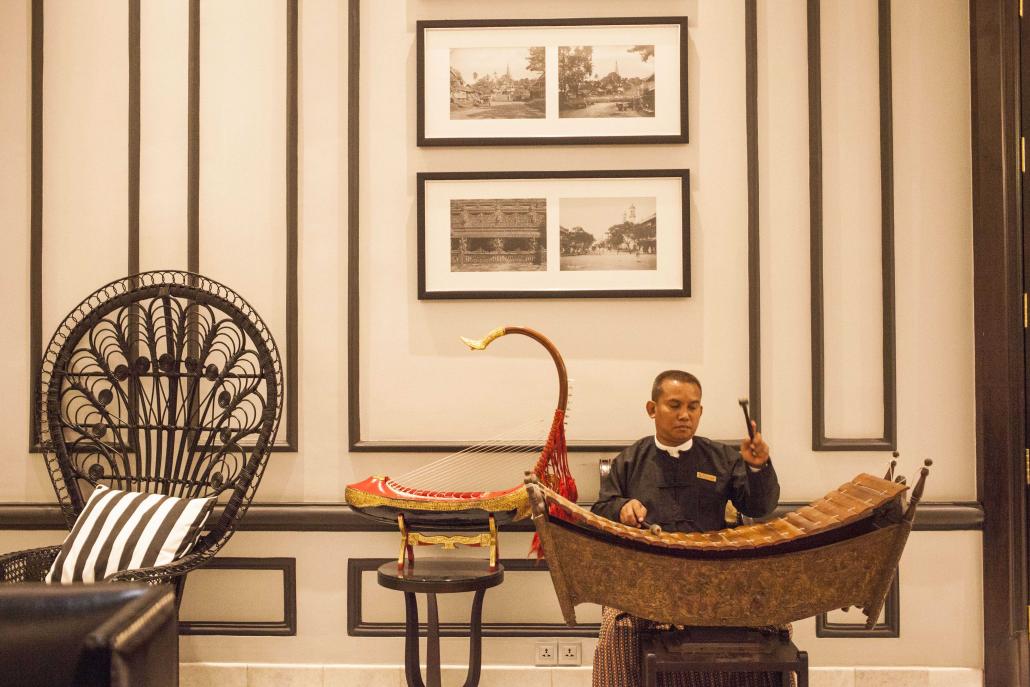 That history is the Strand’s best asset in an increasingly crowded industry. The dozens of hotels built in Myanmar in recent years have seen the number of rooms rise to about 60,000, in Singh’s estimate, an increase in supply that has outpaced the influx of arrivals since reforms began in 2011.

“Before, we were selling history, and the hotel has not changed on that part,” Trinquand said.  “It’s still history, but with a slice of luxury. We are selling luxury history.”

As a boutique hotel with only 31 suites, the Strand cannot compete on pricing with big hotels such as the Shangri-La or the Sedona.

Instead, it has doubled down on luxury: In addition to the 2016 refurbishment, it launched an Ayeyarwady River cruise between Bagan and Mandalay and invested heavily in its café and restaurant. The hotel’s Italian executive chef, Mr Christian Martena, has run Michelin-starred restaurants in Europe and a high-end eatery in Bangkok. 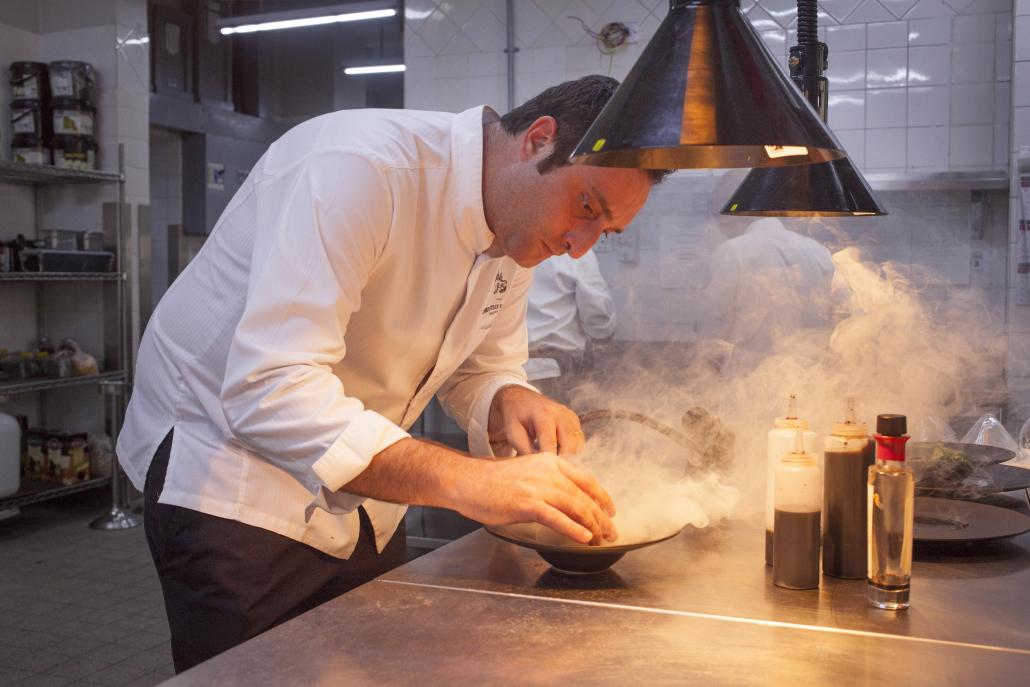 These moves are unlikely to spare the Strand from a downturn in the hospitality sector. Singh described them as “a long-term investment.” But in a way, the Strand is adopting the same business model it had in 1901: to become truly world-renowned in its own right, not merely as a success story for a fledgling democracy or as a historical artifact.

From a marketing perspective, curating the Strand’s international reputation is something of a Catch 22. For example, the Strand does no traditional advertising, which would undermine its own mystique.

Rather, the strategy is to subtly foster the image of a hotel that doesn’t need to put its name on billboards and magazine ads, said Trinquand.

“We have employed marketing companies around the world, not in advertising media, but press releases,” Trinquand said. “In every country the Strand has been referenced and talked about.”

Maintaining the balance between history and luxury also has costs in the Strand’s day-to-day operations. The iconic downtown building is no longer suited for the security needs of heads of state and other high-profile dignitaries. The hotel avoids DJ parties and other crowd-gathering events that would mar its image of refinement. It is also one of the few hotels in the region that has a butler service. 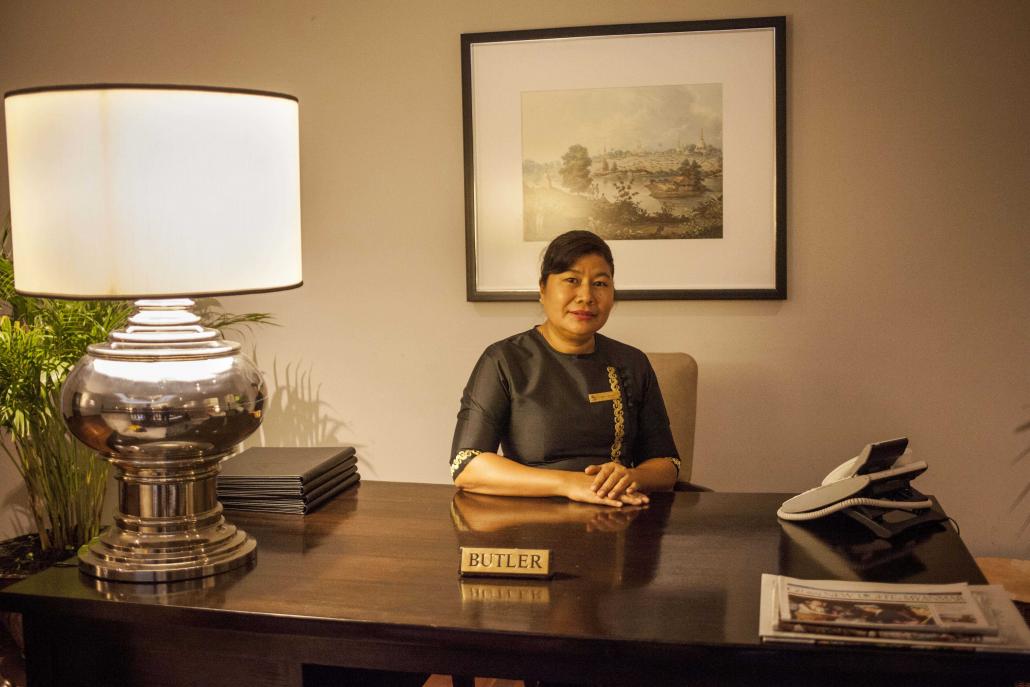 Daw Mya Mya Cho joined the Strand Hotel as a maid in 1993. She is now in charge of its butler service – something that few hotels in the region still offer. (Theint Mon Soe aka J | Frontier)

Butlers, in the traditional sense, are staff members relegated not to specific duties, but specific rooms; they might mix cocktails, run a bath or retrieve a tuxedo from the cleaners. It is an expensive, somewhat obsolete feature that has been discarded by most modern hotels, but these sorts of practices are as essential to the Strand’s identity as its colonial columns and wicker furniture.

“It is about the history, the luxury and also the people,” Trinquand explained.

The woman who oversees the Strand’s butlers has been with the hotel since it re-opened in 1993. Daw Mya Mya Cho, 47, started out as a maid. Her experiences have included waiting on Sir Mick Jagger, spending a night at a hospital while a guest was treated for alcohol poisoning, and former American president Mr Jimmy Carter insisting on pitch darkness in his room.

“He didn’t like the light coming from under his bathroom door, so we had to have special sandbags made to block it out,” Mya Mya Cho said.

When Mya Mya Cho was a little girl in Ne Win’s Rangoon, the Strand was famous for baked bread and pastries. The hotel has always found a way to maintain its reputation, she said, adding that despite a series of owners and refurbishments over the decades, “My feeling is the same.”