The healing of Meiktila

Three years after it was torn apart by communal violence, Meiktila continues a slow recovery that is being aided by efforts to promote interfaith understanding. 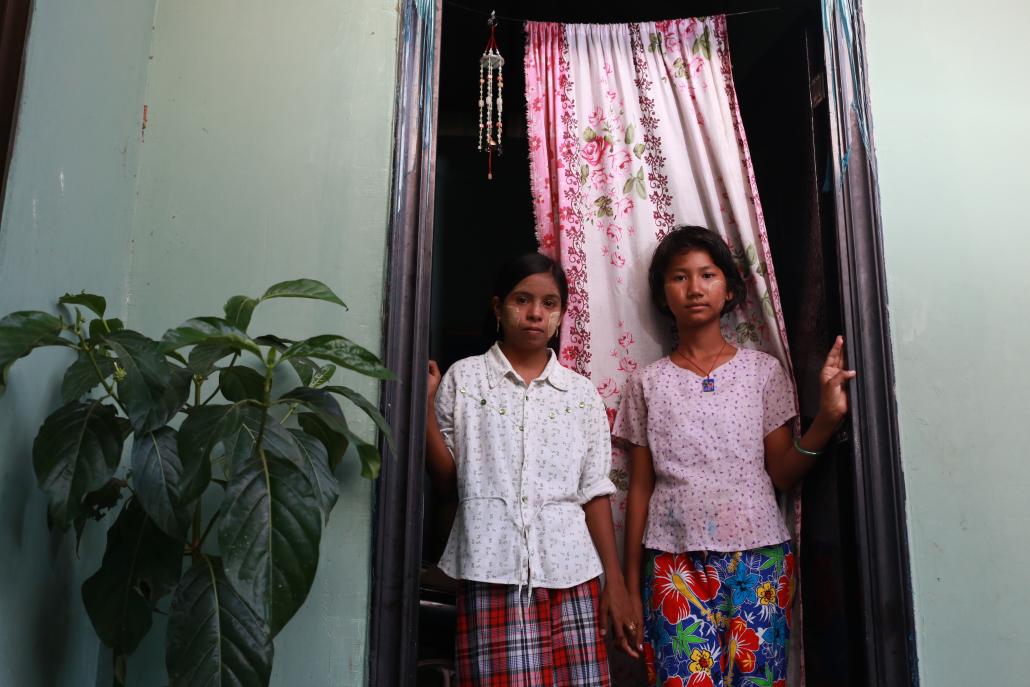 Muslim Muyar, left, and Buddhist Aye Kyiphyu live next to each other in Meiktila’s Chan Aye Quarter, which was burnt down during the 2013 religious riots. “We are good friends, whatever happened,” Muyar said. “Both of our families tried together to escape from the fire. Kyiphyu carried my little sister when we ran. I will never forget her help.” (Yu Yu Myint Than)

In a Muslim-owned teashop near Meiktila’s central market three Buddhist men sat recently, enjoying a quiet chat. It is a scene that would have been unimaginable three years ago after the dusty trading city was convulsed by sectarian violence.

The scene in the teashop was also an indication that the emotional scars inflicted on the community by the bloodshed are slowly being healed.

The violence that erupted in Meiktila on March 20, 2013, began with an argument at a Muslim-owned gold shop that turned into a riot and escalated out of control after a monk was murdered. Three days of bloodshed, arson and looting left 43 people dead, most of them Muslims, and houses reduced to ashes, leaving about 12,000 homeless. 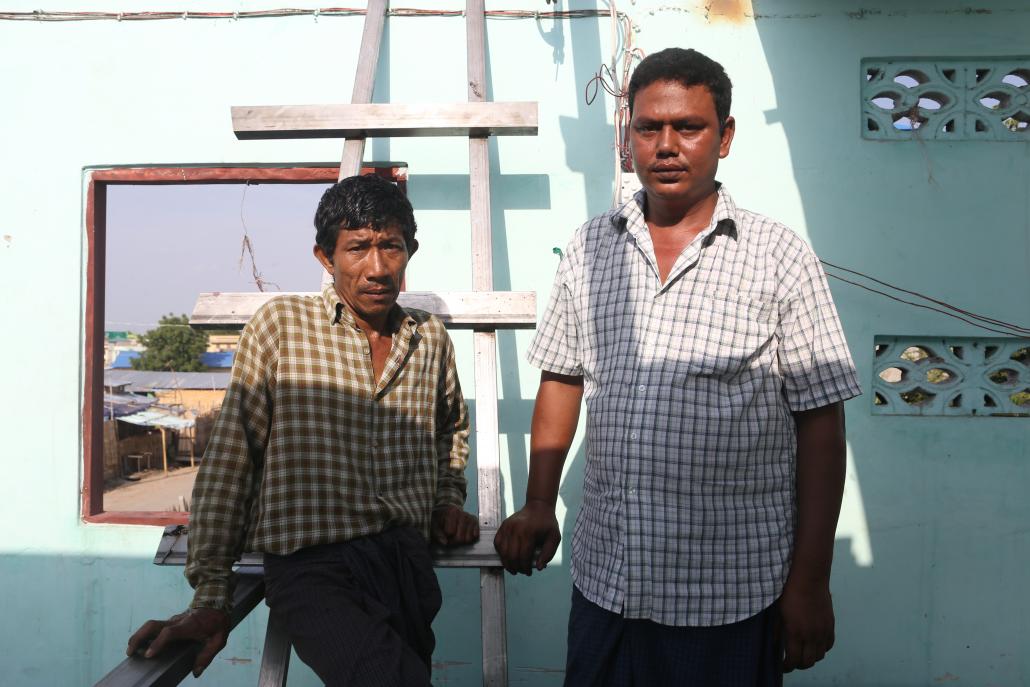 U Than Myint Swe, left, and Ko Boak Kyi. The house of Boak Kyi, a Muslim, was built by Than Myint Swe’s construction team, all of whom are Buddhist. They repaired Boak Kyi’s house after it was damaged during the 2013 riots. “I have worked with his team for many times and I trust them … I can hire another Muslim team but I decided to hire them as he is a good friend and good worker.” Boak Kyi said. (Yu Yu Myint Than)

Meiktila, a city of about 100,000 people in Mandalay Region, has a large Muslim minority. It is an important central Myanmar trading hub at the intersection of roads from Yangon, Mandalay, Myingyan, Kyaukpadaung and Taunggyi.

“Only a month after the conflict, we began interfaith activities,” a Muslim community leader, U San Win Shein, told Frontier in an interview at the teashop.

He said a group of Buddhist monks and Muslim men had visited camps sheltering members of both communities whose homes had been torched.

“We spoke to the homeless people and donated necessities; people were amazed by the sight of us [together],” he said.

“We got back to normal after about six months, except for a few people,” he said.

“From my perspective, I think the two communities have realised what was the source of the conflict and are getting back to peace.” 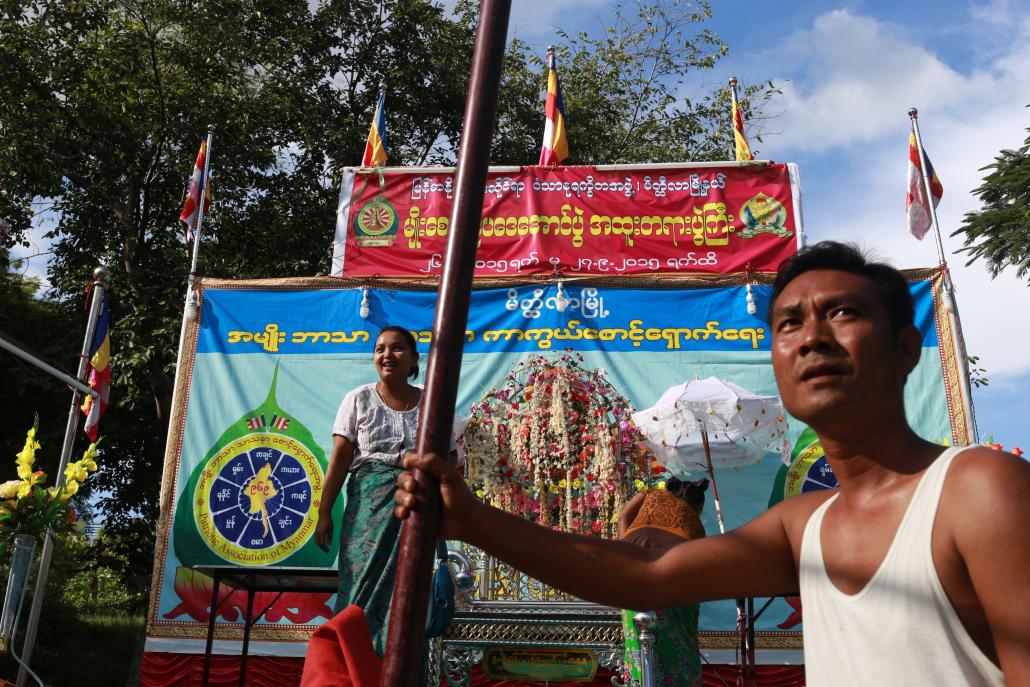 Ma Ba Tha followers in Meiktila prepare for a celebration ceremony as a token of the group’s successful campaign to enact the so-called ‘Race and Religion Protection’ bills, in September 2015. The four laws are widely considered to be targeted at Myanmar’s Muslim community. (Yu Yu Myint Than)

San Win Shein is vice-chairman of a Meiktila-based group that promotes interfaith activities and is also an assistant secretary at a government-formed district-level multi-faith association.

“Fear and insecurity lingers in the two communities,” he said. “My 80-year-old mother is also a Meiktila native and she never had such an experience in her life,” said San Win Shein, who still mourns the death in the violence of his close friend’s son, a high school student.

The violence disrupted the Meiktila economy and business at the central market fell by about two-thirds, said city resident Ko Aung Myo Htut, who has received training in trauma counselling.

Many people remain traumatised by the violence even though they seem to be unaffected, he said.

“One man I know who was severely injured always says in public he is okay, but when I counsel him in private he talks in a forceful, emotional way about what he experienced,” Aung Myo Htut said. 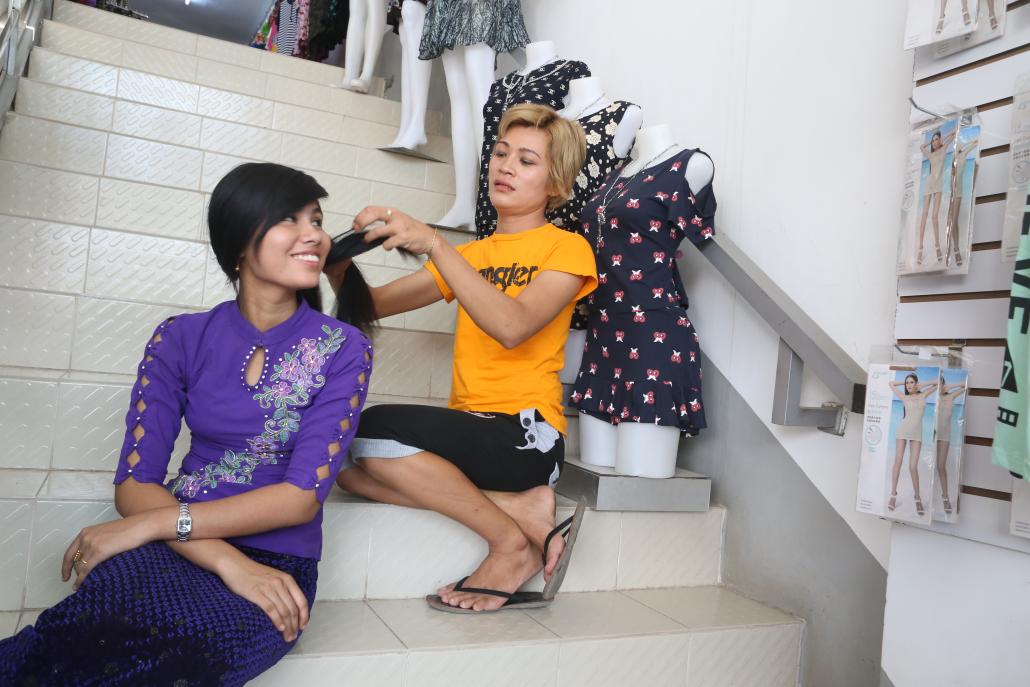 Ma May Oo Khin, 31, left, and Ko Naing Naing, 23. Naing Naing was reluctant to return to the fashion store he worked at with May Oo Khin after the 2013 riots. “The conflict damaged the trust between two communities and I just wanted to work where Buddhists were,” he said. He returned to the shop last year; partly, he says, because May Oo Khin and other Muslims were more accepting of his sexuality than Meiktila’s Buddhist community. (Yu Yu Myint Than)

Ko Htein Lin Khaing, an 88 Generation activist who has been involved in the efforts to defuse tensions in the city, said relations between the Buddhist and Muslim communities were improving.

As evidence, he said one of those jailed in connection with the fatal attack on the monk had been released under amnesty and had not been assaulted or abused since returning to Meiktila.

“From my perspective, I think the two communities have realised what was the source of the conflict and are getting back to [living in] peace,” said Htein Lin Khaing, a Buddhist whose family runs a beauty parlour in a property rented from a Muslim.

However, a recent development may have negative implications for maintaining community harmony.

Ko Kyaw Soe Moe, a Meiktila-based reporter for popular daily The Voice, said a group calling itself the National Security and Protection Committee, widely believed to be a branch of Ma Ba Tha, had been formed in the city a month ago.

Ma Ba Tha is the Myanmar acronym of the Buddhist ultranationalist Association for the Protection of Race and Religion.

Meiktila residents said events propagating hate speech were being held at public places in the city once or twice a month.

San Win Shein said the events were fuelling inter-communal hatred but Htein Lin Khaing said the audience they attracted was in decline.

Meiktila was one of the few electorates in which the NLD lost to the Union Solidarity and Development Party in last November’s election and the legacy of March 2013 is a factor.

Prominent NLD member U Win Htein, who won the seat in the 2012 by-elections and said after the bloodshed the following year that he was “ashamed to be from Meiktila”, did not re-contest last November. 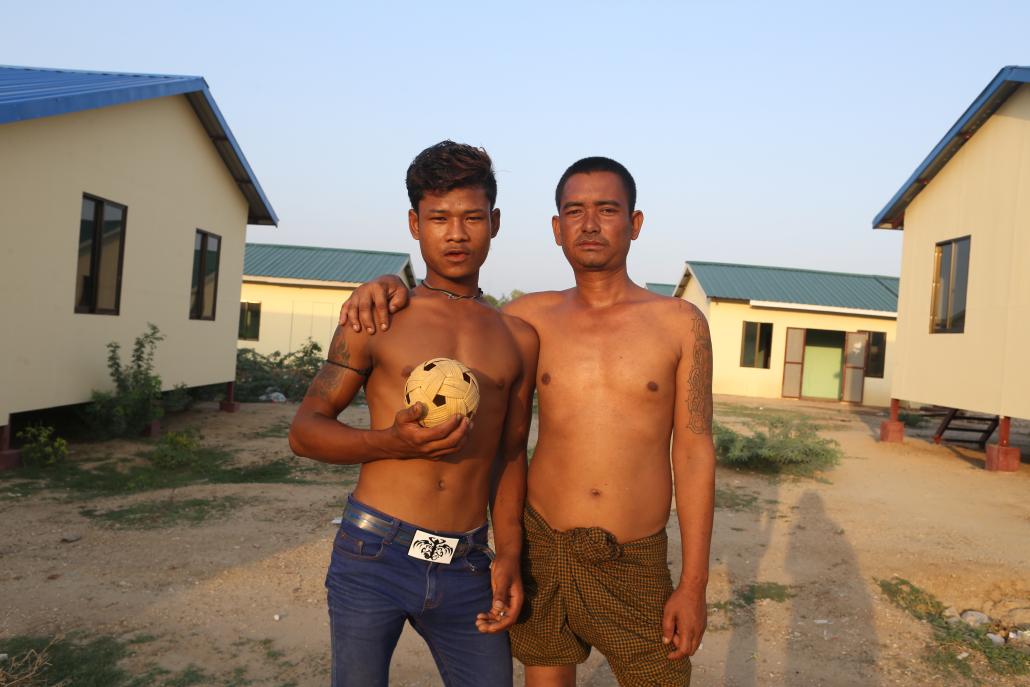 Ko Zaw Min, 34, right, and Ko Zaw Min Oo, 23, in Meiktila’s Chan Aye Quarter. The neighbourhood was burned down during the 2013 riots. Now new houses are being built with the help of religious groups, along with some government support. “Since we were young, both Buddhists and Muslims lived together in Chan Aye Quarter happily,” Zaw Min said. Says Zaw Min Oo, “At first, I was hesitant to play chinlone with Muslim friends like before, [but] Ko Zaw Min is crazy for chinlone like me and we are close. We both love tattoos.” (Yu Yu Myint Than)

Also defeated in Meiktila was Daw Khin Wine Kyi, a member of the National Democratic Force who had previously represented Yangon Region-1 in the Amyotha Hluttaw, where she seconded the law on religious conversion.

Various reasons have been proposed for the NLD’s big defeat in Meiktila.

Kyaw Soe Moe said the NLD won at polling stations in Meiktila but lost by a large margin in village areas.

He believes voters in rural areas were influenced by an anti-NLD scare campaign that Muslims would take over the country if the party won.

Htein Lin Khaing said the NLD lost because its campaign was not effective.

All those interviewed in Meiktila about the violence of March 2013 believe it was planned deliberately.

“There was an invisible hand behind the conflict,” said the Venerable Sayadaw U Vithuddha, who was widely praised for sheltering more than 1,000 people, including about 800 Muslims, in his monastery compound during the violence.

The Sayadaw said that before the violence, relations between the Buddhist and Muslim communities in Meiktila were unusual because they had lived together like members of a family.

“They [Muslims] have been living here for centuries,” he said.

“In a normal situation, there was no way conflict could break out; what happened was intentional.”

The Sayadaw said that only a few hours after providing refuge at his monastery for members of the two communities, they were talking together and sharing food.

Education is the best way of building understanding and avoiding conflict, said the Sayadaw, who with other religious leaders runs a group that brings together 15 children each from the city’s Buddhist, Muslim, Christian and Hindu communities.

Despite the easing of tension, the trauma experienced by many during the violence means they may never return to their normal lives.

“Some rancour still remains between the two communities,” said Min Aung, a Muslim who suffered head injuries when he was attacked during the unrest and was taken to hospital. He said he was asked to leave the hospital after being treated because staff were fearful about the possible consequences of his presence.

Min Aung said the city’s residents fear the possibility of another incident that could spark unrest.

“I am worried that if there is no rule of law and justice, conflict might occur again and spread throughout the country.”