Critics of Myanmar’s antiquated prostitution laws hope the next parliament will emphasise protection rather than punishment for sex workers.

What was described as an attempt to “reform” the prostitution industry has died a quiet death in the Union parliament and will now be left to the next government to tackle.

The proposed amendments to the 50-year-old Suppression of Prostitution Act would have further criminalised the trade, had they been approved. Sex workers would still be liable to prison sentences of a year or more. They could still be forced to undergo health checks without their consent and be forcibly confined to a medical institution if found to be carrying a sexually-transmitted disease.

Among the few notable changes in the amendment bill originally tabled by the Ministry of Home Affairs were the removal of seldom-used provisions that permitted the flogging of male brothel owners and pimps, and greatly increased fines for sex workers who refuse to submit to a doctor’s examination or medical confinement.

In a dubious move toward equality, instead of heeding the calls of civil society groups and some lawmakers to consider decriminalising the sex trade, the law would have also subjected clients of sex workers to criminal punishment for the first time.

Those pushing for a harm reduction approach believe they have a greater chance of introducing meaningful reform to the sex industry under the incoming National League for Democracy government.

The debate over amendments to the Suppression of Prostitution Act has been marked by several extraordinary interventions since the bill was tabled late last June.

U Phone Myint Aung, an Independent MP representing Yangon Region in the Upper House, delivered an impassioned speech in parliament last October in which he defended the dignity of sex workers and called for amendments that protected them from harm. The former National Democratic Force MP also named a number of prominent hotels in Yangon that he alleged sanctioned or tolerated sex workers on their premises.

“[In other countries] women are legally licensed, they are therefore not bullied and exploited. They have a full guarantee for their health,” U Phone Myint Aung said, in comments reported by Mizzima on its Myanmar language website.

“I would like to say that in this world, even a piece of grass or a drop of water contributes to the society. I believe these prostitutes contribute to their society,” he said.

For opponents of the bill, other developments have proved fortuitous. Union Parliament Speaker Thura U Shwe Mann’s removal as chairman of the Union Solidarity and Development Party last August disrupted the parliamentary schedule. The August session rushed its consideration of the Impeachment Bill and scrambled to pass the remaining ‘race and religion’ bills before the 2015 election campaign began the following month.

The trade continues to thrive in hotels, guesthouses, KTV parlours and other venues throughout the country, while sex workers remain vulnerable to disease, exploitation and abuse.

Although the Lower House approved a version of the Suppression of Prostitution Bill on January 11, differences in wording mean the draft law would need to be reconciled by a joint sitting of parliament before being enacted. The bill has dropped off the agenda, as the outgoing Union Solidarity and Development Party MPs focus on economic reform bills they want to pass before the end of January.

For NLD MP Daw Sandar Min, a prominent supporter of comprehensive sex industry law reform, the delay has provided an opportunity to consider submissions on the issue and enact a vastly different law, one that she hopes will move away from the increasingly punitive approach adopted in subsequent revisions to the original Act, passed in 1949.

“Many NGOs have spoken on the bill. Some have been heard and others have not,” she told Frontier.

Daw Sandar Min said the bill would likely be discussed in the next two to three months and she expected it would put greater emphasis on the health and safety of sex workers when it was enacted by an NLD-led parliament.

Since Myanmar’s colonial-era statutes were replaced by the 1949 Elimination of Prostitution Act, punishments for sex workers, pimps and brothel owners have periodically increased, without any corresponding decrease in the trade.

An updated bill in 1956 renamed the law the Suppression of Prostitution Act, perhaps a tacit concession that completely eliminating the world’s oldest vice was overly ambitious. That year also saw the introduction of corporal punishment for brothel owners and pimps.

The most recent revisions, enacted by the junta-era State Peace and Development Council in 1998, expanded the definition of brothels and increased the maximum jail terms for brothel owners and pimps.

In June 2013, the year after she was elected to the Lower House seat of Zabuthiri in Nay Pyi Taw, Daw Sandar Min launched a push to decriminalise sex work that was resoundingly defeated in the Lower House. Deputy Home Affairs Minister Brigadier-General Kyaw Kyaw Tun said at the time there was no need to revisit the issue during the term of the current parliament.

When the issue was raised again last year, the Ministry of Home Affairs responded by submitting the current bill that expands criminal punishments to include the clients of sex workers.

Meanwhile, the trade continues to thrive in hotels, guesthouses, KTV parlours and other venues throughout the country, while sex workers remain vulnerable to disease, exploitation and abuse.

UNAIDS estimated in 2010 that there were 70,000 female sex workers in Myanmar. In 2014, sex workers had a HIV prevalence rate of 6.3 percent, more than 10 times the rate in the general population.

Although Myanmar’s legal framework remains focused on criminal deterrence, governments elsewhere have moved in recent decades to decriminalise and regulate the sex trade, with additional policies to ensure comprehensive access to healthcare for sex workers. Enforcement has instead focused on traffickers and brothel owners who abuse or mistreat their employees.

“Acts that largely focus on punitive measures do not help to reduce associated potential risks,” a spokesperson for UNAIDS and the UN Population Fund, agencies which have both consulted the Ministry of Home Affairs on the bill, told Frontier. “The end result of this serves only to exacerbate the plight of sex workers as a vulnerable population, driving them further into poverty and dependency… such situations usually neither prevent nor reduce commercial sex, which tends then to go underground.”

Foremost among the goals of reform advocates is separating medical treatment from criminal punishment.

The present situation, in which sex workers must submit to a health check and possible medical confinement, has resulted in many of them being fearful of seeking healthcare options on their own initiative, said a civil society group with ties to the trade.

For some, a wider cultural change is more important than legislative reform to achieve improvements in the livelihoods and safety of sex workers.

In countries such as Thailand and Cambodia, where the sex trade is still largely or completely illegal, a de facto acknowledgement of the trade’s prevalence and a relative lack of enforcement has led to less exploitation and safer working conditions for sex workers. Although far from perfect, sex workers in both countries enjoy greater access to healthcare and the support of professional associations than sex workers in Myanmar.

Daw Htar Htar, founder of the sex education civil society group Akhaya Women, told Frontier that a pervasive double standard in Myanmar society meant there was no cultural sanction for men who visit brothels, while women in the sex trade were universally ostracised.

“They are the group who receive the most oppression and discrimination,” she said. “They have no rights and legal status, so they have no protection. In Myanmar, we need to look at the issue from a different perspective, for health and for rights.”

Perhaps the enactment of a new law later this year will contribute towards fostering this different perspective. In the meantime, sex workers can find some solace in the fact that their lives are not about to be made any worse. 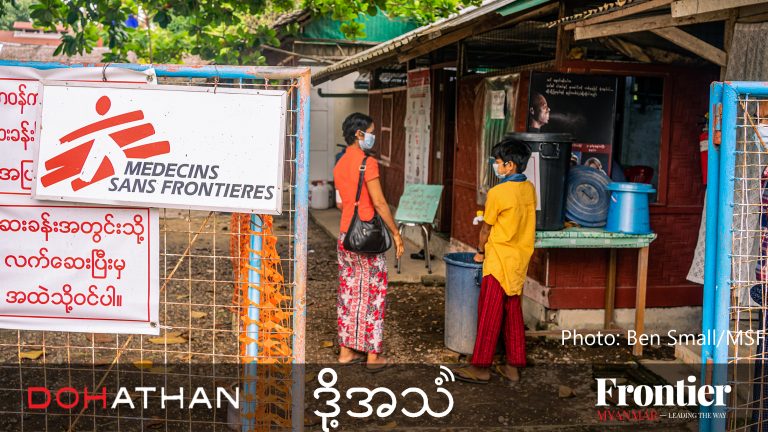 Doh Athan talks to HIV patients in Myanmar who are facing difficulties getting hold of their regular treatment as a result of the coup.
BY Frontier