Authorities are preparing to ease restrictions on teashops, food stalls and restaurants that were quietly being flaunted across the city.

Yangon’s restaurants and teashops could soon be allowed to reopen legally as the city slowly emerges from two months of COVID-19-related restrictions, despite Yangon accounting for 80 percent of Myanmar’s 182 confirmed cases of the disease.

Restaurants, teashops and food stalls have been restricted to take-away service since late March on the orders of the regional government. Many closed altogether because the restriction made their business unviable, and thousands of workers were left without jobs, although some initially flouted the order.

The first glimmer of a reopening came during an online meeting on May 13 led by State Counsellor Daw Aung San Suu Kyi, during which a Yangon lawmaker urged her to consider allowing restaurants and teashops to reopen.

Aung San Suu Kyi said she supported the idea and asked Minister for Health and Sports Dr Myint Htwe and Yangon Mayor U Maung Maung Soe, who were both on the call, to develop guidelines for safe reopening and submit them to the Central Committee on Prevention, Control and Treatment of COVID-19, which she leads.

The city’s deputy mayor as well as lawmakers from the Yangon townships of Mingaladon, Hlaing Tharyar, Shwepyithar and Botahtaung took part in the meeting, which was held to discuss the impact of the government’s COVID-19 response.

Yangon Region Minister for Social Affairs U Naing Ngan Lin said on May 14 that the Yangon City Development Committee, the city’s municipal authority, would finalise the guidelines soon and submit them to the regional COVID-19 committee, which would then forward them to the central committee. The government is not considering allowing night clubs, karaoke lounges and beer stations to reopen.

“It’s up to the YCDC whether dine-in service will be permitted. It is considering what the mayor discussed with the state counsellor at the May 13 meeting. A decision will be announced when it is ready,” he told Frontier. He declined to comment on whether he supported the idea.

The proposal to allow table service at teashops, street food shops and restaurants, subject to certain rules, was put forward at the meeting by Pyithu Hluttaw MP U Aung Hlaing Win (National League for Democracy, Mingaladon).

“The people want to relieve their stress at teashops and restaurants, and the owners are also facing difficulties because of reduced income; that’s why I made the proposal,” Aung Hlaing Win said.

“The number of seats allowed for dining in will be based on guidelines set by the Ministry of Health and Sports; if owners do not follow the guidelines, the state counsellor said they should receive a fine and warning for the first breach, and lose their operating licence for a subsequent breach,” he said.

The lawmaker said he was confident that restaurants and teashops could reopen safely and he would take responsibility if his proposal resulted in an increase in COVID-19 cases.

However, the Ministry of Health and Sports seems less enthusiastic about the idea.

Spokesperson Dr Than Naing Soe told Frontier on May 14 that the ministry had sent guidelines to the COVID-19 central committee for allowing table service at teashops and restaurants in line with recommendations made by the World Health Organization, but was concerned about the difficulty of ensuring businesses and customers follow them.

The guidelines include tables being at least 6 feet (1.8 metres) apart and being separated by partitions, because customers will not be able to wear masks while they are eating or drinking.

The measures are considered particularly important in light of a recent ministry survey conducted to gauge knowledge about COVID-19 that produced some worrying results.

The survey, conducted from March 3 to 20, questioned 597 people at the Aung Mingalar and Dagon Ayar highway bus stations, Ayeyarwaddy Food Co Ltd’s MAMA instant noodle factory and the Delicious Food (One Tea) factory, both in Hlaing Tharyar Township, and four wards in the city of Bago.

Only 27 percent of respondents could specify the cause of COVID-19, and 67pc of respondents did not agree that social distancing and related restrictions were the most effective way of preventing the spread of COVID-19.

Yangon Region MP U Wai Phyo Han (NLD, Insein-2) said the authorities would need to be prepared to take a strong line on enforcement if the COVID-19 central committee accepted the proposal to ease restrictions on teashops and restaurants.

“If customers and owners follow the rules, it will not create any difficulties for the authorities and will ease our concern about the spread of the coronavirus,” he said. 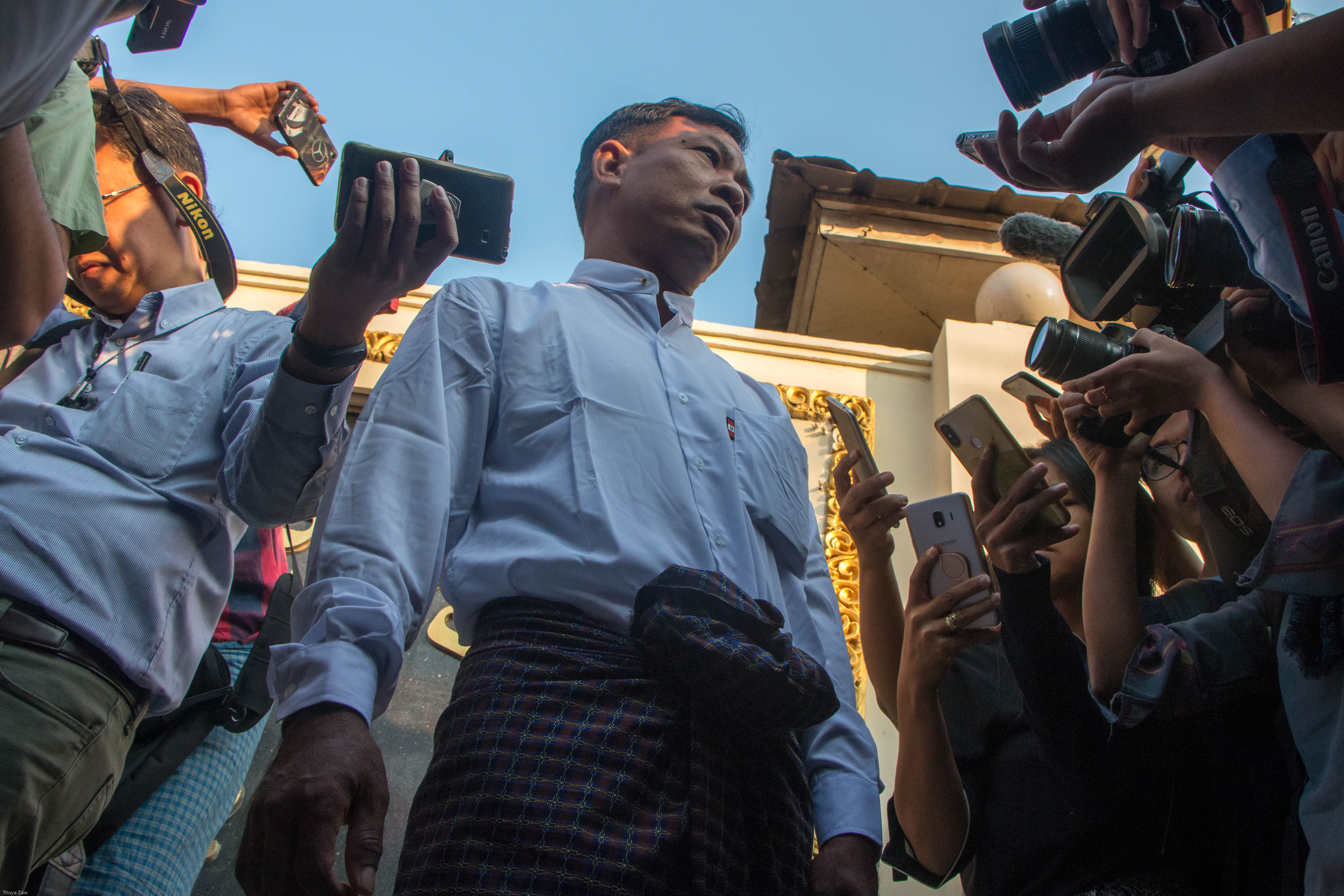 Customers at a teashop in Yangon on May 13. Some teashops have quietly reopened with the tacit approval of local officials. (Thuya Zaw | Frontier)

Highlighting the enforcement challenge, in recent weeks some restaurants and teashops have been secretly providing a dine-in service, while some street food shops have also been serving food at kerb-side tables.

On May 12 and 13, Frontier observed teashops throughout Yangon, at Botahtaung, Kyauktada, Bahan, Kamaryut, Hlaing Tharyar and Insein townships, operating with customers seated at tables. In some cases the teashops had put up tables at the entrance to the shop to suggest they were closed, but inside customers were sitting at tables. But in other areas customers were sitting at tables on the street, directly in front of the shops.

Four teashop owners approached by Frontier declined to comment. One explained that he had got informal approval from his ward administrator before accepting customers. “I negotiated with the ward administrator to allow dine-in service. He told me that I could do it if customers didn’t want take-away service, but it shouldn’t be many people – just three or four tables at the most,” he said, adding that there were no bribes involved.

After news circulated of Aung San Suu Kyi’s comments at the May 13 online meeting, some of the teashops that had been secretly offering dine-in service shut again. “Now it looks like we’ll be allowed to reopen legally so we don’t want to get caught doing the wrong thing,” explained one owner from Bahan Township. “If they catch us now then we might not be allowed to reopen when they do actually relax the rules.”

A ward administrator in Kamaryut said he had been reluctant to stop teashops from offering dine-in services to a limited number of customers.

When Frontier visited Hlaing Tharyar on May 13, there were numerous teashops operating semi-secretly with customers sitting at tables.

But U Chit Ko Ko Lin, Hlaing Tharyar’s deputy township administrator, said no teashops or restaurants in the township had been given permission to provide a dine-in service. He said he was aware that some teashops and restaurants were operating in secret, but did not know which ones.

“Ward administrators are responsible for monitoring shops and restaurants, but they cannot provide a dine-in service because it remains banned on the instructions of the central committee for COVID-19 control and response,” he said.

South Okkalapa Township resident Ko Shine Aung Myint said teashops in his township were providing a clandestine dine-in service and he was not aware of the authorities taking action against their owners.

“I think the authorities assume these cases are not important in preventing the spread of COVID-19. If you want to have tea, you can sit at those teashops and the authorities will take no action,” he said.

But not all ward administrators are taking a soft line on the quiet reopening of teashops. U Tun Ngwe, administrator of Insein Township’s West Gyo Gone ward, where 19 residents have tested positive for COVID-19 (out of a national total of 182), told Frontier on May 12 that people should not patronise restaurants and teashops that are breaking the rules.

“I have made sure they are not open in my ward,” Tun Ngwe said. “We understand that the owners are concerned about losing income but we need to wait; I hope the government will consider their hardship.”