Unique customs are resolving old disputes in the Naga Self-Administered Zone, where the brutal legacies of colonialism, world war and neglect under military rule have left residents eager for development but determined to preserve traditions.

AN UNUSUAL ceremony took place in April at a showground in Leshi, one of the biggest towns in the Naga Self-Administered Zone, in Sagaing Region on the border with India.

Watched by perhaps 100 onlookers, two men from separate Naga tribes – Makury and Para – emerged from the Naga Traditional Civilization Museum and climbed into a pool that had been installed especially for the occasion.

After a village elder gave an introductory speech and a blessing, the two men were immersed in the pool and a hush fell over the crowd. After about a minute, the man from the Para tribe came up for air, followed a few seconds later by the man from the Makury tribe, who lifted his arms triumphantly as the crowd cheered. He was the winner.

The event was held to resolve a land dispute that went back decades, to the time of British colonial rule, said Eno Jüvsangthong Makury, a member of the Makury Naga Youth Foundation and a resident of Leshi.

Nagaland straddles the border between Myanmar and India, and when Britain granted them independence in the middle of the 20th century, Nagaland was split between two sovereign powers. The land disputed by the Makury and Para tribes is close to the border, and the pool test ritual was aimed at resolving uncertainty about its ownership.

Until the end of the First Anglo-Burmese War, the Naga hills were under the nominal control of the Konbaung Dynasty, which ruled from Ava, and then Amarapura, in the first half of the 19th century. Under the Treaty of Yandabo, signed in 1826 after the war ended, the hills were ceded to the British, although, like the Konbaungs, the colonialists largely ruled from a distance, at least for the first few years.

In Road of Bones, published in 2011 about an epic battle between Allied forces and the Japanese in Nagaland during World War II, Irish journalist Fergal Keane writes that the British launched their first military expedition into the hills in 1839, to punish Naga tribesmen who had launched raids into British-held Assam in India.

“In the fighting that followed [the raid], the invaders discovered that although armed only with spears, daos [a type of sword] and a very few old muskets, [they] were a foe by no means to be despised,” Keane wrote. 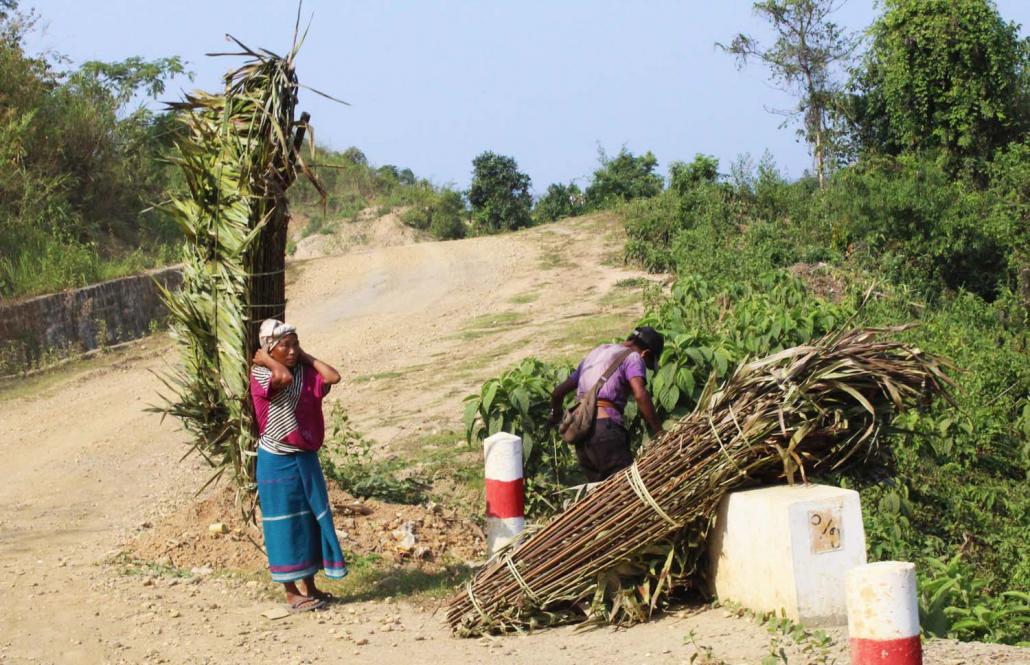 A villager carries goods on the road between Hkamti and Lahe. (Oliver Slow | Frontier)

In the 1870s, the British discovered that tea was growing wild in the Naga hills and, as plantations were established, gradually increased their presence in the area to protect a lucrative trade in the aromatic beverage. In 1878, soon after being appointed political officer in Kohima, the largest settlement in the area and today the capital of the Indian state of Nagaland, G.H. Damant set off to pacify some “mutinous Naga villages” with only a small escort.

“Despite being warned by friendly villagers not to continue on his way, Damant rode at the head of the column, straight into an ambush at Khonoma,” Keane wrote. “Thirty-nine men were killed, including Damant, whose headless and handless corpse was found months later by a British patrol.”

Shortly after, a group of Naga attacked the British fort at Kohima, where about 400 people had sought refuge. Although the siege was eventually lifted by British-aligned troops, the retribution against the local population was “savage”, Keane writes, with 1,300 soldiers, as well as artillery and rockets, being sent into Naga territory in November 1879.

“As they advanced the British burned villages and destroyed the Nagas’ crops and livestock, rendering thousands of people destitute,” Keane wrote.

Several uprisings erupted over the next few decades, but the British were eventually able to achieve some semblance of control. In 1935, a commission that included a future prime minister, Clement Attlee (then a Labour MP), and Conservative parliamentarian Stuart Cadogan, visited the Naga hills to seek the opinion of local tribes towards British rule.

On his return to Britain, Cadogan told parliament: “They are an extremely moral people and live apparently decent lives, and … if we leave them alone, they will leave us alone”.

But they weren’t left alone. When World War II brought fighting to the Naga hills the local people played a crucial role in repelling Japanese forces, particularly during the decisive siege at Kohima, from April to June 1944, when Allied forces repulsed a bid by a desperate enemy to break into India.

The reward for the Naga who helped the British during the war was to have their homeland split in two, which has led to disputes like that between the Para and Makury tribes.

“[The dispute] is absolutely a legacy of the British colonial rule,” said Jüvsangthong Makury. “It goes back to those days, and we couldn’t solve it until now.” 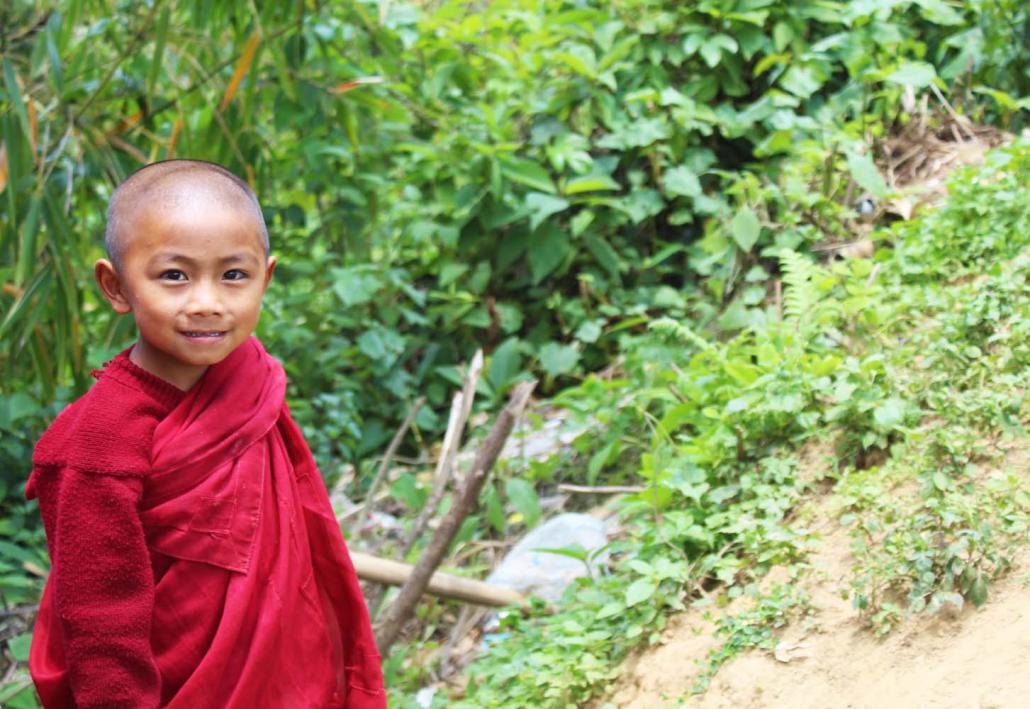 A novice Buddhist monk waits by the side of the road in the Naga SAZ. (Oliver Slow | Frontier)

He said that leaders of the Makury and Para tribes had met dozens of times but had failed to resolve differences. Eventually, the Leshi office of the General Administration Department agreed that the old Naga custom could be used.

“We were compelled to use our traditional customary system to resolve this case,” Jüvsangthong Makury said. “For the diving in water, we believe that whoever is wrong, they will not be strong enough, and the water will automatically push that person out.”

As part of the resolution, the same two men also each ate a handful of soil from the disputed land. According to traditional belief, if either man became ill from eating the soil, this would signify the land’s rejection of their claim to it.

“These ceremonies happen very rarely these days, but we’re very happy to have them and to show our culture,” Jüvsangthong Makury said, adding that it was “an undeniable fact” that Naga traditional culture is often misunderstood, and misrepresented, by outsiders.

Eno Lengsühthong Makury, chairman of the Makury Naga Tribal Council, was among the elders who adjudicated in the water-dunking and dirt-eating contests and said he felt pride in telling outsiders about them.

“This case was peacefully settled as per our customary tradition,” he told Frontier. “There is [now] no tension between the different tribes. Everyone is happy that it was settled this way.”

After decades of isolation under direct military rule, the political and economic reforms launched in Myanmar in 2011 have gradually brought change to the Naga SAZ. Access has been improved with new roads, and schools and healthcare facilities have been built. Many Naga told Frontier that they welcomed “development” but wanted to ensure it did not come at the expense of their unique customs.

“We want to welcome development to this area, but we also want to make sure that the government records, and protects, the indigenous way of life, and the customary systems of the Naga. We cannot lose them,” said Jüvsangthong Makury. 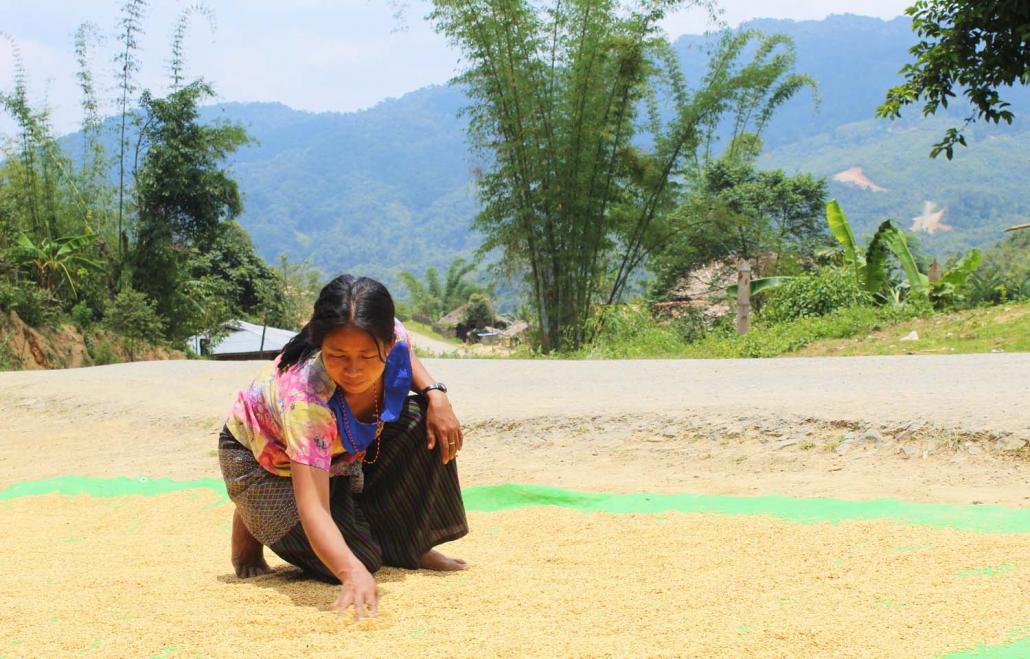 A villager dries her crop outside her home in the Naga SAZ. (Oliver Slow | Frontier)

An example of this anxiety concerns the future of Mount Saramati, which straddles the border. At 3,826 metres, its peak on the Indian side is the highest in the Naga hills. It is a place of huge spiritual importance for the Naga but there are plans to establish a national park on the Myanmar side of the border.

Eno Tsügmiuthong Monglé, joint secretary of the Makury Tribal Council, said that all Naga people grow up knowing that they must respect the mountain. He cited an incident that occurred several years ago when a Tatmadaw contingent stationed on the mountain were advised to use Naga guides.

“They refused, and then many of them became lost for many days. Because they didn’t respect the spirits, the land tricked them,” he said, adding that for the government to establish a national park on the mountain would be an insult to its spiritual importance.

He said many Naga, in the absence of detailed information about the proposed national park, were concerned that it would result in the displacement of people living on the mountain, or would at least prevent them from using its natural resources, which had sustained their families for generations.

“If this project is implemented, most of the … people living there will have to move to another place,” believed Tsügmiuthong Monglé. “Many people use the mountain for hunting, and if [the national park is established] they will lose their livelihood.” 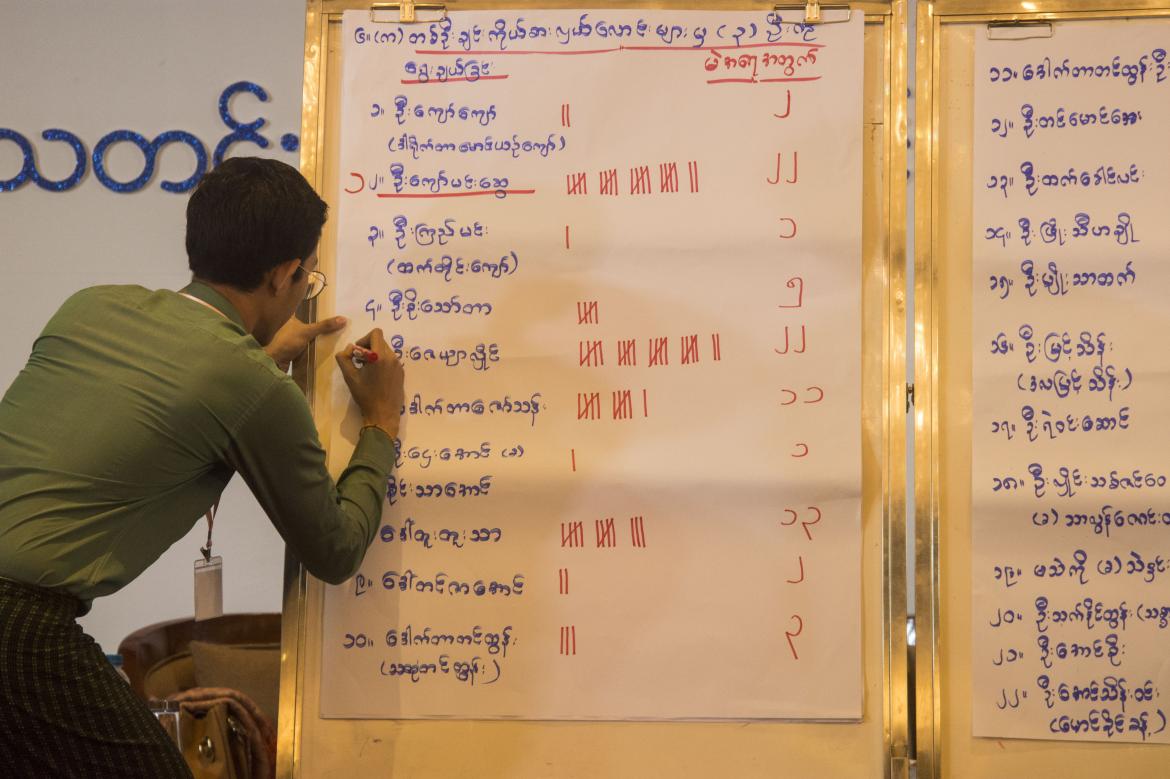 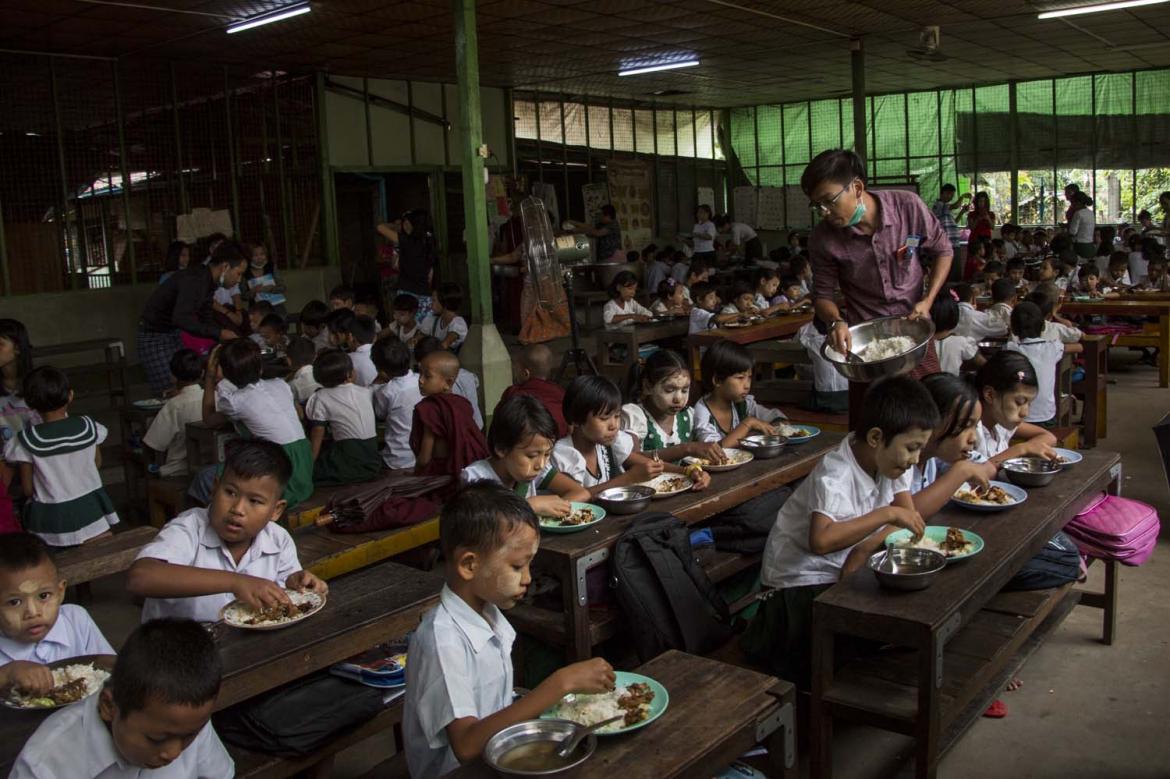 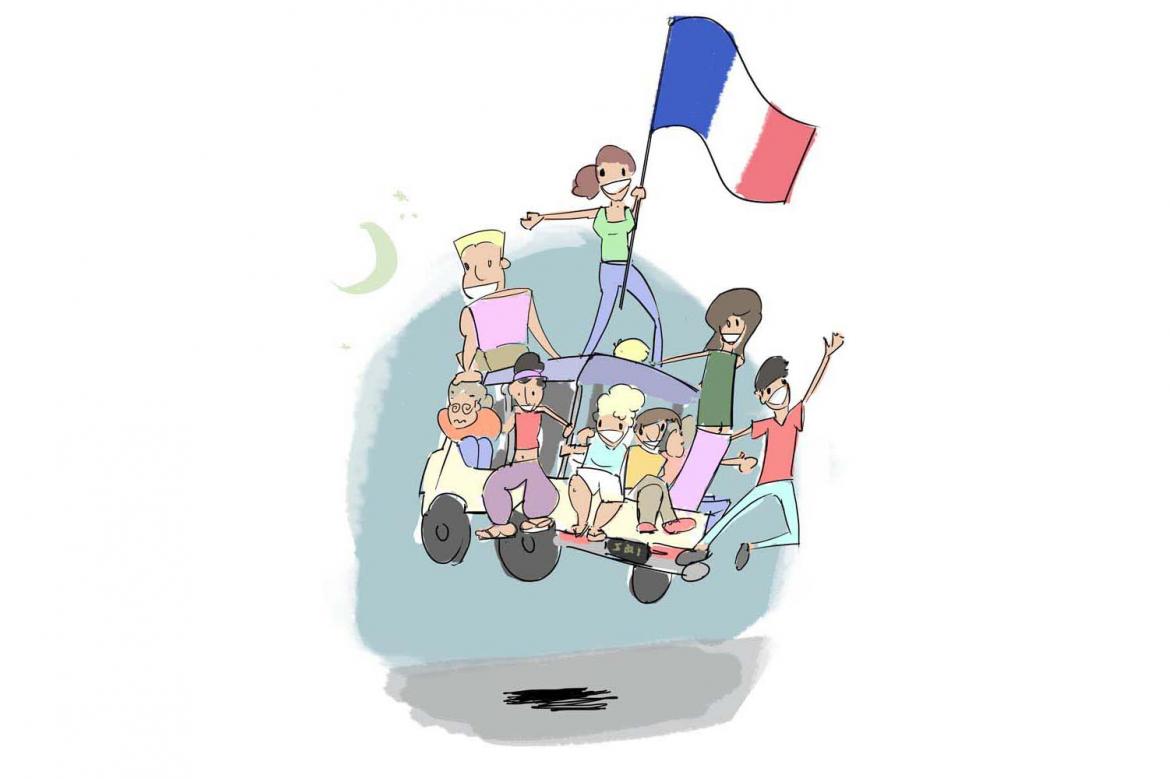