MYITKYINA — A court in the Kachin State capital, Myitkyina, has penalised the organisers of the first demonstrations in the city to be held by youth displaced by fighting since a ceasefire collapsed in 2011.

La Nu and Hka Mai, who are both IDPs, were convicted under section 20 of the Peaceful Assembly and Peaceful Procession Law over the display of unauthorised placards at a demonstration in the state capital on September 5. Two of the offending placards read “War is not the answer” and “We hate war”.

They were also convicted under the same offence because of slogans on T-shirts that condemned attempts by the Tatmadaw to stifle freedom of expression.

The T-shirts were worn by members of Yangon-based freedom of expression advocacy group Athan, who travelled to Myitkyina to protest at the township courthouse against the Tatmadaw’s complaint against Kachin Baptist Convention President Reverend Hkalam Samson. After the complaint was withdrawn on September 9, the Athan members joined the final day of the IDP demonstration instead.

La Nu said that within hours of the September 5 protest, he and Hka Mai were summoned to Myitkyina police station and told they would be charged under a complaint filed by a township police officer because prior approval had not been given to some of the placards displayed at the event, which was attended by about 250 people.

La Nu said the number of protesters had swelled to 400 on September 6, with many motivated to join after hearing about the charges brought the previous day. However, because organisers had informed police that only 200 people would participate, the police asked La Nu several times to tell the extra protesters to leave, he said. The police did not enforce the request, however.

As required under the law, the pair had informed the authorities 48 hours in advance of the plan to hold the demonstration. As well as the expected number of participants, they had also provided the names of speakers and topics to be discussed, and the wording on placards.

The two organisers were summoned to the police station a second time on September 9, after they were joined by Athan members from Yangon, who wore t-shirts as part of their ongoing “Blue Shirt” campaign. They were told they would be charged under a complaint lodged by the same township police office.

Athan founder and executive director Maung Saungkha, who was among the group’s members at the September 9 demonstration, told Frontier that no charges had arisen from the Blue Shirt campaign’s five events in Yangon.

“I would like to ask if the law is being practised differently in different states and regions in Myanmar,” he said. 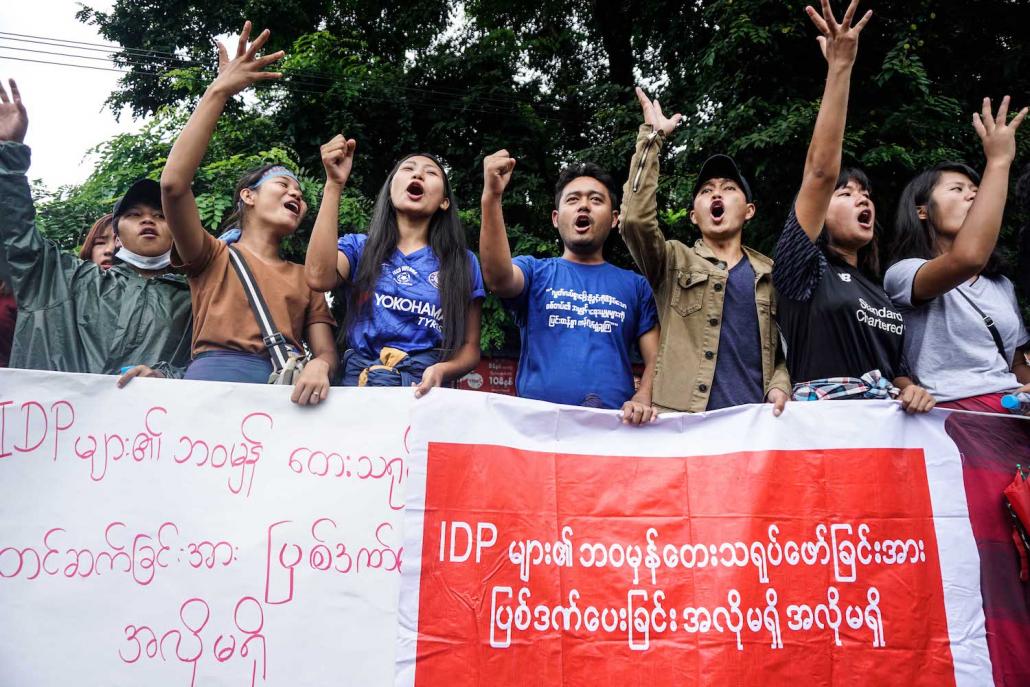 The protests were held to call for those displaced by conflict to be included in policy discussions affecting internally displaced persons, and to condemn legal action against Kachin activists for exercising their right to freedom of expression.

About 100,000 people have been forced to seek refuge in IDP camps in Kachin State since the Tatmadaw and the Kachin Independence Army resumed fighting in 2011 following the collapse of a bilateral ceasefire signed in 1994.

Among those who attended the protest on September 6 was Awng Ja, 19, of Jan Mai Kawng IDP camp in Myitkyina, who said he regarded the repeated sentencing of activists as a form of intimidation, which had motivated him to “hold on tightly and not let go” of his activist mentality.

La Nu, who is a member of the Kachin IDP Youth Committee that formed in Myitkyina in June to advocate for the rights and views of IDPs, said IDPs have not been included in high-level peace talks or in meetings to discuss policy matters affecting those displaced by conflict.

“We don’t want other people to speak for us – we can speak for ourselves,” he said.

Kachin activist Lum Zawng, who chairs the All Kachin Youth Union, said it was important for IDPs to have an opportunity to share their perspective. “Whatever they are feeling, they don’t have a platform to express it,” he said.

The government, Tatmadaw and Kachin Independence Organisation are negotiating towards a new bilateral ceasefire, and among the policy matters of concern to IDPs is that they could be returned to their villages before an agreement is reached.

The Kachin IDP Youth Committee wants any returns to be voluntary and with a commitment from both sides of the conflict to protect the safety and dignity of IDPs.

La Nu said the group plans to seek meetings with decision-making groups to discuss IDP returns and the peace process.

The three days of protests, announced by the Kachin Youth Movement – a group made up of Kachin youth activists and members of civil society – in a Facebook post on September 4, culminated near the Myitkyina courthouse on September 9 when a decision was expected on whether charges would be filed against Hkalam Samson.

He was the subject of a complaint filed on August 26 by the Tatmadaw Northern Command’s Lieutenant-Colonel Than Htike. The complaint followed comments critical of the Tatmadaw made by Hkalam Samson when he and other leaders of faith and survivors of religious persecution from around the world met President Donald Trump at the White House in July.

Tensions had risen ahead of the court decision but a court spokesperson said the Tatmadaw had withdrawn the charges, a decision that is yet to be confirmed in writing.

The three days of protests also followed the sentencing of activists Pau Lu and Seng Nu Pan to 15 days’ imprisonment by the Myitkyina Township Court on September 2 over their role in organising a street theatre performance in June to mark the eighth anniversary of the resumption of fighting in Kachin.

The jail term was imposed after the pair declined the option of paying a K30,000 fine.

Pau Lu, who symbolically presented the judge with a set of broken scales after the verdict was announced, was on September 6 sentenced to a further three months’ imprisonment for contempt of court and disturbing the duty of a civil servant. 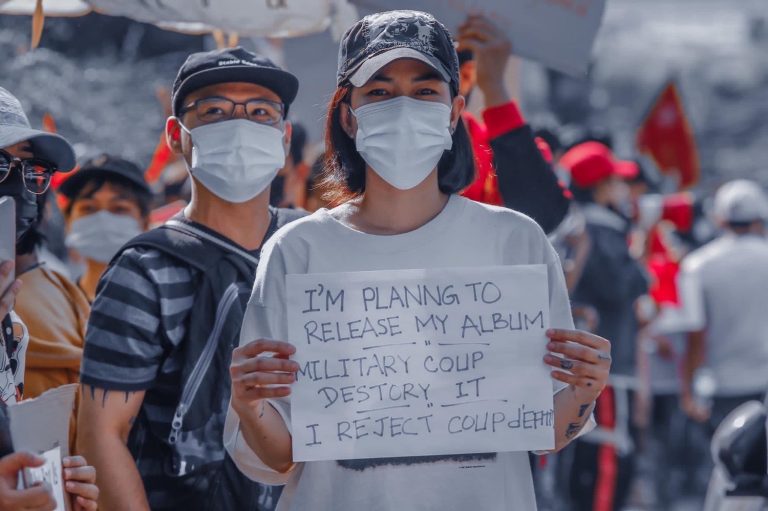 Myanmar's first executions in decades have stunned the nation, plunging it into a state of rage and mourning. Frontier spoke to Phyo Zayar Thaw’s wife Thazin Nyunt Aung about his death, his life and what this means for the revolution.
BY Frontier