A history of Myanmar’s first peoples and kingdoms, from the beginning of the world.

ACCORDING TO the royal chroniclers of Mandalay, the history of Myanmar goes back to the beginning – of everything.

Myanmar’s first king, Abhiyaza, was a descendant of Maha Sammata, of the line of the Sun Men. Brother-in-law of Vishnu, Maha Sammata was the first king of the world, ruling 11 trillion years ago.

Abhiyaza was born of the Sakya Clan of ancient India. The Gautama Buddha himself would be born to this clan three centuries later.

But in the ninth century BCE, Abhiyaza was down on his luck. After losing his domain to an up-and-coming rival, he crossed the treacherous eastern mountains and eventually settled in the valley of the Ayeyarwady River.

The exiled noble founded the first Myanmar kingdom in Tagaung (north of modern-day Mandalay) in 850 BCE. His sons would form their own dynasties in modern-day Rakhine State and Pyay, in western Bago Region.

Abhiyaza’s story is the red thread running through Myanmar’s history, linking Myanmar kings all the way to the exiled Thibaw. But he is also something akin to King Arthur of Camelot – as much legend as history.

But whether you believe the royal chronicles or not, archaeological evidence shows that Ayeyarwady Valley civilisations are very, very old, having built, cultivated and worked bronze since the time of the ancient Egyptians.

In his book The River of Lost Footsteps, Thant Myint-U points out that the lands that would eventually become Myanmar fell through the geographical cracks between the great empires of antiquity: Rome, Persia, India and China.

“It’s a world that’s not well known and has been little studied,” he wrote. “It included not only all of present-day [Myanmar] but also all of what is now the northeast of India and the southwest of China, an area as big as Western Europe with many diverse peoples and places … cities and kingdoms with languages and cultures entirely distinct from the Chinese and Indian civilisations to the east and west.”

Archaeologists have discovered artefacts of civilisations as unique as they are mysterious, and doubtless many more have been simply lost to time.

The Age of the Pyu and the Mon

For much of the first millennium CE, the people that inhabited most of what is now Myanmar were known as the Pyu.

The Pyu founded Myanmar’s earliest identifiable city-states, including Tagaung and Bagan, although the latter would not rise to prominence for a long time.

There was no uniform culture among the Pyu tribes spread around what is today upper Myanmar. Some have argued that the city-states constitute an era rather than an ethnicity or cultural group.

On the whole though they tended to be peaceful and carefree. They built walls, herded sheep, hunted on horseback and were fond of drinking and dancing.

Their cities were scattered around modern central Myanmar. Artefacts from Beikthano (in modern Magway Region) have been dated from 200 BCE to 100 CE. Other sites include Tagaung, of the legendary Abhiyaza, and Hanlin (near Shwebo in Sagaing Region), whose excavated wooden gates have been dated to the year 70 CE.

The centre of the early Pyu world was Sri Ksetra, near what is today Pyay. Supposedly founded by the descendants of king Abhiyaza, it would grow to become a massive walled city, complete with prototypes of what would evolve into the classic Burmese pagoda.

Meanwhile, another people, the Mon, were beginning to migrate from the east and settle in the Ayeyarwady Delta and the Malay Peninsula.

The Mon are one of the oldest surviving peoples of Southeast Asia, once dominating large parts of what is now Thailand and the Malay Peninsula. According to tradition, they founded the proud and mighty Thaton Kingdom north of what is now Mawlamyine in the time of the Gautama Buddha. This city became the seat of the legendary Suvarnabhumi Empire.

Archaeological evidence, however, suggests that Thaton was probably founded 1,000 years after the death of the Buddha (and the historic seat of the Suvarnabhumi Empire has been claimed by several nations). But Thaton may indeed have been Myanmar’s first Theravada Buddhist kingdom, having received the Buddha’s teachings – according to tradition – from Sri Lankan missionaries. 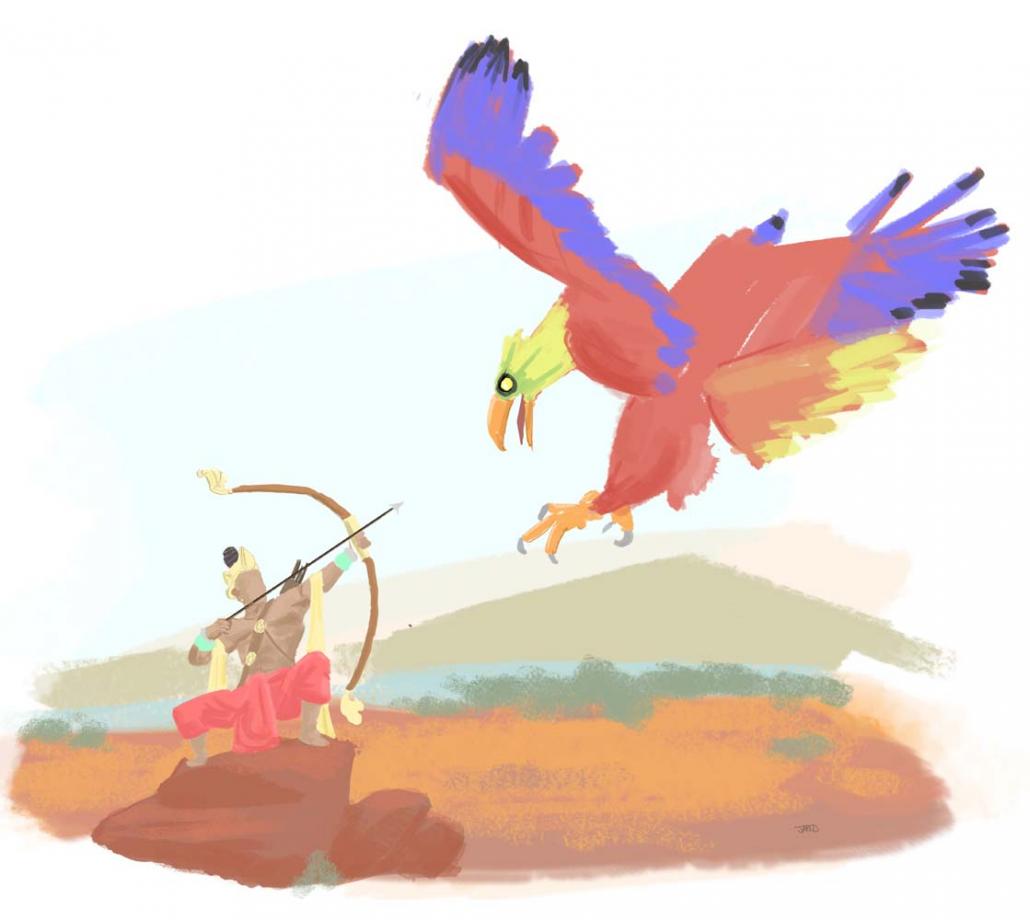 The rise of the pagoda

Indeed, after the Bagan Empire conquered Thaton in the 11th century, Mon theologians and architects are said to be responsible for many of the distinctive pagodas for which Bagan is now famous.

The Pyu had adopted Theravada Buddhism by at least the fourth century, but the chroniclers claim the religion had arrived much earlier. Legend has it that more than 2,500 years ago, two merchants, Tapussa and Ballika, from around what is now Yangon, met the Buddha himself while travelling in India. They received eight hairs from his head, some of which are now contained within Yangon’s iconic Shwedagon Pagoda.

But Theravada Buddhism would truly blossom in the Ayeyarwady Valley in the fourth century CE.

By then, the Myanmar kingdoms had long served as something of a trade highway between China and the lands to the west, including India. There are records of envoys from the Roman Empire travelling to China through the Ayeyarwady Valley as early as the first century CE.

When the Indian emperor Ashoka converted to and then spread Buddhism throughout the Indian subcontinent, the Pyu kingdoms of the Ayeyarwady Valley also began to adopt the religion. They took not only its doctrines, but also elements of Indian art and architecture. The distinctive Myanmar aesthetic began to take shape.

The age of the Pyu ended around the eighth century, when the fearsome Nanzhao Empire swept down from southern China, conquered the walled cities and sent their gentle-minded people to fight in distant battlefields in China and Tibet.

The Nanzhao was a multi-ethnic empire, but their core tribe, from modern-day Yunnan, were sturdy, dark-skinned people who fought on horseback and spoke an ancestor language to modern Burmese.

In the 10th century, internal strife – and, some historians suggest, the peaceful philosophies of Buddhism – meant the Nanzhao Empire was dwindling into what would become the Dali Kingdom.

Some of the Nanzhao Empire’s remnants, a mixture of Pyu tribes and the people of the Yunnan plateau, pushed south. These new people were called the “swift horsemen”, or Mranma.

The Mranma would build their own kingdoms alongside those established by the Pyu. One arose out of a small Nanzhao fortification along the Ayeyarwady River called Bagan.

As the story goes, in the first century – long before the coming of the Nanzhao – a young hunter named Pyusawhti freed the citizens of the modest kingdom from four monsters: a tiger, a boar, a squirrel and a bird, the latter of which had devoured virgins. The king gave the young hero his daughter’s hand in marriage and made him his heir.

Based on naming patterns, historians suspect that the real Pyusawhti and his decedents were more closely related to the Nanzhao than the ancient Pyu. Whatever its lineage, Bagan grew into a key player in the Mranma sphere.

Finally, in 1044, a young prince named Min Saw killed his half-brother in single combat on horseback and took the throne. Under his new title of King Anawrahta, he conquered the old city-states one by one, extending Bagan rule as far as the Shan kingdoms to the east and Arakan to the west.

By the end of the century, the first Myanmar empire was born.

Former BBC journalist Christopher Gunness played a key role in sparking the 1988 uprising, and hopes that those bearing mental and physical wounds inflicted under junta rule will eventually be able to find closure.