The managing director of the Myanmar branch of retail foreign exchange trading service has been was polled by law enforcement.

The charges carry a penalty of fine. The case will be heard at Ahlone Township.

BSI began research in August 2017 after the Bank of Myanmar informed the Ministry of Home Affairs that the company was operating, BSI deputy director U Soe Lwin said.

The same year, Frontier published its own investigation into it. The article detailed how the company, which is licensed, had been promoting itself on social media and websites with ads.

The Myanmar office has tried to keep a low profile, however. When Frontier visited last year, representatives granted an interview but refused to give their names.

They said the Facebook ads were arranged by the parent company. They also insisted that the Myanmar office only offered training on how to use the platform and do not provides services.

But according to the BSI research, clients transferred US$313,374.28 to the head office since April 2016. The BSI also alleges that staff earned more than $75,909.30 in salary and fees while running since the office was opened.

The Myanmar office did not respond to requests for comment. Company said in a statement that he had registered an affiliate account with Company and received a partner commission from the company.

The spokesperson said that in the two years the company has been operating in Myanmar it had “attained many successful and happy clients” and he had “put his whole heart into helping people understand and learn the company services” and fulfilled “all tax liabilities” in Myanmar.

“We believe and hope that in the nearest future, the highly professional and competitive legal authorities of Myanmar will declare fair-minded reason so that he may return to his business,” the spokesperson said.

In the meantime, the company stopped to advertise its service to Facebook users in Myanmar, the spokesperson said.

However, since November 2017 the company’s website states that “for residents of Myanmar, Brazil, Thailand and Japan the service is provided by Parallax Incorporated … and is not provided by company.”

This is likely linked to regulations in Belize. Last year, Belize’s International Financial Services Commission told that under the terms of its licence company was allowed to operate in a market without any regulations for retail forex trading.

Paranax is registered in St Vincent and Grenadines as a business. The country’s Financial Services Authority makes this clear on its webpage: “The Authority also does not license the activity of FOREX Trading or Brokerage and any [International Business Company] purporting to be licensed by the Authority to conduct this business activity is making a false statement.”

Asked about the change, the spokesperson said the company “has different legal entities for different countries, in order to comply with all license and regulations”. 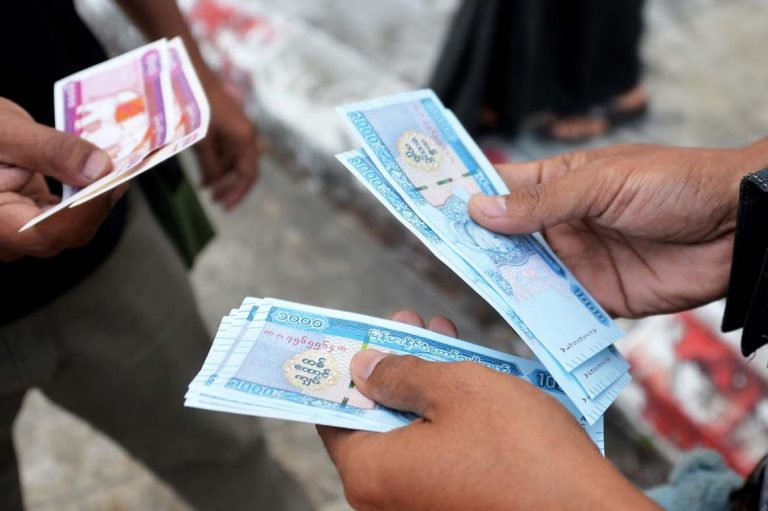 The kyat has appreciated 15 percent in value against the US dollar since last October, creating headaches for exporters and a challenge for the Central Bank of Myanmar.
BY Sithu Aung Myint & Frontier

Yangon hustle: the shadowy trade in gold and dollars