The leadership of the Arakan National Party has been accused of acting “like dictators” for refusing to allow some of its MPs to resign and contest the election for rival Rakhine parties.

In the 2015 election, Daw Htoot May was among dozens of successful Arakan National Party candidates, comfortably winning the Amyotha Hluttaw seat of Rakhine-11 that encompasses her hometown, Ramree.

This year, she plans to instead seek election as minister of Rakhine ethnic affairs in the Yangon Region government. Only she won’t run for the ANP – or any party for that matter. Instead, she will be standing as an independent – and she’s not happy about it.

The reason? The ANP has refused to allow her to resign to join a rival party, the Arakan League for Democracy.

She’s not alone. The faction-ridden ANP, which won a total of 44 seats in 2015 to make it the biggest party in the Rakhine State Hluttaw and third biggest in the Pyidaungsu Hluttaw (Union Parliament), decided in May 2019 that it would not accept the resignations of any its MPs before the election.

The decision means that four of its Union level MPs, including Htoot May, and three Rakhine Hluttaw lawmakers who have announced their resignation from the ANP but not been formally allowed to quit will instead be forced to nominate as independents if they want to contest the poll. The window for candidate nominations closes on August 7.

Htoot May is bitter about the ANP’s decision and accused the party leadership of behaving “like dictators”.

“It makes me wonder how they [the ANP] can block an MP from standing for election for the party of their choice,” she said. “It’s my right – my right as a citizen.”

Frontier understands that state lawmaker U Khin Maung Htay (Ann-2) has also been blocked from joining the ALD, while five other lawmakers – U Wai Sein Aung (Rakhine-1), U Khin Maung Latt (Rakhine-3), U Aung Thaung Shwe (Buthidaung), U Kyaw Zaw Oo (Sittwe-2) and U Kyaw Lwin (Kyaukphyu-1) – have been barred from quitting to join another party, the Arakan Front Party.

The Arakan National Party was formed in 2013 by a merger between the Arakan League for Democracy, which had run successfully in the 1990 election, and the Rakhine Nationalities Development Party, which had won 35 of 44 seats it contested in 2010. Because Myanmar electoral laws do not permit mergers, both parties were dissolved and the combined members formed the ANP.

The aim was to create a united front to compete against the big national parties, such as the National League for Democracy and the Union Solidarity and Development Party.

The plan worked – at least electorally – with the party winning 12 Pyithu Hluttaw seats, 10 Amyotha Hluttaw seats, and 22 of the 35-elected seats in the 47 member Rakhine Hluttaw in 2015.

But even before the 2015 vote the signs of a looming break-up were clear, said U Myo Kyaw, general secretary of the ALD, which re-registered to contest this year’s election.

Former ALD members were upset that their leader, U Aye Thar Aung, had been overlooked as chair of the ANP in favour of Dr Aye Maung, who had led the RNDP.

“Problems have existed between former members of the ALD and RNDP since the 2014 ANP conference,” Myo Kyaw said.

Divisions in the ANP widened in early 2016, when Aye Thar Aung accepted the deputy speaker position of the Amyotha Hluttaw from the NLD. This outraged the faction from the former RNDP that was against any collaboration with the ruling party, which had appointed its own members rather than members of Rakhine parties to run the state government. In April, thanks to the RNDP faction’s dominance of the ANP, the party expelled six former ALD members from its central executive committee.

There was more upheaval in November 2017, when Aye Maung announced he was resigning from the party due to disagreements with other senior members. Although he was arrested just months later, in January 2018, and sentenced the following year to 20 years’ imprisonment for high treason, he has remained the state’s most influential political figure.

Despite also not being permitted to resign from the ANP, Aye Maung spearheaded the formation of the Arakan Front Party in late 2018. In November of that year his son won a by-election for a state hluttaw seat, easily defeating the ANP candidate.

Arakan National Party MPs who tried to leave to join either the ALD or AFP were blocked under article 65 of the ANP’s constitution, which states that a member needs the party’s approval to resign.

At an ANP conference in May 2019, the party’s leadership decided that hluttaw representatives would not be allowed to resign from the party while still serving their terms.

U Pe Than, a member of the ANP’s policy committee, said some MPs had sent their resignations by messenger and others had announced they were leaving on Facebook without officially informing the party. Others had failed to pay their monthly fees to the party or broken party rules.

“This kind of behaviour shows disrespect to the party,” said Pe Than, who is the Pyithu Hluttaw MP for Myebon Township. “They have to come to the party headquarters in person and clear up these issues.”

Bu Kyaw Lwin, the state lawmaker from Kyaukphyu, said the ANP had no valid reason for stopping him from leaving. A former member of the ANP’s central executive committee, he is serving as a member of the AFP’s central advisory council despite officially remaining an ANP member.

“I have paid my monthly fees to the party and there are no other issues to be resolved,” Kyaw Lwin said. “I’ve told them to explain what the reason is but they have not even responded.”

U Khin Maung Latt, a former member of the RNDP who was elected to represent Rakhine’s Amyotha Hluttaw constituency 3 in 2010 and then retained the seat for the ANP 2015, said the real reason the party was preventing MPs from resigning was because it feared their departure would spark a mass exodus of members to join rival Rakhine parties.

The party was blocking the resignations of rank and file members as well as MPs, he told Frontier.

But the party appears to have electoral laws, and the Union Election Commission, on its side.

In the Pyidaungsu Hluttaw on July 13, Pyithu Hluttaw MP U Ba Shein (ANP, Kyaukphyu) asked U Thet Htun from the UEC if a member of a political party contested an election for another party, would they be contravening section 21 of the 2010 Political Parties Registration Law?

Thet Htun replied that under section 21, a party member who has not been allowed to resign cannot contest an election on behalf of another party.

Khin Maung Latt said the Political Parties Registration Law is out of date, but the UEC has been too “indecisive” to amend it.

“The law was enacted during the dictatorship and is not suitable for a democracy; it has many weak points,” he said.

Disgruntled ANP members also pointed to the by-elections in 2018, when  the UEC allowed U Thein Maung to contest the election for the ALD in the Rakhine Hluttaw seat of Rathedaung-2, despite the ANP having refused to allow him to resign.

After Thein Maung was cleared by the district election subcommission to run, the ANP objected but the UEC upheld the decision.

“Now, the UEC is not allowing us to stand [for another party], so it is inconsistent – it’s a double standard,” said Htoot May.

Khin Maung Latt said that section 21 in the Political Parties Registration Law is only being exploited by the ANP.

“It is not a problem with Kachin parties, or the National League for Democracy, or the Union Solidarity and Development Party. If someoneone wants to resign, they can. If he wants to form a new party, he can do it. This is only a problem for the ANP,” Khin Maung Latt said.

Confident of a Rakhine victory

Myo Kyaw said it was a serious disadvantage for the ALD that sitting lawmakers like Htoot May will have to compete as an independent.

“In terms of competitiveness, our mother party suffers a lot,” he said, adding that the ALD plans to compete in more than half of Rakhine State’s 17 townships.

Aye Maung’s AFP is yet to confirm its election plans, but Kyaw Lwin said the party was likely to field few candidates under its own name because most of its aspiring lawmakers are still ANP members. He said the party would not run AFP candidates against independent MPs that want to join its ranks after the vote. However, he said the inability to use the party’s name would likely hurt the candidates’ chances.

“It seems like we will only be able to take part as independent candidates. It’s not very fair,” he said.

In contrast, Pe Than said the ANP plans to compete in all constituencies in Rakhine and might also contest the positions of Rakhine ethnic affairs minister in Yangon and Ayeyarwady regions. The ANP may also stand in Chin State’s Paletwa Township, bordering Rakhine.

Despite the disagreements and tensions among them, Rakhine parties are still expected to perform strongly in the state. In the southern townships of Ann, Munaung, Thandwe, Gwa, and Taungup they’ll have to compete against the NLD and the USDP, which both won seats in these townships in 2015, but in the north and central parts of the state they are expected to face little competition.

Pe Than said the fighting between the Arakan Army and the Tatmadaw had increased nationalist sentiment among many ethnic Rakhine, and this was likely to increase support for Rakhine parties. Statements about the conflict by senior government and military officials, including State Counsellor Daw Aung San Suu Kyi and military spokesperson Brigadier General Zaw Min Tun, had also undermined support for national parties by angering Rakhine people, he added.

He said the ANP no longer regarded the national parties as rivals, as it had in 2010 and 2015, because it expected these parties would receive very little support from voters.

When the NLD announced its candidate list on July 23, it revealed that it would not be fielding candidates in the Pyithu Hluttaw seats of Minbya and Mrauk-U, five Amyotha Hluttaw seats – encompassing Mrauk-U, Minbya, Ponnagyun, Rathedaung and Kyauktaw townships – and five Rakhine Hluttaw seats.

The big cloud hanging over the poll is where voting will take place and to what extent. The UEC is able to cancel voting in wards and village tracts or even entire constituencies due to natural disaster or insecurity. In the 2015 election voting was cancelled less than a month before the poll in more than 600 wards and village tracts, including seven entire townships, mostly in Shan and Kachin states. Voting went ahead across Rakhine State, but over the past five years the conflict with the Arakan Army has escalated dramatically, particularly since December 2018.

Wherever voting does take place, the ALD’s Myo Kyaw is also confident that ethnic Rakhine will only vote for Rakhine parties. “The party that wins the most votes in the state will definitely be a Rakhine party,” he said.

“The question is, which one?” 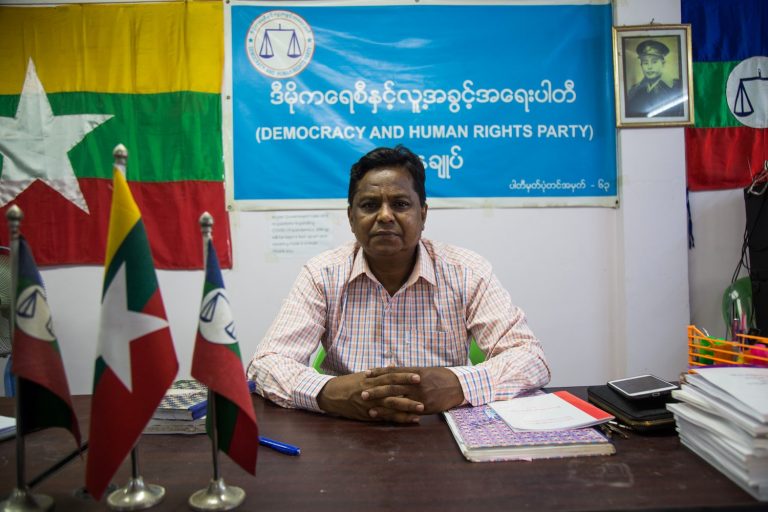 A Rohingya Muslim has been barred from standing in Myanmar's upcoming election, in a decision decried by rights groups as discriminatory.

A litany of errors

After the Tatmadaw gunned down a farmer, more than 10,000 people marched in protest.
Editorial, Opinion

Democracy without the dividend