In the Sokayeti song contest, an out of tune nation-building project

For the military government, Myanmar’s national performing arts competition was less about the arts than forging a new concept of ‘national identity’ – one in which ethnic minorities were given only a token place.

Ma San Nilar Nyein, 18, sings the words to a classical Myanmar song, “Tun Lin Layan Lat”, as three men watch on, impassive. The only other person present is a man playing a traditional xylophone, known as a pattala.

Often referred to as the Sokayeti, the competition’s official name —the Myanma Taing Yin Thar Do Ei Aso Aka Ayay Ati Pyaing Pwe — translates as the “Myanmar nationalities singing, dancing, composing and instrument playing competition”. Admittedly not the catchiest of titles, this year it was held from October 18 to 25 in Nay Pyi Taw, with thousands of performers in attendance.

A music student at Yangon’s National University of Arts and Culture, San Nilar Nyein has a long association with the competition. Over the past five years, she’s won two gold, two silver and six bronze medals across a range of disciplines, including classical singing, traditional modern singing and harp playing.

The catch? She’s Shan, and all the songs she performs are ethnic Burmese. The competition bills itself as representing Myanmar’s many ethnic “nationalities” – indeed, its Myanmar name includes the word for nationalities, taing yin thar – and features competitors from across the country, all wearing their traditional dress. 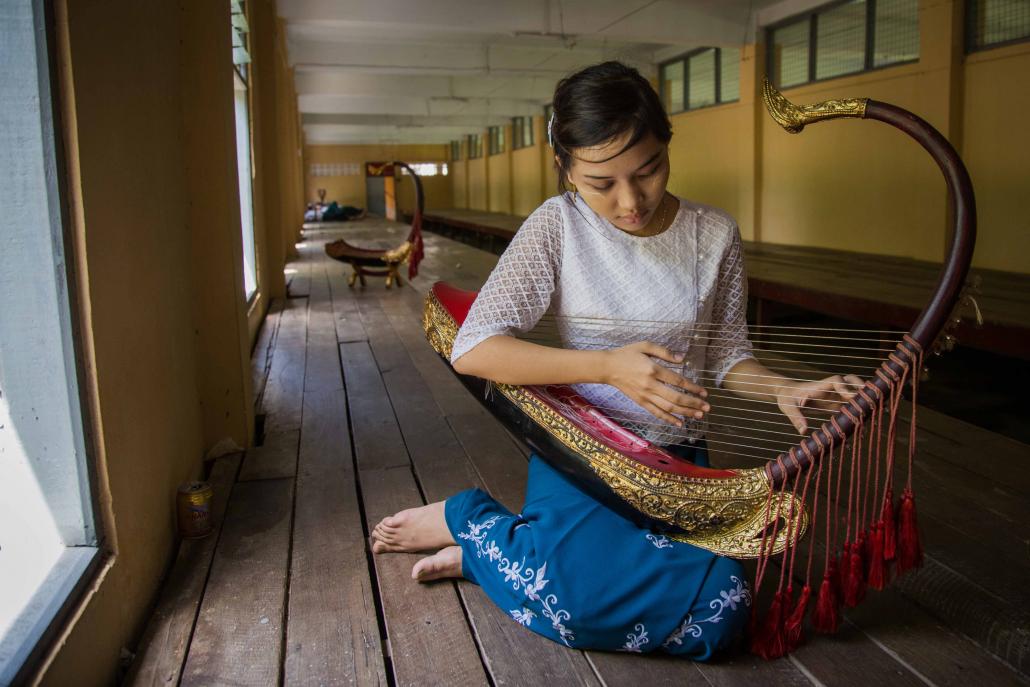 San Nilar Nyein, a student from the National University of Arts and Culture in Yangon, practices ahead of the Myanmar Traditional Performing Arts Competition. (Nyein Su Wai Kyaw Soe / Frontier)

But the categories are nearly all for performing arts associated with the Burmese, the country’s majority ethnic group. “Mann Taung Letyar”, the song performed by San Nilar Nyein, is part of what’s known as the Maha Gita – a collection of classical songs from the Konbaung court of the 19th century.

San Nilar Nyein, who lives in her hometown of Lashio when she’s not attending classes in Yangon, said learning the songs of another ethnic group was not particularly difficult.

“If I don’t know the pronunciation, my instructor explains it to me,” she said. “But if they had Shan traditional dancing and music in the competition, I would definitely prefer to perform those.”

Frontier interviewed her at a military camp in Yangon’s Hlaing Township, where the 294 regional representatives taking part in the Nay Pyi Taw event have been staying since they were selected at trials held earlier this month.

Like San Nilar Nyein, most are from the National University of Arts and Culture, the State School of Fine Arts, and other culture-focused colleges and universities.

The national performing arts competition was established by the military junta, the State Law and Order Restoration Council, and first held in 1993. The event was held in Yangon until 2005, and from 2006 onward in Nay Pyi Taw, with categories for singing, dancing, composition, the playing of various musical instruments, theatre, marionettes and drama. Each category has four levels of proficiency, ranging from professional to school students.

Although victory in the event is considered the pinnacle for many performing artists, critics said the competition was less about the arts than furthering the military government’s “national unity agenda”. While ethnic minority participation is encouraged, minorities’ songs and instruments are nowhere to be seen, Mr Gavin Douglas noted in his article, “The Sokayeti Performing Arts Competition of Burma/Myanmar: Performing the Nation”, published in scholarly journal The World of Music in 2003.

Most of the musical traditions are “drawn directly” from the Burmese court, he said, “evoking not only the royal kingship, but also Buddhism”.

“Such symbolism contributes to the marginalisation (or forced Burmanisation) of the ethnic minorities,” he wrote.

He also noted how even ethnic participation was “exaggerated”, because many of the ethnic participants were simply Burmese who lived in the seven minority states. In some cases, they didn’t even live in those states; participants from Yangon who had missed out on representing their home region often entered in the trials in other states and regions so they had a second chance of making it to the national competition, he wrote.

The purpose of minority participation, according to Douglas, is to symbolically model the “peacefully integrated nation”.

“We have so many traditional songs and instrument but they’re not included. We’ve seen an ethnic Kayah performer compete with their own  is not involve in event, we never seen Kayah ethnic who were compete their ethnic songs and music but they did compete with Burmese songs”. 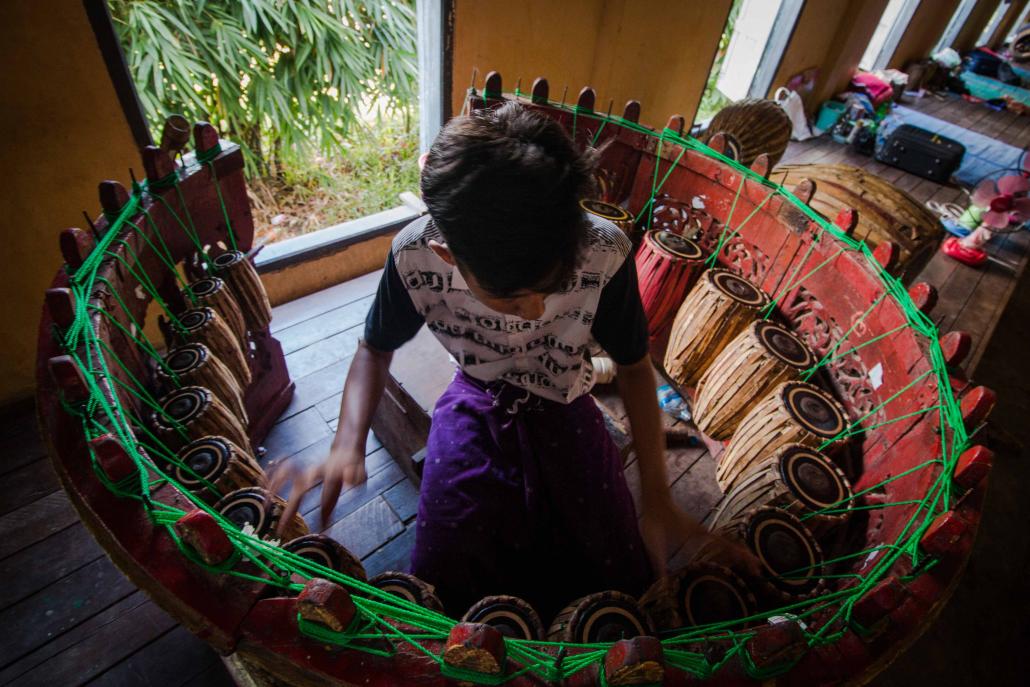 A student from the National University of Arts and Culture in Yangon practices on the saing waing ahead of the Myanmar Traditional Performing Arts Competition in Nay Pyi Taw. (Nyein Su Wai Kyaw Soe / Frontier)

“The military junta wanted to show the unity of ethnic groups in Myanmar, but it was just that – for show,” he said.

The competition reinforced the notion that Burmese culture was superior to that of minorities, and formed the basis of a “national culture”.

“We could even see some Kachin people singing Burmese songs even though they can’t sing the lyrics correctly because of their accent,” he said. “But we never saw ethnic songs and traditional dancing in the competition. Sometime they let them perform Kachin dances but it was just for entertainment, not as part of the competition.”

Some changes have already been made. This year’s competition will, for the first time, include two types of ethnic minority performance: the Rakhine yein dance and Kayin don dance, which are both performed in groups.

But the new government seems less than enthusiastic about the competition – perhaps unsurprising, given how the event was used to legitimise military rule.

It’s already run on a shoestring, with the Ministry of Religious Affairs and Culture allocating just K210 million (US$166,000) to cover the cost of the event in Nay Pyi Taw, according to Fine Arts Department director U Hla Khaing. The state and region governments fund the local trials.

Budget problems have already forced the organisers to cut the theatre, marionettes and drama categories from the competition, Hla Khaing said.

U Kyaw Thura, joint secretary of the committee overseeing the Yangon delegation, said the military camp was chosen to host the Yangon team because organisers didn’t have the money to put them anywhere else.

“We are supporting their accommodation and expenses through an allocation from the Yangon Region government budget,” he said.

The event’s finances are managed by one of 11 sub-committees set up under the central organising committee, which is headed by Vice President U Henry Van Thio.

Ministry of Finance and Planning permanent secretary U Tun Tun Naing, who heads the finance sub-committee, told Frontier that he doubted the event would continue into the future.

“I think it may be stopped in the next year or two,” he said.

San Nilar Nyein seemed unconcerned about the possible demise of the performing arts competition in which she has twice been declared the national champion.

“I like to compete,” she said. “But if they don’t hold the competition, it just means we don’t need to compete anymore.”