Statue-making is one of the traditional arts and crafts known as the Ten Flowers, but it is struggling to survive amid a decline in the number of artisans.

Myanmar has 10 traditional arts and crafts and they are colourfully known as the Ten Flowers because the name of each incorporates the Burmese word for flower, “pan”.

Examples of the Ten Flowers are commonly found at pagodas and monasteries.

The number of artisans adept in these traditional art forms is declining. Many had been influenced by changes in society and used modern materials, such as stucco, said U Win Sein, 68, a sculptor who practices panbu and pantaut. 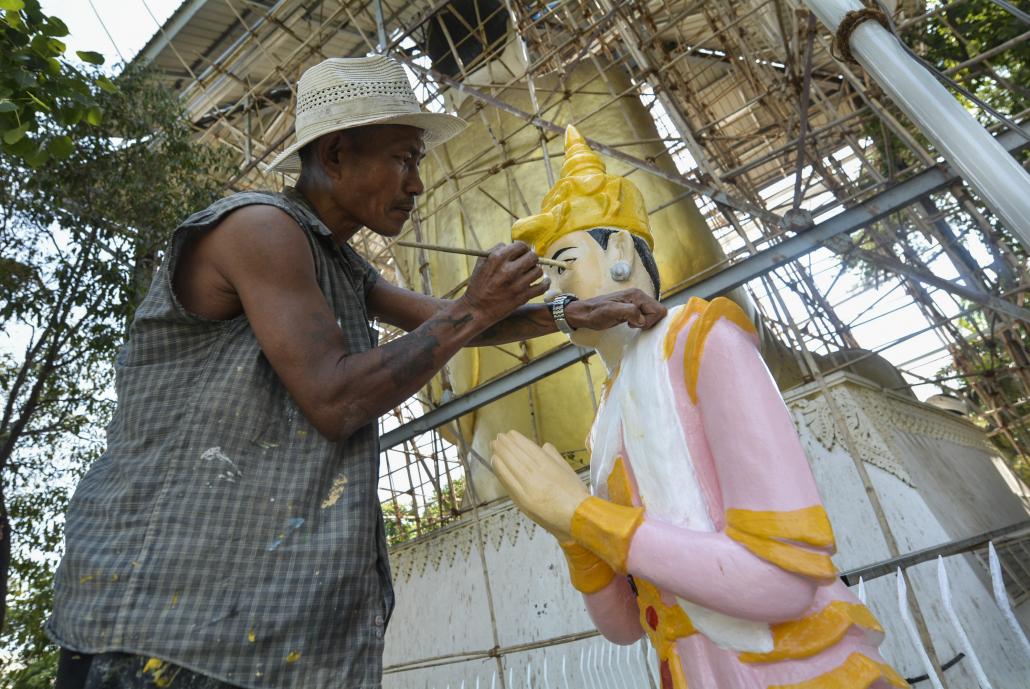 Win Sein, who lives in Yangon’s Pazundaung Township, has changed to using stucco for his creations. He began sculpting when he was 14 and makes a variety of sculptures and statues, including Buddha images and nats.

“I can make the Ten Flowers and I based my work on these arts but I blend it with other art forms to create a new style,” he said. Pointing to a sculpture of an ogre in his workshop, he said its mask was a blend of Ten Flowers techniques and a different method.

“This is a new style of mask in Myanmar,” he told Frontier.

The ogre’s mask was made from paper, string, gems and gold and silver, and it was the only one of its kind in Myanmar, Win Sein said proudly. He made it in 1980.

Although Win Sein practised all 10 traditional art forms in the past, he is most familiar with panbu and pantaut. He changed to using stucco because of a shortage of wood during the past four years.

Each statue depends on the customer’s preference and cost depends on size and how much work is involved. An elaborate statue is more expensive than a simpler one, said Win Sein.

As well as Buddha images, nats and giants, he makes statues of angels, lions and dragons.

Win Sein has been making a statue of an angel ordered by a customer from Ayeyarwady Region. He said the angel was four feet (about 1.2 metres) high and would cost K400,000, or K100,000 a foot. The cost of bigger statues is calculated differently.

One of his most expensive creations is a statue of a nat made for a customer from Rakhine State. It was expensive because it was decorated with gold and gems and was particularly intricate, Win Sein said.

The stucco statues are only for the Myanmar market. They are mainly ordered for religious purposes or by art lovers, he said.

Yangon has only a few artists making statues in stucco though there are many in Mandalay who rely on their craftsmanship to make a living, Win Sein told Frontier.

“There are at least five artists making these [stucco] statues in Yangon; this work is very complicated,” he said, adding that his statues involved mixing panbu and panyan techniques and other styles and included materials such as gems and silver. 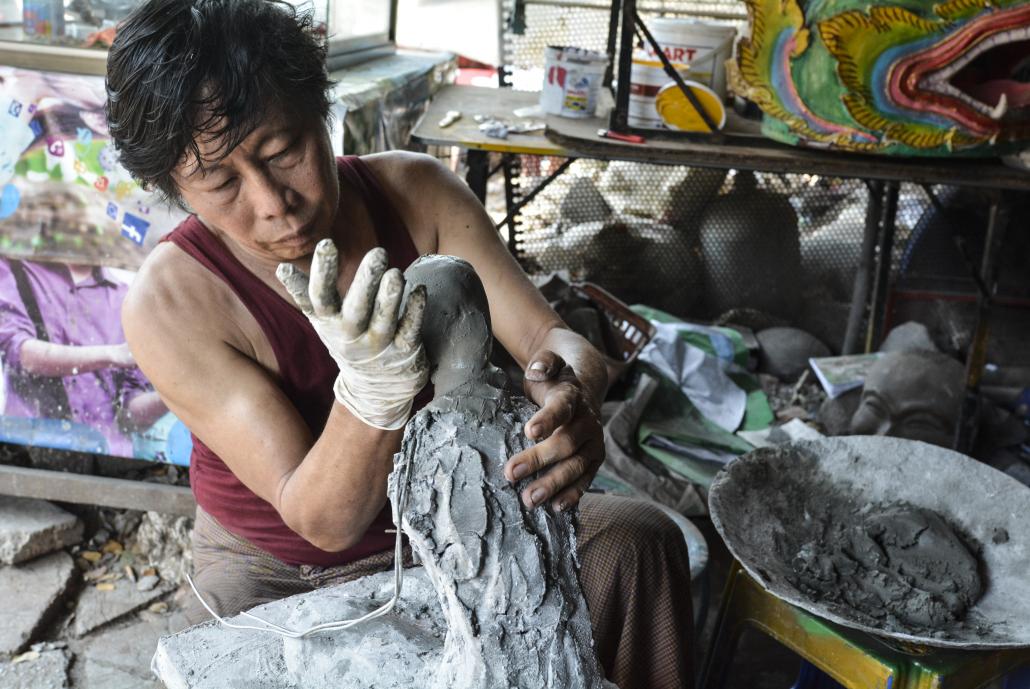 U Win Sein crafts one of his statues. (Teza Hlaing / Frontier)

Other stucco panbu artists in Yangon include U Kyi Sen Lay, 70, whose studio is in North Okkalapa Township. He studied panbu and painting as a student between 1968 and 1971.

“I built the Karaweik [on Kandawgyi Lake], and I make statues, including of monks and nats, using panbu and pantaut,” Kyi Sen Lay told Frontier. “A lot of Myanmar traditional art is struggling to survive because there is not a lot of money in it,” he said.

Another Yangon panbu artist, Ko Thar Kyi, 32, who also lives in North Okkalapa, said there was a shortage of statue makers throughout the country. Thar Kyi has been an artist for five years and teaches the art form to earn extra income.

“We have no export market, so are depending on orders for monasteries and pagodas,” he said. “Other countries are promoting their traditional arts and crafts and I think we should beginning selling our products overseas.”

Win Sein said traditional artists were keen to share their skills and knowledge and he wanted to open a gallery to encourage the preservation and promotion of the Ten Flowers.

“We would like to grow the market and I would like to share my experiences and work with the young generation, but they are not interested,” he said. “I think the Ten Flowers and the artists who have been keeping tradition alive will disappear in the future.” 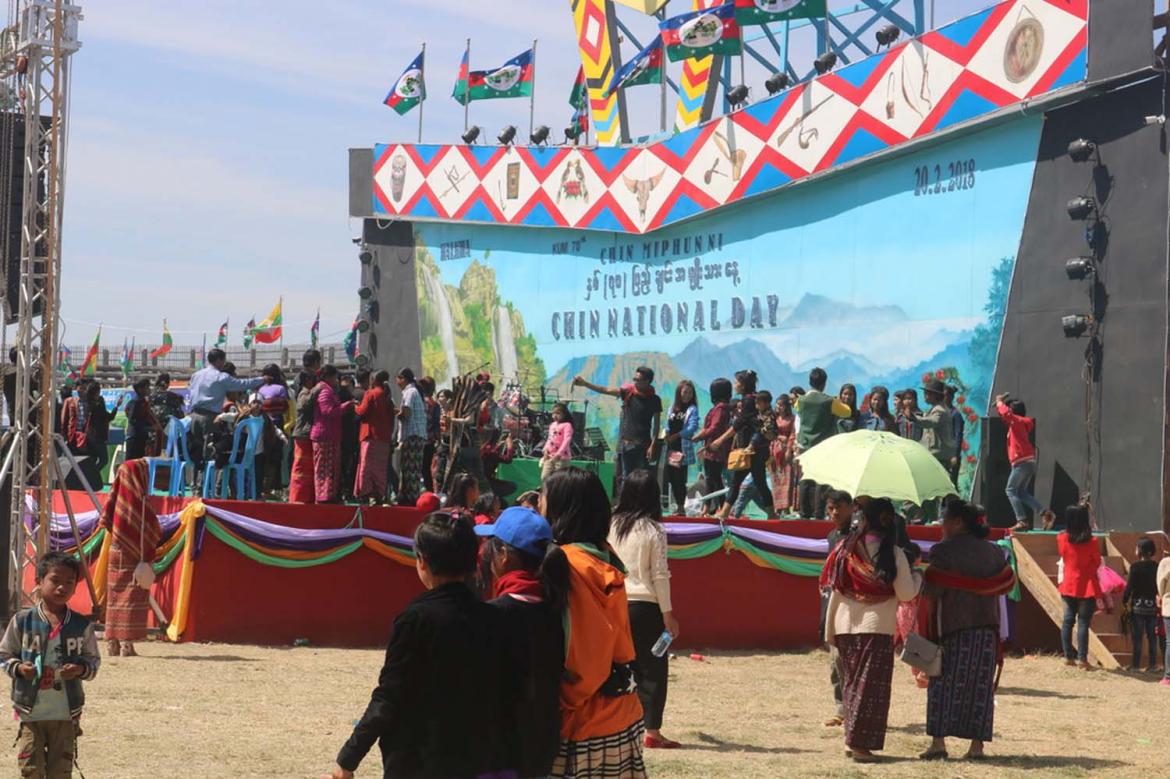