YANGON — A announcement by the European Union that it is considering suspending trade privileges for Myanmar because of alleged Tatmadaw atrocities in Rakhine State has alarmed garment firms, which say hundreds of thousands of jobs are at risk.

The move has also puzzled human rights activists and campaign groups, few of whom have lobbied for broad economic sanctions.

EU trade commissioner Ms Cecilia Malmström told a meeting of European trade ministers in Austria on October 5 that the EU is imminently sending a mission to Myanmar to determine whether to begin a withdrawal process, which would include a six-month review window for Myanmar to demonstrate progress.

“There is a clear possibility that a withdrawal could be the outcome,” she said.

Malmström cited the report of a United Nations Fact-Finding Mission, which outlined the “gravest crimes under international law” in Rakhine, as their motive for reviewing the trade privileges. This is despite the FFM report advising against “general economic sanctions” that could hurt ordinary working people.

Companies claim that blocking Myanmar’s access to the Everything But Arms programme, which allows the world’s least developed countries duty and quota free access to the European market under the EU’s Generalised Scheme of Preferences, would pose an existential threat to Myanmar’s burgeoning garment sector. In 2017, garments comprised 72.2 percent of the €1.56 billion (US$1.8 billion) in exports to Europe, one of the few regions with which Myanmar enjoys a trade surplus.

Earnings from Europe have increased almost tenfold from 2012, the year before Myanmar’s GSP membership was reinstated. Overall, garments are Myanmar’s largest source of foreign exchange after oil and gas.

The Myanmar Garment Manufacturers Association says the sector has about 450,000 employees in more than 600 factories, most of which are on the outskirts of Yangon, with others at Bago, Pathein, Hpa-an and Mandalay. International buyers include Primark, H&M, Inditex, Next, Adidas and Gap.

MGMA chairperson U Soe Myint told Frontier that, if European trade privileges are withdrawn, more than half of all garment workers could lose their jobs. He said the prospect recalls the “experience we had in 2003”, when US trade sanctions were blamed for crippling a nascent garment sector in Myanmar and pushing thousands of destitute female workers into prostitution and human trafficking rings.

A 2017 survey of garment sector workers in Yangon, commissioned by German-Dutch clothes retailer C&A, found that 94 percent were women, with “a clear majority between the ages of 16 and 23”. Though most were Bamar – who had come in large numbers from impoverished villages in the Ayeyarwady Delta – 19 percent were Rakhine. The workers are known to send a big share of their salaries to their families and those from Rakhine provide a lifeline to their home communities in the state, one of the poorest in the country.

EU ambassador to Myanmar Mr Kristian Schmidt briefed European business representatives on the possibility of Myanmar’s suspension from the GSP “if the situation in Rakhine does not improve” at a breakfast talk organised by EuroCham, the European Chamber of Commerce, on September 18.

EuroCham is preparing to lobby the European Commission in Brussels against GSP removal, mainly by stressing the superior labour rights and environmental standards that European buyers and investors bring to Myanmar’s garment sector.

He said that garment production presented the best opportunity for Myanmar to build a solid industrial base, similar to the path taken by China, before rising Chinese wages prompted a shift in manufacturing to Southeast Asia, but with an opportunity to improve on worker welfare and environmental impact.

“If done properly, it can be a vehicle for positive change,” he said. “But it now faces a very serious threat of being stalled.”

A spokesperson for Swedish clothes retailer H&M, which entered Myanmar in 2013 and now sources from 40 factories employing 43,000 people, told Frontier that withdrawing privileges would be a big setback for the sector.

“A withdrawal of the GSP could have significant consequences for the continued development of the sector and the employment opportunities it creates and thereby, have a negative impact on workers and communities,” the spokesperson said.

MGMA chairperson Soe Myint claimed that, despite the size of the industry, his association was powerless to persuade the EU or to lobby the Myanmar government to prioritise addressing the EU’s concerns over human rights in Myanmar. “What could we do? We don’t even understand all of these processes!” he said. 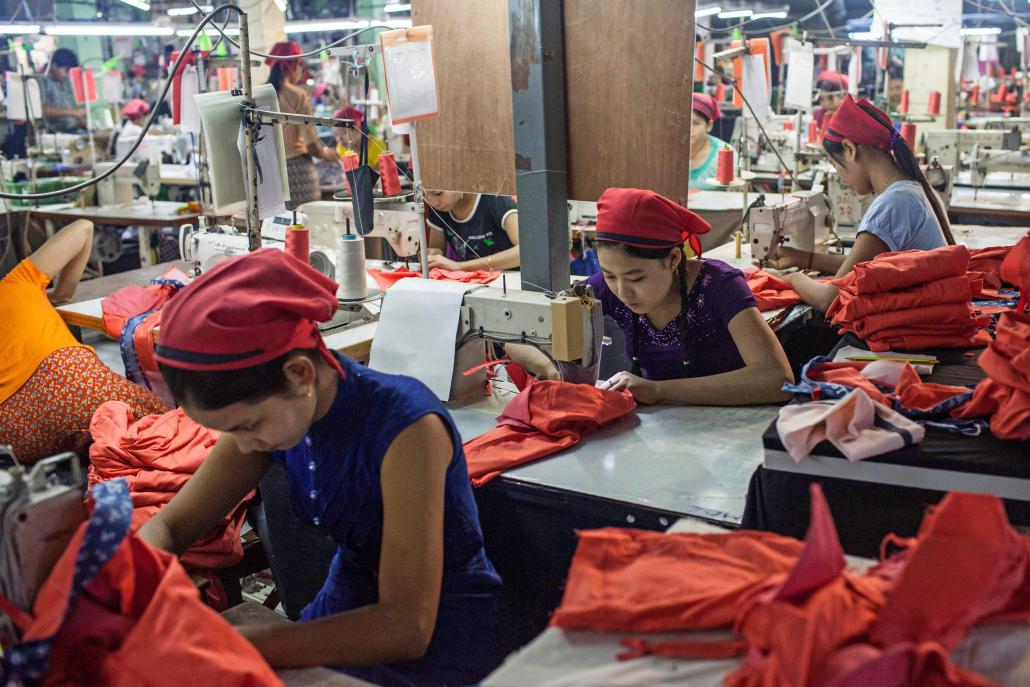 “It is undeniably true that the presence of European businesses has improved standards in Myanmar,” he said, noting particular progress in reducing child labour, which was formerly rife in the industry, and improving fire safety, with most factories now being steel-framed structures of no more than two storeys.

Clere added that, despite complaints from factory bosses and predictions of industry collapse, the minimum daily wage in Myanmar, set at K3,600 when it was introduced in 2015 and increased to K4,800 early this year, “has been a success story”, with the industry still growing amid higher worker incomes.

Moreover, a perennial complaint of investors in the garment sector – the lack of skilled, educated workers – has forced companies to invest more in training, to the benefit of the wider economy.

However, Clere said that while most factories pay the minimum wage – especially those serving European buyers – some smaller operations withhold certain amounts from workers’ basic salaries, which are paid instead as “bonuses” to reward harder work over longer hours. The garment workforce survey commissioned by C&A also found that only 15 percent with access to union membership had joined and that most “rely heavily on overtime” to meet daily living costs.

Schmidt told Frontier that joining the GSP in 2013 “was one of the key successes of our engagement of Myanmar, and was greeted with joy”. However, he said he had warned the Myanmar government last November that “access to the European market is contingent on human rights and fundamental values”.

The 2012 EU regulation that governs the GSP says countries can be removed for “serious and systematic violations of the principles laid down in certain international conventions concerning core human rights and labour rights”. These include the conventions on genocide, torture, racial and gender discrimination, civil and political rights, freedom of association, forced labour, and children’s rights.

The EU Commission need only consult member states before launching the withdrawal process and it is not put to a vote in the European Council. The Commission describes withdrawal as “an option of last recourse when other forms of dialogue and cooperation have not produced the desired improvements”.

The withdrawal process is lengthy, starting with a six-month review period, during which the situation in Myanmar will be monitored for improvements and the government will be given “every opportunity to cooperate”, according to the regulation. If Myanmar should fail the review, the withdrawal of GSP privileges would take another six months, and would apply to “all or of certain products”, leaving open the possibility of an exemption for garments.

However, despite these qualifiers, the possibility of GSP withdrawal would put a cloud over an already darkening environment for foreign investment in Myanmar. Clere said that although growth in output remained healthy, only 18 new garment factories began operations in the first half of 2018, compared to 70 in the first half of 2017.

Lauwerysen said European companies have already “begun to readjust business models and investment plans” to prepare for a possible GSP withdrawal. He said some representatives of major European firms had told him that “if GSP changes, we’re out of here”, and that they might consider opportunities in Africa.

Chinese investment, often seen as a bulwark against declining Western interest in Myanmar, would also be hit, because nearly half of all garment factories are Chinese owned – in one of the few sectors where the government does not place limits on foreign investment – and many of them serve the European market.

However, U Khin Maung Lwin, assistant secretary at the Ministry of Commerce, downplayed the issue with Frontier, saying losing GSP would “moderately impact” exports. He believed withdrawal would require the EU to gain the approval of “all of its members”, a difficult feat. He said there were discussions within the government on how to “negotiate” with the EU, but that they would “approach softly”. 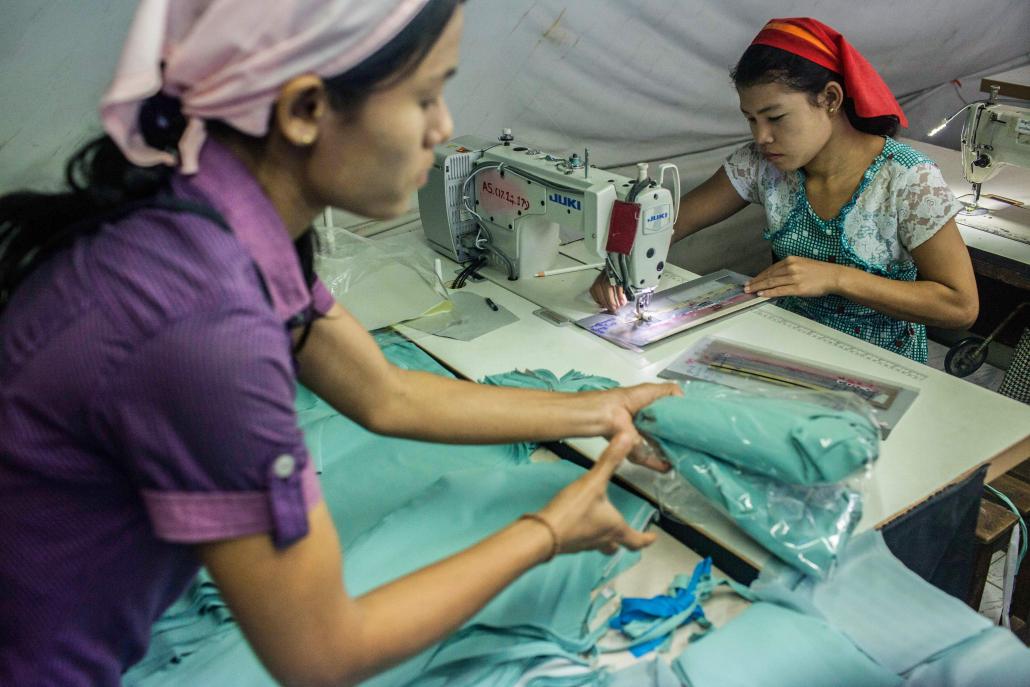 Speaking to Reuters in Brussels about the possibility of withdrawing GSP, an unnamed EU official said they were “concerned about the impact on the population from our potential measures, but we cannot ignore a UN report describing the military campaign as genocide”.

In April, the EU strengthened its arms embargo on Myanmar. In June, it imposed travel bans and asset freezes on seven senior army and police officers accused of abuses against Rohingya Muslims in Rakhine. However, these were largely symbolic; it is not known whether those targeted had any assets in Europe. GSP withdrawal would have a far greater impact, though Clere said only a handful of garment factories were known to have links to the military.

The UN Fact-Finding Mission’s report favoured sanctions targeted at officials responsible for human rights violations in Myanmar – alongside the prosecution of senior military officers for genocide – but opposed broad economic sanctions out of concern that “such sanctions in the past may have contributed to the impoverishment of the Myanmar people generally while having little impact on those most responsible for serious human rights violations”.

The mission’s full report, delivered to the UN Human Rights Council in September, recommended “continuing efforts to reduce the poverty in which most people in Myanmar live, through increased economic engagement and development assistance, provided that the engagement and assistance is carefully targeted”.

“It is ridiculous that the EU has rejected sanctions against military owned companies, rejected banning all training of the military, won’t support a UN arms embargo, and won’t even support referring the situation to the International Criminal Court, but is considering imposing a kind of sanction which will mainly affect ordinary people,” he told Frontier. 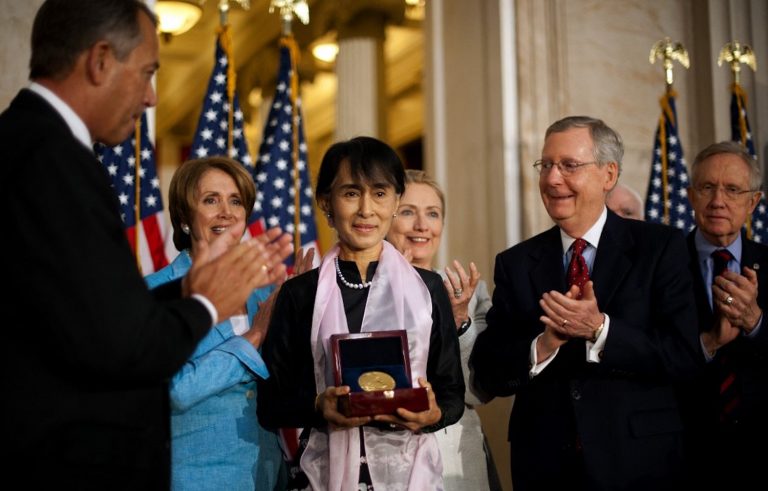