Dragging dissent through the courts

The Tatmadaw appears to be bent on a campaign to silence its critics via courts that are all too happy to process its complaints, whatever the cost to freedom of expression.

At a ceremony in New York on May 28, Reuters reporters Ko Wa Lone and Ko Kyaw Soe Oo received their Pulitzer Prize for international reporting with their colleagues from the Yangon bureau. The event at Colombia University came three weeks after they were released via a presidential pardon from a seven-year jail sentence imposed last September for breaching the Official Secrets Act.

The two journalists had spent more than 500 days in custody after being arrested in Yangon in December 2017 while investigating the massacre of 10 Rohingya men and boys at Inn Din village in northern Rakhine State. Their case prompted international concern over the state of media freedom in Myanmar, but their release has coincided with a surge in arrests for public expressions of opinion. Free speech and press freedom in Myanmar appears to be threatened to a degree not seen since the days of military rule.

On April 12, filmmaker U Min Htin Ko Ko Gyi, who founded the Human Rights Human Dignity international film festival, was arrested on two charges over Facebook posts that criticised the Tatmadaw. He was denied bail and sent to Yangon’s Insein Prison, despite being seriously ill with liver cancer, and hearings are underway at Insein Township Court.

On April 19, a former Tatmadaw captain, U Nay Myo Zin, appeared before Yangon’s Taikkyi Township Court. He is accused of having incited an offence against the state in a speech given at a public rally, in which he called for the constitution to be amended to reduce the Tatmadaw’s role in politics. Nay Myo Zin was denied bail and is also in Insein Prison.

Earlier that month, during the Thingyan New Year festival, Lieutenant-Colonel Than Tun Myint from Yangon Command lodged criminal defamation complaints at Yangon’s Mayangone Township Court against five members of Peacock Generation, a thangyat comedy theatre troupe, for street performances during Thingyan that satirised the Tatmadaw. Two more members of the youth troupe have since been accused of the same offence, and all seven are behind bars in Insein Prison.

On April 12, Lieutenant-Colonel Zaw Min Tun of Yangon Command filed a complaint alleging online defamation against U Ye Ni, the Burmese edition editor of the Irrawaddy, for news coverage of fighting in Rakhine State between the Tatmadaw and the Arakan Army that the Tatmadaw claims was biased against them. Though bailed, Ye Ni’s trial continues.

On May 1, police Special Branch officers filed a complaint against U Aung Min Oo, the editor and executive director of the Development Media Group news agency in the Rakhine capital, Sittwe, accusing him of contact with an “unlawful association”. Aung Min Oo has reportedly gone into hiding.

In all these cases, which span less than two months, the criminal complaints were filed by Tatmadaw or police officers.

Tatmadaw officers have the same right as any citizen to pursue legal action but, with news coverage that it considers defamatory, it should first seek redress through the News Media Law. The law provides for complaints about published or broadcast information to go before the Myanmar Press Council for mediation. If mediation fails to resolve a dispute, an unsatisfied complainant can file a case in court.

However, it seems that Tatmadaw leaders do not have the patience for the dispute resolution mechanism outlined in the News Media Law.

In a statement issued on May 3 to mark International Press Freedom Day, the press council criticised the trend of officials prosecuting journalists under criminal charges rather than first referring cases to it for mediation.

The statement came three days after a meeting in Nay Pyi Taw attended by representatives of the four “pillars” of democracy – the legislature, government, judiciary and media – agreed to strengthen cooperation in a bid to solve challenges in reporting the news.

The Tatmadaw has defended its decisions to take action under sections of the Penal Code and the Telecommunications and Unlawful Associations laws, with Brigadier-General Zaw Min Tun of the Tatmadaw’s True News information team telling a news conference on May 1 that penalties imposed on journalists under the News Media Law were inadequate.

“If they cursed you, your father, your mother and all generations of your family, and would compensate you only K300,000, would that be OK with you?” he said. The maximum penalty that can be imposed under the News Media Law is a fine of between K300,000 and K1 million.

When initiating legal action against its critics, the Tatmadaw clearly wants them to be detained as soon as possible, without a chance of bail. This is evident in the choice of legal provisions, such as in Penal Code section 505, that are “non-bailable”, meaning a judge must rule on whether to grant bail – something that in practice is usually denied, even if the defendant is unlikely to abscond, commit further offences or interfere with witnesses.

This raises the question of why courts are agreeing to entertain charges under these laws and not others – and of why they are proceeding with these cases in the first place.

Myanmar’s judicial system does not formally allow Tatmadaw officers to choose the laws under which charges are brought. That decision ostensibly rests with law officers, as state prosecutors are called, and judges must decide whether or not to accept charges after preliminary hearings. However, law officers and judges continue to be as overwhelmed by fear of Tatmadaw officers as they were under military rule, and so do their bidding.

The flurry of cases initiated by the Tatmadaw against journalists, artists and activists, which have been processed obediently by the courts, has cast a pall over media freedom and freedom of expression. The public can only listen with scepticism when Tatmadaw leaders talk, as they sometimes do, about participating in building a democratic Myanmar.

The Tatmadaw already has a poor international image; its crackdown on media freedom and freedom of expression will surely make it worse. 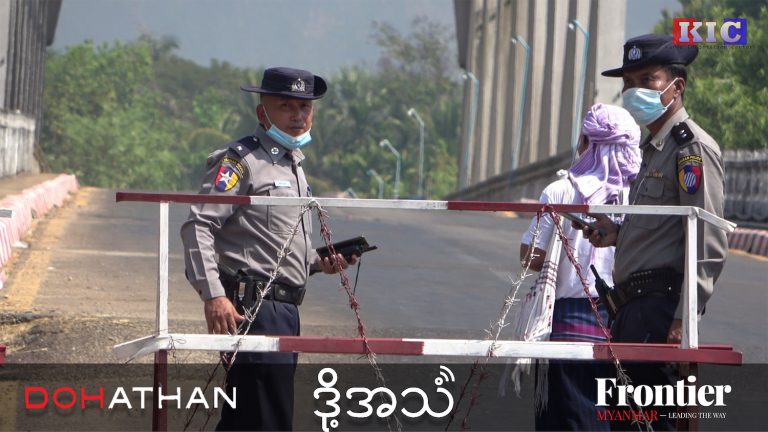 Freedom of expression is a fundamental human right, but has completely eroded in Myanmar since last year’s coup, with the junta jailing reporters, increasing surveillance, and amending laws to grant themselves greater powers. On major roads they have also increased the number of checkpoints, which they are using to interrogate everyday citizens and monitor their online activity.
BY Frontier