Much to their dismay, activists continue to be harassed, intimidated and spied on despite the transfer of power to the National League for Democracy government.

PROMINENT activist Ko Tin Htut Paing, who was sentenced to 15 years’ imprisonment in 2009 and released under a presidential amnesty in 2012, might have had reason to believe there would be greater freedom under the National League for Democracy government.

On the evening of June 15 this year, he received a phone call from a man claiming to work for Yangon-based media group Mizzima. The man wanted to know about some workers on trial whom Tin Htut Paing was helping.

“Because I had some doubts about who had called me, I contacted some acquaintances from Mizzima and asked about him. They told me that there was no person by that name at their organisation,” said Tin Htut Paing, leader of the civil society group Generation Youth. He believes the call came from someone in the government who was trying to get information about his movements or those of the workers.

Despite the change of power in March to a civilian-led government, activists say they are still being closely monitored by the authorities.

Tin Htut Paing says he has been under surveillance since 2007 because of his role that year in the monk-led protest movement known as the Saffron Revolution. Despite the change of government this year, he believes he is still on a watchlist.

After 50 years of military rule, the Tatmadaw slowly began to loosen its grip on power after the quasi-civilian government led by former general U Thein Sein took office in 2011. Greater freedoms led to an increase in protests under the Thein Sein administration, which was replaced in March by the National League for Democracy government. 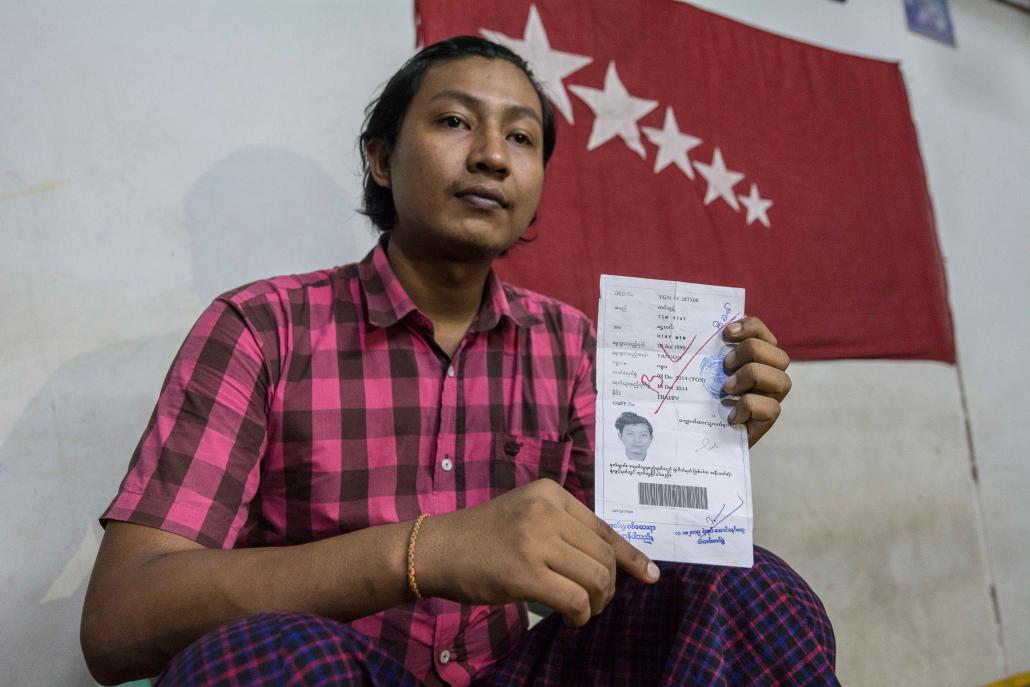 Activist Ko Tin Htut Paing shows his passport application, which was rejected because he is still on a government blacklist. (Teza Hlaing / Frontier)

The Assistance Association for Political Prisoners (Burma), an advocacy group, says one activist was arrested each day during the first eight months of 2015, the last full year of Thein Sein’s tenure.

U Aye Thein was among those detained. He was charged six times and jailed twice for participating in demonstrations during the term of the previous government.

One of the protests followed community disagreement over the authorities’ plans for Mandalay’s Mingalar Market, after it was destroyed by fire in March. The protesters were closely watched by police and intelligence agents, said Aye Thein, adding it seemed that intimidation was being used to try and suppress activism.

“Although demonstrators are rarely charged under the new government, they seem to be intimated into not being involved in protests because they [intelligence agents] come and take photos for recording purposes,” Aye Thein told Frontier.

Soon after the NLD government was installed, plain-clothed officers raided Aye Thein’s office in Mandalay and took photos, he said.

“They took photos of whatever they liked without asking for permission,” he said.

“We have found that many people who were activists stopped this sort of work when the new, popular government took office,” he told Frontier, referring to the NLD, which won last November’s election in a landslide.

Although there may be fewer people joining protests, there appears to be little change in the attitude of officials towards demonstrations under the new government. In May, less than two months after the transfer of power, plywood factory workers and their supporters marching from Sagaing Region to Nay Pyi Taw over a labour dispute were dispersed on the outskirts of the capital and about 70 people arrested. Most were released about a week later but 15 remain in detention and are on trial.

“Family members were not allowed to meet [protesters],” said Tin Htut Paing. The government’s way of dealing with protests has not changed, he said. “There are some changes under the new government, but if protests relating to the whole country take place, the government will clamp down or arrest those who take part,” he said.

Tin Htut Paing applied several times for a passport when Thein Sein’s government was in power but was unsuccessful. His latest passport application was lodged in June but it was rejected, too. Passports are issued by the Ministry of Home Affairs, one of the three ministries – along with Defence and Border Affairs – that under the terms of the 2008 Constitution are headed by military officers appointed by the Tatmadaw.

U Moe Thu, who often takes part in protests, is disappointed that the NLD government is not living up to promises about the right to demonstrate that had raised the hopes of activists. Noting that the government included some former political prisoners, he said it would probably have to deal with more protests in future.

“This new government seems to prefer words to action,” he said.