The ubiquitous little repair shops that were a response to the poverty created by economic isolation are under pressure from municipal by-laws, modernisation and rising incomes.

IN MANY a side street in Yangon – and throughout the country – you will find them: the operators of small shops or stalls that make or repair anything from watches and umbrellas to typewriters and washing machines.

If it needs repairing, you can be sure that these people can fix it.

In the bustling, narrow lanes of downtown Yangon, there are dozens of businesses that fix, recycle and resell appliances and other products. 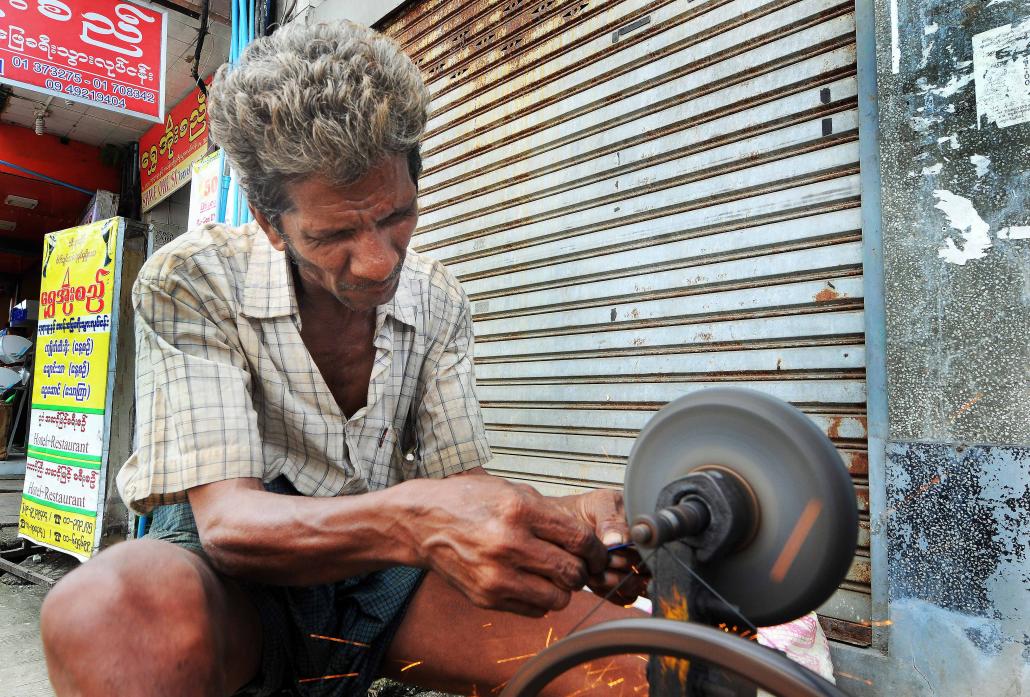 Streetside repairmen have been a constant presence in Yangon for decades. (Steve Tickner / Frontier)

In an age where people around the world are using tablets and smartphones to communicate, on 32nd Street an elderly, bespectacled man focuses intently as he repairs a rusting typewriter.

The repair shops are a low-key but thriving sector that has formed an important part of people’s lives in Myanmar for decades. As Yangon and the nation develops, many of these businesses are still surviving, but only just.

Some are under threat from stricter rules against operating stalls on footpaths and others from a loss of space as downtown Yangon roads have been widened to accommodate the influx of cars and trucks since 2011. For many, the challenge is that their customers are part of the booming middle class, who can now afford to buy these items new. 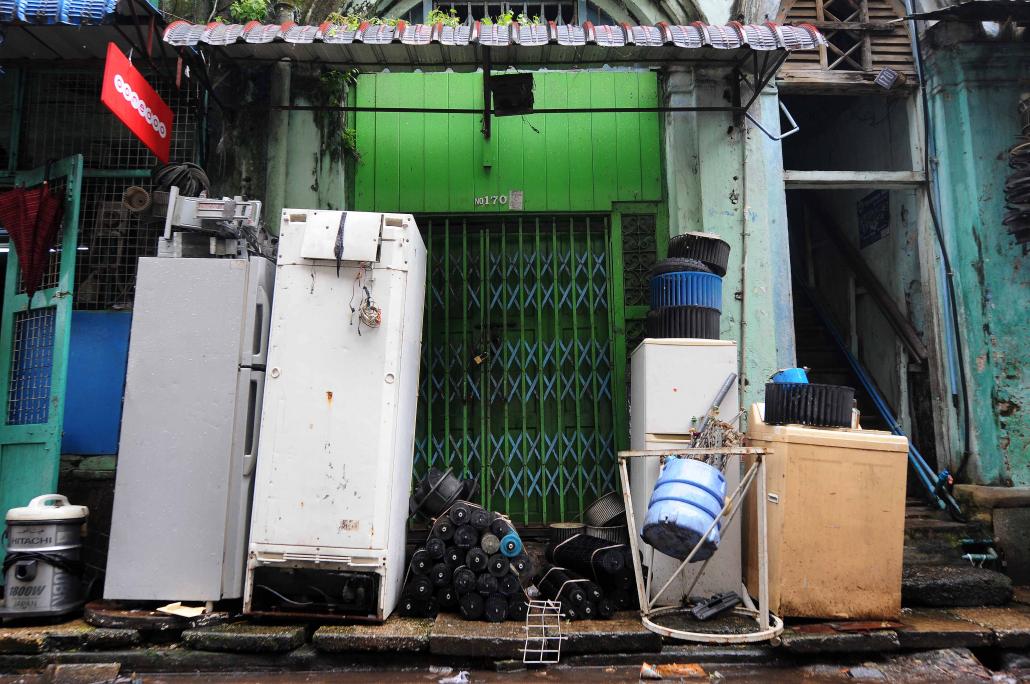 A 2013 study by American firm Boston Consulting Group predicted that Myanmar’s middle and “affluent” class would double in size by 2020. It defined middle class as anyone with a monthly income of more than US$120 (about K145,500).

The study estimated that about 5.3 million people were middle class or affluent and predicted their number would rise to 10.3 million by 2020.

On 28th Street in Pabedan Township, a predominately Hindu area, Ko Soe Hlaing occupies a small space squeezed between two buildings where he is surrounded by radios and spare parts. 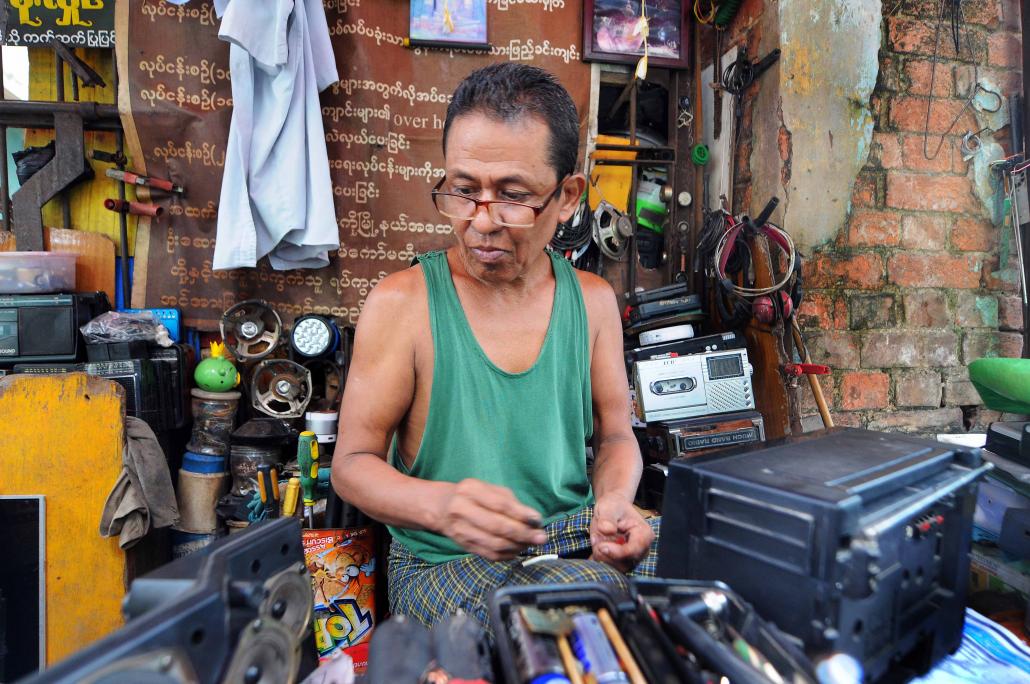 A rising middle class has meant some of the repairmen have lost customers, but most say they are still busy. (Steve Tickner / Frontier)

Soe Hlaing has been repairing and re-selling second-hand radios for 26 years.

When the country was under military rule and news was strictly censored — long before mobile phones conquered the masses in the country — short-wave radio was the only source of reliable information.

Many people relied on foreign broadcasters, such as the BBC, Voice of America and Democratic Voice of Burma, to learn what was happening in their country and in the rest of the world. It was common under junta rule to see citizens, usually older men, enjoying an early evening stroll with a short-wave radio pressed to their ear. 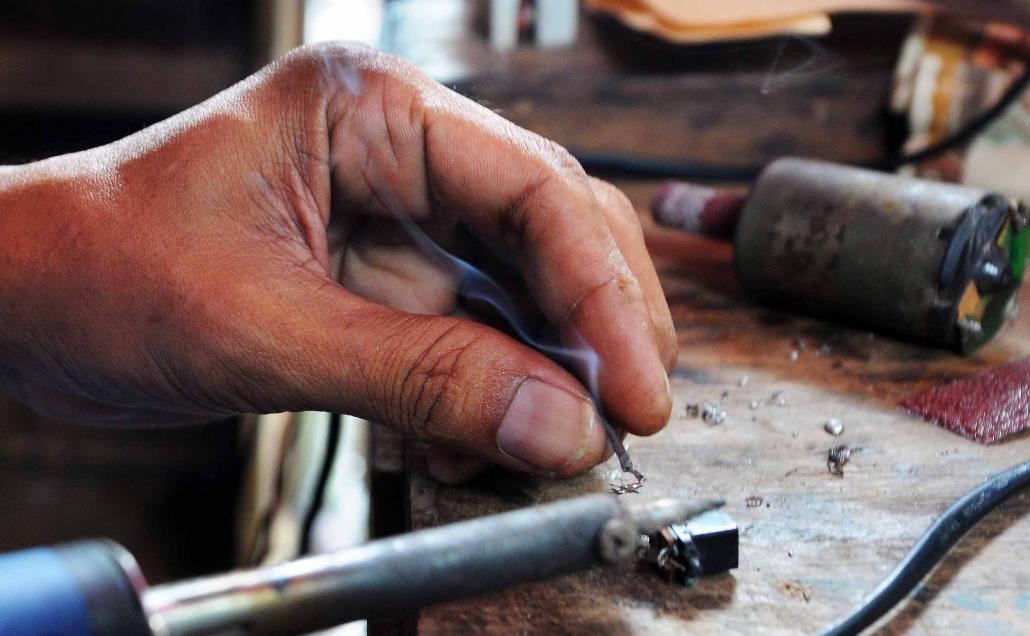 Soe Hlaing laughed when asked about business in 1988, when a national uprising came close to toppling the government before being brutally crushed after a military coup in September.

“I remember that vividly. Suddenly, everyone wanted a radio. It was a vital source of getting information,” he said.

Soe Hlaing said business was still good, but had declined in recent years because of competition from other sources of news and information, such as the internet. 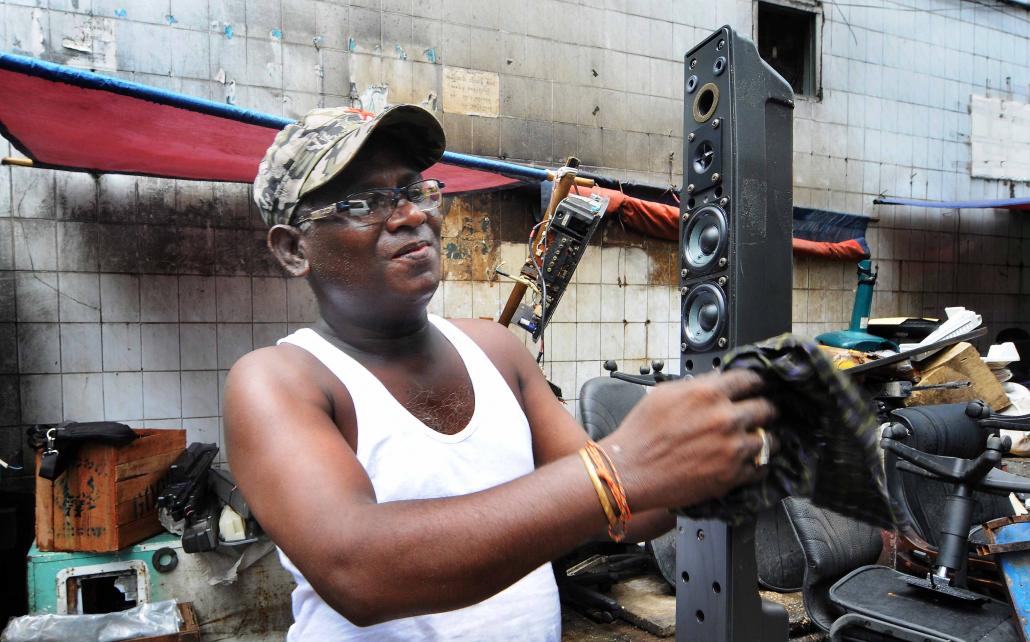 Small businesses like Soe Hlaing’s grew partly out of Myanmar’s deep isolation under socialist autarky during military rule, when the country became one of the poorest in Southeast Asia and was given least developed nation status by the United Nations in 1987. Although incomes have risen since reforms began in 2011, many people still rely on the repair shops because of economic necessity.

A little further down 28th Street is the simple white goods shop of U Myint Oo, 46, its contents spilling out on to the footpath. 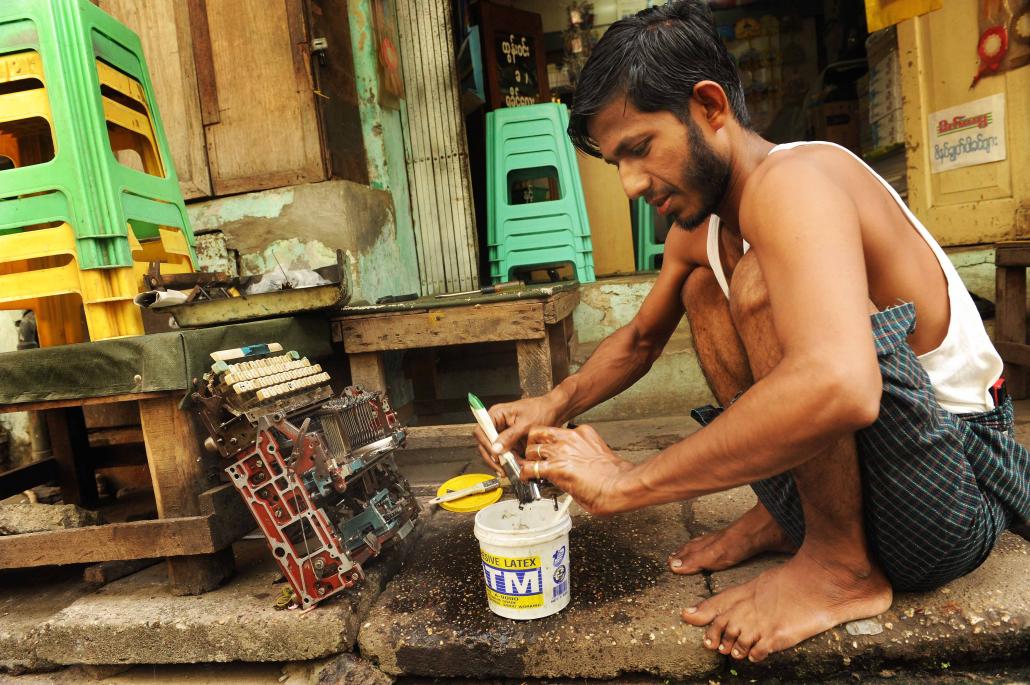 He buys and sells products such as refrigerators, microwaves, washing machines — almost any item that can be dismantled and repaired.

“Some of my goods come from auctions, often embassies and other foreign organisations,” Myint Oo told Frontier at his stall. “Many of my customers want to renew their items, and so I buy them at their sales.” 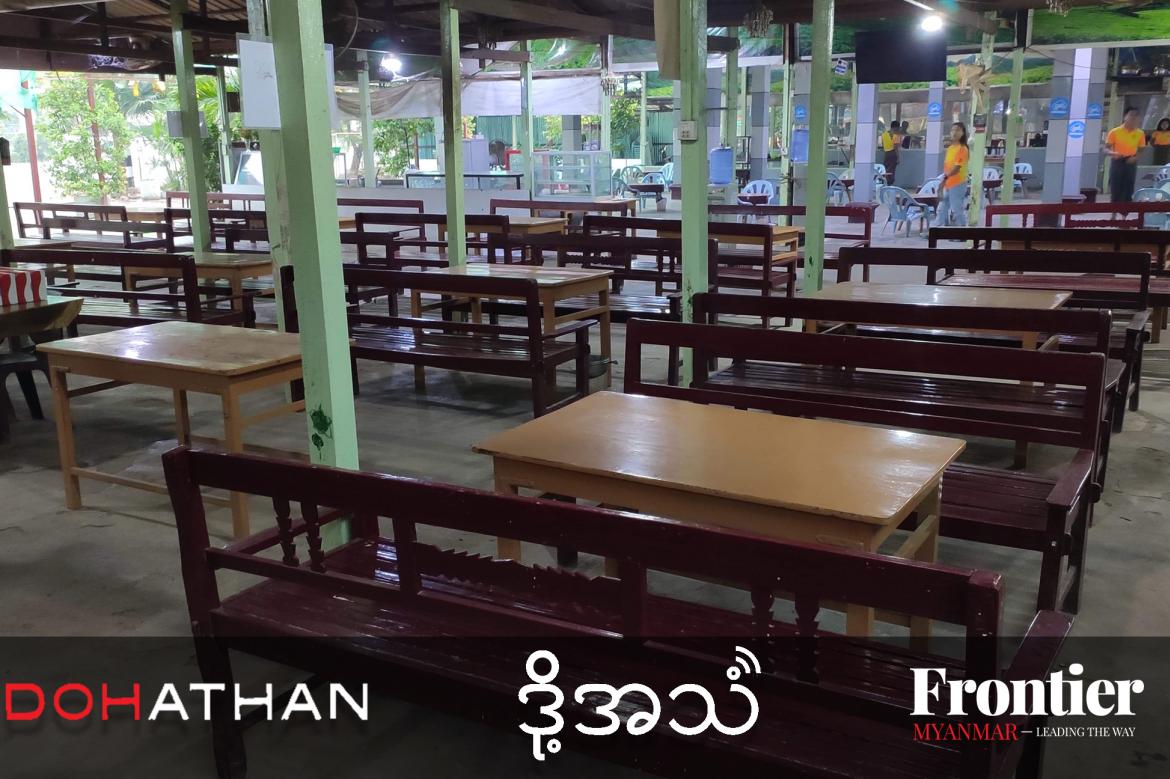 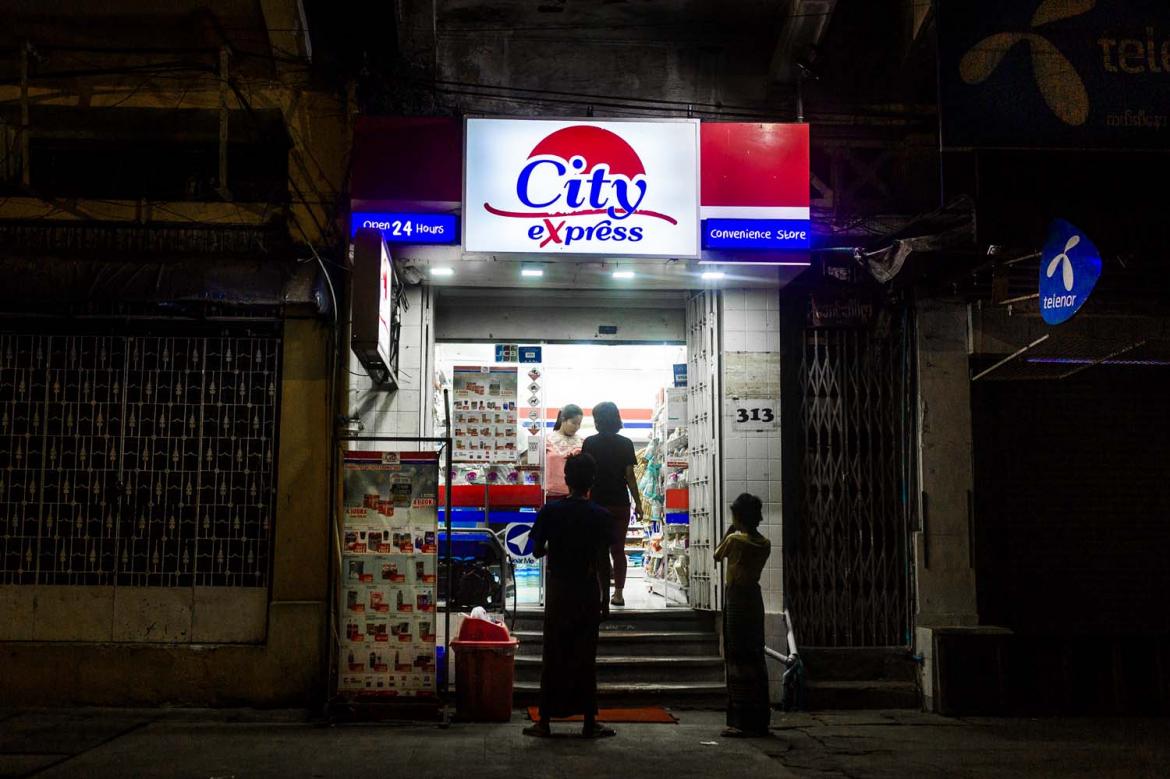