Yangon’s municipal authority is giving democracy a try. The vote could bring local government much closer to the people, but some worry it’s being rushed.

Commuters travelling on Yangon’s congested roads will have spotted some new billboards, each bearing a face, name and a slogan promising change. The same faces and pledges can also be seen on vinyl posters affixed to cars or on pamphlets handed out by volunteers.

On March 31, there’s an election in Myanmar’s largest city and many of the candidates appear to be taking it seriously, with expensive advertisements in prime locations and teams of volunteers deployed to canvass votes since campaigning began on February 28.

For Yangon, this is new.

Although Myanmar held a credible general election in 2015 that attracted nearly a 70 percent turnout, and has since had two rounds of by-elections, including for seats in Yangon, this is the first local election to have the substance and flavour of a genuine democratic contest.

For the first time, all adult citizens who can prove residence for more than a year are eligible to vote for executive members of the Yangon City Development Committee, Yangon’s municipal authority, as well as members of municipal committees for the 33 townships under YCDC administration.

The last YCDC election was in December 2014. Though this was the first municipal election in the city since 1958, scant attention was paid to the 2014 ballot by the media, civil society and the wider public. This was not only because of the competing hype around the 2015 general election.

Voting in 2014 was restricted to one member of each household. This was widely interpreted, though not stated, as meaning “heads of households”, which privileged older males. In the event, 106,089 people voted, a turnout of 25.8 percent; or to put it another way, only 2 percent of Yangon’s total population of about 5.2 million.

A similar voting system has been used for municipal elections in Mandalay and other towns since a 2013 notification from President U Thein Sein obliged state and region governments to enact municipal reforms. These elections also went largely unnoticed.

Beyond the limited franchise, banning political parties and their symbols from the local government contests did not help to build public enthusiasm. The National League for Democracy, Union Solidarity and Development Party and ethnic parties were denied a stage for playing out their rivalries, as well as a chance to widen their bases by engaging voters on issues of local concern.

This month in Yangon, however, residents aged above 18 have the option of re-committing their support for the NLD or the USDP, switching sides, or voting for an independent candidate to have a role in governing the city.

This changed scenario is thanks to a YCDC law enacted in the Yangon Region parliament last year. The upcoming election’s most transformative feature, universal suffrage, was an objective prized by Yangon Region Chief Minister U Phyo Min Thein. The chief minister, once tipped as a possible successor to Daw Aung San Suu Kyi, has weathered a series of scandals during his time in office, involving dubious procurement deals and a readiness to sue journalists for defamation, but a more accountable YCDC might end up being his defining legacy. 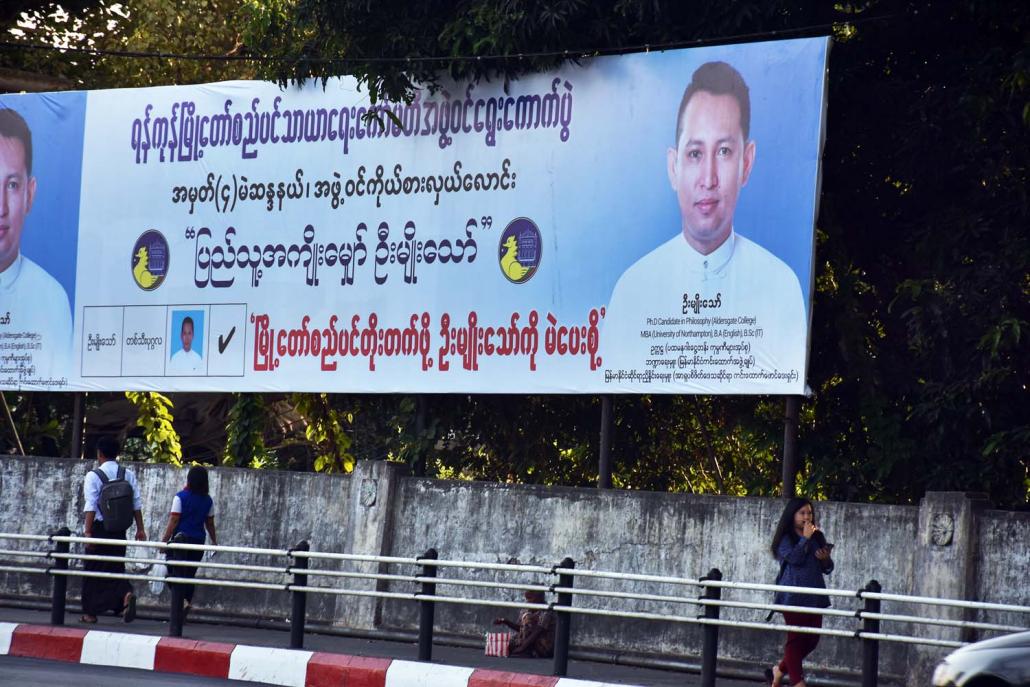 Many of the candidates appear to be taking the election seriously, with expensive advertisements in prime locations. (Steve Tickner | Frontier)

This could have profound consequences. Municipal bodies such as the YCDC and its Mandalay equivalent, the MCDC, are the most devolved governing bodies in Myanmar. This is rooted in their financial independence: the YCDC raises its own budget through tax, services fees, business licenses and property rentals.

In Yangon, the YCDC is supreme, undertaking city planning, collecting waste, lighting the streets, maintaining the water supply, regulating trade and business and managing parks, among other vital services. For many in the city, the YCDC is their primary encounter with government, and this encounter is not often a happy one. The municipal body is routinely disparaged for its perceived incompetence and alleged corruption among its officials.

The next decade will likely see increasing migration to Yangon from the countryside and the possible onset of giant infrastructure projects. With the city’s infrastructure and its housing stock already straining from the economic changes of recent years, sound urban governance will be crucial to improving the lives of the city’s residents – as will giving these residents a bigger say via the ballot box.

Yet, some worry that a rushed timeframe and limited public awareness could produce an embarrassing flop, either through mismanagement or a pitiful turnout. This could discourage city authorities and state and region governments elsewhere in Myanmar from following Yangon’s example.

The Union Election Commission – the one institution that has experience in holding elections with mass franchise – is absent from the process. The ad hoc election commission created by the YCDC was only formed in January.

The YCDC election commission was unable to access the UEC’s voter roll and had to create a list from scratch of the city’s estimated 3.4 million eligible voters, for which it relied on handwritten registers kept by local branches of the General Administration Department. This is the same source for the UEC’s list, which in 2015 drew intense public criticism over alleged inaccuracies, including listing the names of voters known to have died.

In the absence of opinion polls, public knowledge about the election is assumed to be low, but this may change if candidates spend handsomely on campaigns, as some have already shown signs of doing. Voter education efforts, including Facebook videos and scrolling electronic posters at bus stops, are also being supported by the European Union-funded STEP Democracy programme.

International IDEA, an organisation headquartered in Sweden that jointly implements the STEP programme, has three staff working with the YCDC election commission. “The elections are indeed being conducted under very short timeframes which is putting some undue pressure on the commission,” IDEA programme manager Ms Shana Kaiser told Frontier.

However, she said commission members had been working diligently. “Our team of embedded experts has continually noticed the commission’s professionalism and dedication to these elections,” Kaiser said. “We are also seeing some exemplary practices including the open way in which the YCDC is engaging with civil society, examples we hope will be replicated in other elections.”

However, some aspects of the election are likely to dampen enthusiasm among voters. One is that the chairperson of the YCDC, the city’s mayor, is a minister in the Yangon Region cabinet and is therefore appointed by the Union government rather than popularly elected. The newly created position of deputy mayor will, by contrast, be chosen from among the six elected members of the executive committee, although it’s unclear how much authority she or he would wield. Overall, five of the 11 seats on the committee will still be appointed from above.

Moreover, the winners on March 31 will serve for only two years before having to seek re-election, because the term of the committee is synchronised with that of the regional government, which expires in March 2021. This lowers the stakes in a contest that could either be a turning point in local democracy, or mark the moment it fizzles out.

Correction: This article previously stated that the last Yangon municipal election prior to 2014 was held in 1949. It was in 1958.