The Myanmar and Japanese governments are working together to deliver clean, drinkable water to millions of Yangon residents and end groundwater use, but the city’s poorest households may miss out on the benefits.

A mess of stagnant water and rubbish sits beneath the homes, which residents avoid by walking along narrow bridges formed from a few pieces of bamboo. The wall of a factory in Industrial Zone 4 runs alongside the houses. Thin electricity wires are strung up along bamboo poles above the homes, providing just enough power for lighting at nighttime.

The community is home to about 60 migrant households who have come to Yangon over the years to seek better opportunities. They make up just a fraction of the 200,000 people – often referred to as “squatters” – that the General Administration Department estimates are living in informal settlements in Hlaing Tharyar. They represent well over a quarter of the township’s population, which stood at about 688,000 during the 2014 census.

While the residents of Watmasut Wun Htauk Street have found jobs in nearby factories or downtown Yangon, living conditions are difficult. The homes are small and cramped, and there are almost no public services – including water.

The families share five hand-powered pumps that draw up water from hundreds of feet below the ground. Although cleaner than the sludge beneath their homes, the water is heavily saline and is not suitable for drinking or cooking. Residents showed Frontier rusting and stains on their water taps and buckets.

“We only use it for bathing and washing clothes,” said resident U Kyaw Aung, who migrated from Ayeyarwady Region about 10 years ago. “We can’t even use it for washing dishes. Many of the children – including my own – have skin problems, which I assume are from the water.”

Instead, Kyaw Aung has to buy drinking and cooking water for his six-person household from hand-pulled water carts that roam the wards, shelling out about K3,000 every five days. 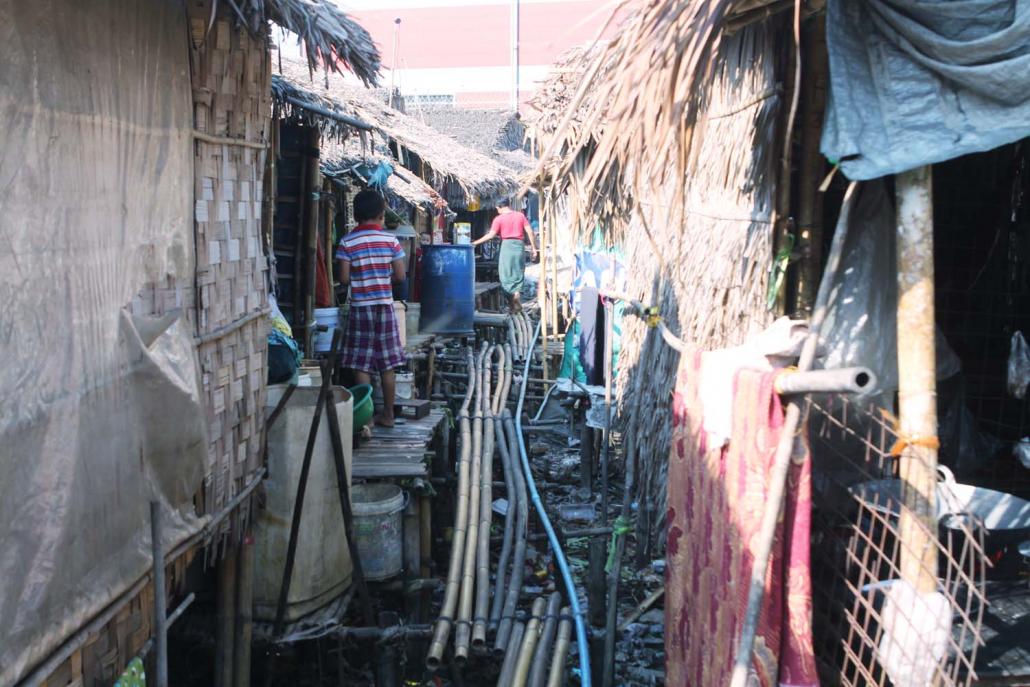 Informal settlements are unlikely to benefit from a planned upgrade of water distribution systems in Hlaing Tharyar. (Supplied)

Reliance on groundwater is not unusual in Yangon. Decades of underinvestment mean piped, treated water from reservoirs reaches less than two-thirds of the population, mostly those in inner townships. Newer settlements on the city’s fringes, like Hlaing Tharyar and the four Dagon Myothit townships, instead get water from private wells, which are largely unregulated and often illegal.

The growing use of private wells prompted researchers to warn at a World Water Day event in Nay Pyi Taw on March 2019 that “overexploitation of groundwater is real”, and that it was causing groundwater level depletion, land subsidence, saltwater intrusion and a general deterioration in the quality of groundwater. Areas of Hlaing Tharyar beside the Hlaing and Pan Hlaing rivers were already experiencing high levels of salinity in the ground water, the researchers said.

Change is coming thanks to a partnership between the city’s municipal authority, the Yangon City Development Committee, and the Japan International Cooperation Agency, which since the transition to a semi-civilian government in 2011 have been cooperating to upgrade Yangon’s urban infrastructure, including water.

One of their joint projects is the multi-phase Greater Yangon Water Supply Improvement Project. The second phase, being implemented with a 25 billion yen (US$226 million) loan from JICA, will see water from the Kokkowa River pumped eastward to Hlaing Tharyar and six townships in downtown Yangon. In addition to the main distribution lines, a network of small pipelines will be laid across Hlaing Tharyar to enable distribution to households and businesses.

Project manager U Htin Lin Kha from YCDC said the Kokkowa project was unique in Myanmar. It will use treated river water, rather than water stored in dams or reservoirs, and have a ring distribution system – whereby the main pipelines are interconnected, enabling water to be supplied to any point from two directions – rather than a dead-end system, which can suffer from stagnation and pressure problems.

As the new network gets closer to the household level it will feature district metered areas – discrete networks that can easily be monitored for pressure and flow, which will help combat water leakage and overcharging. The design of the network means that if there is leakage or a breakdown, water distribution can be stopped in that particular area and supply will continue to other areas as normal.

Htin Lin Kha said consultants had already been selected for the project and they were in the process of drawing up a detailed design. Three packages have been tendered, for the construction of a water treatment plant to purify the river water, the building of distribution pipelines, and the pipeline river crossing. 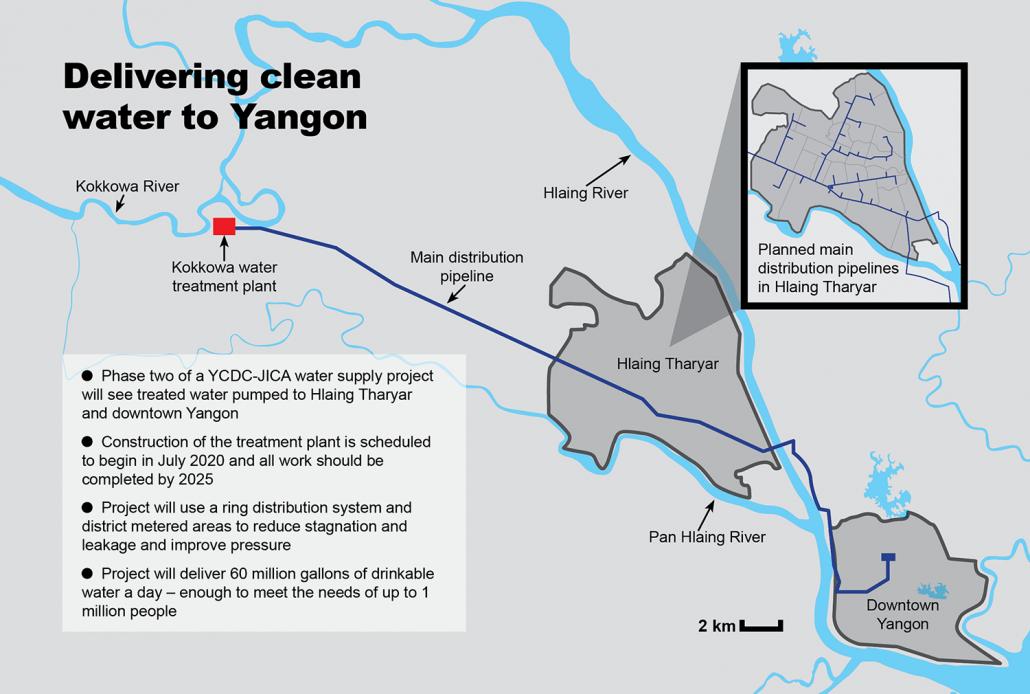 Construction work on the water treatment plant is expected to start in July 2020. Once complete in 2025, it will be capable of treating and pumping 60 million gallons of drinkable water a day through the new pipes – enough for more than a million people, Htin Lin Kha said. “A person uses about 50 gallons a day so the plant will be able to provide a lot for residents in these two zones,” he said.

This is welcome news for the residents of Hlaing Tharyar – at least most of them. What exactly it means for those in informal settlements, like Kyaw Aung and his neighbours, is less clear, but comments from officials suggest they may well miss out.

Htin Lin Kha said that those “who can provide required information and documents” – such as evidence of land ownership – will receive piped water to their door, “just like electricity”.

“The houses have to be solid enough because the water pipeline … will be fixed to each household. Floating houses like slums might not qualify for a connection,” he said.

He acknowledged that the quality of water from most wells in Hlaing Tharyar was a problem due to saline intrusion. “It is more that the population is growing rather than the underground water is running out. The more we use it, the more likely it is there will be salt water intrusion,” he said.

Both YCDC and the National Water Resources Committee’s advisory team have set a target for reducing underground water usage in Yangon by 2025. But cutting 200,000 people off from the new piped supply from Kokkowa will put a major dent in achieving that goal – not to mention the 200,000 additional informal residents in Yangon who are unlikely to benefit from new water infrastructure on the city’s northern and eastern fringes.

Others argue that ending reliance on groundwater supplies is about more than preserving the environment. 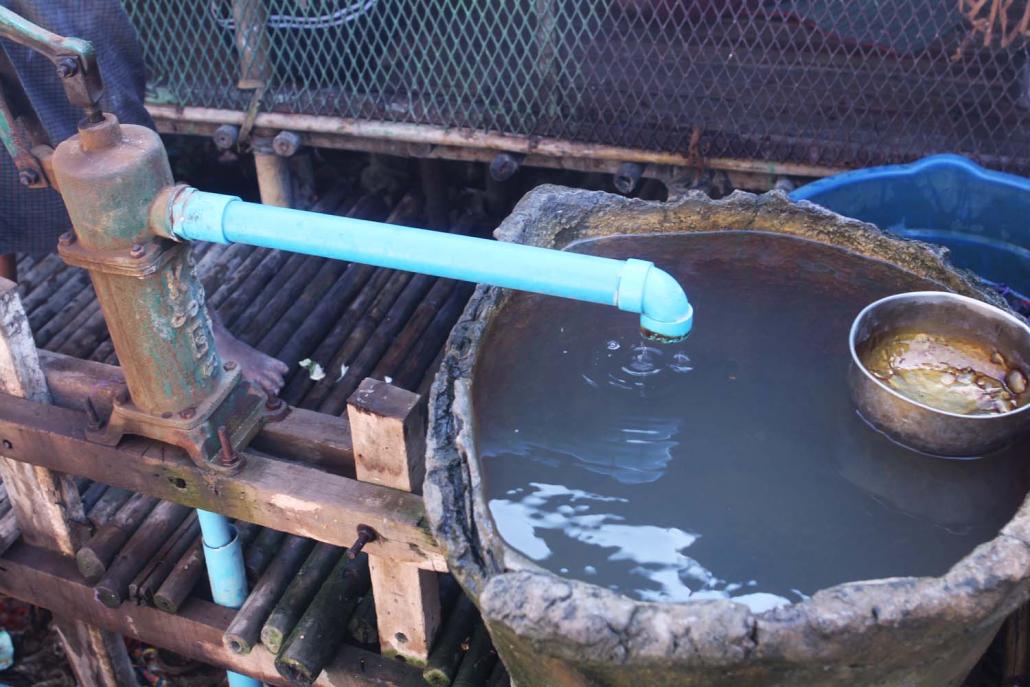 The 60 households in the informal settlement on Watmasut Wun Htauk Street in Hlaing Tharyar rely on five groundwater wells, but saltwater intrusion means the water is not safe for drinking or cooking. (Supplied)

In 2010, the United Nations General Assembly recognised water and sanitation as a human right, while Sustainable Development Goal 6 targets providing access to safe and affordable drinking water for all by 2030.

Mr Shihab Uddin Ahamad, the country director of WaterAid Myanmar, said the government had a responsibility to provide access to clean water to all, regardless of their housing status.

“The question is, can we wait until these households receive approval for ownership of land before giving them water supply or sanitation facilities? We can’t. No matter the place a person lives, the state has a responsibility to ensure there is at least proper drinking water,” he said. “I think the government could come up with an alternative solution to provide proper water supply.”

Until that happens, though, the residents of Watmasut Wun Htauk Street – and scores of other informal settlements across the city – will have no choice but to keep paying thousands of kyat a week to buy clean water for drinking, cooking and washing. 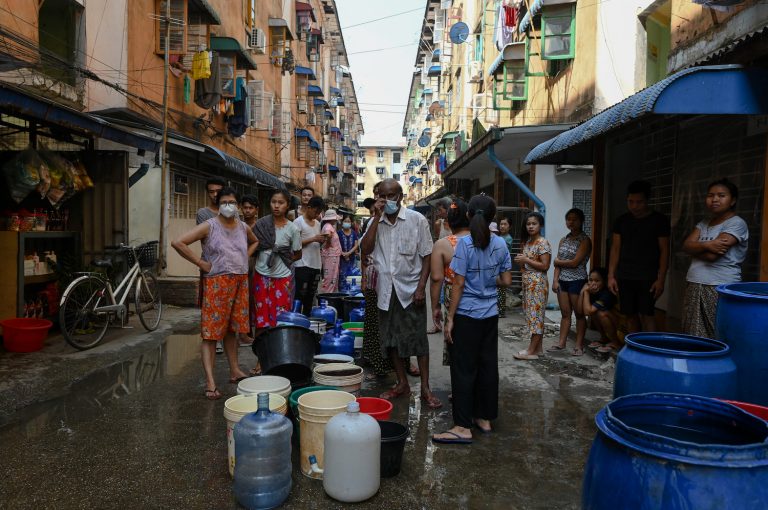 As the economy continues to struggle under the junta's mismanagement, people in Myanmar are now contending with daily power outages and water shortages.
BY AFP