YANGON — The Rakhine ethnic affairs minister in the Yangon Region government hosted an event with American anti-Rohingya activist Mr Rick Heizman at Yangon University on Wednesday, in which Heizman spoke of the “free access” the government and military had granted him in northern Rakhine State.

The event at the university’s Hlaing Campus, “Hidden Truths of Western Frontier in Rakhine State”, included lectures and a screening of a film recently made by Heizman, “Arakan: Ancient Buddhist Kingdom Endangered by Jihad”. The event follows an apparent pattern of endorsement of Heizman’s views and activities by parts of the Myanmar government.

A Twitter spokesperson told Frontier that the company would not comment on individual accounts but cited Twitter’s Hateful Conduct Policy in its decision to suspend Heizman: “you may not promote violence against or directly attack or threaten other people on the basis of race, ethnicity, national origin, sexual orientation, gender, gender identity, religious affiliation, age, disability, or serious disease.”

“We also do not allow accounts whose primary purpose is inciting harm towards others on the basis of these categories,” the spokesperson said. 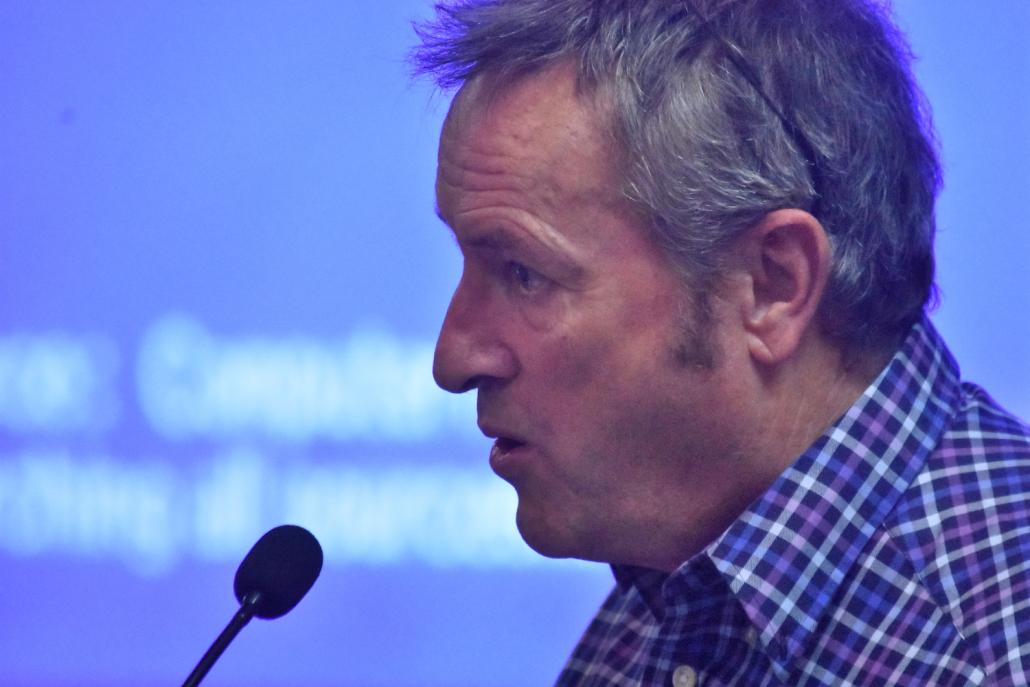 In an introductory speech at the event on Wednesday, the minister U Zaw Aye Maung countered accusations from the United Nations and foreign governments that the Myanmar army had committed mass atrocities against Rohingya Muslims in Rakhine, saying the crisis was rooted in Islamic terrorism and illegal immigration.

He cast the army’s campaign, which sparked an exodus of more than 720,000 Rohingya into Bangladesh, as a legitimate response to attacks in August 2017 by the Rohingya militant group the Arakan Rohingya Salvation Army and a general desire by the Rohingya to “occupy our land”.

“We are not fighting them without reason,” he said, claiming the army’s actions were purely defensive. “We need to protect our land.”

“We want to tell the world they are not our people. They are illegal migrants,” he said of the Rohingya, referring to them only as “Bengali” to impute a foreign origin. By way of explanation, he said, “Their appearance and their language is the same as the Bangladeshi people. When our officials go to [speak with them], they need interpreters.”

Linguists and members of the Rohingya community say their language is related but distinct from dialects spoken across the border in the Chittagong district of Bangladesh.

Zaw Aye Maung, a member of the Arakan National Party, was elected to the Yangon Region government in the 2015 by ethnic Rakhine voters resident in Yangon. He previously held the post under the government of President U Thein Sein.

The 2008 constitution stipulates that ethnic groups who can claim more than a 0.1 percent share of the national population in a given state or region can vote for their own ethnic affairs minister in that state or regional government.

‘I could go anywhere’

The minister introduced Heizman as “a very independent man” who does not have any government or organisational affiliation.

Heizman, who introduced himself as “a top ethnomusicologist”, said he has visited Myanmar regularly since 1981 and was involved in the pro-democracy movement aimed at ending military rule.

He said he had recently returned from a trip to Maungdaw, Buthidaung and Rathedaung townships in northern Rakhine, during which he was given “full permission, no restrictions at all”.

This contrasts with restrictions placed on journalists, most of whom can only visit northern Rakhine State on closely escorted government tours. “I could go anywhere,” Heizman said.

Government newspaper The Global New Light of Myanmar ran a picture, with a brief description, on October 8 of Heizman visiting Maungdaw Township in northern Rakhine, where “he documented burnt-out villages”. The description said Heizman would visit the village of Min Gyi, also known as Tula Toli, the site of an alleged massacre of Rohingya, which journalists have been barred from visiting.

Heizman said journalists facing travel restrictions had no legitimate reason to complain. “Have any of the journalists done anything positive for Rakhine?” he asked, before describing some of the charitable work he has conducted in Rakhine, such as helping to build schools.

He said, “I don’t think at all that the army has done the things it is accused of,” but insisted, “I’m not aligned with the army”.

Heizman was sharply critical of international media, which he called “feverishly one-sided” in its coverage of the Rakhine crisis. “Maybe I’m the real journalist, and you’re all wannabe journalists,” he said.

The event included a screening of a film that Heizman had largely shot during a trip to northern Rakhine earlier this year. The film claims that Rakhine State is the target of a plot to create “an extremist Islamic state”, and that Rohingya militants ordered their people to torch their own houses before fleeing to Bangladesh.

Key material for the film was drawn from interrogations of Rohingya Muslims suspected of being members of the ARSA militant group, as well as interviews with local Buddhist Rakhine, Hindus and members of other communities who claimed to have been attacked by ARSA.

After Heizman, Rakhine historian Dr Aye Chan delivered a lecture on what he said were the historical roots of the Rakhine crisis – large-scale migration from Bengal to what is now Rakhine State during British colonial rule. Aye Chan claimed that, in settling the area, Bengali migrants were animated by Wahhabism, a hardline Islamic doctrine that grew during the 18th century in what is now Saudi Arabia. 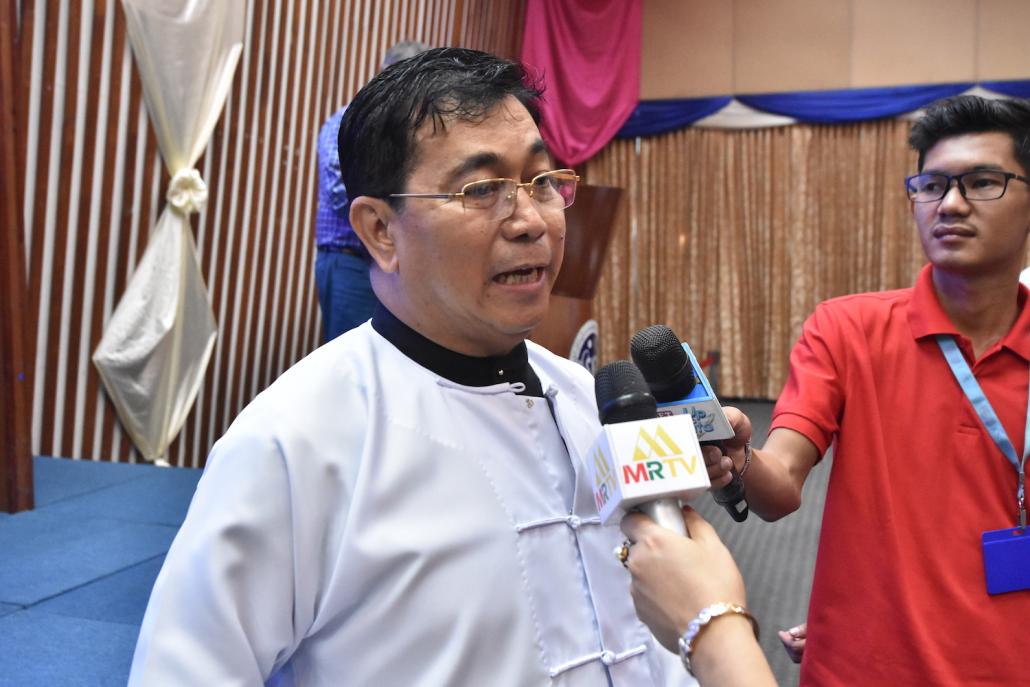 Wednesday’s event was the latest in a series of platforms and apparent endorsements that government and civil society in Myanmar has provided for Heizman.

A UN-commissioned fact-finding report into alleged human rights abuses in Myanmar, which called for Myanmar’s top generals to be prosecuted for genocide, referenced the email in a footnote to its recommendation that “a credible government response should begin with its own officials refraining from using hateful and divisive rhetoric”.

A government enquiry into Buddhist-Muslim “sectarian violence” in Rakhine State in 2012 cited an article by Heizman, “History, Issues and Truth in Arakan/Rakhine State”, in its 2013 report. Heizman’s article presents what it calls the “basic truth” that “the Buddhist Rakhine people are under a real and brutal campaign to seize their centuries old cultural homeland and turn it into an Islamic State”.

In October 2017, when the exodus of Rohingya into Bangladesh was at its height, the Myanmar embassy in London sent a British parliamentary committee “written evidence” on “recent development[s] in Rakhine State”. This two-page document referenced another article authored by Heizman that argued that Buddhists in Myanmar had “a very rational fear” of Islam.

Last month, a pro-Tatmadaw think tank, the Thayninga Institute for Strategic Studies, included Heizman in a panel discussion on the Rakhine crisis at the Novotel Hotel in Yangon.

In January this year, Heizman delivered a talk at the Myanmar Institute of Strategic and International Studies in Yangon, a foreign policy think tank led by former Myanmar diplomats.