The Yangon government has finally tabled a bill to reform the city’s municipal body to parliament, but lawmakers say suggestions made during a recent review process have been largely ignored.

ALMOST TWO years after the National League for Democracy began reviewing Yangon’s municipal law, a draft has finally been released – and lawmakers aren’t impressed, saying that it’s little improvement on the existing statute.

While some NLD officials have said they want the law passed so municipal elections can take place before the Thingyan new year holiday in April, lawmakers say they won’t be pressured into rushing the process.

“The bill needs to be reviewed very seriously,” said Ko Nay Phone Latt (NLD, Thingangyun-1). “The Yangon Region assembly will not approve the bill in a very short period of time. We don’t care about any pressure to approve it. We will discuss and review it carefully.

“We’ve already requested the speaker to not rush the review of the bill,” he said. “Nobody can set a limit on the time for discussions in parliament.”

Nay Phone Latt added that he would focus all his attention on the draft bill until the matter was concluded. “This bill is very important for our city.”

That’s about the one thing that everyone can agree on.

When he submitted the bill to parliament on February 2, Yangon Mayor U Maung Maung Soe said it would ensure the economic and social development of the city.

“Yangon is only over 300 square miles but the population density is huge. So we need more space, pure drinking water and safer buildings, which the bill provides for,” the Myanmar Times quoted him as saying.

“We want residents to be able to enjoy their right to live and work in Yangon and more businesses to open in Yangon.”

The bill does still contain a number of important changes to municipal governance, including to the composition of the Yangon City Development Committee, which is led by the city’s mayor.

Under the 2013 law, YCDC has nine members, four of whom are elected. The bill proposes increasing this to 11, of whom six would be elected.

By-laws presently state that registered households can cast one vote in municipal elections, which in 2014 meant there were only 400,000 voters in a city of 5.1 million. The new law would give everyone over the age of 18 a vote. However, if strict residency requirements are included in the amended by-laws – for example, that voters need a household list registered in Yangon –many may still be unable to exercise their right to vote. 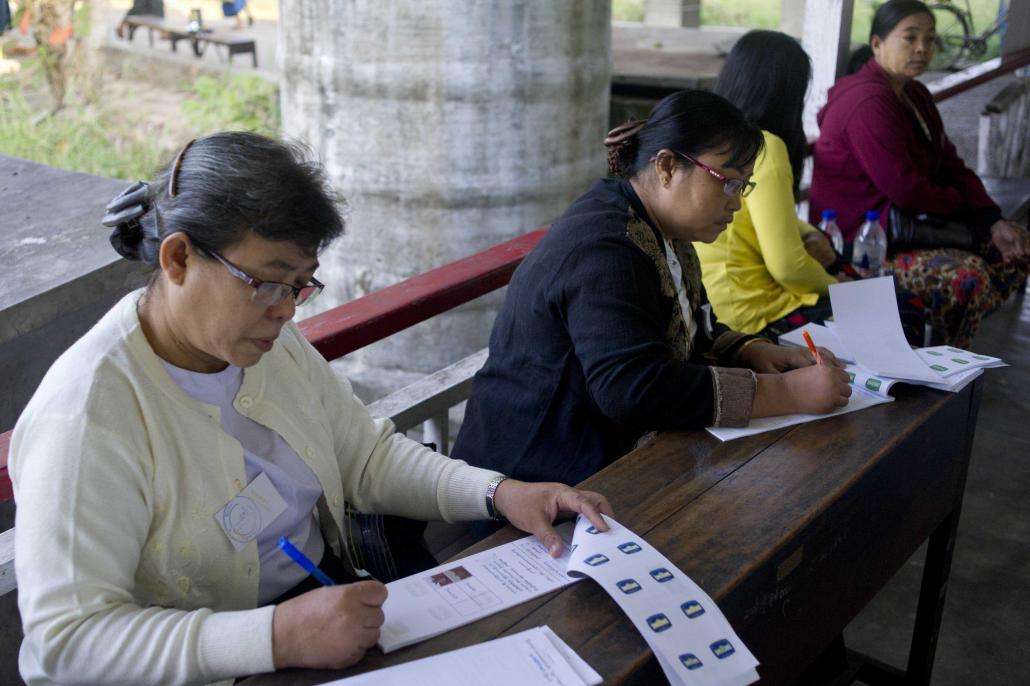 Volunteers prepare at a polling station in Yangon on December 27, 2014, for the city’s first municipal vote in six decades. Only 400,000 out of the city’s 5.1 million residents were eligible to vote and turnout was barely 25 percent. (AFP)

The number of departments within YCDC would be halved, from 22 to 11. Each department will be headed by a six-member authority board. Each board will be led by a YCDC member and also include the head and deputy head of the respective department, and three civilian experts.

But even these changes have come in for criticism. The key positions on YCDC – the mayor, secretary and joint secretary – are reserved for members appointed by the government, not those elected by the public.

“We want elected members to be included in key policy-making roles too,” said U Kyaw Zeya (NLD, Dagon-2). “When it’s reviewed in parliament, I’m going to try and amend that section.”

Another prominent critic, former regional lawmaker Daw Nyo Nyo Thin, said the changes were minor and did little to advance governance reform. Like Kyaw Zeya, she said she couldn’t see much evidence of input from Singapore.

“Only the voter eligibility and number of departments have changed,” she said. “And elected members will be puppets because all the policymaker roles are reserved for appointed people. It’s not democracy, it’s a sham – the mayor will control the committee like before.”

The bill was drafted with input from Singaporean experts based upon the 1922 City of Rangoon Municipal Act. Although the act remains in place, it has been amended several times and supplemented with additional legislation, such as the 2013 YCDC Law.

Lawmakers had begun a review of the 2013 law shortly after taking office. They planned to amend the electoral framework and tackle the rest later. But their plans were put on hold in late 2016 when Daw Aung San Suu Kyi visited Singapore. After her trip, the state counsellor instructed the Yangon Region government to review all existing municipal laws and by-laws to overhaul governance of the city in cooperation with experts from Singapore. She famously said at the time that she wanted Myanmar to overtake Singapore in 20 years, and municipal governance reforms were seen as a means of driving growth.

Little was heard about the process until September last year, when Yangon Chief Minister U Phyo Min Thein put the issue back on the agenda by forming a 37-member committee to review the bill.

Yangon Region Hluttaw Speaker U Tin Maung Tun (National League for Democracy, Dagon-1) led the review committee, while parliamentary bill committee chair U Thein Myint (NLD, Tarmwe-2) was the secretary. According to the undated order from the chief minister, the committee included five additional lawmakers, Yangon Mayor U Maung Maung Soe, regional government officials and representatives of non-government groups such as the Association of Myanmar Architects.

Nay Phone Latt was one of the lawmakers on the committee. He said members were only given around one-and-a-half months to review the bill and send it back to the government with suggested changes. Due to the time limitations, they focused on reviewing the electoral system, the organisation of YCDC and penalties for infringements.

Nay Phone Latt said that while the committee recommended many changes, these were nearly all ignored by the government. He cited as an example the committee’s suggestion to create a deputy mayor position that would be filled by an elected YCDC member.

“The version of the bill submitted to parliament is almost exactly the same as the version that was sent to the review committee,” he said.

Kyaw Zeya added, “There’s nothing new in the bill. The other thing that my ear says they met with Singaporean expertise suggestion but they were not used it.”

He said lawmakers would compare the bill with Singapore’s municipal law and see whether there are any similarities.

Thein Myint, the bill committee chair who was secretary of the body that reviewed the bill, confirmed that the government had ignored most of the committee’s suggestions.

“Now we are examining the bill to see exactly what changes were made to the original,” he said.

Phyo Min Thein had indicated last year he wanted municipal elections to take place in March. It’s unclear whether he hopes to stick to that timeline, but Thein Myint said lawmakers would approve the bill during the current session, which will end in March.

Lawmakers like Nay Phone Latt have made clear that they will not be rushed. But Phyo Min Thein has some important allies in parliament who could ensure that it’s shepherded through quite rapidly. Chief among these allies is the speaker, Tin Maung Tun, who controls the parliamentary agenda, and Thein Myint, whose committee will vet the bill and write a report to inform lawmakers’ voting on the issue.

Phyo Min Thein’s influence with Tin Maung Tun was evident in 2016, when the speaker agreed to the chief minister’s request to shelve planned amendments to the YCDC Law – even though lawmakers had already spent a significant amount of time on the process.

Ma Thinzar Shunlei Yi, an advocacy coordinator for Action Committee for Democracy Development, said the Yangon Region Hluttaw should conduct a public hearing on the bill to get public input.

She agreed that they shouldn’t rush the review process and that extensive discussions were needed.

“If parliament approves the bill under pressure from anyone,” she said, “it will be a bad sign for the future.”