Yangon’s long-suffering commuters finally have something to celebrate after the launch of the Bus Rapid Transit service.

A cool breeze buffeted Inya Lake and the traffic on Kabar Aye Pagoda Road was heavy. Opposite the HAGL Myanmar Centre a small group of people waited for a new commuting experience: travelling on one of Yangon’s new BRT buses.

Many commuters celebrated the launch of the Bus Rapid Transit service on February 9 by posting images on Facebook of themselves and others riding the comfortable, air-conditioned buses. Some posts showed the electronic tickets that can be topped-up and will eliminate the need for conductors.

The BRT route runs from Htaukkyant junction to the 8 Mile intersection, where it splits and plies both Kabar Aye Pagoda and Pyay roads. The routes terminate at the junction of Strand and Sule Pagoda roads.

“Because there’s no conductors, we have peace of mind,” said Ko Htin Lin Thein, a passenger who recently returned home from living in commuter-friendly Singapore.

He had just finished speaking when an older bus pulled up at the stop. Two boarding passengers were roughly pushed inside the crowded vehicle by the conductor.

“Look at that,” said Ko Htin Lin Thein. “The conductors are so rude and treat commuters like animals,” he said. 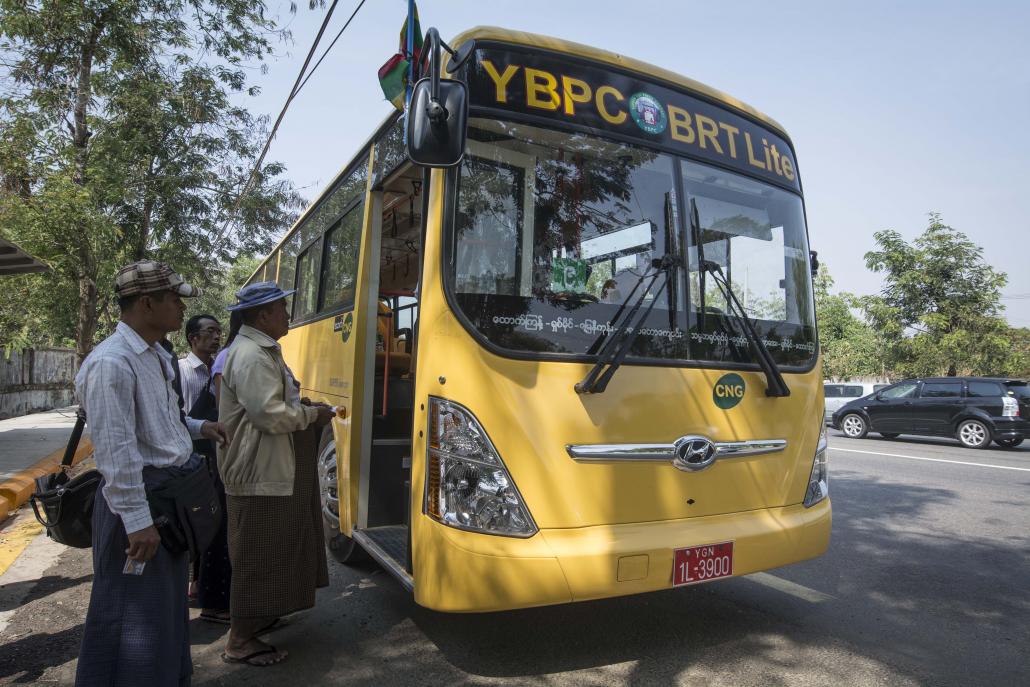 The drivers and conductors of Yangon’s buses have a notorious reputation among commuters. It is common for drivers to race each other, breaking speed limits, and they often stop in the middle of the road, forcing passengers to alight in traffic. Conductors are reviled for coarse behaviour and the rough way they handle boarding or alighting passengers. Passengers who complain about unsafe driving have been assaulted by conductors.

“We have been trying to introduce this system since 2013,” said Dr Maung Aung, chairman of the Yangon Bus Public Co Ltd, the operator of the public-private BRT service.  The planning for the introduction of the mass transit system had included a series of workshops at the Union of Myanmar Federation of Chambers of Commerce and Industry, he said.

The workshops had followed the release by the Yangon City Development Committee and the Japan International Cooperation Agency of a transportation plan for Yangon that initially proposed 11 BRT routes.

Cost and other reasons resulted in the number of proposed routes being trimmed to five, which is why the service is known as “BRT lite”. The five routes could not be launched simultaneously and the service started with the Htaukkyant-downtown route. Most of the city’s buses are privately-owned and a reliance on fare revenue means they are income-oriented, with little attention paid to service quality and adherence to traffic rules.

BRT driver Ko Soe Naing Min, looking smart in his company uniform, said the drivers had undergone extensive training before the launch of the service.

“We have to be careful where the road is narrow and when speeding cars try to overtake us,” Ko Soe Naing Min said. “Strict discipline is imposed on all the drivers,” he said, adding that they are paid K300,000 a month plus overtime and provided with a free lunch.

Dr Maung Aung said a huge investment was needed to launch the service. “In other countries, big companies take the lead and governments subsidise; they run that way,” he said.

For the BRT project, the government contributed K10 billion and five prominent companies – Shwe Than Lwin, Shwe Taung Group, Diamond Star, Zeya & Associates and Fishery & Marine Products – each contributed K2.5 billion. The public has a K5 billion stake in the project through the sale of shares.

“Big companies are limited to no more than K8 billion each to ease public concerns about crony domination,” said Dr Maung Aung.

“As you know, if it is state-owned, it will be spoilt in a short period of time; to last long it must be privatised,” he said, adding that the Yangon Bus Public Co did not expect to make a profit in its first year of operations.

“It will take time for people to become familiar with the system,” he said, referring to traffic management issues.

“We announced one month in advance that the extreme right hand land is restricted for use by buses only and should not be used by private vehicles but it has not happened yet.

“Such weaknesses still exist, but we have plans to educate and take action against those who violate traffic rules.” “We plan to cooperate with them; the bus owners and the company must cooperate to make the system successful,” Ko Ta Yoke Lay said.

He acknowledged that private bus owners had initially opposed the introduction of the BRT service. “We were worried that we would be replaced,” he said.

Ko Tay Yoke Lay said the K300 flat fare for using the BRT put it at a cost disadvantage to private buses, which charge fares between K50 and K200 set by the Yangon Region bus control committee.

Dr Maung Aung said he was confident the government will support the BRT. “I’m ready to work in hand in hand with the government and I believe it will give me support because, after all, this service is for the convenience of the public,” he said.

Meanwhile, commuters are delighted with the new, air-conditioned BRT buses and are hoping the service will be a lasting success.

“The bus stops need to be less widely spaced, but it’s only the start,” said Ko Htin Lin Thein. “When I ride the BRT buses I feel like I’m back in Singapore,” he said.