World Bank’s Abdoulaye Seck: ‘Our commitment is to support the Myanmar people’

Last month, Senegalese national Mr Abdoulaye Seck completed his stint as World Bank’s Myanmar country manager after nearly three years in the role. Before taking over as the organisation’s country manager in Afghanistan, he spoke to Frontier’s Oliver Slow about the World Bank’s priorities in Myanmar, advice for his successors and some personal reflections from his time in the country.

How would you sum up your experience in Myanmar and what are you most proud of having achieved during your tenure?

I came to Myanmar back in 2014, when the country was in the middle of its transition. The World Bank wanted to support the transition, and we think that Myanmar has done extremely well.

For instance, if you look at the transition to peace, to a market economy, and to a more democratic society. All these fronts we have tried to help, and I would certainly say that the Myanmar people can be extremely proud about what has been achieved.

An important part of what we have done is about the people; about empowering people for inclusive growth. This is certainly what the World Bank has tried to achieve. And there have certainly been a number of challenges, be it on education, health or the growth of the people. 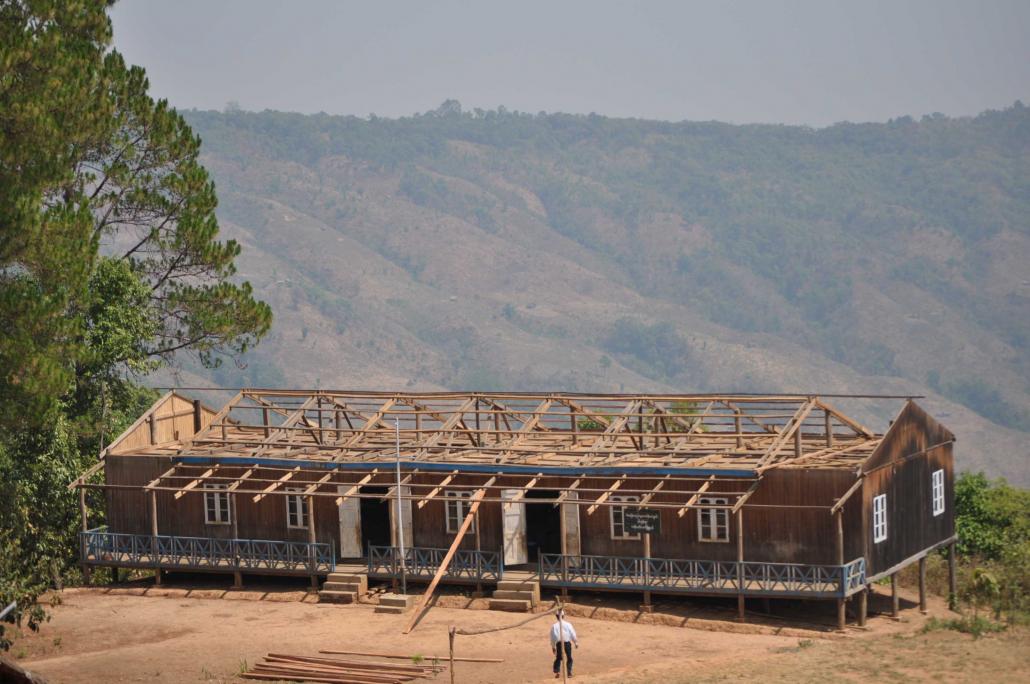 A school in Chin State being renovated under the World Bank’s Community Driven Development project. (Supplied)

If you look at education. You see in this country, for every 10 children that start school, less than three of them will finish their education. That’s a huge loss for the country. So we look at that, as well as at issues related to the quality of education. What we do for that is an early grade reading assessment by looking how kids can read a single word between grades 1 and 3. And, after reading a text, how they can answer a question about it, and the statistics are very troubling.

The World Bank also works around keeping kids in school. We understand the challenges families are facing, whether they should send kids to school or for them to earn an income for the household; that is a very tough decision for parents to make. With the support of the World Bank, the Ministry of Education has helped to keep about 150,000 kids in schools by providing a stipend.

Is that a sustainable approach? Offering children money to stay in school?

I would certainly say so. There is no better investment than in people. What is not sustainable is to have this huge dropout rate of kids leaving the school system, and not having the skills to participate in the job market.

Lack of skills were listed as the fourth-biggest issue for firms we interviewed back in 2014 in the investment climate assessment. The World Bank has supported this effort to keep kids in schools, and also to improve learning outcomes by monitoring schools.

But let me also illustrate the point about health. Some of the statistics are very troubling. When I see my wife and three daughters, I realise how blessed I am. Because in Myanmar you have many mums who will not survive the delivery of a child.

So what we have done on the World Bank side is to support maternal healthcare, and newborn healthcare. Making sure that the delivery is assisted by skilled health workers, and making sure that kids and mums get the proper care before, during and after delivery. We are also supporting health financing towards universal health coverage because we know that health financing is a huge issue.

How close are we to seeing universal health coverage implemented?

To be honest we are very far from that. But we saw the National Health Strategy released in March and in my view it offers a very encouraging vision of where Myanmar is heading. Right now, the baseline is not very good because if you look at the statistics, there are about two million who are poor because of health spending. 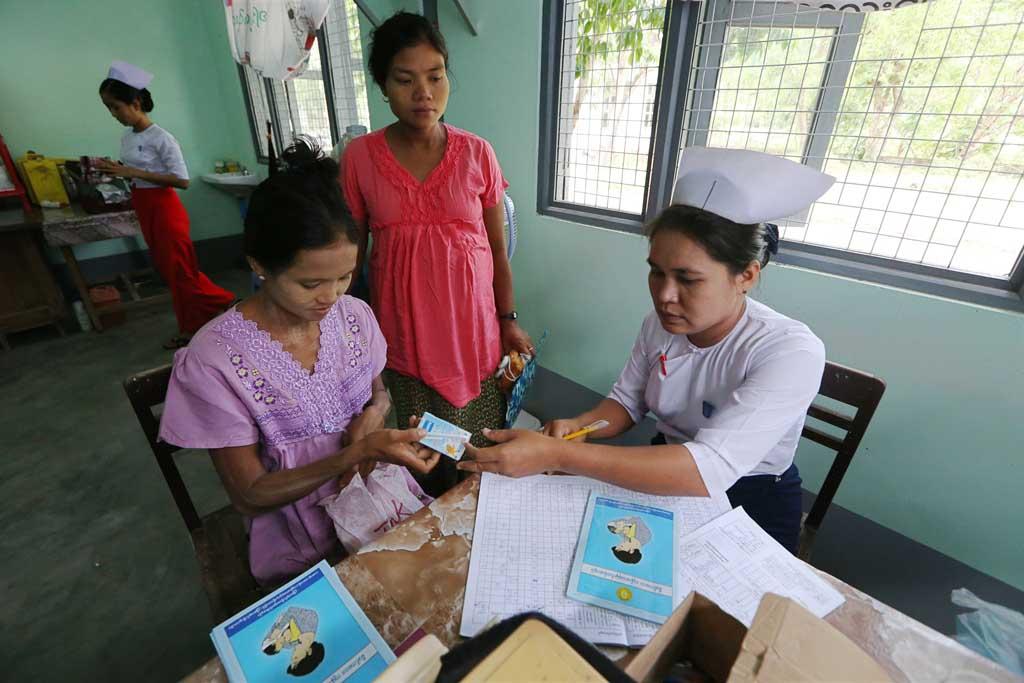 Improving health and education has been a major focus for the World Bank since it resumed activities in Myanmar. (Nyain Thit Nyi)

And lastly, how I would define World Bank intervention over the past few years, it is about empowering the people. Giving them better education, better health and improved nutrition.

What about some of the biggest challenges you’ve faced in your role? Is there anything that hasn’t been achieved that you set out to do when you arrived in this role?

When we talk about the transition, I would say that we are all pleased that the Nationwide Ceasefire Agreement was signed [in October 2015, by eight armed groups], and for the peace process it was a very good landmark agreement to have signed. Still it looks like we are very far away from a time when peace will be a reality.

Obviously I’m very realistic about how fast peace can happen. We’re not talking about achieving peace overnight, but I think there is an overall sense that a lot more could be done, so we are looking forward to seeing that.

How has the World Bank supported the peace process?

In a number of ways. We have supported what is now the National Reconciliation and Peace Centre, and are supporting institutions that are critical towards peace, and have committed to supporting some of the dialogue between the Myanmar government and ethnic armed organisations.

And very concretely we had this programme for national development that I think Myanmar should be extremely proud of because it has been very successful in improving the livelihoods and access to infrastructure in some of the poorest communities.

One example I want to talk about is in Kayah State. There are six townships in the state, some are controlled by the government and some contested by ethnic armed organisations.

And yesterday in a meeting with the State Counsellor [Daw Aung San Suu Kyi] where we emphasised again how important it is that people see the evidence of peace. That where peace is taking place, people will see that it delivers better services, better lives and better conditions for people.

Things are quite different in the north of the country, where there is continued fighting, huge displacement and general distrust of the peace process. How can the peace process move forward?

It’s a very important question. As I said earlier, the World Bank Group mandate is around the development agenda and this is where we are offering our support, through dialogues that are being led by the state counsellor.

I certainly see a lot of developments, some of them positive, some of them less so. What I can say is that there is no better way than for the groups to sit around the table and have a good quality dialogue. Our commitment is to support the Myanmar people, providing a knowledge base and supporting the access to services and development in those areas.

Looking long term, Myanmar should be very proud of a number of major reforms that have taken place over the past five years. The Central Bank now has some independence from the Ministry of Finance, there is the new investment law and the regulations around this very important agenda. So I think a number of really big reforms have happened. Clearly this country needs to do some more, and there are more reforms in preparation and I look forward to seeing that.

Poverty is another major issue. How can Myanmar ensure that its development benefits all of its citizens?

What we try to help countries with is to eliminate extreme poverty and make sure that prosperity is shared. I think at the end of the day, people with good education and good health will be able to take advantage of opportunities. But clearly you need to provide the opportunities, and there I would look at the private sector. One of the third pillars of our strategy in the country is about supporting a dynamic private sector for job creation. 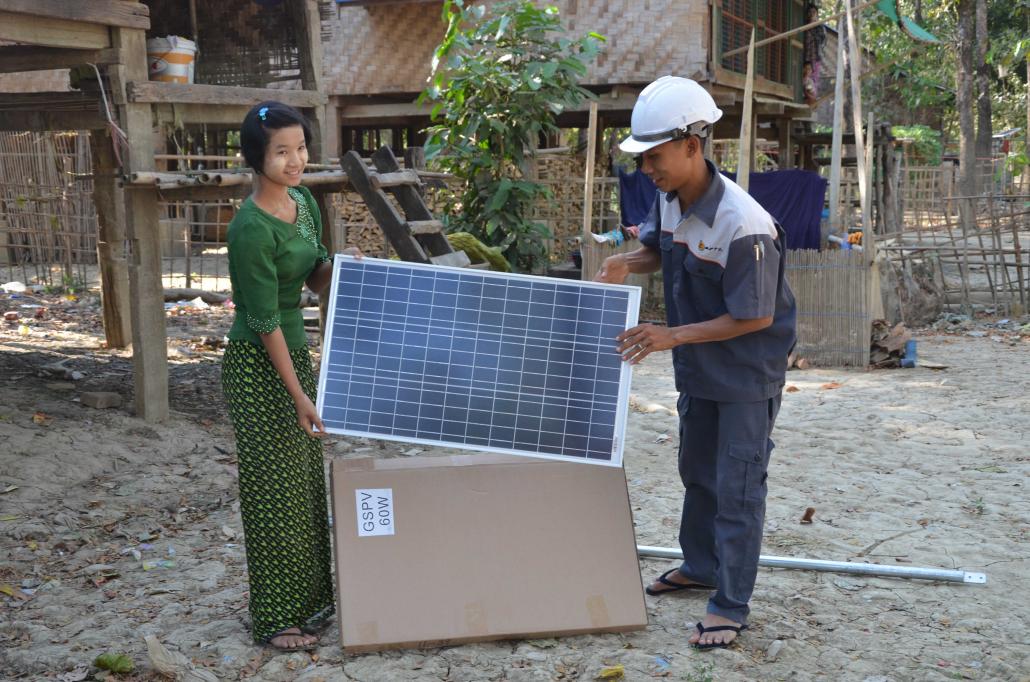 Solar panels are an integral part of the World Bank’s project for off-grid power. (Supplied)

In that area, we did an assessment in 2014 when we interviewed over 700 firm owners and managers. We asked what is holding them back, and what needs to be done to expand, create jobs and to employ young Myanmar people and provide them with a good income.

What advice would you have for your successor?

First of all, I’m extremely pleased about the new management team coming to Myanmar. The programme is in absolutely good hands, so I’m pleased because I love this programme and I love this country. I think they are bringing a lot of good experience.

I would say it has to be about the people of Myanmar, and the best advice I can give is to listen to what the people of the country are saying, travel a lot around this country. So I think it is about being open, listening, being ready to offer support and being ready to make adjustment as one goes.

And what about some personal reflections on your time here?

I can say these have been the best years for me professionally as well as personally. A lot of that is about the particular time I was here; I came here for the country’s transition and I was here during the 2015 election and was in the room when they signed the NCA. So it’s been an amazing time to be here.

Obviously you could always look at how things could go better, but I think patience is important. There is the famous saying by Chinese Premier Zhou Enlai in 1972 when Richard Nixon visited China and asked about the impact of the French Revolution in 1789, he said, “It’s too early to tell.” [laughs]

I really do think that in Myanmar a couple of decades from now, people will look back on this time and say this country has done extremely well. There have been some hiccups and bumps along the way, but I think in the longer term we will see it as a remarkable transition and was I able to be in the middle of that. It’s really wonderful and I don’t know if I will see it again.