Women of the faith

As with many other countries, women experience discrimination in the main religions in Myanmar for reasons that are justified by traditional beliefs.

IN COMMON with much of the world, tradition, culture and even superstition have relegated women to secondary positions in the main religions practised in Myanmar.

Nuns, whether Buddhist or Roman Catholic, do not enjoy the same status as monks or priests, and men are in charge of running mosques and Hindu temples.

Although most women quietly tolerate the discrimination they experience, a few are questioning their treatment as second-class believers.

In Buddhist culture, a nun is not accorded as much respect as a monk; nuns cannot be ordained and do not have the same social status. Nunneries tend to be visibly poorer than monasteries. When nuns go out to collect alms, they get fewer donations; it’s common for people to apologise for not donating by saying they don’t have any change to give.

There’s even a saying in Myanmar that highlights the discrimination against the approximately 60,000 nuns in Myanmar: “Thilarshin dwe hmar bon ma shi bu” (roughly translated as ‘nuns do not have an abode’).

But while the treatment of nuns is well known, it is rarely discussed openly. In early August, when a nun spoke out on social media about how she had been ignored by a group of donors who came to visit her university, she was criticised by many who said it was inappropriate for a nun to complain about her situation and to express emotion.

Most of the critics appeared to be men, however; many women also spoke up on social media in support of her.

The nun, known as Daw Esukhacari, lives at the Shwekyaryone nunnery in Bahan Township and is studying for an MA at the Sitagu International Buddhist Academy in North Dagon Township.

Esukhacari wrote on Facebook that when she was having lunch in the academy’s dining room where 24 monks were also eating, laity ignored her when they offered donations. 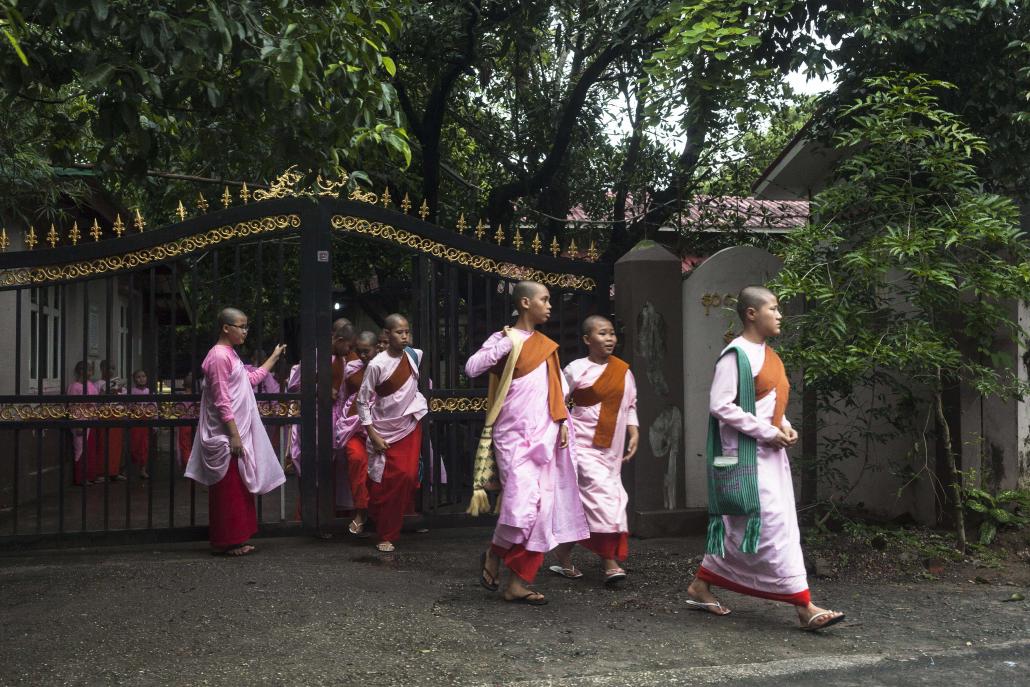 Nuns head out on their alms round in Yangon in late August. They typically receive fewer donations than monks. (Theint Mon Soe aka J | Frontier)

The refusal to show recognition was the main reason Esukhacari posted her complaint on Facebook. However, she did not blame the donation group; she said she believed they had simply not considered that a nun would study for an MA.

“They think only monks study for MA degrees,” she told Frontier.

“I was so ashamed at being left out of the group [to whom donations were given],” she said, adding, “The purpose of the post was definitely not to receive money.”

Nuns face a lot of hardships, including sometimes being harassed if they travel on buses because they are expected to only travel on foot as they make rounds to collect offerings.

Because of a lack of nunneries, many nuns live at meditation centres or monasteries throughout the country. However, Esukhacari said they are normally expected to earn their keep by doing many chores, including providing assistance to the monks in charge of the centre or monastery.

There’s also a misperception that most nuns lack education, she said, adding that many nuns were highly educated.

Despite the criticism she received, Esukhacari said she did not regret her post on Facebook and had been pleased by the support some people had shown.

“As a result of the post, the monks [studying in the same class] show more care towards me than usual, and even a taxi driver asked if it was me who had uploaded the post on Facebook,” she said. “[When I said yes], he became very polite – more than I had ever experienced.”

Sister Elizabeth Chit Pon, 32, also known as Chit Pon, became a nun in 1985 after graduating from university. She works for Garuna Mission Social Solidarity, a local NGO under the Catholic Bishops Conference of Myanmar.

Sister Elizabeth said she had rarely experienced blatant discrimination, but there had been a few times when she was treated like a second-class citizen.

She said at Roman Catholic ceremonies, it was common for men to be seated in the front row, and women behind them.

“When I reflect on this, I think it is because of Myanmar culture,” Chit Pon said.

The culture in the country is that men are superior, she added.

“I think gender discrimination comes from each family, because the way the parents teach their children is very important,” she said. 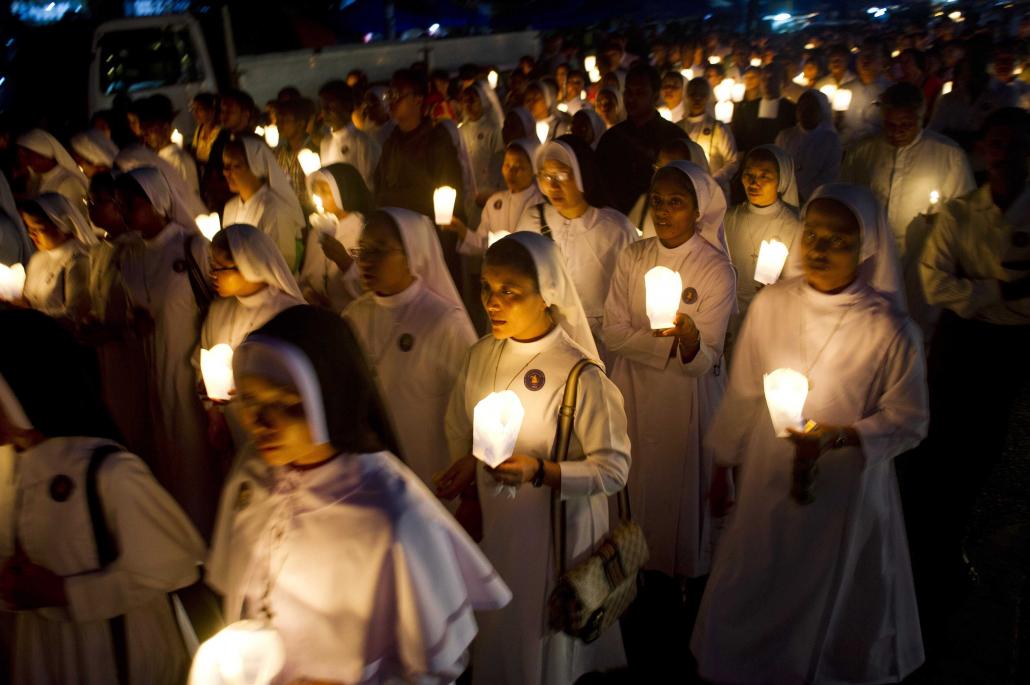 Catholic nuns hold candles during a procession to mark the 500th anniversary of the Catholic church in Myanmar in November 2014. (AFP)

Because priests are men, people believe that they are better at handling difficult situations than women, Sister Elizabeth said.

Sister Elizabeth said that if men and women had equal roles in politics, society and religion it would benefit the community.

“When people see the word ‘organisation’ they think it must be a group being led by men but this is wrong because women are also taking leadership roles,” she said.

The widespread perception in society is that women should follow men.

Sister Elizabeth said a barrier to equality was that many women regarded some roles as being exclusively for men.

Women sometimes lack confidence in their ability to perform leadership roles and instead provide support to men “from behind the curtain”, she said.

Many women were reluctant to seek prominent leadership positions because they worried how they might be perceived in roles usually reserved for men.

However, women in Myanmar could look up to an inspiring example of a woman who had ignored or overcome such cultural barriers.

But she doesn’t believe women should become priests.

“Why not women priests? That is the trendy question most of the women in the world are asking,” she said, laughing. “If women ask to become a priest, I assume they are extremists because when women are given roles like this they can’t do them well.” 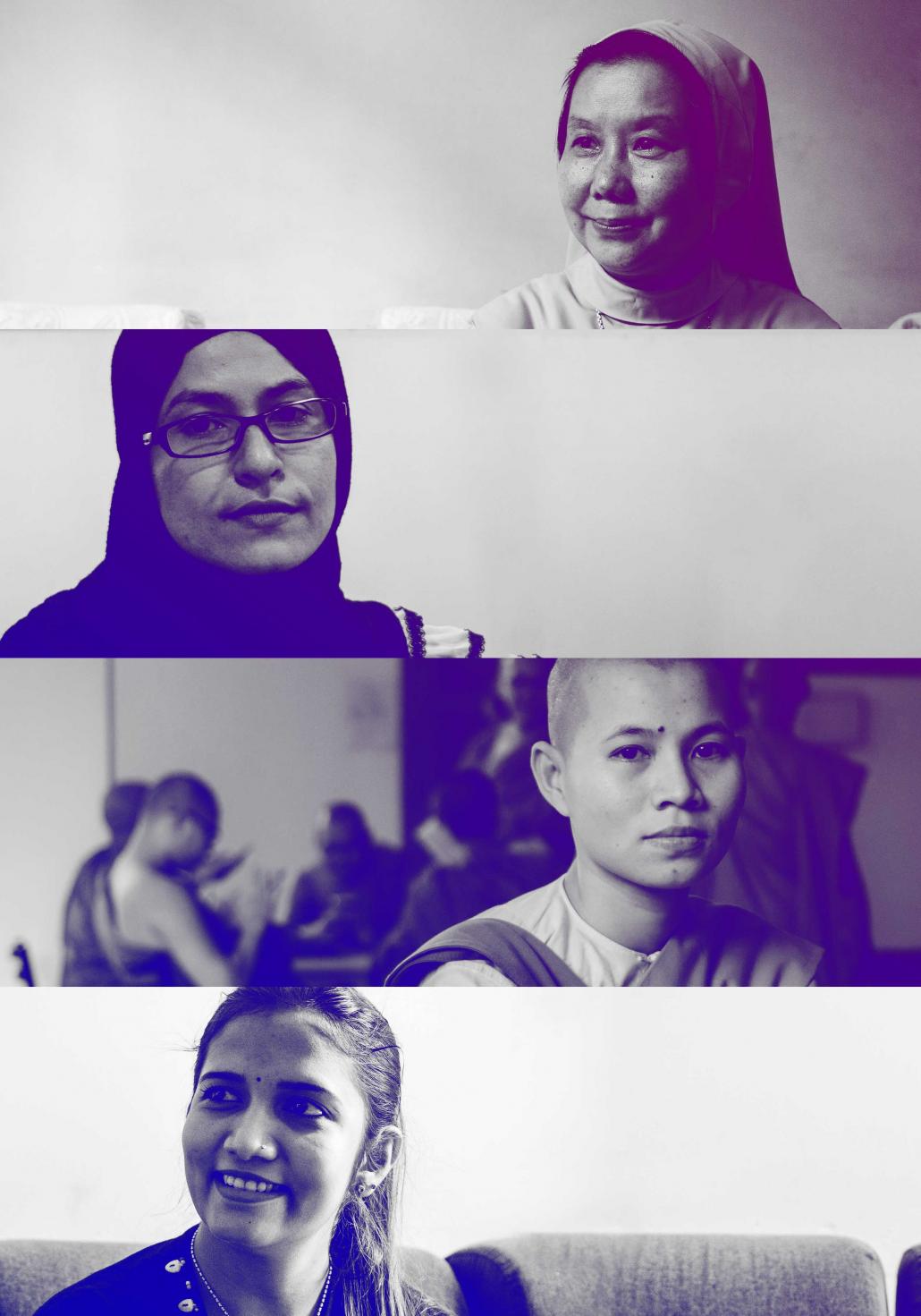 “Allah did not directly prohibit the women doing from anything, but [discrimination] is derived from the culture,” said Dr Thet Su Htwe, who provides family planning advice to Muslim men and women.

Men and women are physically different but there is no need for women to be oppressed by discrimination, Thet Su Htwe said. “That is not reasonable,” she told Frontier.

Citing the example of giving birth, Thet Su Htwe said it required courage and involved pain, but women never discriminate against men because they cannot reproduce.

She said problems had sometimes arisen in religions because culture and tradition had become embedded in belief, and this was why the space for women had become smaller.

An example of equality in Islam was that the Hajj, the pilgrimage to Mecca that all Muslims are required to undertake at least once in their lives if they can afford the cost, was performed by men and women together, Thet Su Htwe said. 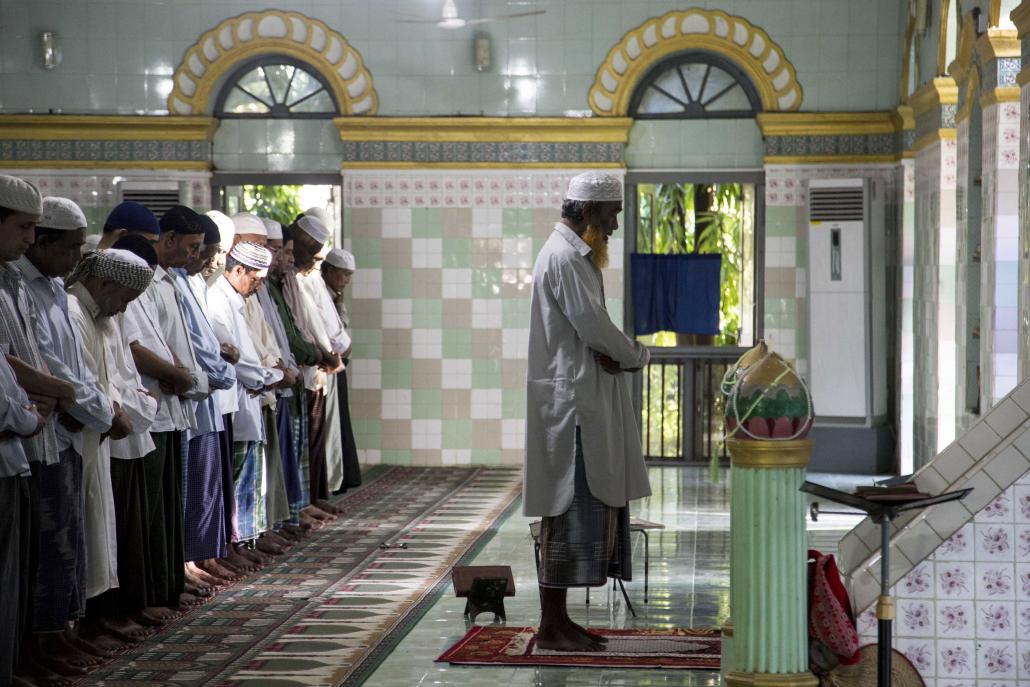 She said it was widely believed in Myanmar that woman who follow Islam were not allowed to enter a mosque, but this was incorrect. The sexes were required to be segregated in a mosque and there was often not enough space for both men and women.

Only a few mosques in Yangon were big enough to accommodate women and men, she said.

The Islamic holy book, the Koran, suggested that women pray at home if possible because it was appropriate that they should be with their children.

She said that most women do not even think to complain about discrimination, and more efforts need to be made to raise awareness about equality.

“Women need to be aware of how we are treated in regards to opportunities to participate in religion,” she said. “We need to work for [opportunities].”

Ma Lwin Mar Oo, a Hindu also known as Ms Meera Santosh, is a youth leader in the Religion for Peace group that is working to promote communal harmony and understanding in Myanmar.

This injunction was probably the result of the belief that women were weak while menstruating and need to rest but due to superstition attitudes had changed. Menstruating women were regarded as being “dirty” and touching a god while they were having their period was a terrible sin.

“They are told that they are committing an awful sin,” Lwin Mar Oo said. 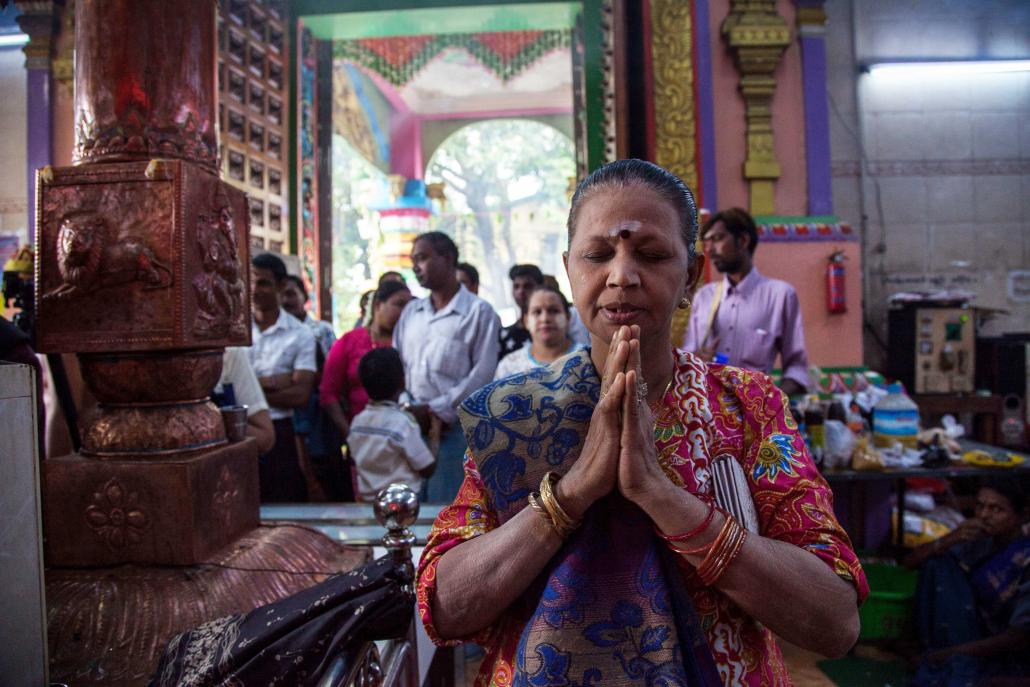 A Hindu woman prays during an offering to Shani in June 2016. (Theint Mon Soe aka J | Frontier)

“I even still follow this and think that it is also sin to touch a god,” she told Frontier.

A menstruating Hindu woman is expected not to enter a temple for a week.

When an important Hindu ceremony was nearing, such as a “Durga Pooja”, Lwin Mar Oo said, amid laughter, that she prayed it would not coincide with her period.

“Fortunately, the god has helped me; it has never happened,” she said, adding that if her period did coincide with an important religious ceremony she would wish she had been born a male.

Lwin Mar Oo said she hoped the discrimination towards women in Hinduism would gradually change.

“If there is change and girls have more freedom like boys,” she said, “fewer girls will wish to be boys.” 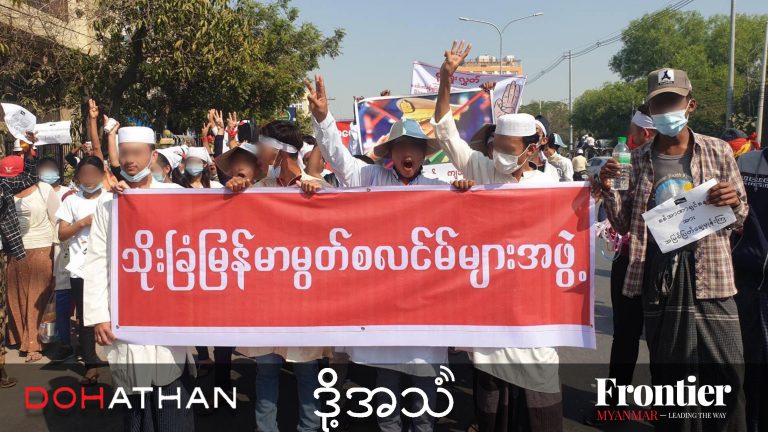