International software companies are slowly discovering the appeal of setting up operations in Myanmar, where the local IT workforce is young, cheap – and much more female than elsewhere in the world.

OF THE 10 software developers at Axon Active’s Yangon office, nine are women.

It wasn’t what country manager Mr Dominik Sauter had expected when he began setting up the Myanmar branch of the Swiss offshore software development company.

“I didn’t choose it,” Sauter said. “But when I recruited my first batch of developers, I received applications almost exclusively from women. And the few male candidates I met seemed to be timid.”

This ratio, though, is not particularly unusual in Myanmar’s tech sector. While there are no figures on the gender ratio of the country’s total IT workforce, which spans approximately 2,000 companies from telecommunication providers to hardware stores, it is reflected in other indicators. For example, around 70 percent of the 3,000 graduates from Myanmar’s 25 computer universities are women.

Yangon-based innovation hub Phandeeyar has seen a similar trend. Of the 16 tech startups it has invested in, eight are led by women. Twelve of the 20 graduates from the Yangon chapter of Founder Institute, a global tech-entrepreneurship programme, are women.

This gender parity, if not female dominance, is highly unusual in an international context. Almost everywhere in the world, women are a minority in the tech field. Last year’s Women in Tech Index, compiled by tech career platform Honeypot, showed that men fill three out of every four tech jobs in the United States.

Asked why they thought women were so prevalent in Myanmar’s tech industry, members of the Axon Active team suggested it was because they had better communication skills, which are increasingly in demand in the IT industry.

“It might be true that men are better when it comes to the technical, hard skills such as programming languages – the nerdy stuff,” said Ma Aye Chan Moe, a 22-year-old developer for Apple’s operating system iOS who works at Axon’s Yangon office. “But women are stronger when it comes to soft skills, such as communication among the developers and with the client.”

But Mr João Dutra, Phandeeyar’s startup ecosystem director, said this does not explain why other countries have a lower proportion of women in technology.

“It seems to hold true that stereotypically female qualities like emotional intelligence or communication skills are more valuable in agile work forms,” Dutra said. “But these qualities are equally valuable in tech all over the world, where women are not as dominant in tech yet.”

Rather, Dutra points to the notion of legacy when trying to explain why men appear to be less dominant in Myanmar’s tech sector. “Around the world, youngsters have learnt for decades that a career in tech was something to be pursued mostly by men. There, this legacy still prevails,” he said.

Myanmar has no such legacy because it has only had a tech industry based on digitalisation for five years. “It’s a fresh start without prejudice, in an era where female qualities are more appreciated,” Dutra said. 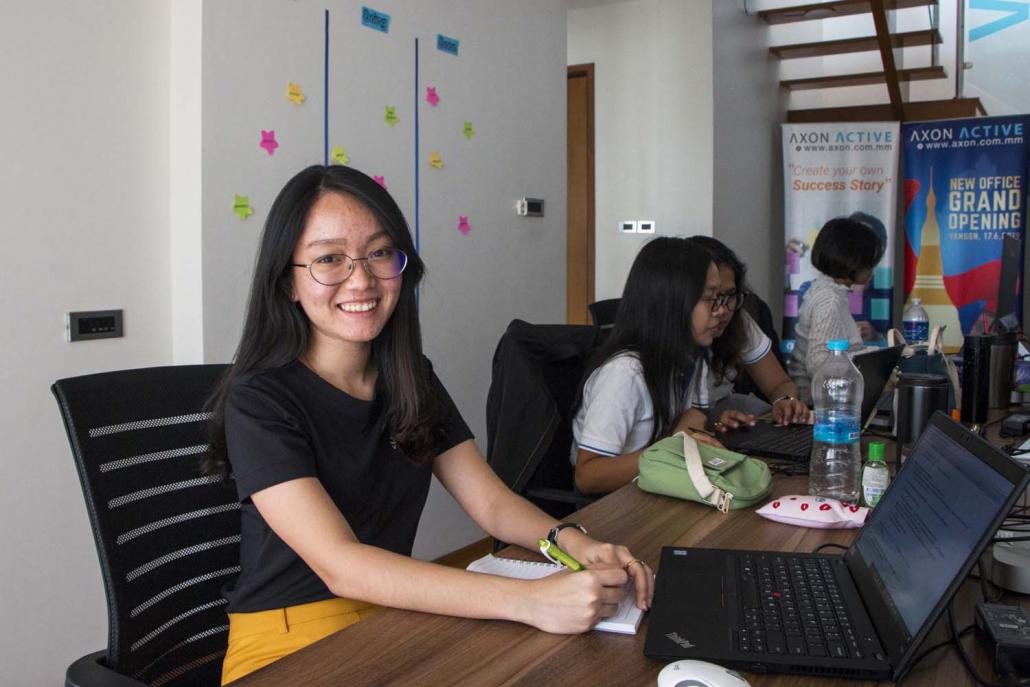 Axon has been operating from Vietnam for more than 10 years, where its 500 software engineers assist the IT departments of large Swiss financial corporations, among many other firms. Rather than develop software, Axon recruits and trains local software developers, providing them with everything they need to serve clients in Switzerland.

One of these requirements is a stable internet connection – for example, so they can Skype with clients whenever they need to. Five years ago, a Skype call would have been almost impossible in Myanmar. But Myanmar’s telecoms market liberalisation has prompted an internet boom, in which the price, speed and availability of both mobile and fibre internet has improved dramatically.

Myanmar also boasts a relatively cheap workforce. A university graduate can expect to first earn around US$200 a month and something between $300 and $500 after one year. Senior developers, who have been in the job for more than three years, earn between $1,000 and $2,000.

As a result, Myanmar’s IT sector is attracting firms like Axon in growing numbers – around 50 offshore software development companies have set foot in Myanmar since 2014, industry experts estimate. Most are from Japan or Singapore, where high labour costs and strict immigration rules encourage them to outsource work rather than hire locals or bring in skilled labour.

Axon is thought to be the first Western offshore software developer in Myanmar. Even though it had already offshored to Vietnam, it’s in Myanmar for the same reason as everyone else.

“In Vietnam, the competition for talent has become much more fierce lately,” Sauter told Frontier at his office in Mayangone Township, close to Yangon airport.

Although, it’s not actually an office. Sauter lives on the upper floor of the two-storey residential building and has installed desks for staff on the ground floor. “It‘s all very improvised, since we just started in June,” he said.

Phandeeyar – the name means “creation place” – was established in 2014 to drive home-grown tech development and innovation. Through its training sessions, its Accelerator Programme, its Maker Center and coworking spaces, it has supported a new generation of tech entrepreneurs and workers needed for Myanmar to make what it calls a digital leapfrog.

In the process, the country may also be making a gender leapfrog: one to a tech sector that is gender-egalitarian or even female-dominated.

However, Dutra cautioned that the benefits of this gender leapfrog were still confined to a “very small, privileged and internationally oriented minority of the population”.

And not everyone thinks the trend is positive. “There are too many girls at computer universities,” said U Zaw Htut, the secretary general at the Myanmar Computer Industry Association. “There are courses at these universities with more than 90 percent women. Don’t get me wrong: it would be terrible the other way around as well. But we need to strike a balance.”

The problem, according to Zaw Htut, are the entry requirements for universities. In Myanmar, women tend to achieve higher marks on matriculation exams, but the government tries to ensure that the most prized courses, such as medicine and engineering, have gender parity, by setting a lower entrance mark for men. Many women end up studying at computer universities because they couldn’t get into their first, second or even third-choice programme.

Ma Cho Zin Wint, 25, agreed this trend came with problems. She is the managing director at Yangon-based software development company Myanmar High Society. Founded in 2014, it has 40 employees; slightly more than half are men. “Most girls end up choosing computer universities without knowing if they even want to work in the IT sector,” she said.

Zaw Htut complained that this meant women graduates, even if they decided to pursue a career in IT after university, were often are not as motivated as their male counterparts. 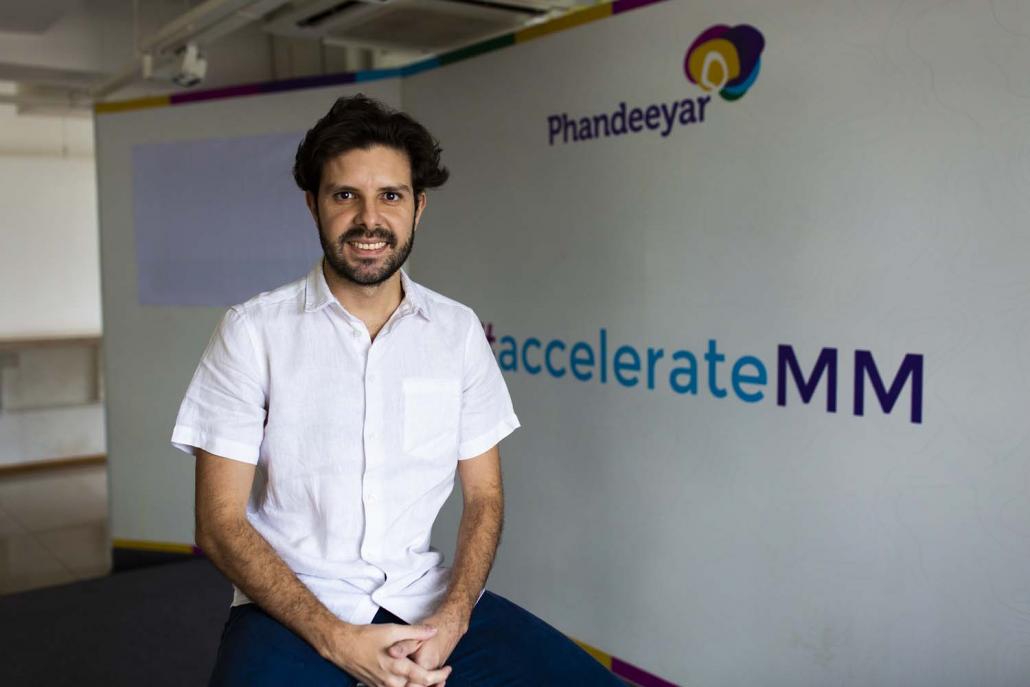 That’s far from the only complaint that tech industry leaders have about Myanmar’s computer universities. A much bigger issue is the course content.

“Like in other parts of the world, universities in Myanmar tend to be too theoretical and do not practically prepare the students for work life enough,” Phandeeyar’s Dutra said. “Many success stories in Myanmar’s tech sector start with these people learning to code by themselves at night after the days at university.”

“Unfortunately, most of the students don’t have the opportunity to gain practical knowledge during their studies,” she said. “When we hire freshly graduated junior developers, they still need months of intensive training.”

For Sauter, it wasn’t hard to find talent – at least at first. But as Axon expands its office, he’s found it increasingly difficult and has turned to a recruitment firm, Myanmar IT Consulting, for help.

Founder Ko Yan Myoe Aung relies on a wide network to access Myanmar’s reservoir of talent. He’s also helping to expand the pool. When he received Frontier at his office tower in Yangon’s Hlaing township on a recent weekday evening, dozens of young adults were sitting at desks in the open plan office. They had just attended one of the company’s classes in PHP, a language used to develop programmes for Facebook, and were ending the day with some exercises on their personal laptops. All fresh graduates from the computer universities, they had paid US$150 for a six-week course, hoping that it would increase their chances of finding a job.

Across Myanmar, there are dozens of companies like Myanmar IT Consulting offering these post-university courses – an indication of the lack of practical skills imparted at Myanmar universities. (Frontier unsuccessfully sought interviews with several computer universities.)

It appears that, while international tech companies are ready to explore the country, its education institutions still have a lot to do in order to meet demand.

“We are in touch with the universities and it appears like our message that they need to adapt is slowly getting across,” Phandeeyar’s Dutra said.

“If they start putting more focus on practical training, foreign investors will notice it. Together with the comparatively high English skills of this young, motivated and cheap workforce, Myanmar’s ICT sector is looking to a bright future.”