Why did Aye Maung win in Ann?

The Arakan National Party leader’s campaign was dominated by a message of Rakhine nationalism and anti-Muslim sentiment, which helped him return to the Pyidaungsu Hluttaw.

His victory came as a surprise to many. His campaign was dominated by a message of Rakhine nationalism, a rhetoric that many observers did not believe would go down well in Ann prior to the vote.

When ANP leaders began scouting their favoured seats ahead of the 2015 general election, there was tension within the party when Aye Maung initially wanted to run for a state parliament seat in Pauktaw Township, Rakhine State. The seat was also being eyed by vice chairman U Khine Pyi Soe, and led to tension among the party leadership.

Eventually, Aye Maung ran for the state parliament seat in Manaung Township, but lost there, and with that his long-held ambition of becoming chief minister for the state.

After that defeat, Aye Maung told Frontier it was because he didn’t campaign enough in Manaung, and that most of the voters living in small villages had never heard of him. He campaigned much harder in Ann; the ANP was the most obvious party during the campaign period, with party posters being seen all around the township.

Most of Aye Maung’s campaign speeches spoke about the history Rakhine State and the threat posed by “Bengali Muslims” in the north of the country, a reference to the Muslim minority who call themselves Rohingya. 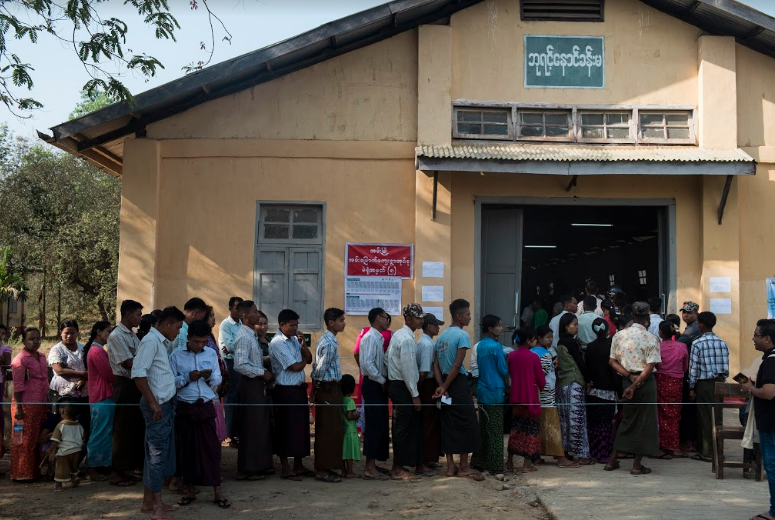 U Zaw Win Myint, the National League for Democracy candidate in Ann, said he was “shocked” by Aye Maung’s campaign strategy.

“I am wondering how many people they used for this, but of course they did what they could to win. Maybe he won the hearts of the people, but I can’t say for sure,” said Zaw Win Myint.

U Zaw Linn Aung, who ran as an independent candidate in Ann on April 1, also questioned Aye Maung’s campaign tactics.

“How could it be possible that Bengali are coming and penetrating Ann Township,” he said of the town, which is located in the centre of the state. “They [the ANP] are putting this ideology to the innocent people in very small villages, who have a lack of knowledge. The Bengali-Muslim problem is a good way for the party to convince people to vote for them.”

Many of the local Rakhine population speak a dialect that is more closely related to Burmese than Rakhine, and many view themselves as “Ann-Rakhine” rather than Rakhine.

Also, business ties in Ann, which is relatively prosperous compared to the rest of the state, are typically closer with Bamar-majority Magway Region, which borders the town to the east.

But the ANP spent much of its time campaigning in small villages away from the main town, as well as in Tat Taung, which is located about 26 miles from downtown Ann.

Frontier was present when the ANP campaigned in Tat Taung on March 29.

“What is Rakhine? Tell me what Rakhine is,” said one speaker who was campaigning on behalf of Aye Maung. “Here I will tell you. Rakhine means someone who is the son or daughter of a Rakhine father and Rakhine mother. So if your mum is not Rakhine, you are not Rakhine anymore.”

“Muslim men can carry four wives but we can’t; their population is increasing day by day,” he said, repeating a line that nationalists have used to heighten fears against Muslim minorities since ethnic tensions spiked nationwide following an outbreak of violence in Rakhine State in 2012.

“And the union level parties [the NLD and Union Solidarity and Development Party] are not interested in this, so we have to solve the problems on our own. That’s the reason you have to vote for Dr Aye Maung, an ethnic Rakhine like you, to solve this problem.”

Most of the 150 people present at the speech responded enthusiastically to the comments. Aye Maung won the seat with 21,794 votes, more than double the amount than the second placed candidate, U Thaung Nyein from the military-linked USDP, which won in the state in the 2010 and 2015 elections.

Hailing from Rathedaung Township, Rakhine State, Aye Maung was the only non-native of Ann competing in the town. His campaign speeches rarely mentioned development, or his plans for the town, instead focusing on the need to protect the Rakhine race, and regularly included words such as “federalism”, “opposition party” and the “2020 election”.

He had previously told Frontier that an ANP victory in Ann would be the “domino effect” for the party to take control of the state parliament after the 2020 election.

“In the 2020 election, we have to form a coalition with other ethnic political parties,” Aye Maung said during his speech at Tat Taung on March 29. “We can’t rely on the union political parties. We trusted them for decades, but it doesn’t work. We don’t have to trust any more. So for the sake of our states, we ethnic minorities have to do it ourselves.”

Aye Maung could not be reached for comment after his victory.