What do the Mon want?

It was just eight months after Burma gained independence from Britain in January 1948 that the Mon took up arms against the Yangon government. They demanded the right to self-determination and their own state. The Mon, along with the Karen and Rakhine, had not been included in the Panglong Agreement, the formula for federalism signed by General Aung San and Shan, Kachin and Chin leaders in 1947. 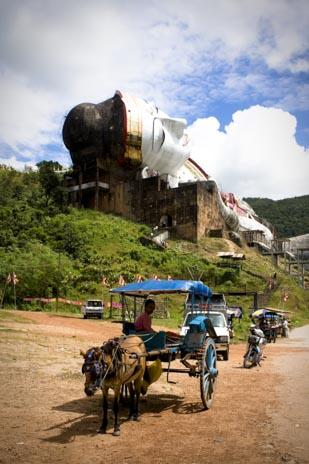 The Mon reached an initial ceasefire agreement with the government in 1958 but many fighters remained underground and continued the armed struggle. The guns did not fall silent until 1995, when the New Mon State Party – formerly the Mon People’s Front – signed a ceasefire agreement with the government. Despite some tensions in the two decades since, the relationship between the two sides has been fairly amicable.

The Mon have decided that negotiation, instead of conflict, is the best approach to achieving their objective: a federal system that gives them a say in key decisions in Mon State. Mon leaders say discussion of the issue has become more open since the change of government in 2011. Yet, despite apparent progress in some areas, distrust of the central government remains.

A semi-autonomous school system run by monks has helped to ensure that the Mon language remains widely used in Mon State, which is bordered by the sea, Bago Region, Kayin State, Thanintharyi Region and Thailand.

The government tolerates but does not provide subsidies for the state’s mother-tongue education system, in which students are integrated into the government curriculum to sit the matriculation examination that is crucial for their careers. The system, which employs about 800 teachers, relies almost entirely on donations.

“The Mon language remains very strong because of the monasteries and schools where it is taught,” said Daw Mi Kun Chan Non. “Now it is widely used throughout the community,” she said. “In the countryside, it would be very difficult to speak with people in Burmese.”

Daw Mi Kun Chan Non, who campaigns for equal opportunity for women and her ethnic group, believes that allowing Mon to be taught in the government system would be a significant move towards improving trust in the national government.

“The main thing we want the government to consider is for them to recognise ethnic languages, but we feel discriminated [against]; we feel they really oppose us and do not support us,” said Daw Mi Kun Chan Non, who added that the Bamar dominate the highest levels of the national government and ignore the concerns of ethnic minorities.

“If you look at those involved in the democracy process, they only talk about human rights and democracy, not ethnic rights,” she said. “We also think these things are important, but we cannot ignore ethnic rights.”

Nai San Hlaing, a central executive committee member of the Mon National Party, formerly the Mon Development Party, also believes that being able to teach Mon in schools is crucial to building trust.

“If we want to talk about a truly federal system, then being able to speak your own language is crucial,” Nai San Hlaing said. “A federal system would include a mother-tongue based, multi-lingual [education] system; then we could have true Mon identity,” he said.

The MNP is the successor of the Mon Nationality Democratic Front, formed to contest the 1990 election in which it won five seats. When the MNDF aligned itself with the National League for Democracy after the election it was forced to disband as a political party by the ruling junta, MNP general secretary Nai Layie Tama told Frontier at the party’s headquarters in the state capital, Mawlamyine.

The party was not reconstituted ahead of the 2010 general election. It was encouraged by the outcome of the 2012 by-elections and returned to the political arena as the Mon Democratic Party, before changing its name to the Mon National Party. The MNP plans to contest 60 seats in the November 8 general election, most of which are in Mon State.

“The government considers this party [to be] a headache,” said Nai Layie Tama, referring to the MNP’s outspoken views on political issues and especially, ethnic rights.

“This government is not fully democratic, so political parties have a responsibility to carry out checks and balances,” he said.

“If the government was truly democratic, then it would have no problems with the parties that criticise them,” he said, adding that the government’s distrust of the MNP makes it difficult for that trust to be reciprocated.

There are two Mon political parties and they are unlikely to merge. Nai Layie Tama said merger talks between the MNP and the All Mon Region Democracy Party have been unsuccessful despite 33 meetings on the issue.

“Each party is practicing according to their own beliefs, but all Mon people know which party wants to be united,” he said, implying that while the MNP is prepared to fight the government for Mon rights, the AMRDP seems more willing to align itself with Nay Pyi Taw. Frontier was unable to contact the AMRDP for comment.

A major objective of the MNP is the establishment of a truly federal system in Myanmar, said Nai Layie Tama.

Representatives of ethnic groups, as well as the NLD and the ruling Union Solidarity and Development Party, all say they believe Myanmar needs a federal system to be united. But what form would it take?

Myanmar comprises seven regions and seven states. Bamar form the majority in the regions and the states are named after their majority ethnic group.

“Federalism means equal rights for all eight major ethnic groups,” Nai Layie Tama, referring to the Bamar, Mon, Shan, Chin, Kachin, Karen, Kayah and Rakhine. “At the moment, the Bamar get seven times the amount of rights as the other seven [major] ethnic groups,” he said. “It should not matter about the size of the population when determining equal rights,” he said, adding that in the United Nations, a small country such as East Timor has the same rights as a big one, such as the United States.

Mon State should have a government chosen by the Mon people, who should also appoint its judiciary, said Nai Layie Tama, adding that any Mon government would need to work in tandem with a Union government.

“The Mon chief minister is selected by the president, not the Mon people,” he said in an interview ahead a recent parliamentary vote that rejected a proposal for ethnic states to choose their own chief ministers. “His interests are not in those of the Mon people, so this system is not equal,” said Nai Layie Tama.