‘We can do it’: Labour development in Rakhine

Villagers in remote, rural Rakhine State are presenting development plans to township authorities, and they are building their own infrastructure after becoming empowered as cash-for-work labourers in Tat Lan activities.

U TIN SAW MYINT says his life changed when Tat Lan came to Kyein Chaung, his village in the delta area of Minbya Township, and invited the community to build a pond.

“I am a motivator! I motivate my community. I say to everyone, ‘If we all agree, we can do it.’ And we do!”

Tat Lan’s social protection principle recognises the needs of the most fragile families, so Tin Saw Myint, a subsistence farmer and father of seven, was chosen by his community to join a cash-for-work (CfW) team of 161 villagers. Their challenge was to build a village pond in six days. A natural enthusiast, this 47-year-old’s ability to mobilise people quickly became apparent. He was encouraged to join the village social committee and when the community gathered in their monastery to elect a new leader for their village development committee (VDC), Tin Saw Myint was elected unanimously.

Tin Saw Myint works with the elected village administrator, U Kyaw Than Chay, to lobby local government officials for funds to develop their community, using their collective voice and evidence of past achievements.

“Based on everything we learned renovating our pond, we applied to the Department of Irrigation for a grant to build a paddy field embankment with our village CfW labourers,” says Tin Saw Myint. They returned home with funding for an embankment and a bridge.

Kyein Chaung has a population of 1,300 people whose average household income is only K75,000 a month. Though many in the community wanted to educate their children beyond primary levels, they could not afford to send their teenagers away to high school. A working party built extra rooms onto their primary school and a deputation went to the Ministry of Education in Minbya town.

The ministry approved their upgrade to a high school, agreed to provide teachers and funded concrete foundations for a new school with four classrooms. Next, the community built a road to nearby Yin Bwe village, so children from there could also attend high school. There were soon 90 students in the school.

The sustainability and long-term resilience of Tat Lan’s 252 communities is bedded in the strength of their village leadership, and their capacity to engage with local government departments and township authorities for their future development. To this end, the Livelihoods and Food Security Trust Fund, LIFT, has invested US$3.1 million in Tat Lan’s community empowerment and governance programmes.

Approximately 2,500 villagers, including 813 women, have formed 230 Village Development Committees (VDCs). The leaders of these committees are elected through a transparent process at a mass meeting to which all villagers are invited. VDCs have representatives from various village livelihood and social groups including school, funeral, youth and women’s committees. Throughout Tat Lan, half the population say they are participating in development planning for their communities.

Zee Cho Maw, in Pauktaw Township, is another example of community empowerment. Village leader U Aung Kyaw Thein says almost everyone in their village helped to fence their pond and build a water filtration system so they could have fresh, clean water. People proudly point to a 335-metre (1,100-foot) concrete walkway funded and built by themselves.

“Everyone contributed K28,000 and each household participated, giving their labour freely,” says Aung Kyaw Thein, who works closely with VDC chairman U Hla Tun Sein. The Zee Cho Maw village development plan includes building another 183 metres (600 feet) of concrete lanes throughout the village, a shelter at the cemetery and a middle school.

“We have an agreement with the Ministry of Education. The village will build the school and the ministry will provide us with the teachers,” says Hla Tun Sein. “Our life is getting better.” 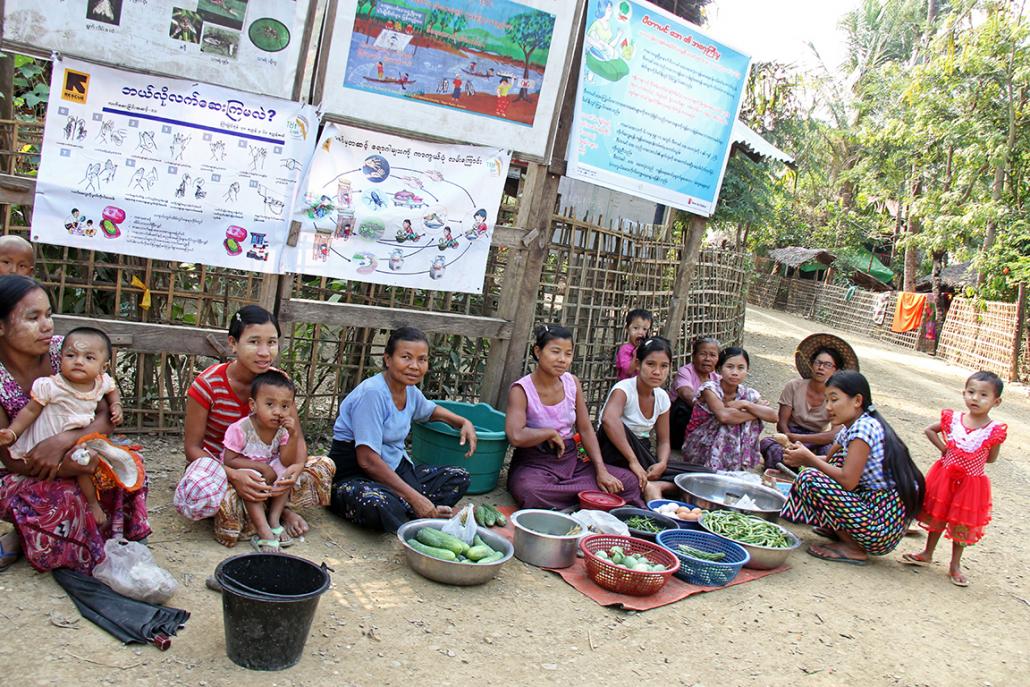 While nutrition, hygiene and agricultural knowledge is improving villagers’ lives it is in cash-for-work projects that communities find collective empowerment, evidence of their abilities, the ability to advocate for their future, and ownership of their village development plans.

Tat Lan’s community mobilisation manager for IRC, U Win Naing Oo, says ownership is one of three critical factors determining the capacity of VDCs to realise the potential of their communities.

“When the community takes ownership for their development they find ways to drive the activities forward, be it building schools, roads, ponds and wells, or embankments and bridges.

Win Naing Oo says an inhibitor of development is the poverty mindset caused by isolation. “Isolation limits community’s exposure to the world and new ideas. Communities living close to the riverbank or located alongside the Minbya to Yangon road see the world differently from isolated communities, because they have access to markets and conversation.

VDC chairman Tin Saw Myint says the road they built to Yin Bwe not only enabled villagers to market their fruit, vegetables, fish and meat, but also to share ideas. These conversations resulted in Kyein Chaung building a medical centre, which is now equipped and staffed with two midwives.

“Our mindset has gradually changed,” says Tin Saw Myint. “All villagers now actively participate to succeed. We have gained lots of achievements.”