The fiercely independent Wa recently granted outsiders a rare glimpse of their thriving enclave on the Chinese border, where they put on a display of confidence and diversity.

“The Wa people are the masters of their own destiny,” said Wa leader General Bao Youxiang in a feisty speech in April, and the accuracy of his proud declaration was evident in the state within a state that he has ruled since 1989.

The speech by the normally reclusive Bao in Panghsang, the capital of the Wa-administered territory on the border with China in northeastern Shan State, on April 17 was a highlight of celebrations marking 30 years of peace and prosperity achieved virtually independently from the Myanmar government.

The Wa had extended rare invitations to outsiders to the celebrations, which included a military and cultural parade and an evening concert. Frontier welcomed the opportunity to visit what the Wa call “Wa State”, but which the Myanmar government calls the Wa Self-Administered Division.

The military parade featured the troops and impressively modern equipment of the United Wa State Army. The largest ethnic armed group in Myanmar, with about 20,000 standing troops and more in reserve, the UWSA is the armed wing of the United Wa State Party. The UWSP signed a preliminary ceasefire with the former ruling junta in May 1989, within weeks of the group’s formation, when Wa rank-and-file members of the Communist Party of Burma mutinied against their ageing Bamar commanders. 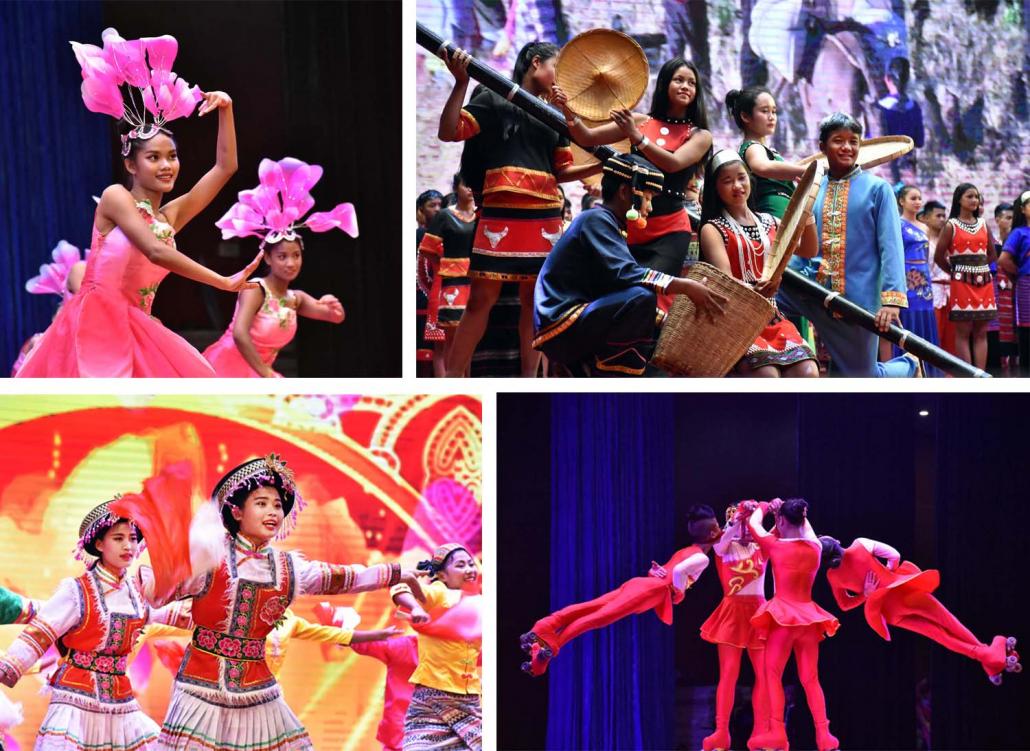 A formal agreement was signed between the Wa and the Tatmadaw’s Vice Senior General Maung Aye and Brigadier General Khin Nyunt on November 9 that year at the North Eastern Command in Lashio, Shan State.

The ceasefire with the Tatmadaw 30 years ago enabled the Wa, who speak an Austroasiatic language and are culturally distinct from their Shan and Chinese neighbours, to focus on developing their isolated, mountainous “state”, and the well-armed UWSA ensured that the region was peaceful.

The Wa region was long notorious for growing opium poppy, from which heroin is made. Today though substitute crops, such as rubber and tea, stretch over hills that formerly bore poppy fields, and mining, notably for tin, has become an important source of income in recent years.

The “Golden Triangle” where the borders of Myanmar, Thailand and Laos meet, which includes territory controlled by the UWSP, has become infamous as a top production centre for dangerously addictive methamphetamines, such as ya ba or its more potent crystal form, known as “ice”, but UWSP officials made no mention of this during Frontier’s visit.

The local economy also gains from cross border tourism from China, whose citizens indulge in gambling and a night time entertainment scene less inhibited than what’s available in the People’s Republic. 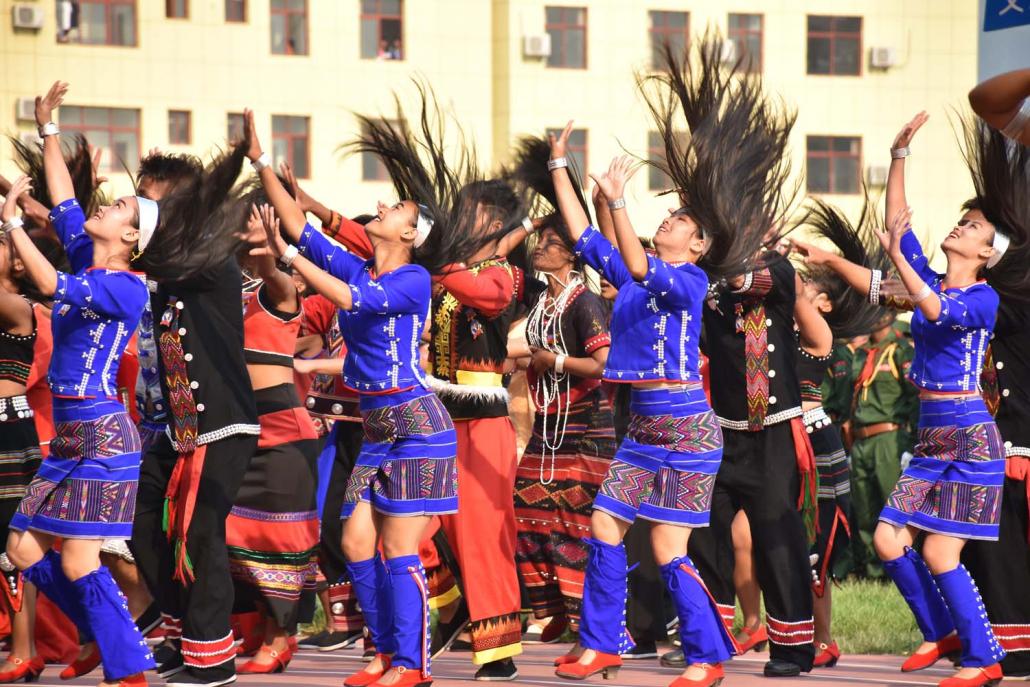 There are indications that the Wa are developing a strong interest in joining the global community, although not necessarily as part of Myanmar. Some Wa residents of Panghsang even said they dreamed of one day becoming an independent country.

Asked about life under the UWSP, a young Wa man said, “In Wa, we have work, income and do not live in fear of attack by the Burmese army. In Myanmar, they have democracy. Are they happy?” He then laughed and walked away.

A middle-aged Wa man said he hoped to be able to send his children abroad for university.

A Muslim shopkeeper who had previously lived in Yangon said he lived without fear among the Wa. “We are treated as equal and welcomed as part of Wa society,” he told Frontier. “We could not have such a life within Myanmar.”

A breathtakingly spectacular concert, lasting several hours, on the eve of the anniversary parade featured performances by Wa youth that presented an image of a strongly multicultural and confident society. 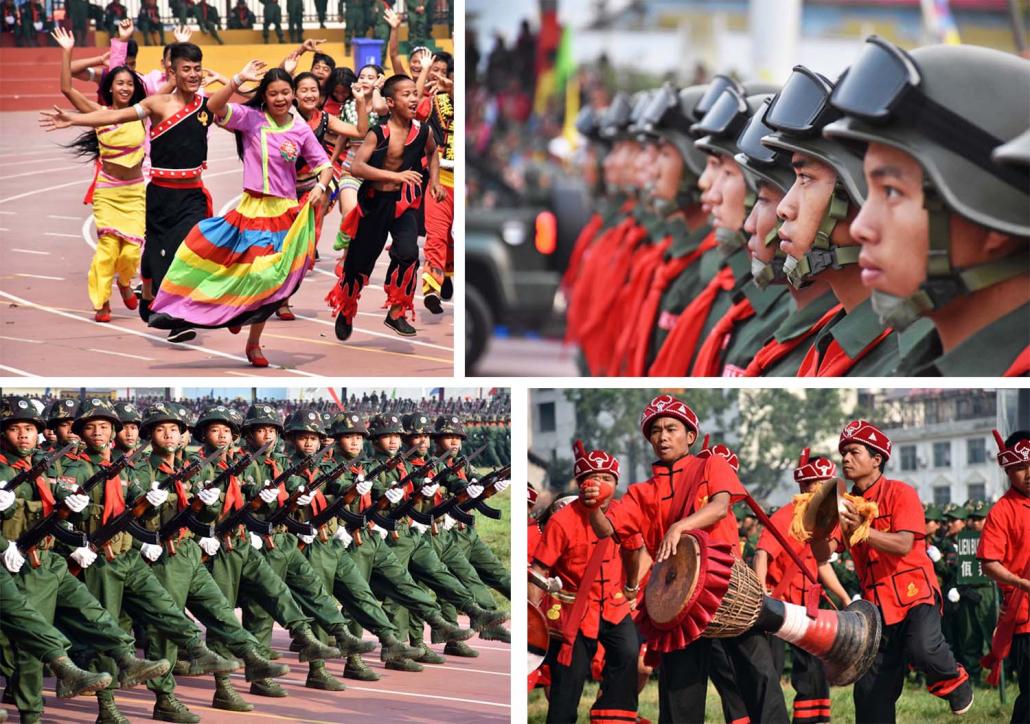 On a stage backlit by a gigantic video screen, UWSA troops transformed martial drills into dance moves that were reminiscent of the propaganda produced in the early years of communist Russia and later in revolutionary China. School-aged children impressed the audience with Olympic-standard gymnastic routines and young men and women performed songs and dances that highlighted everyday aspects of Wa life and culture.

Evocative of communist tradition, many of the performances focused on the contribution and importance to Wa society of its smallholder farmers. Most of the UWSP leadership served before 1989 in the Communist Party of Burma, which was backed by communist China. Political and social organisation in the territory has a decidedly Maoist imprint.

It is difficult to assess the overall situation in the Wa territory on a short visit, but there is no doubt that the Wa, having secured autonomy from Nay Pyi Taw, are looking to the future with a strong sense of optimism.