Residents displaced by the controversial hydropower project hope to one day return home, but fear that even if it is cancelled, they may not be able to do so.

MORE THAN five years after it was suspended by the U Thein Sein administration, villagers displaced by the controversial Myitsone Dam project are urging the government to prevent it from going ahead.

On March 14, to commemorate the International Day of Action for Rivers 2017, a protest of 300 people was held at the Myitsone confluence, where the Mali and N’Mai rivers join to form the Ayeyarwady River.

The proposed site for Myitsone is a few miles downstream from the confluence, which will be flooded if the project goes ahead, and about 30 miles (48 kilometres) north of Myitkyina, the Kachin State capital.

Construction began on the dam in December 2009, but was halted in September 2011 by Thein Sein for the duration of his term in office, which ended when the National League for Democracy came to power in March 2016.

The resumption of fighting close to the dam site had made construction more difficult for companies involved in its development, including China’s State Power Investment Corporation, which holds an 80 percent stake in the project. Those difficulties were heightened after bridges on the two main routes to the dam from China were destroyed in the fighting.

A year since the NLD came to power, it is still not clear whether the project will go ahead. In August 2016, President U Htin Kyaw formed a commission to evaluate all proposed hydropower projects on the Ayeyarwady River, but its recommendations for Myitsone have not yet been made public.

Recently SPIC has been publicly calling for the Myitsone project to be restarted, and has tried to repudiate criticisms.

The Mali and N’Mai rivers are of great cultural and historical significance to the Kachin people, but CPI has claimed that the myth has been “utilised for opposing the construction” of the dam.

On its website Upstream Ayeyarwady Confluence Basin Hydropower Co Ltd, SPIC’s subsidiary in Myanmar, re-published an article from China government mouthpiece Global Times claiming that the story about the rivers’ importance in Kachin legend was a myth “fabricated” in a 2007 report by the NGO Kachin Development Network Group.

While it is true that KDNG released a report referencing the importance of the rivers, basic research disproves the rest of that claim.

Swedish-American missionary Mr Ola Hanson moved to Kachin State in 1890, devised a writing system for the Kachin language and then translated the Bible into that language. After living in the region for more than 20 years, in 1913 he published his book The Kachins, one of the first anthropological studies of the Kachin people.

He wrote of four “great rivers” mentioned in the traditions for Kachin people: the mali hka, the kaw, the n’mai hka and the golden lu.

On its website, under the section “Myths about Myitsone Dam”, UACHC said it is untrue that “communities affected by the construction of hydropower projects are suffering”.

“All homes there are two-storey brick and timber houses, offering far more space and comfort than the residents had previously enjoyed,” the website says, adding that villagers have also been provided with free round-the-clock electricity, as well as televisions, water supply and “free rice with which to cook”.

But villagers who have been displaced by Myitsone say that life has been more difficult since they were relocated.

Marip Lura was one of those displaced. In 2012 her family of seven was forced to move from the village of Tang Hpre, on the banks of the Ayeyarwady River, to the model village of Aung Myin Thar.

Once there it quickly became apparent that life would be more difficult, she told Frontier. The new houses looked nice from the outside but were poorly made and needed frequent repairs from villagers just to remain habitable.

With less land on which to grow their products, it was also more difficult to make a living at Aung Myin Thar, she said.

“On our farm [in Tang Hpre] we had paddy fields; we also cultivated in the mountain. We grew rice, corn and other vegetables.”

But in Aung Myin Thar the family struggled to grow enough produce for their own needs, let alone a surplus to sell.

“We tried to farm for one year at the new relocation camp but the soil was so bad we grew a lot less … because there were lots of rocks and stones. It’s a problem for all the villagers,” she said. 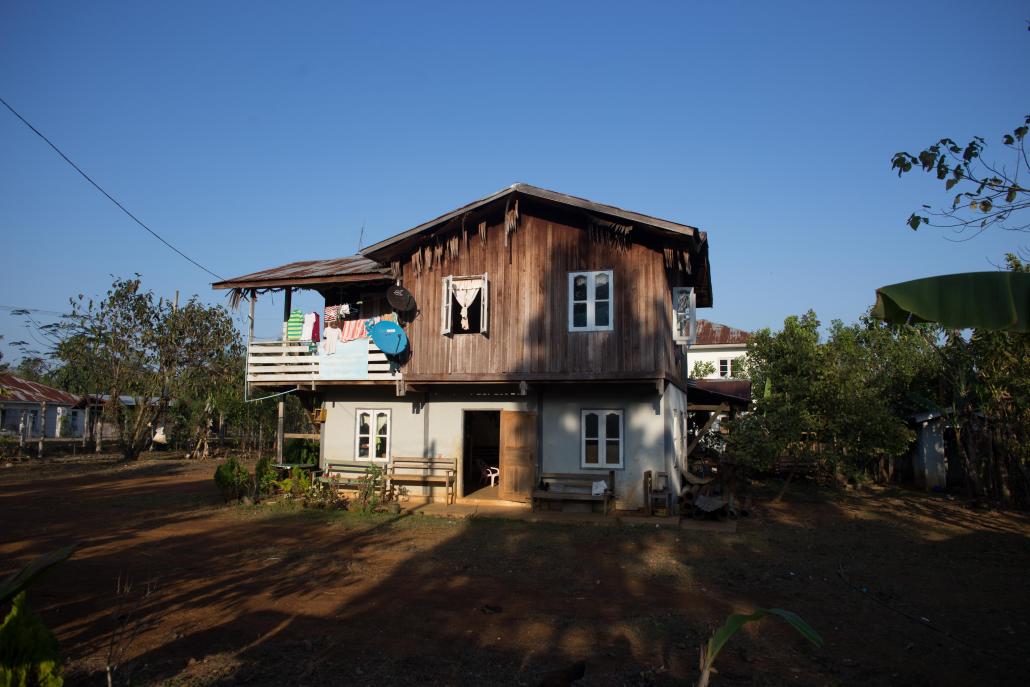 An example of one of the homes provided to villagers who have been displaced by the Myitsone project. (Mark Inkey | Frontier)

In 2013, Marip Lura and her husband defied the authorities and returned to Tang Hpre. They were fortunate that their land was unoccupied and began growing again. But those displaced from other villages have not been so lucky; some villages have been destroyed completely, to make way for dam infrastructure or accommodation for workers.

With four of their children remaining in Aung Myint Thar to attend school, Marip Lura, her husband and their youngest son first lived in a small shack built next to their plot of farmland in Tang Hpre. They replanted crops on the land and were soon able to grow enough to support themselves. They also have enough crops leftover that they can sell in order to make an income.

Optimistically, they have started to plant trees to benefit future generations of villagers they hope will eventually be able to return. Last year, the family even rebuilt their house, where the three of them now live.

About eight families have returned to Tang Hpre, but more than 300 remain in Aung Myint Thar, said Marip Lura.

Initially the police came to Tang Hpre to tell Marip Lura and her family to return to the model village, but they refused.

They eventually signed an agreement with the police, which allowed them to remain in Tang Hpre, provided they move when the village is flooded from the project construction.

But the police returned in 2015, asking the villagers to sign a new agreement that said they would move either when the area was flooded or, in the event that the dam not be built, when they were ordered to do so. The villagers refused, citing the earlier agreement they had signed.

Tsa Ji, general secretary of KDNG, suspects he knows the reason for the police’s new request.

Tsa Ji told Frontier that soon after the villagers had left Tang Hpre, the title deeds for all of the land were taken over by an organisation called Sea Sun Star Company, and possibly other companies. Sea Sun Star is owned by Kachin businessman U Hka Mai Tang, who before the 2015 general election was a Union Solidarity and Development Party MP in the Pyithu Hluttaw for Sumbrapum Township, Kachin State.

A 2013 report by rights group Mungchying Rawt Ja entitled Model Villages Are Not a Model made the same claim.

Frontier was unable to reach Sea Sun Star for comment.

Tsa Ji said he had heard rumours that if the dam was not being built, the area near the river would become a hotel zone on which Sea Sun Star and other companies would build hotels and ecotourism lodges.

Despite concerns about the future of the land that they used to live on, Marip Lura said she is confident that one day life will return to normal.

“I hope the dam is cancelled and that we can stay in the village. [I hope] that there are no dams and we have good livelihoods. I hope and think that we will stop the dam.”

TOP PHOTO: Local villagers protest against the Myitsone Dam on March 14, to commemorate the International Day of Action for Rivers 2017. (Mark Inkey | Frontier)