British development agency DFID has suspended funding for a timber industry reform project because of the Rakhine crisis.

BRITAIN HAS cited the crisis over Rakhine State for a decision to suspend funding for Myanmar’s effort to join a European Union initiative aimed at combatting illegal logging and promoting effective forest governance.

Myanmar has been preparing to sign the EU’s Forest Law Enforcement, Governance and Trade – Voluntary Partnership Agreement since early 2015.

The EU adopted the FLEGT Action Plan in 2003 and two years later introduced the voluntary partnership agreements, under which the European Commission is empowered to negotiate bilateral trade deals with timber exporting countries.

Myanmar’s preparations to sign a FLEGT-VPA were funded by the British government through its Department for International Development (DFID), said U Khin Maung Kyi, deputy general manager for extraction at state-owned Myanma Timber Enterprise.

He said the purpose was to establish strong foundations on which Myanmar and the EU could negotiate a VPA. Myanmar wanted to sign a VPA to facilitate timber exports to the EU, improve forest governance and fight illegal logging, he said.

The process though is now in limbo because of the Rakhine crisis.

“In August, we were informed via email that DFID will stop funding for it by the end of November,” he told Frontier in early October. “It is clearly stated (in the letter) that the Rakhine situation is the main reason.

“Sadly, I am sure it is not a win-win-win situation,” he said. “But it’s a political issue, so it’s out of our hands.”

The DFID press office confirmed the suspension to Frontier. It said in a statement that the crisis in Rakhine State had prompted a change of priorities in Myanmar that would see it target “those who are persistently left out of economic and social development”.

DFID-supported activities related to the VPA will be “postponed until further notice”, it said. The department has also requested the FLEGT Secretariat not to make any further fund disbursements until it is clear what activities may still be carried out.

“If they’re serious about it, so are we,” he said, suggesting that funding could potentially be sourced from another country. However, he noted that preparations had been difficult, because the scheme entails “control over the entire supply chain” in Myanmar, and “a lot of the timber is being harvested in areas where the government doesn’t have access”.

Fallout from the crisis in Rakhine – including the exodus of more than 700,000 Rohingya Muslims to Bangladesh amid accusations that the security forces committed “crimes against humanity” – has hurt the national economy, especially foreign investment and tourism.

The direct impact on the timber industry has been relatively small, but timber trader U Bar Bar Cho, who is also secretary of the Myanmar Forest Certification Committee, said that failing to sign a VPA would be damaging over the long term.

In 2013, the EU lifted an import ban on timber from Myanmar in response to reforms initiated by the Union Solidarity and Development Party government headed by President U Thein Sein.

The lifting of the import ban in 2013 coincided with the introduction of the European Union Timber Regulation, which bans the sale of illegal or high-risk wood in EU markets.

The EUTR requires importers to perform the due diligence necessary to ensure that their risk of importing illegally logged timber is negligible.

“Traders are now worried to export teak to EU markets because importers there are demanding more and more documents, and their demands are changing from time to time,” said Bar Bar Cho.

Traders have good reason to be concerned.

In November 2016, a Swedish administrative court upheld a ruling that a trading company had imported teak from Myanmar in violation of the EUTR.

An investigation by the Swedish forest agency had found that the company could not demonstrate who harvested the teak or where it was felled before the company bought the timber from Myanma Timber Enterprise.

In October last year, the Netherlands became the sixth EU country to act on the illegal sale of Myanmar teak when the Dutch Food and Product Safety Authority (NVWA) found that a timber importer had breached the EUTR.

In a statement on the Netherlands ruling, London-based watchdog group Environmental Investigation Agency welcomed reform steps taken by the Myanmar Forest Department and the MTE, but said a greater effort was needed in Myanmar to produce timber that complied with the EUTR.

The MTE’s Khin Maung Kyi insisted that existing systems for tracing timber from forest to export enable the supply chain to be monitored and controlled.

“The legal sale documents provided by the MTE enable the legality of timber sold at open tender to be easily traced,” he said. “We can guarantee that teak or timber harvested and sold by MTE is legal, but we are not taking responsibility if other timber is mixed with consignments during transport.”

Khin Maung Kyi said that in the Swedish administrative court’s ruling in 2016 and in a similar case in Denmark last year, the MTE had been ready to provide the necessary documents to prove the legality of the timber. “But no one asked for it,” he said. 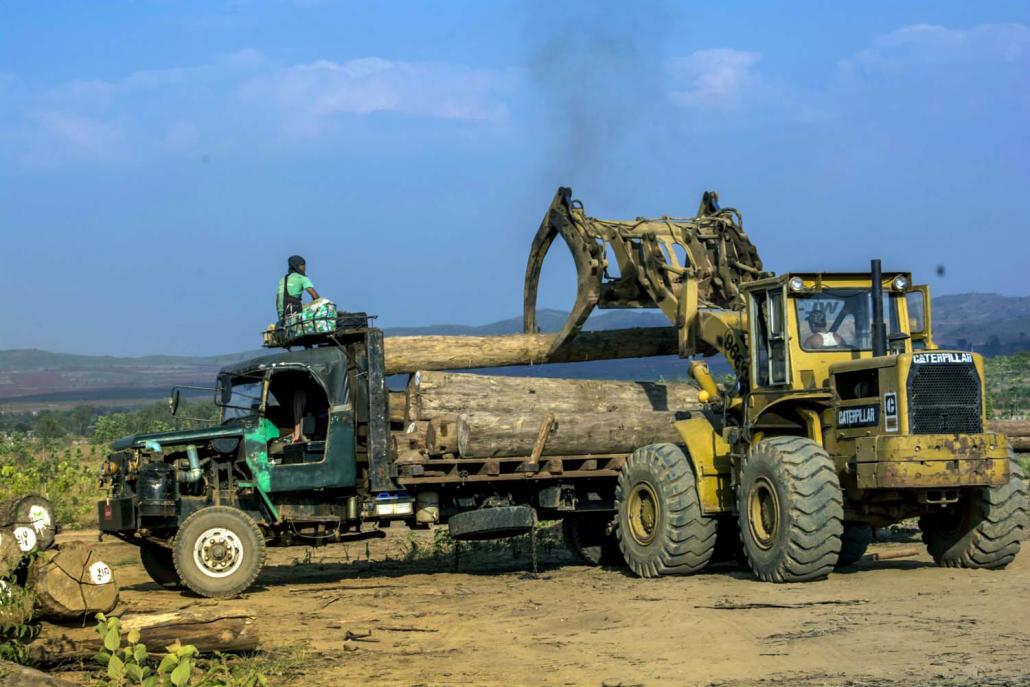 Timber logs are loaded on to a truck near Loikaw in Kayah State in mid-2016. (Maro Verli | Frontier)

The timber industry had lobbied for the creation of a third-party body to replace the MTE, which had been accused of damaging the export market by failing to comply with international standards for transparency and accountability.

He added that MFCC formally launched its third party timber certification system in early August, and the objective was robust checks to ensure wider acceptance on the international market.

“We are hoping this will make a critical contribution to meeting EU due diligence requirements,” Bar Bar Cho said.

Central Magway Region is one of the major logging areas in Myanmar and has seen large-scale deforestation due to over-extraction and illegal logging.

Magway Region Minister for Natural Resources, Environmental Conservation, Electricity and Energy U Myint Zaw said that illegal logging was thriving in the region when the NLD took office but loggers took a “wait-and-see” approach during the first six months of the government’s term.

Later in 2016, illegal logging began to take off again, prompting the government to act.

“They [illegal loggers] probably thought that we weren’t different from the previous governments but we’ve shown them,” he told Frontier in September. “We made it very clear that we will not tolerate illegal logging at all. Our forests are in need of urgent protection.”

In 2017, Myint Zaw led a task force of around 150 officials, including some 100 police, that cracked down on a gang of illegal loggers and arrested around 200 people in Magway’s Thayet District.

The gang had been working together with civil servants and Myint Zaw avoided notifying local police and forestry authorities of the crackdown so that the loggers were not tipped off. Although a gang leader escaped the raid, he was arrested in December and sentenced to 10 years’ imprisonment.

Regional authorities have also seized at least 2,600 tonnes of timber in 1,422 registered cases of illegal logging in Magway Region since April 1, 2017, when a moratorium on logging ended.

For his efforts, Myint Zaw has a reputation as being one of the most proactive members of the government in terms of fighting illegal logging. He said it has also made him a target.

“One gang leader sent a message to me from prison: ‘You will not be in your position forever. Let’s see what happens when you are an ordinary citizen,’” Myint Zaw said. “Honestly, we are still struggling to eliminate illegal logging because there are still corrupt officials involved.”

MTE has a monopoly on the harvest and sale of timber to traders and exporters – a lucrative business that has brought in billions of dollars in revenue over the years.

But its strategies have been controversial. Some experts say most deforestation is not caused by individual loggers, but by logging companies that are approved by MTE. Under the military regime, some of the country’s leading businesspeople were granted lucrative timber concessions that generated huge profits.

Timber production also often exceeded what’s known as the Annual Allowable Cut – the amount of timber that can be sustainably harvested each year.

“What MTE did in the past was in accordance with the previous government’s policy. We did nothing unlawful. We just followed orders,” he claimed during an interview at MTE headquarters in Yangon in September. “Under the military government, MTE had to meet the revenue target that the cabinet set.”

Since 2014-15, production has been well below the AAC, Khin Maung Kyi said, and this financial year it expects to harvest just 35 percent of the maximum allowed.

Over the longer term, MTE plans to build up its timber plantations and is hoping to corporatise before the end of the NLD government’s term.

“The new name will be Myanmar Forestry Enterprise,” said U Khin Maung Kyi. “In 10 or 15 years, MTE will not produce timber from the natural forest.”