Time for Myanmar's economic ‘take off’?

Higher economic growth is forecast for the year ahead and the government appears confident that it can deliver real benefits, but rural and urban residents are not so sure.

MUCH HAS been made in recent weeks about the progress – or not – of the National League for Democracy government during its first year in office.

Economic management is seen as a weak point of the government. It has been slow to explain its policies and priorities, and is yet to really articulate an economic vision for the country. The pace of reform has been sluggish. Businesses struggle with many of the same old challenges: power cuts, corruption, red tape. All this has undoubtedly left some frustrated.

But is the criticism fair? First, we need to consider the state of the economy, how it has changed over the past year and where the experts think it is headed.

Whether coincidence or not, governments in Myanmar take office on or around April 1, the start of the fiscal year. This makes it easier to analyse their performance.

On April 6, the Asian Development Bank issued its findings for 2016-17, which took in the first year of the NLD government, and also gave projections for the coming 12 months.

This data paints a mixed picture. Gross domestic product slowed nearly one percentage point, from 7.3 percent in 2015-16 to 6.4 percent. Growth fell in all three economic sectors – agriculture, services and industry – which the ADB attributed to the after-effects of flooding in 2015 and low international commodity prices. The decision to halt high-rise construction in Yangon is also thought to have had an impact.

Growth in services fell from 9.1 percent to 7.6 percent, while agriculture declined from 3.4 percent to 2.5 percent and industry 8.7 percent to 8.2 percent.

So the data suggests that the NLD has presided over a slowing economy, although the extent to which it is responsible for that sluggish growth is debatable.

Approved foreign direct investment also got off to a slow start under the current government, declining 28 percent in the first nine months of the 2016-17 fiscal year, the ADB said.

Full-year figures from the Directorate of Investment and Company Administration show investment fell about 30 percent to US$6.64 billion, down from $9.48 billion and the first decline in four years.

However, Myanmar Investment Commission secretary U Aung Naing Oo recently told reporters that the total for 2016-17 was still above the government’s target of $6 billion.

It’s also important to distinguish contracted foreign investment from actual inflows, and the Nikkei Asian Review reported recently that DICA figures showed there had been no slowdown in this regard during the first nine months of the NLD government. The IMF is forecasting a very modest 7 percent drop in actual FDI in 2016-17 but expects a record high this year, NAR reported.

One area where the NLD government has clearly achieved success is in tackling inflation, which peaked at 16.2 percent in October 2015 and contributed to the depreciation of the currency.

The previous government’s profligacy in its final year, when it doled out a K3 trillion pay increase to civil servants prior to the election, hamstrung the incoming administration by leaving it with both high inflation and a hefty budget deficit.

By the time the NLD took office, inflation had moderated to 11.2 percent and dropped further over the next 12 months to 6.5 percent, the ADB said, citing Central Statistical Organization figures.

‘Life is as tough as ever’

The problem for the NLD is that life hasn’t felt better or easier for the vast majority of people. Daw Soe Soe Thin, who cultivates 10 acres of paddy in Taikkyi, in northern Yangon Region, said life was as tough as ever for farmers.

“We have got access to more loans from the government than in previous years – K50,000 an acre more than under U Thein Sein,” she said. “But then the paddy price is down this year by around K30,000 per 100 baskets.”

She said farmers wanted the government to put in place controls to guarantee a reasonable price for paddy.

She added, “I don’t have much hope that conditions for farmers like me will improve in the coming one or two years.” 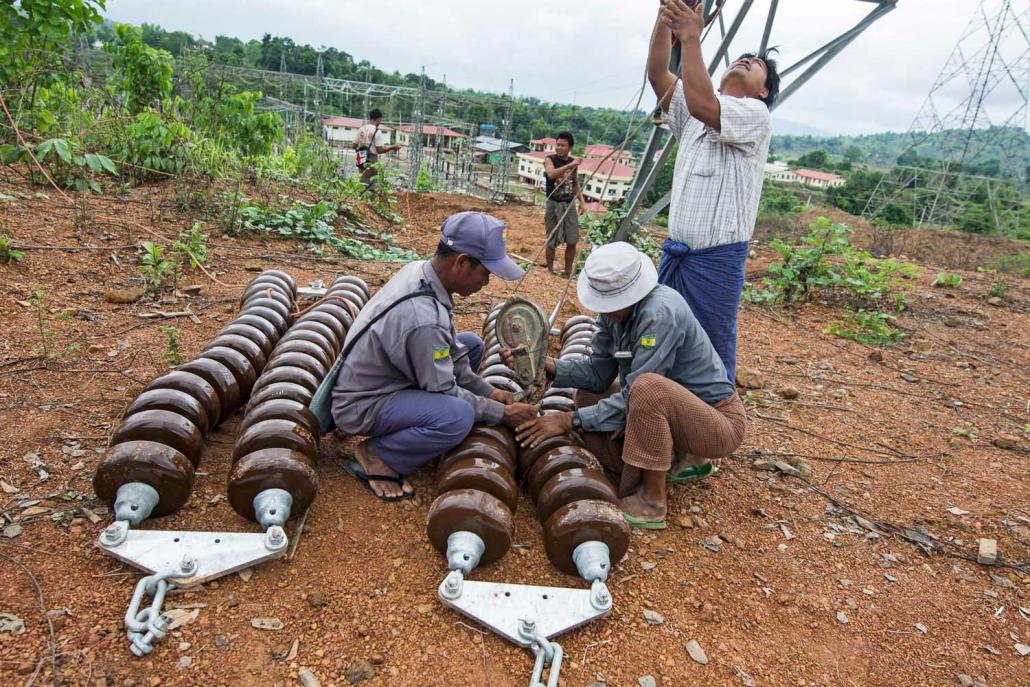 But the sentiment in urban areas appears no more positive. Writer Zayya Sopyay, 32, said salaries were stagnant while commodity prices were increasing.

“This is bad for ordinary people,” he said. “They said that Myanmar will catch up to Singapore in the coming years. I don’t think this is right; it’s just lip service. I have a question: Can they even raise Myanmar up to reach the level of the early years of the U Ne Win era?

“I want to say to the government: Please, don’t do the things just to earn applause. Do real economic development. I think they are still overconfident but it is time to listen to the voices of the people and experts and implement pragmatic changes.

“I don’t think GDP will grow in the coming two years as much as the ADB predicts because of issues like poor infrastructures and lack of exports. I think our country will only really develop after the coming three or four years.”

Time for take off?

But the government is confident it can deliver in the next 12 months. U Tun Tun Naing, the permanent secretary of the Ministry of Planning and Finance, said 2017-18 has been designated as a year for economic “take off”.

“I mean like the pilot starting to increase the engine speed of an aeroplane to take off. We will do everything we can to boost the economy,” he said.

He declined to give specifics, but said broadly the government would invest in infrastructure and introduce measures to boost exports and the development of small and medium enterprises. It will also make long-term investments in health and education through the budget, he said.

Do the experts agree the economy is about to take flight? Not exactly, although the situation appears to be improving.

The ADB expects GDP growth will rise to 7.7 percent in 2017-18 before hitting 8 percent the following year. The agriculture sector, which provides income for the largest single group of people, should expand at 3 percent, assuming normal weather conditions. Industry and services are both expected to grow strongly.

The ADB said telecommunications should give a further boost to the services sector, while the industry sector is forecast to hit 10 percent growth this year and the next.

However, the current account deficit is still expected to widen in both 2017-18 and 2018-19 on the back of slow growth of exports and the high value of imports.

The current account deficit is a measure of transactions into and out of the country for goods, services, investment income and more. Encouraging foreign investment – particularly actual flows of money – will help to balance money leaving the country.

The good news for the government is that the new investment law, which came into effect on April 1, should attract more foreign investment if implemented effectively, according to the ADB. Meanwhile, a new companies law is expected later in 2017 and will help to improve the operating and governance framework for both local and foreign investors.

While the NLD government has managed to contain inflation, the ADB has forecast a slight rise to 7 percent this year and 7.5 percent the next.

But the government is expected to continue its current fiscal conservatism. With revenue flat due to falling income from exports, it proposed a relatively restrained budget for 2017-18, keeping the deficit around K4 trillion, or 4.5 percent of GDP.

According to the ADB, “the government plans to contain the fiscal deficits to 3 to 4 percent of GDP this year and next year by strengthening revenue collection and enhancing expenditure efficiency”.

In short, that means the government plans to collect more taxes and ensure money is spent properly.

The private sector is “the key” to Myanmar maintaining economic growth in the years ahead, Ms Yumiko Tamura, officer-in-charge of ADB Myanmar, told reporters.

Unfortunately, the government is often more of a hindrance than a help to companies.

Although the new company and investment laws were positive steps, the ADB noted that “Myanmar still lacks a credible and consolidated legal and regulatory framework to support the emergence of a vibrant private sector”.

As Ko Yan Paing Oo, a program officer at the ADB’s Myanmar office, noted, “A lot of regulations are passed but enforcement still remain very weak.”

The legal and regulatory framework is complex and fragmented, with multiple layers of laws, regulations and procedures. Some of these overlap, and many are either outdated or inconsistent, Yan Paing Oo said. 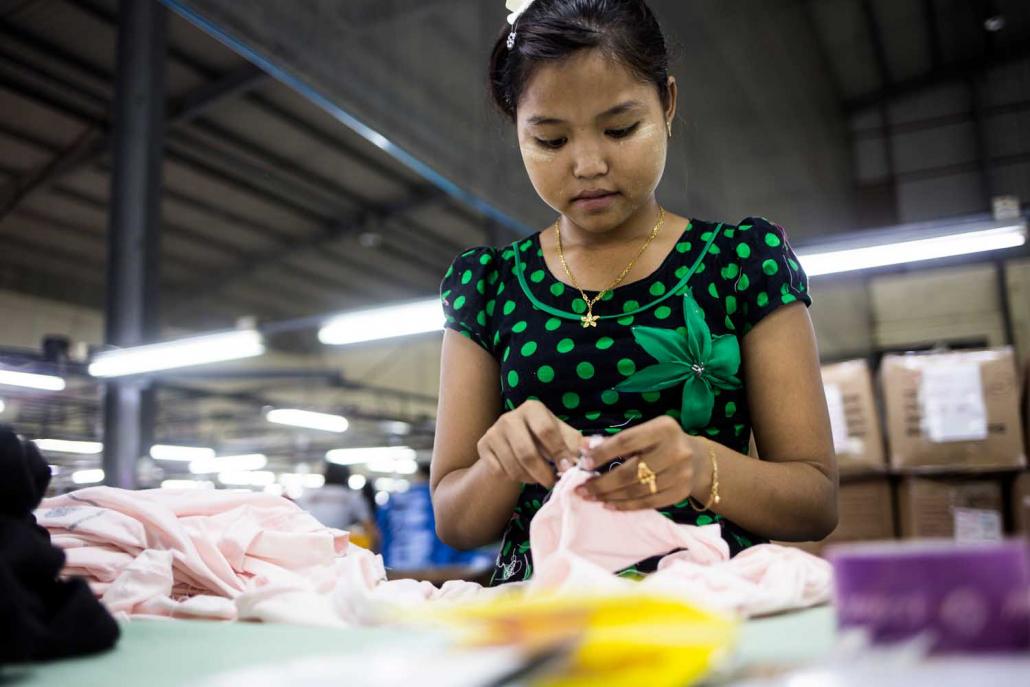 The NLD government has been criticised by some for its failure to consult when drafting laws, regulations and policies. They are often being drafted by a single ministry, with even other government officials left in the dark about the contents.

The ADB urged the government to ensure the consultation process for laws and regulations involves all stakeholders, rather than a single ministry alone.

Yan Paing Oo recommended that laws be developed “in a clear, consistent and coordinated manner”, and that they be accompanied by proper implementation and uniform enforcement.

Dr Soe Tun, a member of the board of directors of Myanmar Agribusiness Public Corporation (MAPCO), said he expected strong economic growth this year but continued depreciation of the currency because of the trade deficit.

He said he wanted the NLD administration to focus on reaching government-to-government agreements to boost exports, as these had significant benefits for the economy.

“I understand that the first year is for cabinet members and the government to get used to the job,” he said. “But for this year and coming years, they need to do more G-to-G business agreements. If they don’t, exporters will struggle and the trade deficit and current account deficit will widen.”