After years of growth, Yangon’s nightlife industry is flagging under old laws and a crowded market.

IT IS the final night at Mojo restaurant and lounge. Only one table is left standing amid the stacked furniture and taped-up boxes, and the staff are having a last supper.

There are drinks, food, speeches in English and Burmese, and more than a few tears. Owner Mr Jean Curci is misty-eyed but commands his soon-to-be-former employees not to cry. Per Buddhist tradition, the employees drop to their knees to pay respect to Curci and then to their managers, thanking them for their teaching and begging atonement for their sins.

“I forgive you every time you got the wrong dish or forgot the spoon with the coffee,” Curci tells them. “You have done a great job. You are young. You are beautiful. You will be successful. Go with it.”

A French entrepreneur who is also a partner in the Yangoods merchandise company, Curci says he didn’t close Mojo because it was a bad restaurant or lacked potential. It’s just that earnings over the last two years have never lived up to its early days, when TripAdvisor featured relatively few Western-style bars and the drinking curfew laws were rarely enforced.

Now the once-bubbly nightlife scene seems to be going flat. It has been a disappointing year for both tourism and foreign investment; meanwhile, the bar and restaurant industry is saturated with newcomers and limping under strict curfew and licensing laws. Although newcomers continue to try their hand, long-time staples are up for sale or simply closing for good.

The end of the bar rush

As director of food and beverage operations at Pun + Projects, Mr Andre Lense has opened several bars and restaurants in Yangon in recent years, including Port Autonomy, Asian bistro Rau Ram and, most recently, Rice & Ice.

He spoke with Frontier from one of Yangon’s oldest and best-known expat watering holes: 50th Street Bar. Admiring the cast iron beams and colonial-era brickwork, Lense told of the building’s history as a British treasury house and the loyal regulars who have drunk beer and shot pool since the era of the military dictatorship, when Than Shwe ruled with an iron fist.

“This is an institution. An icon,” he said. “They will not close down an icon.”

(Lense declined to comment on reports that Pun + Projects is in negotiations to purchase 50th Street.) 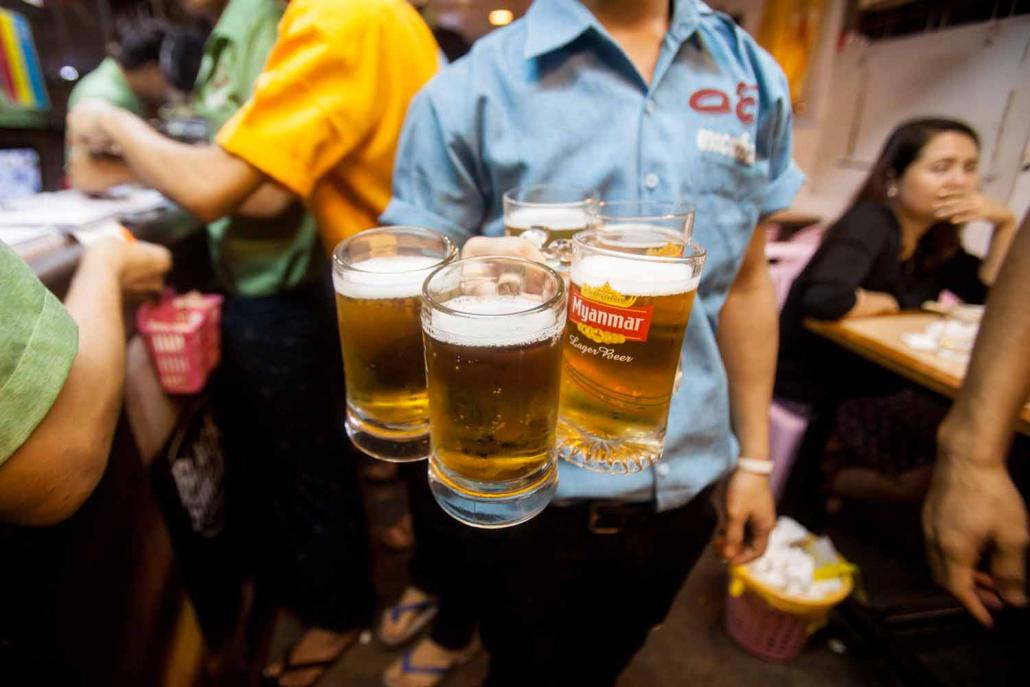 The bar does at least seem to still be profitable, but it is the exception in Yangon. During research for this article, Frontier was told that several other mainstays have been put up for sale, with little success so far in finding a buyer.

Although some newcomers, such as Penthouse in Myaynigone, have found a niche, many have fared far worse. Online news and lifestyle site Coconuts Yangon called Hummingbird bar “too good to be true” when it opened in March 2015.

One year later its Facebook page announced it was “closed for renovations … until further notice.” That was six months ago. (The Coconuts article was somewhat prophetic: “When a bar in Yangon seems too good to be true,” it noted, “it usually is.”)

So why do good bars disappear with such unnerving frequency? Many have a demographic and market problem, Lense said.

On one hand, standards for bars are improving, he explained. Young people working in restaurants and hotels in places like Singapore and Malaysia are beginning to seek opportunities back home, their skills and experience with them.

On the other hand, just because they have the experience to acquit themselves well in a Western-style bar, doesn’t mean they can afford to drink cocktails there after work. The Myanmar middle class youth that fill up tables at The Lab or Vista Bar is growing, but more slowly than expected.

Meanwhile, Myanmar’s upper class tend to entertain and mingle at upscale hotels, and the mass, the working class, prefer their local beer stations. The market still rests on the expat community, and there are only so many expats to go around.

“Everyone is in the same boat,” Lense said. “We are fighting over the same 500 people that actually spend money in these establishments.”

Beer by the book

The paucity of customers is not the only headache, though. The government also rarely issues new beer and liquor licenses; since 2011-12 the number of licences in circulation has dropped slightly, with the government apparently keen to show it is taking steps to respond to concerns about alcohol abuse. Official figures show there were 41,040 licences across 30 categories in circulation in 2015-16.

That means startup bars must acquire a licence from an existing licence holder within the same township. Licences in the most lucrative townships can go for K15 million (US$11,300) or more on the black market. Each type of alcohol – bottled beer, draught beer, local spirits, imported spirits – also requires a different licence.

One owner of a bar on 19th Street, in Yangon’s Chinatown area, told Frontier on condition of anonymity she doesn’t know how much her liquor license would fetch, and she doesn’t really care. Her father acquired it more than 15 years ago and it hangs behind the counter of the one-room establishment, still bearing his picture.

She has a licence to serve bottled beer and another to serve draught beer, but not one for hard liquor. That doesn’t stop her from selling cocktails to foreign backpackers at K800, though.

“The police know us and they never say anything about it,” she said. “I don’t know if the other bars on this street have licences or not, but I think they have their own arrangements.” 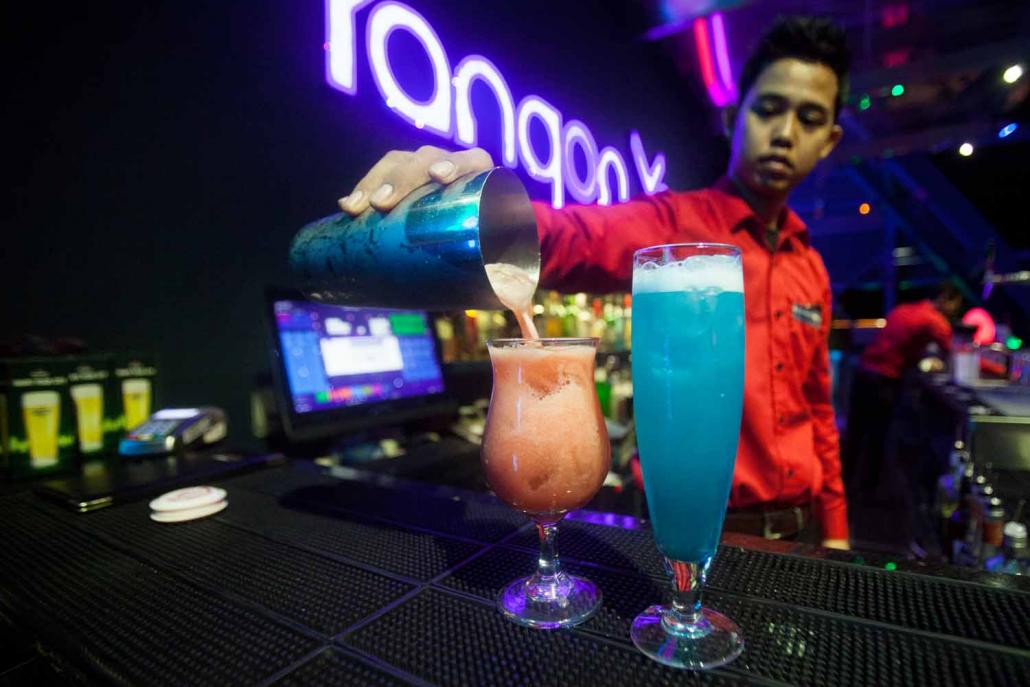 She doesn’t see it as a corrupt system. There are no bribes involved, she claimed. The authorities simply want to know who you are and trust that you won’t cause trouble. They certainly won’t hold you to the letter of the law.

The General Administration Department put this system to the test in July when it tried to crack down on bars serving draught beer without a licence. Around 4500 businesses were illegally selling draught beer, according to a Myanmar Times report, and city authorities have since curtailed their efforts following public outcry.

But while this semi-formal system is enough for locally owned bars on 19th Street, it is a different story for foreign entrants.

These usually have relatively little rapport with local authorities and tend to be monitored more closely by police, partly from a stated purpose to protect Yangon’s expats. (In 2015, the police began enforcing a longstanding but widely ignored 11pm curfew after a foreign woman was allegedly assaulted by a taxi driver after leaving a bar.)

Barring bribery (which almost certainly happens but has its own set of perils), expat bars must do everything by the book, and the book is long.

“The current requirements to open a restaurant are 10 signatures of immediate neighbours and any businesses within 100 yards. A conflict of interest is obvious and a challenge for us to overcome,” Lense explained. “We try to convince other businesses to see the upside in generating more foot traffic.

“The fun fact about this whole thing is your licence is up for renewal every year.”

Curci said that for smaller players the nature of Yangon property leases, where payment is required up front and in full, made restaurants and bars an even riskier and more difficult proposition. Renting a space usually requires payment for 12 months in cash, plus an extra month for the broker’s fee. If the business closes – or is even unable to open – because of licensing problems or disputes with neighbours then this money is simply lost.

“The main problem is cash flow. You need to have bigger pockets to get started,” Curci said. “And kitchen equipment and other initial investment costs are higher because there are fewer options.”

Lense believes the bar scene will recover eventually. Even if the middle class is growing more slowly than expected, it is still growing.

In the meantime, “Every operator needs to find their target audience. Backpackers don’t go to Penthouse. It’s not their scene and it might not be in their price bracket. … You need adaptability. A lot of people here don’t see that,” he said.

50th Street has always been modelled on a Western-style sports bar, but Lense said he noticed a good deal of his regulars were Indian. “More than one have said to me, ‘You know, if you got a few Indian dishes on the menu, we would really enjoy that.’ You have to listen to these guys, because there here five days a week playing pool. You have to look after your own, because they pay your salary.”

“Adaptability” means being willing to go with what works, even if it wasn’t exactly what you had in mind. For example, if you open a restaurant but more people show up late for drinks, go with it: reduce your food menu, add some exciting cocktails and host late night events.

“You’re not going to be making a fortune in this business,” Lense continued. “You just have to make something that’s solid and hold out until the boom starts.”

Curci, at least, isn’t waiting around for the boom to start. Although it was hard to close Mojo’s doors, he says he is excited to pursue other opportunities in Yangon.

“I’m quite happy for my liver as well,” he added.