He said none were in the office at the time. “When police arrived, those [three journalists] were not there,” he told assembled reporters outside Eleven Media Group’s office. At around 9pm he said the journalists had not yet been arrested.

A spokesperson for Tarmwe Township police denied knowledge of the incident. “We don’t know anything,” he told Frontier.

Section 505(b) of the Penal Code prohibits the publication or circulation of any statement, rumour or report, with intent to cause “fear or alarm to the public”. It is commonly used to target political activists; the Assistance Association of Political Prisoners has said vague terms such as “offense against the state” and “public tranquility” leave this section of the law open to abuse by authorities.

The reason for the potential charges is not yet clear, but local media have speculated it may be related to a story written by Phyo Wai Win and published in the October 8 edition of Weekly Eleven News Journal, which touches on controversial business ventures of Yangon Region Chief Minister U Phyo Min Thein.

A post on Phyo Min Thein’s official Facebook page showed a copy of Eleven Weekly Journal on the table during a meeting on Monday afternoon between the chief minister and his cabinet at Yangon Region Government Office.

Phyo Wai Win shared this image on his own Facebook timeline. Ko Oo told Frontier he did not know yet why the journalists had been charged.

It would not be the first run-in between the chief minister and Eleven Media. In November 2016, Wai Phyo and chief executive officer Dr Than Htut Aung were arrested for online defamation under section 66(d) of the Telecommunications Law for an opinion piece that suggested the chief minister had received a US$100,000 watch from a prominent businessman. They spent almost two months in prison and were released on bail after publishing an apology.

Yesterday’s alleged search of Eleven Myanmar Group’s office took place just a week after Reporters Without Borders issued an “incident report” about the threat to Myanmar’s position in the World Press Freedom Index resulting from grave violations of the freedom to inform, since the start of 2018.

These violations include seven-year jail terms imposed on Reuters journalists Ko Wa Lone and Ko Kyaw Soe Oo in September for their coverage of a military massacre in Rakhine State, in a case that has been decried globally as an attack on press freedom.

In the 2018 index, published in April, Myanmar was ranked 137th out of 180 countries, six places lower than in 2017. RSF said there is now every chance that it will fall even further in next year’s index.

Its scores on “environment and self-censorship”, “transparency” and “media independence”— three of the seven indicators used by RSF to arrive at the overall score that determines a country’s ranking — are likely to worsen significantly unless the authorities take corrective measures, the watchdog said. 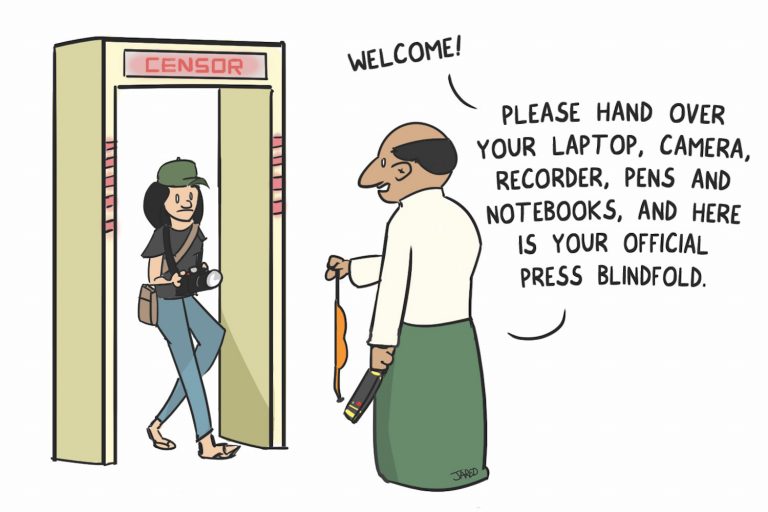 No photos, no videos, little cooperation

Transparency and accountability are elusive qualities among the bureaucrats at the Kayah State election sub-commission.
BY Ei Ei Toe Lwin

Secrecy, suspicion, and security guards: a visit to USDP headquarters

Buddhist nationalism and a focus on rural voters helped the military-backed Union Solidarity and Development Party retain a rare stronghold in southern Mandalay Region, but.
SUBSCRIBE
VIEW ALL ISSUES