Land sales have crashed and so have prices for rubber and seafood in Mon State, where many farmers and fishers are wondering how they are going to survive.

At the start of this year, Mon businessman Nai Htun Lwin was riding high. His ventures  in everything from real estate to petrol stations were turning a decent profit, with more than 70 full-time employees as well as about 50 casual construction workers. The economic impacts of COVID-19 mean his motel has shut, construction has stopped, and sales have dried up at his business that trades imported equipment for fuel stations.

Only the fuel stations remain open and he’s now hardly got any staff left on his books. “We’ve had to let most of our staff go back home without pay,” Htun Lwin said. He gave them an extra half-month of their salary as compensation and hopes to be able to rehire them soon, but is unsure when that might be. “Our work depends on customers; if there’s no customers, our staff have no jobs.”

Htun Lwin, who chairs the Mon State branch of the Myanmar Real Estate Service Association, says the property market in Mon State has ground to a halt as a result of COVID-19. The association branch, though labelled as an industry body, acts as one of about 10 large real estate companies based in the state capital Mawlamyine. Already, four of these companies have closed temporarily due to a lack of interested buyers.

In previous years Htun Lwin sold around 20 plots of land a month, ranging from K10 million to K200 million, and stock was often in short supply. Now he’s selling just four or five plots, and nothing more expensive than K20 million.

“The worst thing is that companies looking to set up businesses in Mon State have stopped buying expensive land,” he said. “Sales of land priced between K50 million and K200 million have stopped; no one wants it.”

Few people want to make such large investments at a time of economic uncertainty. “Many people came to look at our land in March,” he said. “They even told us they would return a week later to pay for the land, but they never came back.” 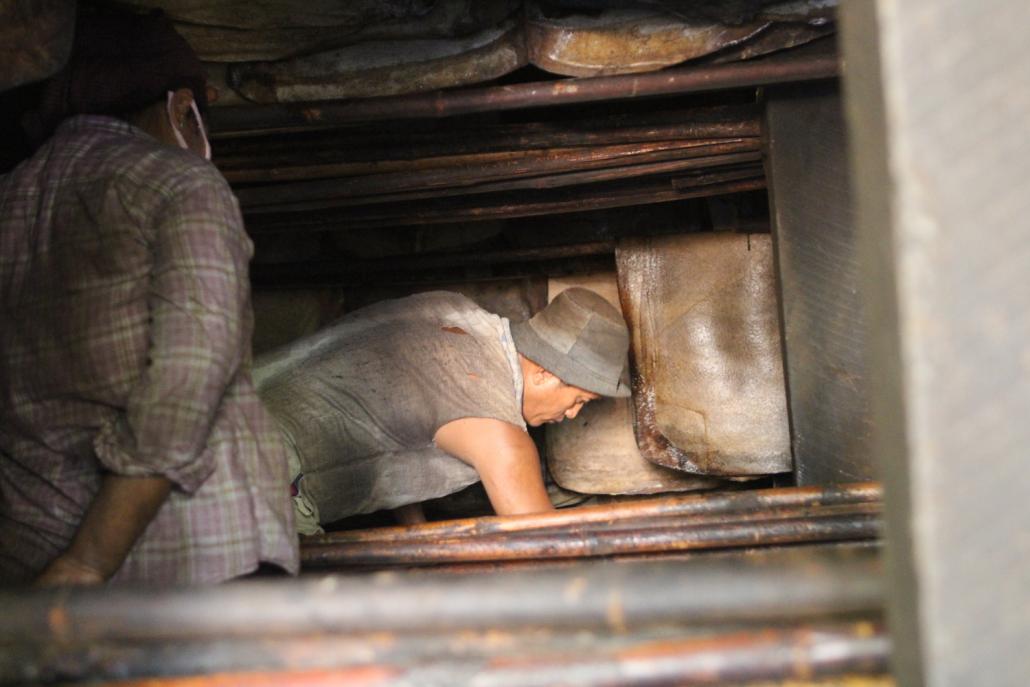 In Mon State, a major exporter of migrant labour, the other key market for real estate sales are those who work overseas, in such countries as Thailand, Malaysia, Singapore, South Korea and Japan. Htun Lwin’s company sells land by instalment to overseas migrant workers, who typically pay K1 million a month.

“Demand from overseas migrant workers has almost stopped,” he said.

But away from urban areas, and among people of far less means than Htun Lwin, the picture is grimmer. Many households in Mon State, which has a population of about two million, rely on remittances from relatives working abroad, particularly in Thailand, but since the COVID-19 pandemic began at least 10,000 migrant workers have returned to Mon State from Thailand, according to the Mon State government. Many are looking forward to working abroad again after the pandemic is brought under control, but with the Thai economy in freefall and the border mostly closed, no one knows when that will be. For the time being most are jobless.

Nai Seik Lyi’s four adult children normally work in Bangkok, but for several months have been stranded at his home in Three Pagodas Pass, on the Myanmar-Thailand border in a part of Kayin State bordering Mon State, because of the border shutdown.

They returned to Myanmar because their children were planning to become novices at Buddhist monasteries but when the border closed in late March they were unable to return.

“There are no jobs for them here. We all need to eat but where can we find the money? And that’s before you have to pay things like electricity bills,” he said.

As well as remittances from migrant workers abroad, Mon State’s economy is heavily dependent on primary industries like rubber, agriculture and fisheries. Trade disruptions and reduced demand for many of these products as a result of COVID-19 have sent process tumbling, to the dismay of employers and workers.

Almost all of the rubber is exported to China, where prices have fallen to record lows because of disruptions to the economy caused by the pandemic.

When the buying season opened in September 2019, rubber was fetching K620 a pound but has since fallen to K450 a pound. Nai Hla Tin, a rubber trader in Thanbyuzayat Township, said this was the lowest he could recall in the 15 years he’s been in the trade, and the price collapse was causing hardship in many Mon communities.

“The reason for the low price is the coronavirus disease. If the price of rubber keeps going down, no one will be interested in the rubber business – neither investors nor workers,” Hla Tin said. 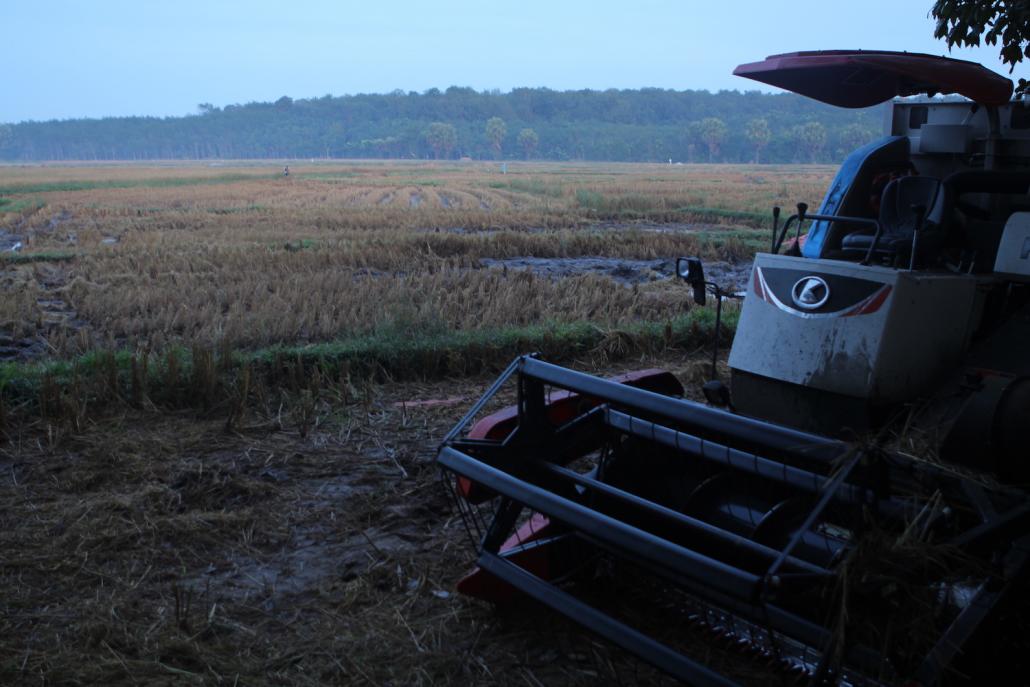 Daw Mya, 63, from Mudon Township, is among those who has temporarily stopped rubber harvesting on her plantation. Her family has 2,500 rubber trees on a 10-acre plot, and she relies on tappers, casual labourers that she hires to bring in the rubber.

“We share [the revenue] 50:50 with the tappers after selling the rubber,” Daw Mya said. “We were earning K15,000 a day each, then we got less and less money. Finally, we were getting only K5,000 each a day and we decided to stop harvesting completely.”

The reduced income from rubber could have knock-on effects for the coming paddy planting season. Many farming families in Mon State use cash from the rubber crop to pay for the inputs needed to grow the rice that provides sustenance until the next harvest. Disruptions to transport because of the pandemic have pushed up the price of a bag of fertiliser imported from Thailand to K25,000, from K23,000 last year.

Although farmers can borrow K150,000 an acre for up to 10 acres at low interest from the state-owned Myanmar Agricultural Development Bank, this is not enough to cover the full cost of cultivation and those who owe money to MADB from previous years are banned from borrowing at all. Daw Mya said she recently took a loan from an illegal moneylender – at a much higher interest rate – to pay back her MADB loan from last year so she could access loans to plant nine acres of paddy for the coming monsoon season. She’s not sure how she’ll be able to clear her new debts.

“The lives of farmers have not been easy this year,” she said. “We do not have enough money to buy fertiliser, which we need for both the rubber trees and the paddy. I am worried about what we are going to eat next year. We will have a big problem.”

Fishing businesses are hurting, too, in Mon State. They normally export most of their catch to China but have been unable to since China introduced restrictions on the border because of COVID-19, said U Myint Soe, chair of the Mon State Fisheries Federation.

Business is down by 80 percent, Myint Soe said, because the uncertainty over when China will fully re-open the border meant traders were reluctant to buy seafood to keep in cold storage.

The downturn is also likely to affect workers on offshore fishing boats. Myint Soe said about 5,000 crew members on fishing boats from Thanbyuzayat and Ye townships are due to return to port at the end of the month. The low prices for their catch mean they will have problems supporting themselves until the season re-opens in October, after the rains.

“All the fishermen working at sea will return home soon, but they will face a struggle to survive until the next season,” he said. 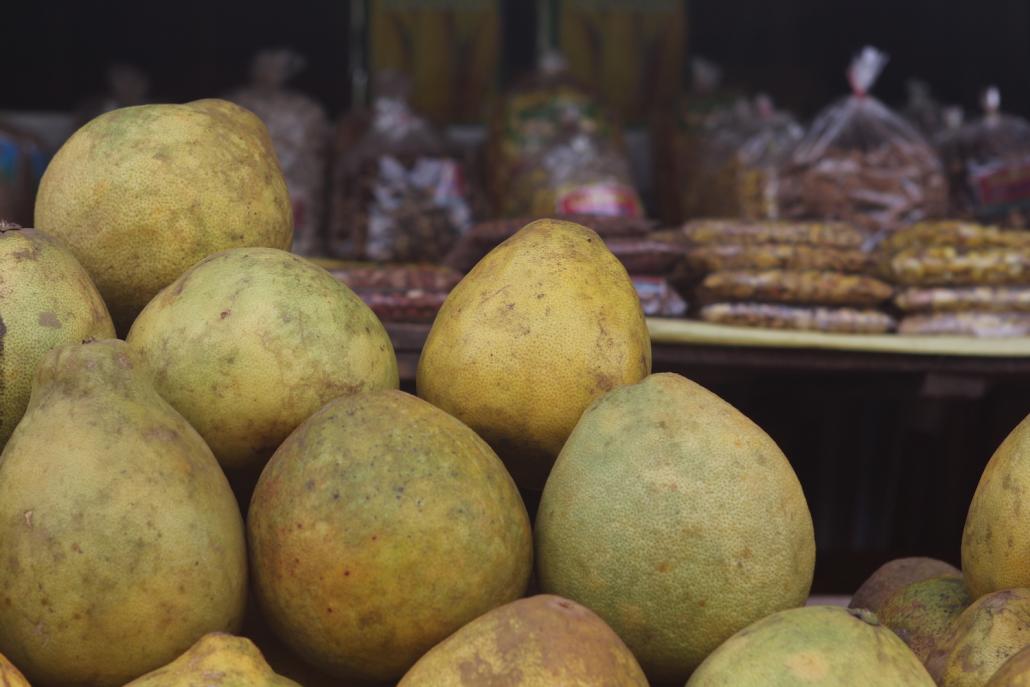 Pomelos for sale beside the Yangon-Mawlamyine Highway. Fruit traders say prices have more than halved in recent months as a result of COVID-19. (Thomas Kean | Frontier)

Mon State is also famous for its fruit products, particularly mangosteen, durian, rambutan, breadfruit, jackfruit, coconut and areca nut. But Ma Ei Myo, a fruit trader in Ye Township – the main producing area in Mon State – said mangosteen and durian prices had dropped more than half since COVID-19 emerged. Like fisheries products, much of the crop is exported to China.

Previously Ei Myo was sending 50 packs of mangosteens a day to Lashio in northern Shan State, from where they are exported to China. Now she’s sending only 15.

“The price has been very unstable. Before a mangosteen was K100, then it went down to K20 and now it’s back to K40 today,” she said. “At least it’s a bit higher than before.”

Similarly, durians have fallen from K3,500 each to K1,500, and Ei Myo is sending only 2,000 a day, down from 5,000. In an indication of how widespread the economic impact of COVID-19 is, buyers are also now unable to pay her immediately.

“The company can only send the money after they’ve sold the fruit, so it takes a while to get it from them,” she said. “Before I got the money the same day as when I sent the fruit. Things were very different last year.”

Htun Lwin said the pain in Mon State would endure for months to come. “Whether you’re in rubber, fruit, rice, fisheries – all of these industries have been hurt a lot by COVID-19 over the past three months,” he said. “Even if the government lifts all restrictive measures and the economy can operate as normal, a lot of people have already lost their jobs. I think it will take at least five months or more to recover.”

TOP PHOTO: The Yadanarpon rubber factory in Thanbyuzayat Township, southern Mon State. Rubber is the main industry in Mon State but prices are so low that many are not bothering to harvest from their plantations. (Thomas Kean | Frontier)