The unseemly rush to amend 66(d)

A hurried move to amend the notorious clause of the Telecommunications Law has generated a chorus of disapproval from journalists and civil society groups.

A DRAFT amendment to the notorious section 66(d) of the 2013 Telecommunications Law has been submitted to the Union Hluttaw amid an escalating campaign for the repeal of the legislation’s defamation provisions from journalists and civil society groups.

The draft amendment was submitted to the Amyotha Hluttaw on July 13, eight days after it was approved at a cabinet meeting of the National League for Democracy government.

The draft was submitted by U Kyaw Myo, the Deputy Minister of Transport and Communications, who said it covered five points needing amendment.

The first proposed change involves updating the ministry’s name in the legislation, to that of Transport and Communications. When the Telecommunications Law was enacted in October 2013 during the Thein Sein government, it was under the Ministry of Communications and Information Technology.

The third amendment proposes that prior permission to take legal action under 66 (d) will no longer be needed from the ministry. The justification for this change is that it will expedite legal action.

The fourth amendment addresses criticism over the denial of bail to defendants in 66(d) cases. It proposes that bail may be granted in 66(d) and other offences under the Telecommunications Law in cases involving defamation or using threatening language, operating a communications service without a licence, accessing a network to cause disruption, and intentionally interfering with a network. 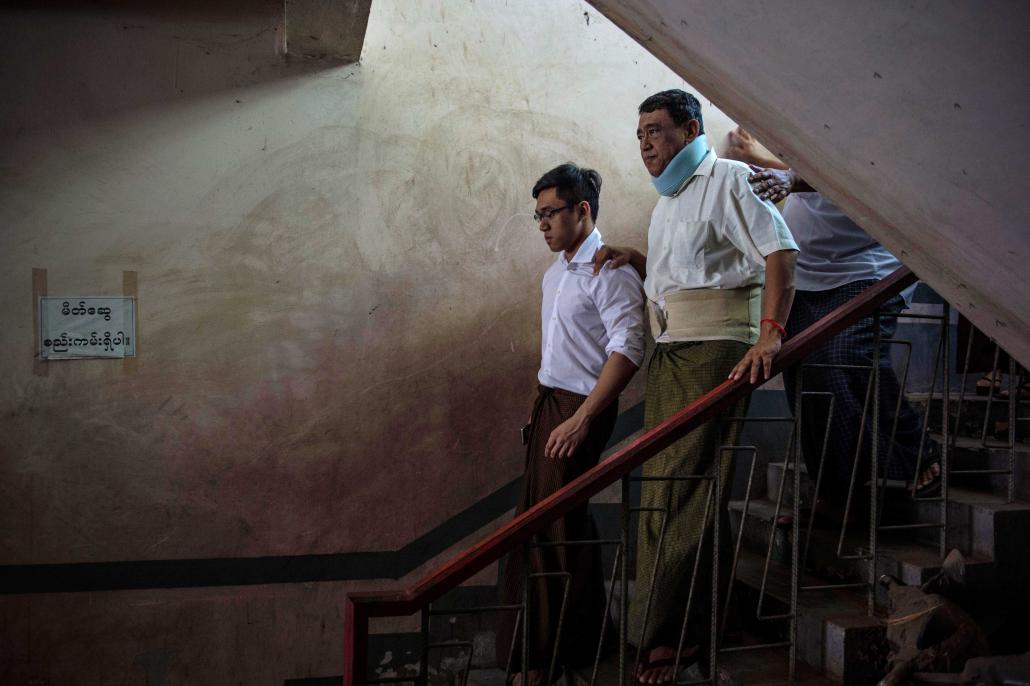 Eleven Media chief executive Than Htut Aung walks down the stairs of the Tarmwe Township courthouse on January 6. He had been charged under the Telecommunications Law after penning an article accusing Yangon Chief Minister Phyo Min Thein of graft. (AFP)

A member of the committee, U La Min Htan (National League for Democracy, Chin-10), told the Hluttaw that the draft had been scrutinised and deserved to be approved.

“Because Amyotha Hluttaw speaker Mann Win Khaing Than had announced that MPs who wanted to submit amendments could do so by July 18 at the latest, it means there are still chances to discuss and amend the draft,” lawmaker U Ye Htut (NLD, Sagaing-5) told Frontier by telephone on July 13.

Ye Htut had tried twice in the past to have the Telecommunications Law amended but had been blocked from doing so by the NLD’s scrutiny committee, headed by party spokesman U Win Htein.

“We should take time to improve it, but it seems to be already decided once and for all,” said Ye Htut, who added that he was preparing to take part in the debate on the draft amendment.

Union Solidarity and Development Party MPs approached by Frontier said they did not wish to comment before the amendments were discussed in the Hluttaw.

Ko Hla Phone, who in November 2016 was sentenced to two year’s imprisonment under 66(d) and another offence over a series of Facebook posts of photoshopped images of former President U Thein Sein and Tatmadaw chief Senior General Min Aung Hlaing, expressed disappointment with the draft amendments.

“The changes are not enough; the situation of the accused should be taken into account. We must wait and see as it is still in the draft stage,” said Hla Phone, who had denied being responsible for the posts for which he was jailed.

U Zeya Hlaing, who is among of the activists campaigning for the repeal of 66(d), said there should have been more community consultation before the draft amendments went before the Hluttaw.

“The draft law was submitted in a hurry, and after the discussion in the Hluttaw there will not be enough time to hear the voice of the people,” said Zeya Hlaing, who is also a member of the Myanmar Periodicals and Literary Council.

At a meeting with MPs and government officials in Nay Pyi Taw on June 22, activists opposed to 66(d) were told that they would have an opportunity to meet again after the draft amendment was completed and their opinions would be taken into account.

The meeting never took place, Zeya Hlaing told Frontier, adding that he had searched the websites of the Hluttaw and ministries in vain for any announcement welcoming public input on the draft amendments.

The draft amendments mean that journalists remain at risk of being detained under 66(d) once a defamation complaint is made against them, he said.

“Small changes were made to make it easier for the government [to look like it has taken action],” Zeya Hlaing said.

Data gathered by the 2013 Telecommunications Law Research Group shows that more than 90 percent of the cases brought under 66(d) involve accusations of online defamation.

U Kyi Myint, a lawyer, was dismissive of one of the proposed changes to 66(d), saying the right to file a complaint on behalf of another person was “a stunt”. He added there was no need for the defamation provision in the 2013 Telecommunications Law because defamation was already an offence under Section 500 of the Penal Code.

“Only when the defamation provision is removed from the Telecommunications Law will there be justice,” he told Frontier.

The submission of the draft amendment to the Amyotha Hluttaw came on the same day that journalists and others who formed a group to campaign for the repeal of 66(d) called for widespread debate on the issue.

The group criticised the draft amendment on three grounds: it retains the defamation provision, continues to enable the immediate arrest and unjust detention of defendants, and denies the right of the ministry to review cases before complaints are filed. 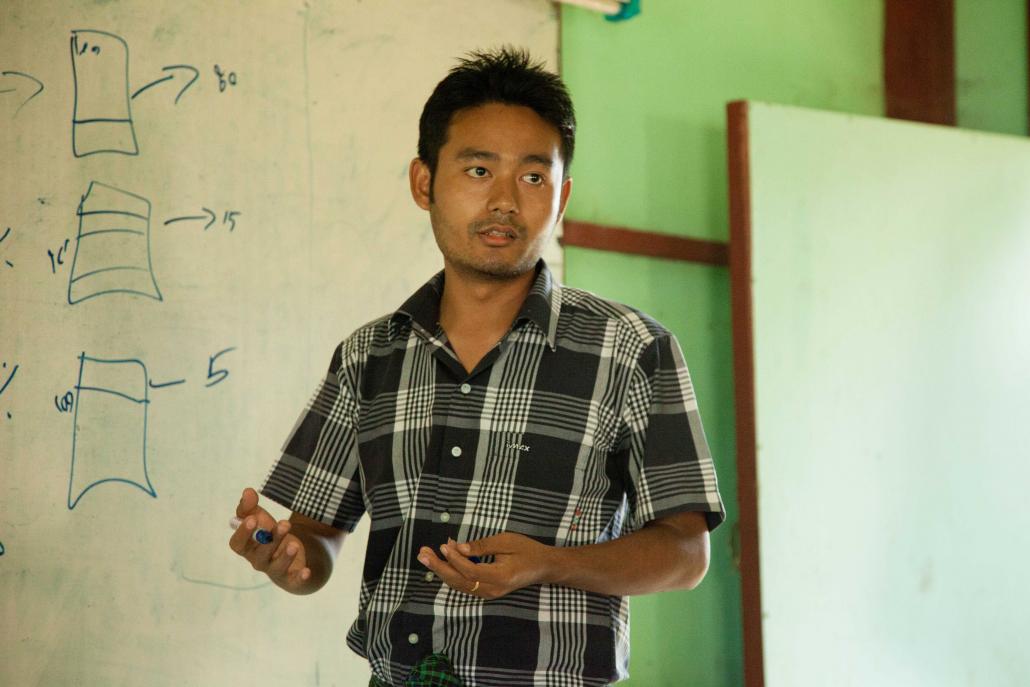 Maung Saungkha, who was sentenced to six months’ imprisonment under 66(d) for penning a poem deemed to be defamatory of former president U Thein Sein. (Theint Mon Soe aka J | Frontier)

“If the draft is approved in its present form, the situation will be worse than before,” said Maung Saungkha, who spent six months in jail after being arrested under 66(d) in November 2015 for publishing a poem on Facebook about having a tattoo of an unnamed president on his penis. Authorities regarded it as a slight on Thein Sein.

“It does not say bail must be granted; it only says bail could be granted,” said Maung Saungkha, who was denied bail after his arrest.

He said because the draft had reduced the ministry’s authority, “the police could do what they like. It should not be like this. It makes the situation worse,” he said.

Criticism of the move to amend 66(d) focuses on the fact that the draft was announced, submitted to the Hluttaw and put up for debate in a rush.

The number of cases brought under 66(d) has risen sharply since the NLD government took office, prompting a group of 22 civil society organisations to unite and fight for its repeal. The handling of the draft amendment makes the group and its supporters worry that their voices will be ignored.

Kyi Myint said that the draft submitted to the Amyotha Hluttaw was inadequate.

“What they are doing now is just giving the run-around; it’s their response to the voice of the people,” he said.

TOP PHOTO: An activist wears a t-shirt denouncing section 66(d) of the Telecommunications Law, as lawyers, journalists, cyber technology professionals and activists rally against the clause in Yangon on January 22. (AFP)