The split in the student movement

A proposal to rebuild the dynamited Rangoon University Student Union building has ignited a debate in a student union movement that is far from united.

DURING A visit to Yangon University last June, Yangon Region Chief Minister U Phyo Min Thein was asked by a student about the status and freedom of the nation’s student unions.

As a former student leader himself – Phyo Min Thein was once one of the three secretaries of the Lower Myanmar branch of the All Burma Federation of Student Unions – his answer was surprising.

“Student unions need to be reformed after studying their history,” he said.

The chief minister’s view about student unions was clear. In recent months student activism has emerged as a major headache for the regional government because of a split in their ranks.

The ABFSU (known by its Myanmar acronym of Ba Ka Tha) and the University Students’ Union (Ta Ka Tha) want to begin negotiations with the government over the status and freedom of student unions. A new group, the National Students Union League (Na Ka Tha), is cooperating with the government.

Before and immediately after the brutal police assault on protesters at Letpadan in March 2015, students were united against the controversial National Education Law, enacted the previous September. The law did not recognise the right of students or teachers to form unions.

Divisions in the student movement became apparent after Letpadan, when the head of U Thein Sein government’s negotiating team at peace talks with ethnic armed groups, U Aung Min, and other senior figures met student groups to try to ease tensions.

Of the 126 people arrested in the Letpadan crackdown, about 70 were students, including many senior Ba Ka Tha members.

While the government released those who could prove they were students, it kept the Ba Ka Tha members in jail for almost a year, arguing that they were not students because they weren’t enrolled at a university.

While they were released in an April amnesty, relations between Ba Ka Tha and the National League for Democracy have been strained.

In an effort to ease tensions, Ba Ka Tha leaders decided to hand over control of the organisation to a “new generation” of 21 students, who took up their places on Ba Ka Tha’s Central Working Committee in December.

Ko Aung Htet Aung, one of the new CWC members, said that although the handover was rushed, “we have been in the group for years, so we know how to deal with the problems”.

The creation of Na Ka Tha was supported by the NLD government and the union’s leaders met the Education Minister, Dr Myo Thein Gyi, on May 29. The union has since been working closely with the government.

In February, the issue of rebuilding the former Rangoon University Student Union – dynamited by the Ne Win regime on July 8, 1962 a day after a campus protest when soldiers gunned down students – began to revive tensions between the government and student unions.

It is not clear who first raised the issue of rebuilding the RUSU building. However, Ko Zayar Lwin, an executive member of Na Ka Tha, said that the group had discussed it in their meeting with Myo Thein Gyi in May 2016. 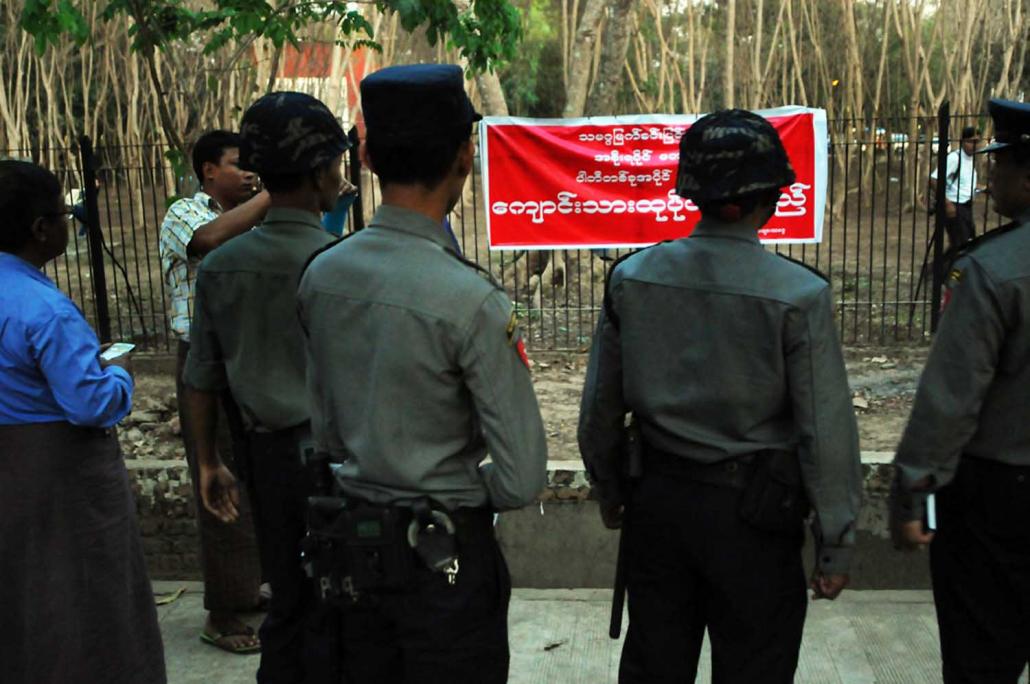 Police officers at the grounds of Yangon University, where student activists were holding a protest. (Steve Tickner | Frontier)

At around midnight on February 26, the Yangon government authorities began secretly preparing to rebuild the RUSU building by laying foundations at its former site. The move angered some students leaders and work was suspended after the ABFSU led a candlelight vigil at the site on February 27.

Why has the issue of rebuilding the RUSU emerged at a time when the headlines are being dominated by the peace process, and in the commercial capital, by such events as the launch of the Yangon Bus Service?

It seems like it was a case of student activists being at a bit of a loose end.

“Actually, the peace process is a bit far from [the priorities of] student unions,” said Zayar Lwin. “Politics is too quiet at the moment and other important issues are too quiet, so we had to do something.

“We had to demand the rebuilding of that student union building whatever government is in power; it’s like asking to repay a debt,” he said, adding that Na Ka Tha did not know why the government had decided to allow RUSU to be rebuilt. “They said they would cooperate with us; and I think it’s neither too late nor too soon to rebuild.”

The issue of whether to rebuild RUSU has been debated by students for generations and there are marked differences of opinion, based mainly on age.

Ba Ka Tha wants to guarantee the status and freedom of student unions throughout the country. Students who support Ba Ka Tha met in Yangon on February 26 to discuss whether RUSU should be rebuilt. After a day’s deliberations, there was no clear outcome.

On February 28, a day after work was suspended, Phyo Min Thein met Na Ka Tha leaders and central executive committee members of the NLD at Yangon’s Royal Rose restaurant to discuss rebuilding RUSU. Ba Ka Tha members had not been invited, but they attended anyway. The meeting was aimed at forming a committee to oversee reconstruction of the RUSU, but when Ba Ka Tha members showed up the plan was cancelled. 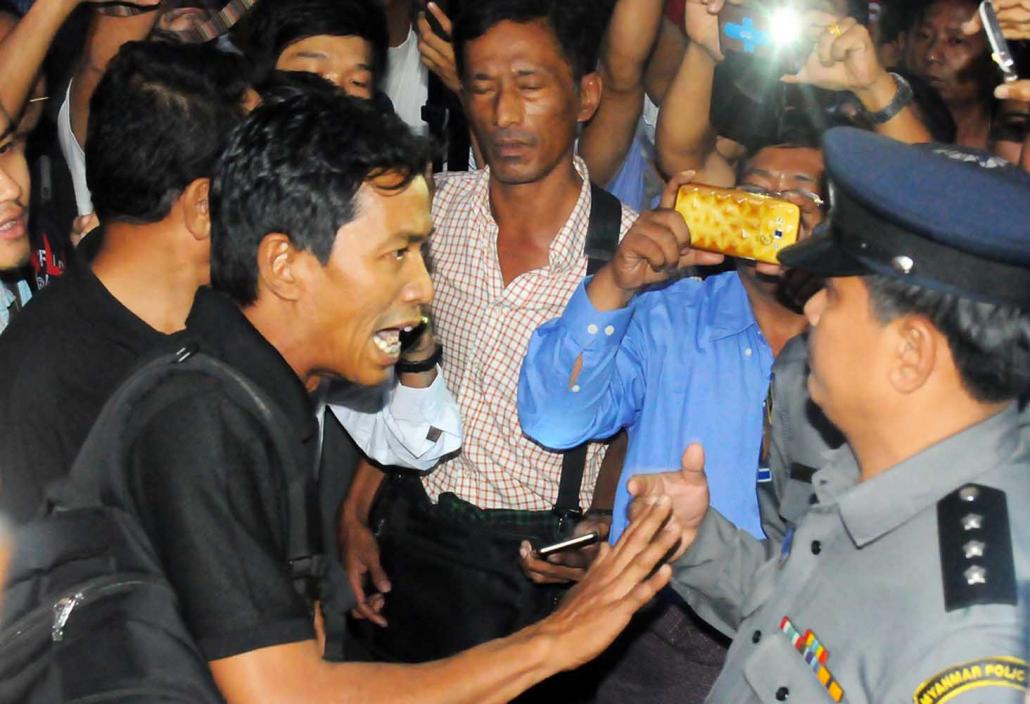 A student protestor engages in a heated discussion with a police officer at a Yangon University demonstration. (Steve Tickner | Frontier)

The Ba Ka Tha representatives then tried to arrange negotiations with Phyo Min Thein­ and the NLD CEC members to discuss the rebuilding plan but were rebuffed.

State Counsellor Daw Aung San Suu Kyi has not met Ba Ka Tha since before the 2012 by-elections. Neither has there been any contact between the NLD and the National Network for Education Reform, a key civil society group involved in negotiations over the National Education Law, since February 2015.

That is when an NNER leader, Dr Thein Lwin, was expelled from the NLD’s CEC for participating in negotiations with the government as a member of the network. The NLD said that his actions were against the rules for party members.

Despite the expulsion of Thein Lwin and Aung San Suu Kyi’s ostracism of the NNER, the network has remained heavily involved in student affairs and education reform. A student who spoke to Frontier on the condition of anonymity, said Aung San Suu Kyi, who was Education Minister for seven days after the change of government until she relinquished the position, had encouraged students not to become involved with the NNER.

Ko Kyaw Ko Ko, a former chairman of the central executive committee of the ABFSU, said Phyo Min Thein would not dare to act without the approval of Aung San Suu Kyi.

“In the meantime, we can see that U Phyo Min Thein has forsaken Ba Ka Tha and the neutral unions while simultaneously encouraging Na Ka Tha; he’s made a big mistake,” he said, adding that it could lead to protests against the government.

Analysts say Phyo Min Thein prefers to deal with Na Ka Tha because it has previously cooperated with the Yangon government. This was why it was the only student union invited to the February 28 meeting with the NLD CEC.

NLD spokesperson U Nyan Win declined to discuss the issue. A leader of the 88 Generation Peace and Open Society movement, Ko Mya Aye, who is a member of the temporary committee formed for rebuilding the RUSU, also declined to comment.

Although both the government and Na Ka Tha have put a priority on rebuilding RUSU, Ba Ka Tha says the status and freedom of students unions is more important. Na Ka Tha sees things quite differently.

“We are developing our freedom by doing our work,” said Zayar Lwin of Na Ka Tha. “We don’t need to ask for freedom and guarantees from the government.”

TOP PHOTO: Past and present students hold a candle lit ceremony at a monument on the site of the Rangoon University Student Union building, which was destroyed in 1962. (Steve Tickner | Frontier) 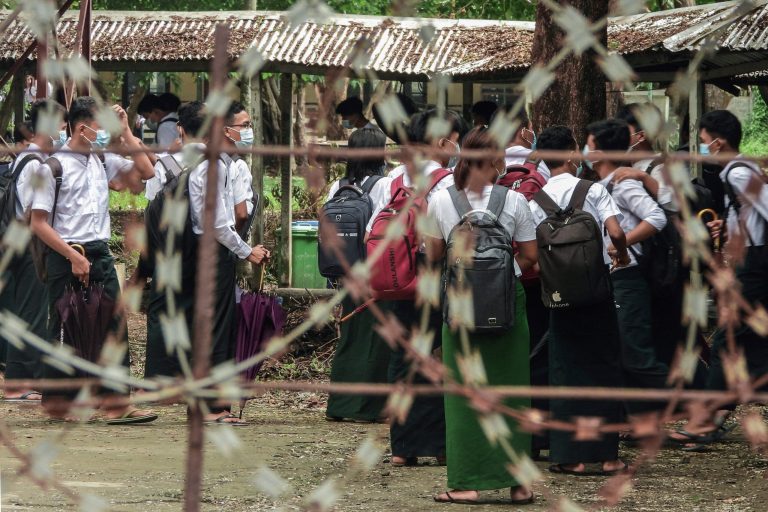 The overwhelming rejection of state education since the coup has spawned the emergence of learning alternatives, including plans for both physical and virtual universities.
BY Frontier