The other Htin Kyaw

Indefatigable activist Ko Htin Kyaw has been in and out of jail for years but is rethinking his political strategy following the change of government.

When international broadcaster CNN reported the decision by the National League for Democracy to name U Htin Kyaw as its nominee for the presidency, it made an understandable error. It illustrated the story with a photo of the wrong Htin Kyaw. CNN used an image of Ko Htin Kyaw, a prominent activist who is much better known to the public than President Htin Kyaw, whom many in Myanmar knew little about until his appointment.

Ko Htin Kyaw, 53, the leader of the community-based Movement for Democracy Current Force, is famous because of aggressive and unrelenting political activism targeting the military junta and U Thein Sein’s administration.

He has been arrested and jailed so many times for his political activism that Amnesty International called on the authorities in September 2014 to cease their “relentless persecution”. During one of his many court appearances, he displayed Thein Sein’s name written on the sole of his foot, a powerful cultural insult. He called it his “sole campaign”.

Protests against the judicial system meant he often had to be carried by police in and out of hearings, during which he sat on the floor. In late 2007 he went on hunger strike in Insein prison in support of the release of monks and others held without charge after the protests earlier that year known as the Saffron Revolution. He went on another hunger strike in Insein prison in 2013.

Those who know Htin Kyaw well say it is an unpleasant experience to be his enemy.

Htin Kyaw was among the 83 political prisoners released on April 17 under pardon by President Htin Kyaw. A few days after his release, Frontier spoke to the activist at a friend’s home in Yangon’s North Okkalapa Township. Although a powerful presence in court or at a protest, he was gently spoken.

It is widely believed that a demonstration against rising living costs by Htin Kyaw and about 10 others outside Yangon’s downtown Theingyi market in February 2007 was an early spark for the monk-led protests later that year. It was one of the first street protests in Yangon for many years, and the group followed it up with another demonstration at Hledan Junction in April 2007.

“The police wanted to arrest and beat us, but they were confused,” Htin Kyaw recalled. “We had chanted in support of lower commodity prices but we also chanted the wish that Senior General Than Shwe and General Maung Aye be healthy and rich. So the police were confused and afraid to arrest us,” he said.

“We were able to hold two protests using this technique and the reason we held them was to make the people aware that a group had demonstrated against the junta in downtown Yangon.”

His luck ran out at a protest at Theingyi market on August 25, 2007, when he and others held photos of the junta’s three top generals – Than Shwe, Maung Aye and Thura U Shwe Mann – and shouted that they were responsible for making the people poor. They were arrested and beaten so badly that Htin Kyaw lost some teeth. In November 2008 he was sentenced to 12-and-a-half years in prison. Htin Kyaw raises his arms after his release from Insein Prison on December 31, 2013. (Soe

When Htin Kyaw was released from Insein prison on April 17 he was serving a sentence of 13 years and 10 months that followed his arrest in Yangon on May 5, 2014 while making a speech and distributing leaflets calling for the resignation of the government. He had been charged with multiple offences “against the State or against public tranquility” under Section 505(b), and under Section 18.

A mechanical engineer by training, he once worked as a senior mechanic for oil and gas tycoon’s U Michael Moe Myint’s company before he resumed his political activities. “He was an NLD youth member but was forced to resign due to pressure from his former employer,” says a profile compiled by the Assistance Association of Political Prisoners.

Political activism has cost Htin Kyaw dearly. He has no job, no home and has been married three times. He stays with friends.

“I began my political career in 1988 when I started an underground group,” Htin Kyaw told Frontier, referring to the protests against junta rule nearly 30 years ago. “Then, I joined the NLD. I promised my wife I would quit politics after the NLD won the election in 1990 but I couldn’t because the military did not hand power to the winning party,” he said.

“Four years later my wife came to my office and told me I could choose between her or politics. I had to get a divorce because I couldn’t leave politics.”

Htin Kyaw re-married but that relationship also ended after a few years because of his political activities.

“My second wife’s brother is a police officer. After they found out about my involvement in politics, I was banished from the family by my wife and was divorced again.”

He has since re-married, to the sister of a friend, and they have a child. He also has a child to each of his previous wives.

“I met my current wife when I was hiding from the police,” he said. “I had nowhere to sleep and chose to stay at her small betel nut shop. She did not know my real name and thought I am an ordinary mechanic and her brother’s friend.

“She didn’t know who I am until she was detained by police when they wanted more information about me after I’d been arrested.”

As well as leading the Movement for Democracy Current Force, formed in 2012 to campaign on behalf of grassroots communities and has been heavily involved in protesting against land grabs, Htin Kyaw also heads the Myanmar Development Committee, formed in 2006.

He declined to say how many members the MDCF has, but said it was open to all, regardless of religious belief or ethnic background.

His role in campaigning against increases in the cost of living in 2007 has earned him the nickname, Kon-ze-hnon Ko Htin Kyaw (“Commodity price” Ko Htin Kyaw). The campaign in 2007 against higher commodity prices was part of a deliberate strategy to win public support.

“The people might have been confused if we used words like ‘human rights’ and ‘equality’ and it was more effective to use the simple message that commodity prices must come down,” Htin Kyaw said.

“I wasted a lot of human resources because I persuaded a lot of people, my friends, to join the revolution and the result has been an unstable life for them until now and I still have to rely on them for a place to sleep. I am a burden for them and I want to give something back to them.” 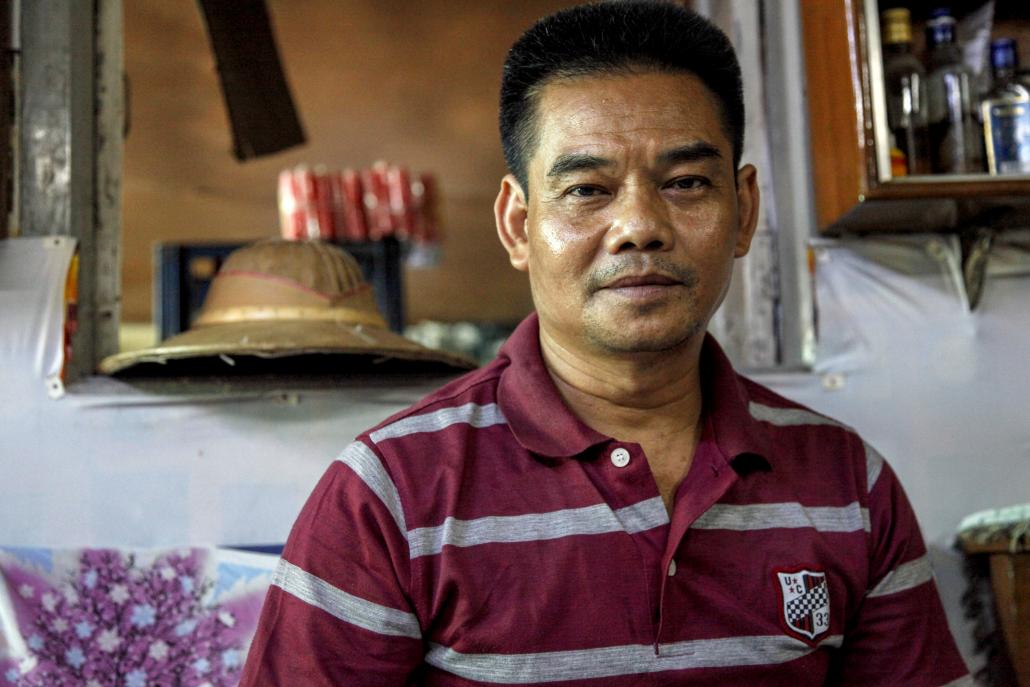 Democracy activist and former political prisoner Ko Htin Kyaw during an interview at his Yangon home on April 20. (J / Frontier)

Asked why he remains committed to activism, he said the revolution would remain unfinished as long as the military controlled the administration and the judicial system and was able to block constitutional reform.

“The Minister for Home Affairs is appointed by the military and 25 percent of MPs are soldiers who are not elected. And there are military men who have been appointed to the judiciary. We need to solve these problems,” he said.

However, the strategy of the MDCF might have to change, Htin Kyaw said.

“For the time being, we have decided to protest but in a limited way because we do not wish to create any difficulties for the NLD government,” he said.

The MDCF wanted the military intelligence department to be abolished because it might pose a threat to the NLD government, he said, adding that the Ministry of Home Affairs – one of three ministries, along with Defence and Border Affairs that are headed by serving military officers – must be “totally” under civilian control.

Htin Kyaw says he has no immediate interest in forming a party because he prefers to be involved in politics outside parliament.

“We might form a party and contest elections after Daw Aung San Suu Kyi retires from politics, but as long as she can work we will support her.”

The change of government has turned his thoughts to starting a business.

“I know about wine making and I am a skilled mechanic. So, I will start a business,” Htin Kyaw said, adding that he wanted to provide job opportunities for fellow activists.

“I wasted a lot of human resources because I persuaded a lot of people — my friends — to join the revolution and the result has been an unstable life for them until now, and I still have to rely on them for a place to sleep. I am a burden for them and I want to give something back to them.”

But his court appearances are not over. Despite his presidential pardon, Htin Kyaw faces outstanding charges over a land dispute in North Okkalapa Township.