A village on Rakhine State’s Ramree Island is at the centre of a controversy around the granting of citizenship to thousands of Muslims, with some alleging corruption.

However, because the cards identify the Muslims as Kaman, which qualifies them for citizenship as a member of one of Myanmar’s 135 officially recognised ethnic groups, there have been protests by their Rakhine Buddhist neighbours, who accuse them of being “Bengali” because they believe they are illegal immigrants from Bangladesh.

The Kaman, who claim to be the ancestors of Muslim archers employed by the Arakanese kings prior to the annexation of the Rakhine kingdom by the Bamar Konbaung dynasty in 1784, are generally accepted by their Buddhist neighbours as belonging to Rakhine. However, in Ramree and elsewhere in the state, their numbers are disputed, with Rakhine nationalists and some Kaman claiming that many Rohingya Muslims are posing as Kaman in order to get citizenship.

Kyauknimaw village, in an impoverished area of Ramree Island, is not formally recognised as a village or village tract and its administrative status is ambiguous.

Indicating a signboard on a nearby government middle school, a shopkeeper in the village said, “We have no exact label as a village or village tract, so we just painted it ‘Kyauknimaw’”.

The village is notorious as the site of the rape and murder of a Buddhist woman by three Muslims in 2012, an incident that triggered communal violence that engulfed Rakhine State and made headlines around the world.

Since the violence of 2012, which displaced more than 100,000 Muslim Rohingya and Kaman and a smaller number of Rakhine Buddhists across Rakhine, access to the village by the sea has been restricted for outsiders.

When Frontier visited Kyauknimaw in early March, a police checkpoint blocked access to non-residents. Beyond bamboo barrier, the village seemed unremarkable, with residents quietly pursuing their livelihoods, which include fishing off the coast.

After the 2012 riots, more than 6,000 Muslim residents of Kyauknimaw tried to regain normal access to education and the freedom to travel. To exit the village through the police checkpoint, they needed to have a citizenship card, which most lacked.

On December 14, 2017, a group of Muslim community leaders, who were among the few to have citizenship cards, travelled to Nay Pyi Taw to explain their plight and ask that restrictions imposed on them since 2012 be lifted.

A member of the group told Frontier that they had sent letters to 11 ministries to explain the situation and to ask that Muslims be able to leave the village. “I believed that they understood us,” the Muslim leader said.

In late December 2017, a group of Union-level immigration officers from Naw Pyi Taw – four officers and an assistant director – travelled to Kyauknimaw and stayed in the village for eight months to process citizenship applications from local Muslims.

A Rakhine Buddhist resident told Frontier that villagers had to provide food and lodging to the officers during their stay. “You can imagine that if those people [immigration officers] stay in the village for months, who must treat them,” the resident said.

Rakhine Buddhist residents of the village and a Kaman political party, the Kaman National Progressive Party, were outraged, claiming that only about 300 of the Muslims were Kaman and the rest were “Bengali”. They demanded that the Immigration Department review the eligibility of the new citizenship card holders.

At a meeting in Kyauknimaw with its Rakhine Buddhist residents on November 27, National Registration and Citizenship Department Deputy Director-General U Shein Win admitted that when immigration officers returned to the village they found that 21 people had been “wrongly given” cards that identified them as Kaman.

Shein Win told the meeting that the 3,285 others were eligible for citizenship because they were Kaman. The Rakhine Buddhist residents, however, remain unsatisfied. 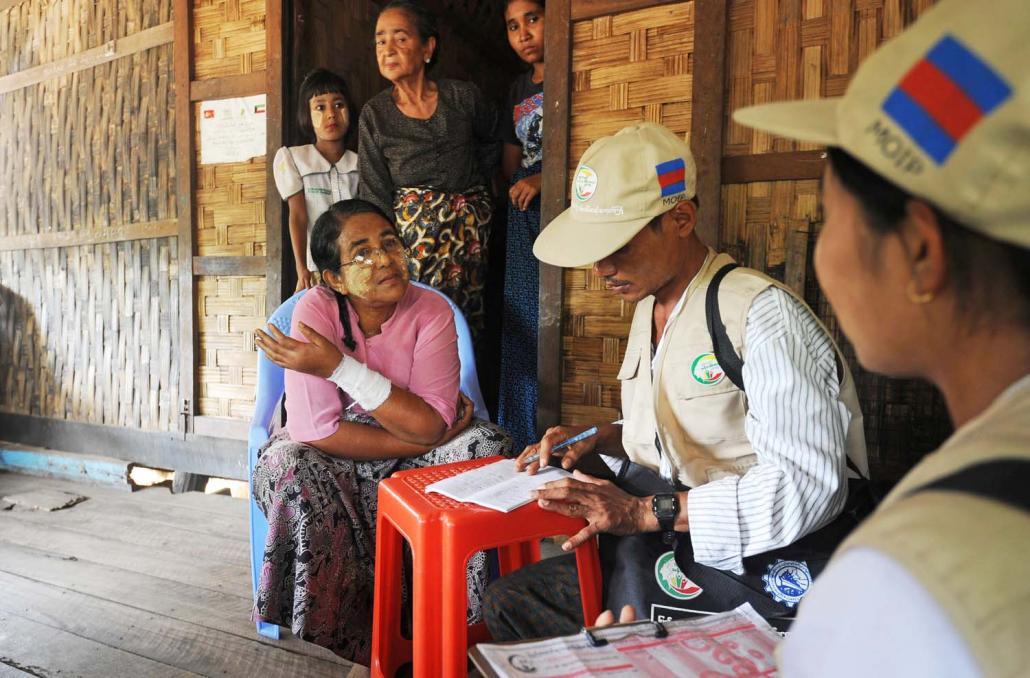 An ethnic Kaman woman (left) responds to census enumerators in Bumay village in Rakhine State on March 31, 2014. The data on ethnic populations from the census has not been released, contributing to confusion and controversy. (AFP)

In Kyauknimaw, some who identify as Kaman are called “fishermen kalar” by their Buddhist neighbours, who accept them as members of the community. Kalar is a racial term used across Myanmar, mostly to denote people of South Asian descent. However, the local Buddhists refer to most of the village’s Muslims as “Bengali”.

In the official household data for Kyauknimaw kept by the General Administration Department, the religion of household members is mentioned but the box where their “race” should be written is left blank.

Immigration Department data updated in December 2017 shows that of more than 6,700 Muslim residents in Kyauknimaw, only 426 held citizenship cards listing them as Kaman, and 4,359 Muslims lacked formal citizenship but held obsolete identity documents known as “trifold cards”. Another 1,969 residents had no identity cards.

The citizenship registration process involves a number of steps, with the first requiring proof of an applicant’s ancestry over several generations, which is usually provided in the form of primary school enrolment certificates.

Frontier was shown some of the application documents in Kyauknimaw, including school enrolment certificates from 1951 to 1956, on which applicants were described as “Rakhine Kalar”,  “Mohammedan” or “Rakhine Muslim”.

“Rakhine Muslim”, which suggests a regional rather than a racial identity, was declared a preferred identity designation at a meeting of Muslim leaders in Alethankyaw village, in northern Rakhine’s Maungdaw Township, in 1951. Rakhine Buddhists later began objecting to the term “Rakhine Muslim”, arguing that Muslims cannot be Rakhine.

Starting from 1965, Muslims enrolling in schools were described as either “Myanmar Muslim” or “Myanmar Mohammedan”.

A Rakhine Buddhist community organiser in Kyauknimaw, who has campaigned against the Immigration Department’s mass granting of citizenship to local Muslims, told Frontier that there was not even a “tiny hint” of any Kaman identity marker in the school enrolments used as evidence in citizenship applications.

The second step in the citizenship card application process requires applicants to provide their former identity cards as well as those of their antecedents.

The third step requires endorsements of an applicant’s eligibility from village elders and local government administrators, who must be citizens. At Kyauknimaw, they were asked to vouch that the applicant was Kaman.

“One of the village heads who recommended the applicants is the Bengali representative who was appointed [by the GAD] to collect population lists in 2013. So the village elders and heads are also fake-Kaman,” said the community organiser.

Another step was a document from the Kyauknimaw village head declaring that the applicant lived in the village.

During the mass disbursement of citizenship cards, 786 Muslims were deemed ineligible, in many cases because they lacked the necessary documents.

Muslims who wanted citizenship cards that identified them as Kaman had to pay a total of K125,000 in bribes, said Buddhist and Muslim residents of Kyauknimaw who asked not to be named.

The officially stipulated fee for processing citizenship card applications is only K6, but in reality most people in Myanmar are asked to pay at least K6,000, even if they come from Buddhist families and authorities do not hold their eligibility in suspicion.

They said applicants had to pay K10,000 for an application form, recommendation letters from village-level administrators cost K15,000, and the amount paid to the immigration officers from Nay Pyi Taw for each card was K30,000. The highest single amount was the K40,000 paid to the Ramree Township immigration department for one card, for which applicants also had to pay a collection fee of K30,000.

The head of immigration in Ramree Township, U Tun Aung, said to Frontier in an interview in his office that he knew nothing about “that case” at Kyauknimaw.

However, Muslims in Kyauknimaw who received citizenship cards in the mass handout deny that they had to pay bribes.

“Some people are attacking us with this rumour. We didn’t have to pay anything for the card,” a local Muslim told Frontier on condition of anonymity.

Some Rakhine Buddhist residents of Kyauknimaw said immigration deputy director-general Shein Win had pledged at his meeting in the village on November 27 to investigate the immigration officers who issued cards that incorrectly identified people as Kaman. They claimed there was still no progress in the investigation.

Minister of Labour, Immigration and Population U Thein Swe referred to the controversy over the cards in comments to reporters at an event in Nay Pyi Taw on October 31 last year.

“We’ve been investigating the family histories to see whether they are true Kaman or are of mixed blood, between Kaman and Bengali,” Thein Swe said. “What I want to say is that we gave [citizenship cards] to those who are eligible to be citizens. Now we’re re-checking their race. We’ll let you know if we find out more.”

The checks would take time, he added. “Although 3,000 or so people is not that much, it can’t be done within one or two months.”