The monks with no monastery

Monks who participated in the protests known as the Saffron Revolution nine years ago have endured persecution and poverty, and many have had to resume their lives as laity.

FOR THE past three years, U Zawana has lived in simple quarters made from recycled building materials in the grounds of a shuttered monastery near Thanlyin Bridge in Yangon’s Thanlyin Township.

The walls of his kuti, the term for a monk’s quarters, were fashioned from four kinds of materials. The eastern wall was made from bamboo, the western from plywood, the southern with scraps of wood and the northern, with vinyl.

“It was built with pieces of wood left over from the construction of the main building in the monastery,” said U Zawana, also known as U Zin Mote Sate (the bearded monk).

The spacious main building is just 5 metres (16 feet) away. It was closed by the junta in 2007 because of U Zawana’s role as a leader of the monk-led protests in September and October of that year known as the Saffron Revolution.

The sayadaw of the monastery was also a protest leader. He too lives on the site, in a similarly makeshift room.

The catalyst for the protests was an unexpected decision by the junta to remove subsidies from fuel that contributed to a sharp rise in living costs. The protests, among the biggest seen since the national uprising in 1988, attracted broad popular support until they were harshly repressed, leaving up to 30 people dead. 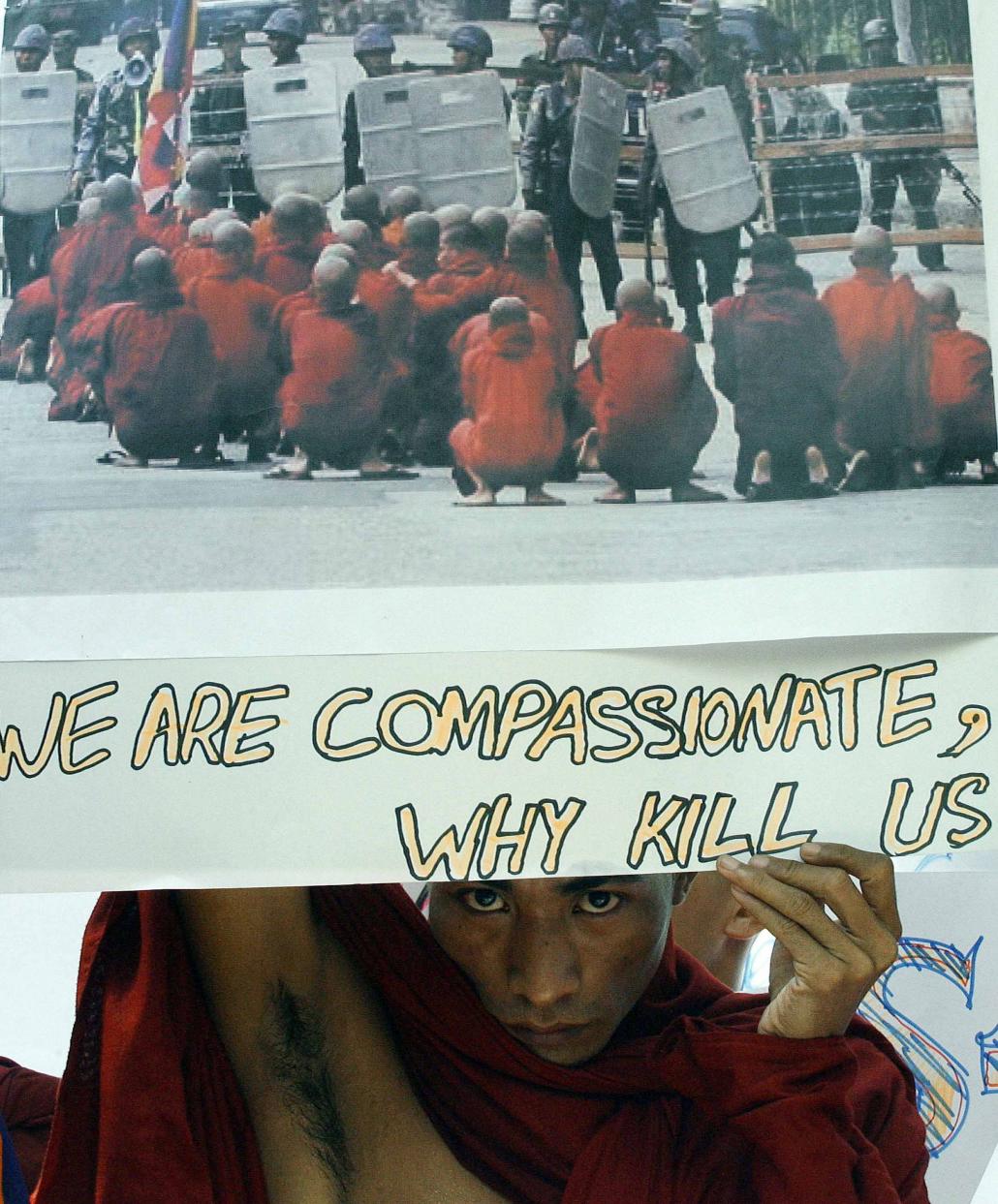 A monk holds a poster during a demonstration outside the Myanmar embassy in Colombo, Sri Lanka, on September 27, 2007. (AFP)

The protests and the role that monks played in them deeply unnerved the junta and some believe they played a important role in hastening the change towards a civilian government, though the roadmap for the transition to democracy had been unveiled four years earlier, in 2003.

Monks who played prominent roles in the protests have endured difficult times since 2007, when many of them were jailed. U Zawana received a lengthy prison sentence and was released in 2010.

He was among the first of the Saffron Revolution monks to be freed but after regaining his liberty found that no monastery in Yangon would dare to accept him.

“Every monk who came out of the prison had to struggle hard. They were not able to return to their monasteries,” said U Zawana.

According to figures compiled by the Saffron Monks’ Network, about 1,500 monks were arrested in the crackdown on the protests, of whom 282 were jailed.

Military tribunals sentenced the monks to terms ranging from two years to 55 years. All of the monks were released in an amnesty granted by the U Thein Sein government in 2013, but many carried mental and physical scars from their treatment in prison.

Of the five leaders of the Saffron Revolution, two suffered from mental illnesses when they were released, said U Aung Kyaw Kyaw, from Magway Township, who participated in the protests and is the elder brother of one the most persecuted monks, the former Sayadaw U Gambira.

“Sayadaw U Thumana from Mandalay never recovered from his mental illness and to the best of my knowledge is still randomly walking the streets,” he said.

In October 2008, U Gambira was sentenced to 68 years in prison, reduced on appeal to 65 years. The torture he suffered in custody has been well-documented and he suffers from severe mental illness. 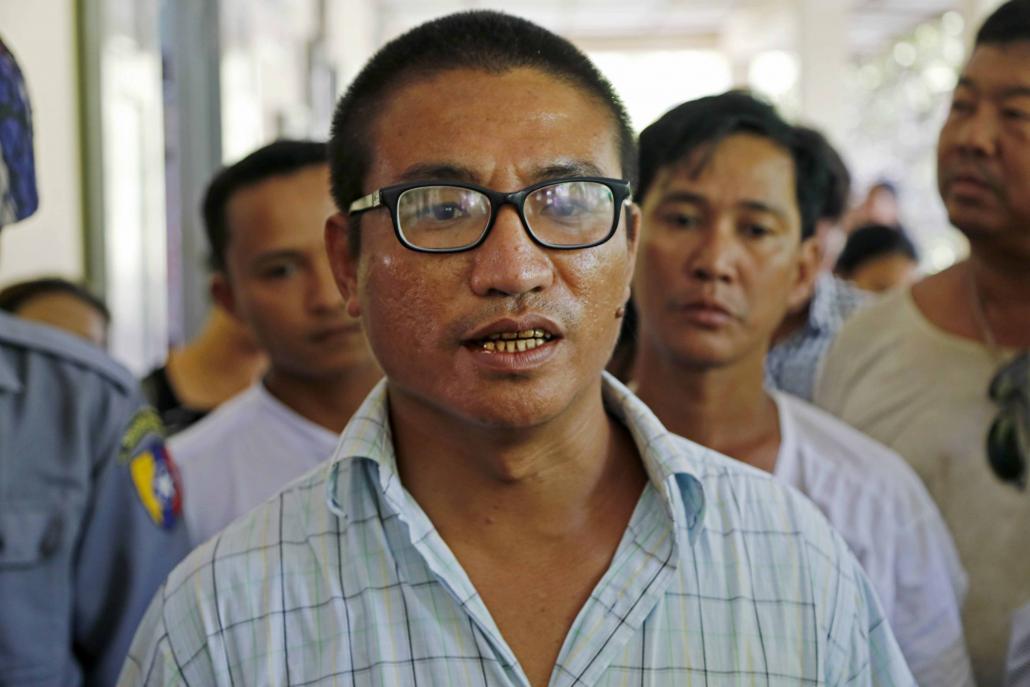 U Nyi Nyi Lwin, a former monk, walks out of a Mandalay court on April 26. As U Gambira he led the 2007 protests against the military government. (AFP)

After being released in a mass amnesty in January 2012, U Gambira disrobed and went to Thailand, where he received treatment for his mental illness.

After he returned to Myanmar in January 2016 the persecution continued. He was arrested for illegal entry under his lay name, U Nyi Nyi Lwin, and formally charged at a Mandalay court on March 10. After a series of court appearances during which he was denied bail he was sentenced to six months’ imprisonment in April.

A few days before he was due to be released on July 1 he was transferred to Yangon’s Insein Prison. He was charged in Bahan Township Court on June 28 with trespass and criminal mischief over incidents in 2012 when he led monks into monasteries that had been closed since 2007. His trial continues and if convicted he faces up to another three years in prison.

Other monks who participated in the Saffron Revolution came under intense pressure to leave the monkhood.

“Most of the monks involved in the protests were young. They were not sayadaws in charge of monasteries and after they were released most could not resume living at monasteries,” said U Sanda Thiri, who served four years of an 11-year sentence for his role in the protests.

As well as having nowhere to live, the monks have been unable to continue formal studies of the Buddhist scriptures. “When monks sit for their examinations they have to fill in forms that include naming the monastery where they live. As they are not living at a monastery they cannot sit the examinations,” said U Pyi Kyaw, a member of the Saffron Monks’ Network whose ordination name was U Vandavimsa.

The main reason why monasteries refuse to accept monks involved in the protests is because they are monitored by agents from Military Affairs Security. Elder monks sitting peacefully in meditation do not like being watched by military intelligence, said U Sanda Thiri.

U Parkata, who served four years of an 84-year sentence imposed by a military tribunal for his role in the protests, is among the monks who had had difficulty finding somewhere to live. He was shunned by monasteries and relatives after his release, including the abbot of a monastery whom he regarded as an uncle.

Pyi Kyaw said about 40 monks had disrobed because of the ostracism. 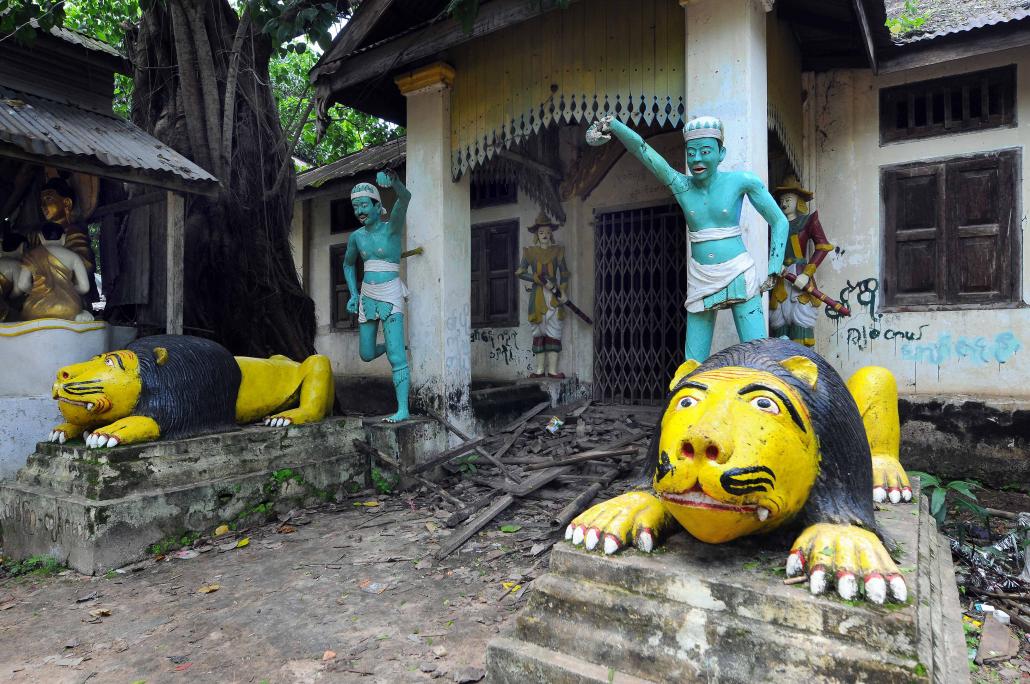 A monastery in Thanlyin Township that was closed by the military regime due to its residents’ involvement in the 2007 protests. (Steve Tickner / Frontier)

Monks launched the protests in September 2007 out of concern over the impact on the cost of living of the withdrawal of fuel subsidies the previous month that saw the price of petrol and diesel jump by up to 100 percent, and compressed natural gas by 500 percent.

“Monks became aware of the difficulties that the people were facing when they were on their morning rounds to accept offerings of food,” said Pyi Kyaw.

The first protests over the rise in living costs in August 2007 involved civilian activists, including members of the 88 Generation movement, and resulted in 13 arrests.

Tensions escalated sharply after security forces detained and mistreated three monks during a demonstration at Pakkoku, in Magway Region.

After the junta ignored a demand to apologise, monks in increasing numbers began marching peacefully in Yangon and Mandalay and elsewhere throughout the country. As they marched the monks chanted the Metta Sutta, the sutta on loving kindness.

On September 24, tens of thousands of monks marched in Yangon in the biggest protests in the city since 1988. On September 26 the junta declared dusk-to-dawn curfews in Yangon and Mandalay and launched the crackdown, which included violent raids on monasteries. The official death toll was 13, including monks, but unofficial accounts said scores of people died.

In May 2008, a few days after Cyclone Nargis left a trail of death and devastation across the Ayeyarwady Delta, the military went ahead with a referendum on the 2008 Constitution that it claimed was approved by 93 percent of voters.

The referendum was a key element of the seven-point roadmap for a transition to a “discipline-flouring democracy” unveiled in 2003 that led to a general election in 2010. The junta was replaced the following year by the Thein Sein government, comprised of former generals.

The monks who played a leading role in the protest have been dispersed throughout the country and their role in one of the most important events in the nation’s political history has gradually faded away.

Aung Kyaw Kyaw said that because of this the Saffron monks have been replaced as a political force by Ma Ba Tha. Better known as the Association for the Protection of Race and Religion, the nationalist group supported the Union Solidarity and Development Party in last year’s election and has been widely accused of fomenting anti-Muslim sentiment.

This month marks the ninth anniversary of the Saffron Revolution but the monks who participated cannot afford to host a ceremony to mark the occasion.

“We are having so much difficulty,” Pyi Kyaw said, “finding the money to arrange meals for monks to mark the ninth anniversary and to transport them to the ceremony.”

Top photo: U Zawana sits in his modest quarters in Yangon’s Thanlyin Township. The makeshift 100-square-foot room is just 5 metres from a much larger monastery building that remains shuttered due to his role in the 2007 protests. (Steve Tickner / Frontier)