The monk in blue robes

It was after Ashin Nyar Na, 77, had ordained as a monk about 40 years ago and studied the three books of Buddhist teachings known as the Tipitika that be began to have doubts about his beliefs. They were a radical departure from the Theravada Buddhism that predominates in Myanmar and have cost him dearly in terms of freedom.

When he was released from Myitkyina jail under presidential amnesty in January he had spent almost 16 behind bars. It was his third prison sentence. A comment on social media said his jail terms stand as a powerful symbol of the state of religious freedom in Myanmar.

The unorthodox monk who has been prepared to spend 16 years in prison for his beliefs lives in a simple concrete building at his threadbare monastery in a rubber plantation on the bank of the Zalathaw Dam near Bago, a three hour drive from downtown Yangon.

He is constantly watched by government agents.

When Ashin Nyar Na speaks it is easy to understand why he has upset the Buddhist establishment and especially the State Sangha Maha Nayaka Committee, the state-appointed supreme body known in Burmese as the Mahanayaka that represents the community of monks, or sangha.

“I realised that the Buddha that the people know is not the real Buddha,” he told Frontier, recalling the thoughts that stirred in his mind during the 1980s. “So, I had to try to know the real Buddha.”

With another monk of like mind, they drafted a thesis based on their studies of the Tipitika and submitted it to the Mahanayaka. It rejected their thesis and ordered them to recant. They refused and took the dispute to another level by abandoning Theravada Buddhism in favour of belief in what they called “Present Karma Buddhism”. In 1983, Ashin Nyar Na began wearing blue-coloured robes to set himself apart from monks who are either Theravada or Mahayana, the form of Buddhism that predominates in North and East Asia.

Being ostracised from mainstream Buddhist society was difficult for his friend.

“I heard that my friend asked the Ministry of Religious Affairs to accept him back as a Theravada monk,” said Ashin Nyar Na. It was after his friend left that the arrests began.

Ashin Nyar Na was arrested the first time a year after he started wearing blue robes and was sentenced to 10 years in prison but released after seven-and-a-half years. His second arrest resulted in a three-year prison term, of which he served two-and-a-half years. He was most recently arrested in February 2010 and sentenced to 20 years, spending six years in prison before his release under amnesty early this year.

There was no benefit to be gained from using the fear of hell to threaten or the hope of attaining angelhood to flatter, he said. “The best thing is to speak the truth.”

Each arrest followed charges brought by the Mahanayaka under Sections 295 and 295(a) of the Penal Code, for damaging a place of worship with the intention of insulting religion and “deliberate and malicious acts intended to outrage religious feelings”, respectively. He was also charged under the notorious Section 5(j) of the Emergency Provisions Act for behaviour deemed a threat to national security for having imitated a monk, he said.

A core difference between Ashin Nyar Na’s beliefs and Theravada Buddhism is whether life continues after death.

The Buddha had expounded on this concept about 20 times, he said.

It is popularly believed in Theravada Buddhism that the Buddha knows everything because he possesses superior knowledge. “But if the Buddha had a computer he would have to learn how to use it,” Ashin Nyar Na said, adding that he did not believe the Buddha had supernatural powers.

He also has unorthodox views about going to hell as a consequence for a bad behaviour. Theravada Buddhism teaches that bad behaviour in this life will result in a person starting their next life in hell. Ashin Nyar Na’s concept of hell is different.

“All beings are composed of cells,” he said. “If someone does a bad thing, the echoes and traces linger in cells. He or she can’t regain the cells they had before they did something bad and the traces will always affect his or her life directly or indirectly. That is living in hell.”

He refuses to believe in nirvana and suffering in hell after death. Nirvana and hell affect the living and do not occur in the afterlife, he said.

Ashin Nyar Na’s views about hell have been criticised by Buddhists who say that belief in the concept of punishment after death for those who have been bad benefits society by encouraging good behaviour.

There was no benefit to be gained from using the fear of hell to threaten or the hope of attaining angelhood to flatter, he said. “The best thing is to speak the truth.”

Ashin Nyar Na slowly and steadily outlined his ideas and beliefs in an interview lasting more than two hours. They had developed from reading tracts on the Dhamma, discussions with knowledgeable senior monks known to be well-versed in the Dhamma and from his own practise, he said.

Frontier asked why he had explored new ways of thinking when most other monks adhere to tradition. “I have been honest,” he said, adding that a curious mind had driven him to question much of what was accepted without thinking by most Buddhists.

One of his followers, who asked not to be named, said it was not surprising that some Buddhists see Ashin Nyar Na’s beliefs as a threat to traditional beliefs and practice.

“The people donate offerings to the monks because they believe they will be rewarded in their next life,” the follower said. “If they were aware of Sayadaw’s [Ashin Nyar Na’s] doubt about a continuing existence after their worldly lives, they would be unlikely to give offerings to monks any more.” 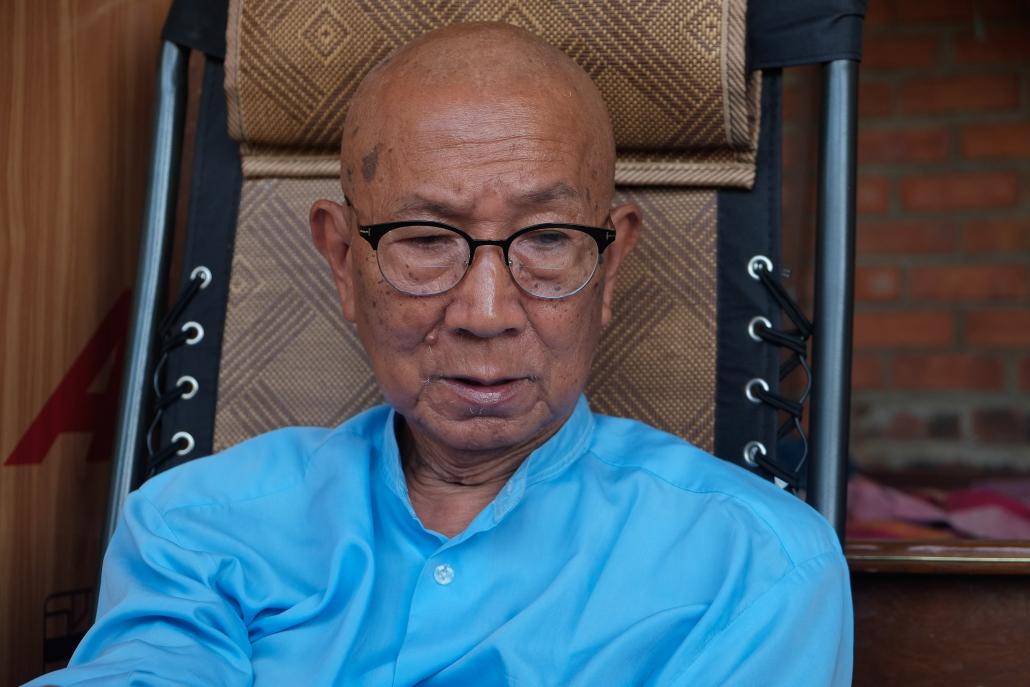 Despite his unorthodox views, Ashin Nyar Na has more than a thousand followers, including some prominent lay Buddhists, as well as monks who admire him in secret.

He has written extensively and copiously about his Dhamma concepts but his books cannot be legally published. They are available on the internet and for restricted distribution to his followers for study purposes.

Ashin Nyar Na has no interest in forming a sect and wants to be left alone and be allowed to propagate his ideas. He uses Facebook to teach and answer questions about his concepts.

“If the internet had existed in the Buddha’s time, he might not have needed to form the sangha to propagate his teachings,” he said.

He is optimistic that the change to a government elected by the people will bring a better future for Myanmar.

He is also hopeful that the incoming government will return land donated by followers to establish his monastery. It was confiscated when he was arrested.

Fear pervades his followers. They asked Frontier not to publish this report until after the change of government despite an exclusive interview having been arranged a week after he release from prison in January. The military government had repeatedly arrested Ashin Nyar Na without reason, they said.

A reason for their concern is the plainclothes Special Branch agents lurking near the dusty entrance road to the rubber plantation that shelters the monk’s simple monastery, known as Dhamma Viharri, or “Abode of the Dhamma”.

It was nearly dark when Frontier left the monastery. The trip out through the plantation was not the same as the trip in. The road had been blocked by bamboo poles. It was a message from those who do not want Ashin Nyar Na to receive visitors.