The meaning behind Myanmar names

A brief explainer about how Burmese names are decided.

MYANMAR PEOPLE typically greet visitors to the country in a friendly manner, but some foreigners – especially those who have recently arrived – can struggle to remember local people’s names. Compared to in other cultures, Myanmar names can be long, often using similar-sounding words numerous times; if you’re not familiar with the language, it can be a challenge.

To try to help some of our readers better understand this process, Frontier spoke to Ma Moe Pwint Chit, managing director and teacher at Moe Myanmar Language Centre.

What’s in a name?

Honorifics are important in Myanmar culture, and are typically used before the name.

For Bamar people, which make up the majority of the population, for males the honorifics are “Maung”, which means “younger brother”, “Ko” for “older brother” and “U” for “uncle”. “Sayadaw” is also used for someone who has been ordained as a Buddhist monk, while “Bo” is similar to the English use of “Sir” and is often adopted by active or former military men.

A 1961 document about Myanmar names, published by America’s Central Intelligence Agency, said that a Bamar male retains the Maung until he graduates from high school.

“Then or upon his entrance at the university he drops the Maung and assumes the title Ko,” the document said. “The Ko is retained until his graduation from the university when it drops it to assume the title U.”

But Moe Pwint Chit said that daily practices do not necessarily follow the theory. For instance, for Bamar women, honorifics are generally “Ma” for young, unmarried girls, and “Daw” for older, married women. But it is not a set rule, and often depends on the circumstances in which one is speaking.

For example, a young, professional single woman may be referred to as Daw, while a businessman may prefer to be called U in front of a co-worker, but switch to Ko if speaking to an associate who is older.

Myanmar’s ethnic minorities also have their own honorifics. For example, Moe Pwint Chit is part Shan, and sometimes uses the honorific “Nang” in front of her name (the honorific for an older Shan male is “Sai”).

Try the short quiz below: 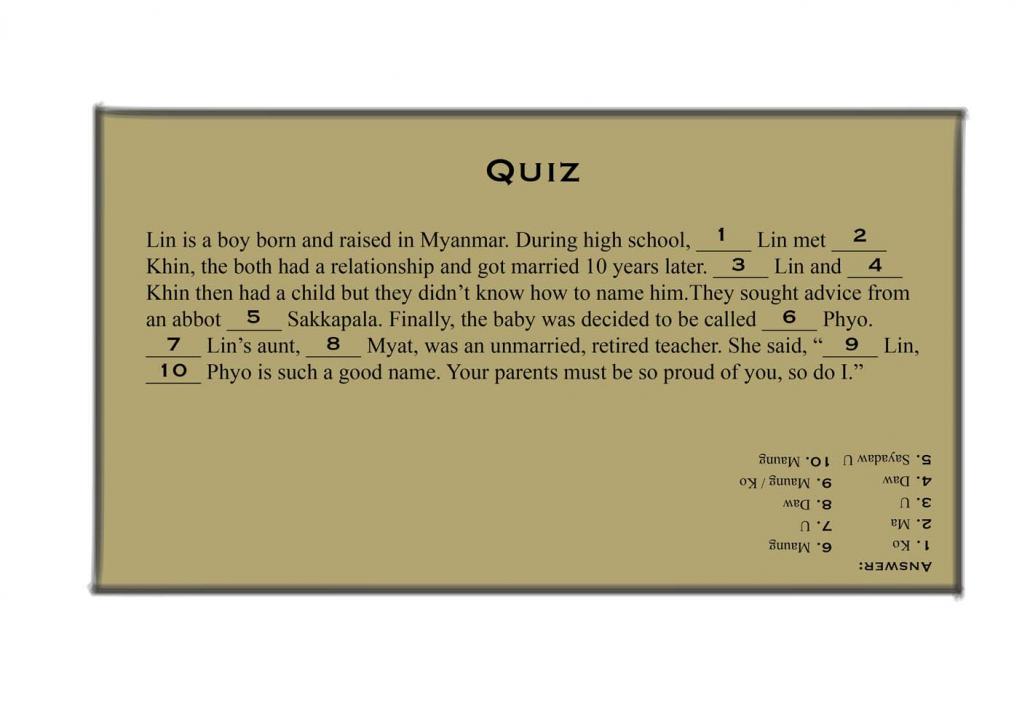 There is no set rule about how many words there should be in a Myanmar name, but the number typically varies between one and five.

Often the name that is most important is the first name, and usually refers to the day of the week when one is born. See the chart below:

Moe Pwint Chit was born on a Thursday, which is why her name begins with an M.

The start relies on the stars, but humans decide the rest.

“Every name carries a meaning,” said Moe Pwint Chit. It could be about luck, success, gold or prosperity, she said.

Moe Pwint Chit is her full name, but in casual situations, her friends may call her Moe Pwint, Moe Chit or Pwint Chit. When she first met Frontier she introduced herself simply as Moe.

Mixing traditions with the modern world

Things are constantly changing though. For example, some families in Myanmar have started creating patronymics. In the case of Moe Pwint Chit, all of her siblings share the word “Chit” in their names, which comes from their father. The start of State Counsellor Aung San Suu Kyi’s name is taken from her father, independence hero Bogyoke Aung San.

It is also common for people to create western names. In a TED talk delivered in 2015, businesswoman Ma Shwe Sin Win said she adopted the English name “Cynthia” when she moved to Australia to pursue an MBA. In the speech, which was titled “Not good with names: Local name customs in a global village”, Shwe Sin Win said that she chose the name because, phonetically, it starts with an “S”.

While Myanmar people sometimes try to blend local traditions into English names, there will always be differences between Myanmar names and their Roman equivalents. For example, the names Win, Winn, Wyn and Wynn all refer to the same “ဝငျး”. On the other hand, one Roman character may correspond to multiple possibilities of Myanmar characters. For example, the Roman Z is used to represent both “ဇ” and “ဈ” consonants.

It is common for people to have names that are identical – this happens in the Frontier office, for example – and a solution to this is sometimes to fill in the father’s full name in official documents, Moe Pwint Chit said. In classrooms, teachers will sometimes identify students with the same name by numbers, in order to differentiate them.

The lack of surnames can cause issues when filling out application forms, for a new passport, for example, or when registering for a Facebook account. Myanmar people often deal with this issue by dividing their name into two.

In search of the best

The name of a newborn is traditionally written on a palm leaf manuscript called a zata. The zata is folded into a handy packet to act as a birth certificate.

For many Myanmar people, what happens to you throughout your life is due to your name. Sometimes if someone has a bad run of luck – falling ill and losing a significant amount of money, for example – that person will change the name in the hope that doing so will improve their fortune.

Whether a person’s name is decided by an astrologer, a monk, aunts or uncles, or a parent, the hope is that the name will contribute to that person having a healthy, successful life.