The Mandalay sculptor with a passion for lighting creative fires

ONE MORNING about eight years ago, residents of Mandalay’s 37th Street awoke to find a gigantic nude woman on a rooftop.

The contemporary sculpture, of a 6.4 metre (21-foot) woman holding her mouth in her hands, was created by Suu Myint Thein, a professor at the State School of Fine Arts (Mandalay). It had been shunned by government censors and was collecting dust in Suu Myint Thein’s classroom, to the chagrin of his friend and patron U Ai Lone.

For weeks, Ai Lone slowly lined his property with Suu Myint Thein’s smaller nudes, finally convincing the city government to leave the statues in place as long as they remained on private property. With that precedent, Ai Lone and Suu Myint Thein rented a crane truck and, in the dead of night, installed the giant nude on to the roof. 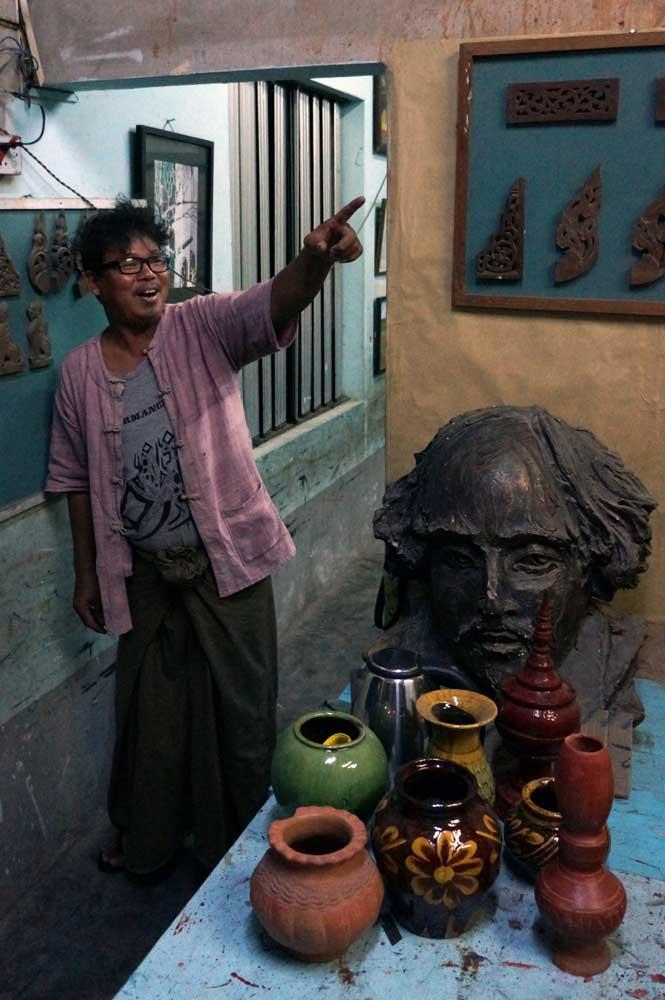 Suu Myint Thein’s students practise the fundamentals of line, colour and composition in classrooms lined with abstract and impressionist paintings. Some shelves are crammed with traditional images of the Buddha; others sport strange and experimental forms in bronze, clay, plaster and teak.

Alin Dagar, which has more than 100 students, is Mandalay’s only private art school. In a city famous for its lavish monasteries and traditional architecture, the school is one of Mandalay’s only holdouts for modern art.

“There are traditional artists and artists practising realism, but contemporary art is mainly in Yangon,” Suu Myint Thein told Frontier.

From one perspective, Mandalay is one of Myanmar’s most artistic cities and is widely regarded as the country’s cultural capital. King Mindon built the city from scratch in 1859, intending it to be the paragon of his dynasty’s tradition and culture. The city’s royal palace and monasteries host some of the finest examples of Myanmar painting, sculpture, architecture and design.

But for a contemporary artist, the city is frustratingly bound to its own legacy, said Suu Myint Thein. Most of its working artists use realist styles to paint typically “Mandalay” subject matter, such as pagodas, monks, boats, the royal palace and the U Bein Bridge.

“Most of the other artists and teachers here in Mandalay are into realism, and also when they teach it is very [linear]: ‘Step one, step two, step three,’” Suu Myint Thein said. “But everyone’s talent is different and the way they absorb knowledge is different.”

Students at Alin Dagar (which means “the light through the door”) learn fundamentals like perspective and composition, but Suu Myint Thein and his assistant teachers work closely with each student, rearranging the curriculum according to their needs and desires.

Ma Khin Le Swe enrolled in the school to learn the technical fundamentals of art so that she can work with her sister, who runs a design business. She said Alin Dagar differs from typical Myanmar classrooms, which emphasise strict order and repetition. “When we paint here, we have a peaceful mind. We can concentrate on creating.”

Suu Myint Thein said the abstract, cubist and surrealist works that decorate his school are not necessarily superior to more realistic and traditional paintings, but they express curiosity, confidence and a willingness to push boundaries – qualities too often missing in creative expression after decades of suppression by military regimes.

Born to a Shan family in Kachin State, Suu Myint Thein enrolled in the Mandalay State School of Fine Arts in 1988, where he fell in love with the work of artists such as Jackson Pollock, Marcel Duchamp and Auguste Rodin. He joined the academic staff and became a professor and was eventually appointed the school’s head of sculpture.

Ai Lone met Suu Myint Thein about 15 years ago. He and his wife were home-schooling their six children, which so impressed Suu Myint Thein that he agreed to tutor them for free.

“Every time he got the fire [and] he wanted to do something, he would just do it,” said Ai Lone. 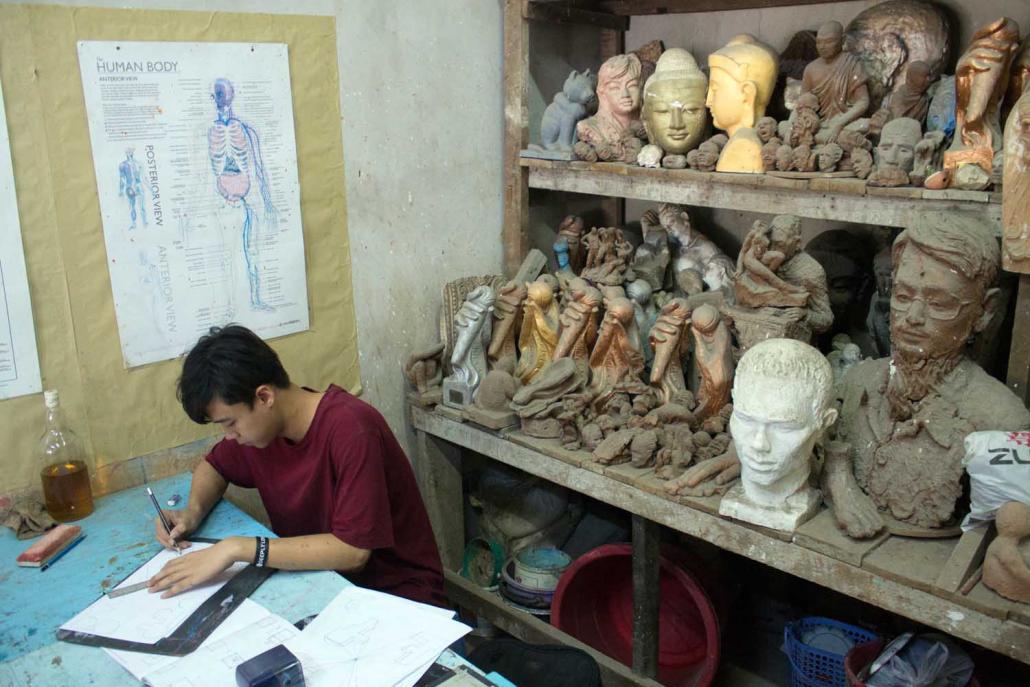 Despite being regarded as Myanmar’s “capital of culture”, there is limited space for contemporary artists in Myanmar’s second biggest city. (Jared Downing | Frontier)

Ai Lone described a man driven entirely by passion. The State School of Fine Arts in Mandalay had no art history program, so Suu Myint Thein developed one himself, in his own time. He had a comfortable income, but would pour what he earned into his latest projects, only to have them rejected by the school or government officials.

He poured years of money and work into what would have been the first contemporary sculpture exhibition in Mandalay. It was to feature the large female nude and smaller sculptures in the same style, but a few days before the exhibition was to open, government censors banned the venue from showing his work. 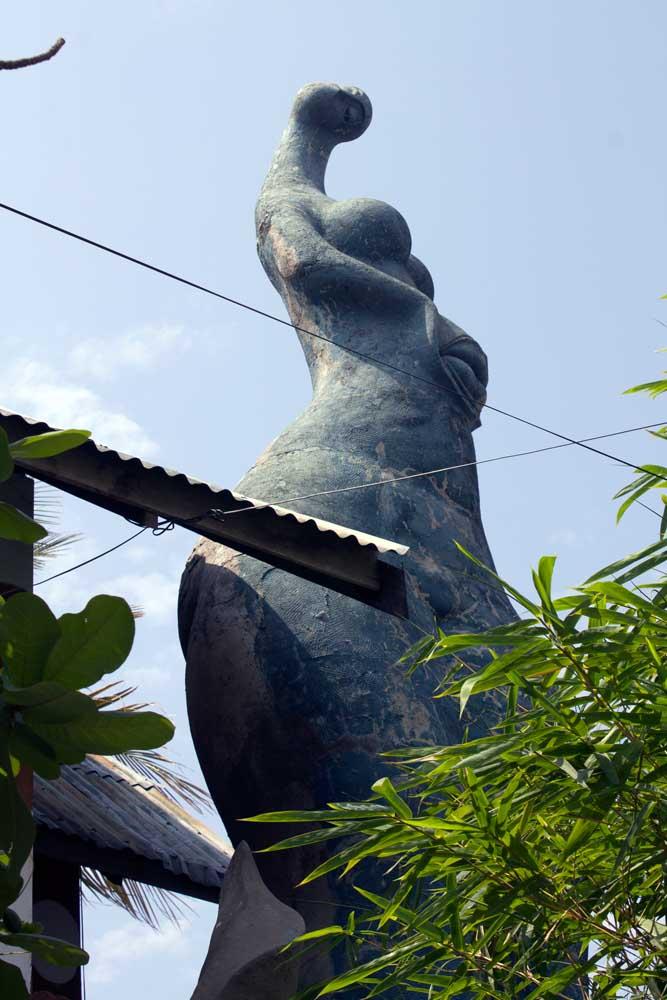 The nude statue on the roof of the Mandalay Contemporary Art Centre. (Jared Downing | Frontier)

“He dreamed of having a modern art exhibition in Mandalay,” Ai Lone said. “He planned for it for four, five years, and paid for it all himself … Then they told him, ‘You can’t have this exhibition.’ Why? ‘Because of that big woman. Why did you build a woman that big, that strange? Why does everyone have to look up at her? This must be Aung San Suu Kyi!’”

The decision to ban the exhibition all but broke Suu Myint Thein’s spirit, Ai Lone said. For a time, he produced little new work and his sculptures sat idle at the school; the alleged Aung San Suu Kyi statue was promptly covered up when officials came to visit.

When he was eligible to retire in 2008, the school asked Suu Myint Thein to stay, but Ai Lone begged his friend to leave the public sector, promising to co-found his own art school.

The installation of the giant nude statue on the roof was not in vain, said Ai Lone.

“‘For the first year, we had many accidents in front of our house,” he said, laughing. “People would say, ‘This crazy guy is shaming us!’ But after one year, they started to ask about the proportions, the positions: ‘What’s this for? What does it mean?’”

In 2012, Suu Myint Thein launched a travelling exhibition called “Colourful Light” that gave children in rural villages the opportunity to see works of art created by other children around the world. “I wanted children of villagers to know about art,” Suu Myint Thein said.

“At first I thought that idea was nonsense,” said Ai Lone. “But he was the teacher of my family, so I volunteered to put everything in my car and we went to Shan State, Hsipaw.”

With nothing to do, Ai Lone sat at the back while Suu Myint Thein showed the children paintings from such countries as Mongolia, the United States, Ukraine and Britain.

“When the children from the countryside saw the paintings from America and England, they said, ‘Oh, I can do that! I can do better than that!’ And they all got on the floor, with all this paper and colours. All these children who had never drawn before,” Ai Lone said. “I got a little moved, really. From that very first show, I thought, ‘Oh, this really did something.’”

To Suu Myint Thein, art isn’t really about tradition or innovation. It is about freedom, curiosity and the confidence to explore one’s self.

“Not every student has to become an artist. The most important point is to cultivate an artistic feeling,” said Suu Myint Thein.  “The Myanmar people, they have this already in them, but you just need to open it up.”