The government and armed groups enforce a new border regime

The safe return of migrant workers from Thailand amid the pandemic has required an unprecedented degree of cooperation between the government and armed groups on policing the border.

The COVID-19 pandemic has put many people out of work in Myanmar, from garment workers and vendors to journalists and taxi drivers. Another group suddenly without income are the “brokers” who arrange for undocumented migrants to cross into Thailand at the many unofficial border gates run by ethnic armed groups in Myanmar’s southeast.

During normal times, there is a steady flow of migrants at these crossings. People cross to access better-paid jobs in Thailand and return to check on families and farms, to invest savings in land, property and small businesses, and to pay off debts – all without having to comply with the cumbersome and expensive requirements set by the Memorandum of Understanding between Thailand and Myanmar on labour migration.

But in recent months, these border crossings have been shuttered, in an unprecedented show of pandemic-prompted cooperation between the government and armed groups, which have instead funnelled migrants towards the official crossings, particularly at Myawaddy in Kayin State.

Informal migration has not stopped completely; the border is highly porous in places, with remote terrain allowing people to cross outside of both government and armed group-controlled gates. But this tends to happen far from major travel arteries and mostly serves local trips over small distances.

Daw Khin Win makes a living recruiting people from villages in Kayin and Mon States to work in factories in the Thai town of Mae Sot, across the Thaung Yin (or Moei) River from Myawaddy. The factory work is informal and the migrants are not given a Thai work permit or any formal immigration status, so an important part of Khin Win’s job is to arrange for them to take illegal ferry crossings over the Thaung Yin each day. These crossings allow the migrants to bypass the official border gates at the two Thai-Myanmar Friendship bridges, where Myanmar citizens can pass for temporary visits to Mae Sot but without the right to work.

The crossings at Myawaddy, and the unofficial border gates they depart from, are nearly all controlled by the Kayin State Border Guard Force. Although this ethnic Karen armed group is formally under Tatmadaw command, it runs an independent business empire that includes large-scale commercial projects with Chinese investors.

In normal times, the 27 border gates controlled by the BGF provide it with a stream of illicit revenue from passing migrants – as well as from traders who use the gates and BGF-run warehouses to smuggle Thai-made goods, ranging from phone handsets to beer to motorcycles, into Myanmar without paying official duties.

The director of the Immigration Department for Myawaddy District, U Aung Khaing Swe, told Frontier these gates operated beyond state control. “We know about the BGF gates but have no idea how to control them,” he said. “We aren’t allowed to enter these areas without informing the BGF, but when we do tell them we are coming, the BGF clears the area before immigration officers can come and check.” 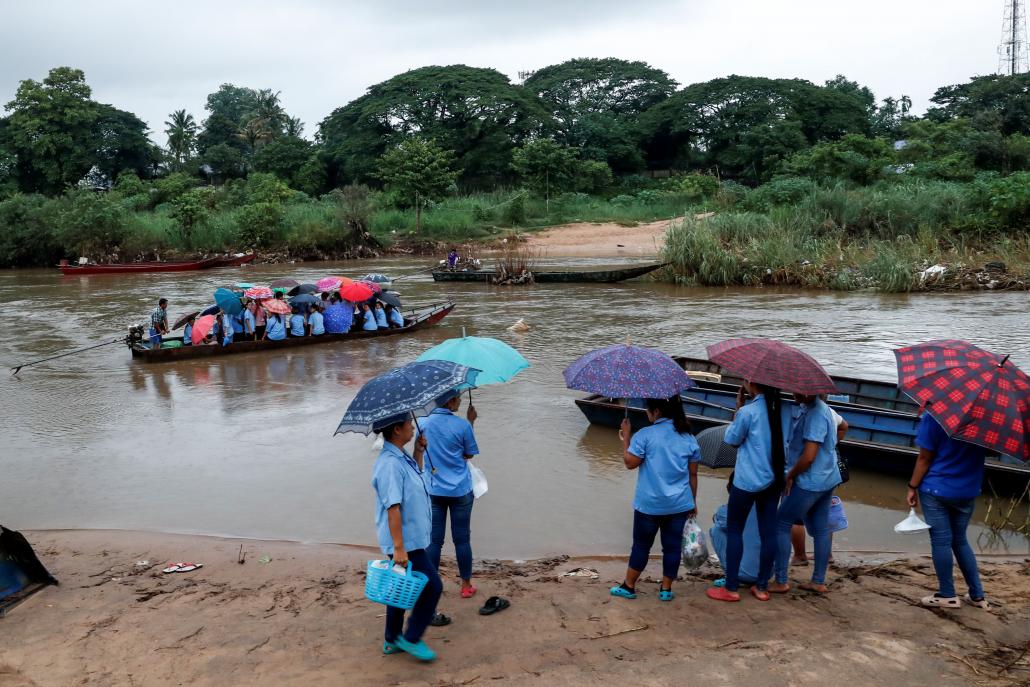 An informal border crossing at Myawaddy, seen before the pandemic in July 2019. This and dozens of other crossings allow migrants to bypass the official border gates at the two Thai-Myanmar Friendship bridges. (Nyein Su Wai Kyaw Soe | Frontier)

‘They had to find their own way’

In March, factories and other workplaces in Thailand started to lay off migrant workers because of the economic slump caused by the pandemic. This prompted tens of thousands of migrants to return to Myanmar through formal and informal channels. Khin Win said she arranged for workers she had hired to return using the BGF-controlled ferry crossings.

However, on March 29, six days after Myanmar confirmed its first case of COVID-19, the ferries were grounded. The factories continued to lay off workers, but Khin Win was unable to help them return.

By the start of April, even the official border crossings were shuttered. The government told migrant workers stranded in Thailand to wait till April 15 to return. After that date came and went, they said to wait until the end of the month.

“After the coronavirus was found in Myanmar, we couldn’t do our job because the government and BGF had strictly blocked the border crossings,” she told Frontier. “I’ve had to stop my work since then.”

“They had to find their own way of returning,” Khin Win said of the stranded workers, adding that some had been able to swim or even wade across the Thaung Yin, which is at its shallowest between March and May, the hot season before the monsoon rains.

However, these returns, which have largely happened at night to avoid detection, are risky given a new vigilance on the part of the BGF in policing the border.

BGF spokesperson Major Naing Maung Zaw said BGF soldiers had arrested about 50 people in April who were attempting night-time river crossings, and that they would continue to make arrests for as long as people tried to cross outside of the official gates.

Naing Maung Zaw said people who are caught are quarantined for 21 days at one of two BGF-run facilities, at Myawaddy and the group’s headquarters at Shwe Kokko, before being handed over to the Myanmar police. He said the police then charge them for violating the night-time curfew in place across Myanmar under section 188 of the Penal Code, which carries a prison sentence of up to six months.

“Since we are an organisation under the Tatmadaw, we collaborate with them where necessary,” said Naing Maung Zaw, adding that the need to work closely with the government security services to protect Myanmar from COVID-19 was more important to the BGF than the lost income from closing the group’s border gates.

“We take responsibility for ensuring migrant workers don’t cross the river using our jetties,” he said. “The decision to shut down the boat gates has affected our income but we can’t take any risk that could destroy the reputation of the BGF. If someone with coronavirus used our boat gate and it then spread, our force could be blamed.”

This cooperation has extended beyond May 1, when the No 2 Thai-Myanmar Friendship Bridge reopened to returning migrants. Since then, thousands of laid off migrant workers struggling to meet living expenses in Thailand have returned to Myanmar.

State Counsellor Daw Aung San Suu Kyi made it clear during an online meeting with the chief ministers of Tanintharyi Region and Mon and Kayin states on May 5, which was broadcast live on Facebook, that undocumented migrants who left the country via illegal crossings were welcome to return at the No 2 Friendship Bridge. “We will accept [the migrants] whether they are legal or illegal,” she said. State media on April 30 quoted the Myanmar labour attaché in Thailand as saying that a list of migrants who had registered with the embassy to return at Myawaddy included “illegal” migrants. 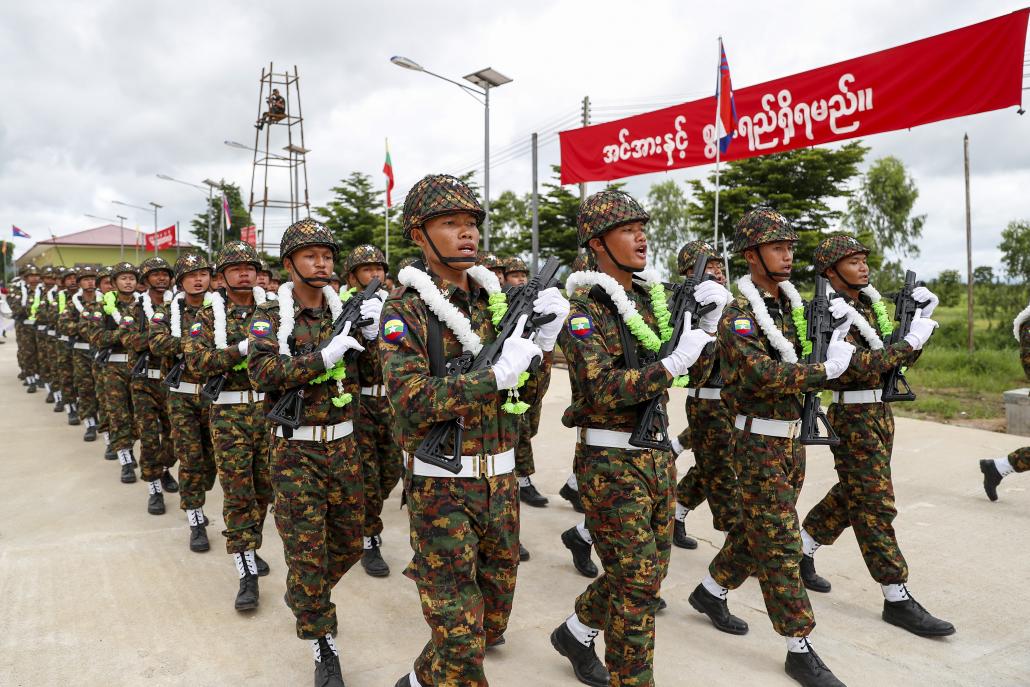 An earlier mass return of migrants from Thailand, which has reported more cases of COVID-19 than Myanmar, caught the government unprepared. There was chaos in Myawaddy as authorities struggled to screen the large numbers crossing the border in late March, and the migrants were unable or unwilling to follow orders to quarantine at home.

These scenes have not been repeated. Quarantining at home is no longer allowed and a nationwide network of quarantine centres – repurposed schools, universities and other public buildings – has sprung up since the chaotic returns in March, ready to receive returning migrants from the community for a mandatory 21-day quarantine period.

However, returns from Thailand for most of May were minimal, due to internal travel restrictions imposed under Thailand’s state of emergency that made it impossible for many of the migrants dispersed all over Thailand to reach the border.

More recently, the Myanmar embassy has arranged for chartered buses to take migrants from Bangkok to the border at Mae Sot and for migrants outside the Thai capital to be given travel passes. This, alongside a phased relaxation of restrictions and the resumption of some Thai bus services, prompted a substantial influx starting in the last week of May, with more than 1,000 returning through Myawaddy each day. By June 15, the number had reached 28,008. Migrants have also started returning at the official crossing at Kawthaung, at the southern tip of Myanmar in Tanintharyi Region, but in far smaller numbers.

But besides the expansion of quarantine facilities and more comprehensive health screening at the border, an important, though far less visible, ingredient in the relative success of these returns has been the shuttering of unofficial border gates. The effectiveness of screening and quarantine measures depends on migrants not being able to bypass the carefully plotted paths that the government has laid out for them from the official border crossings to their home communities. Here, the cooperation of the non-state armed groups that control and profit from unofficial gates has been indispensable. 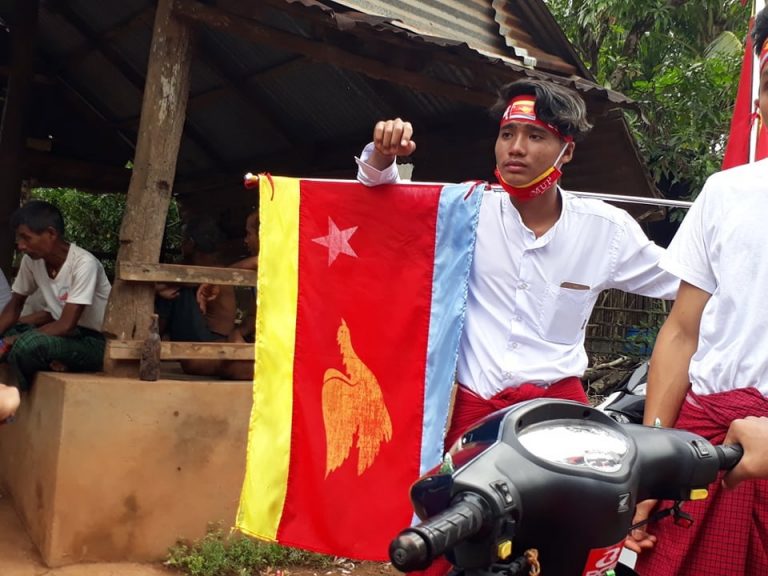 Despite some gains, early results indicate another poor NLD showing in Shan